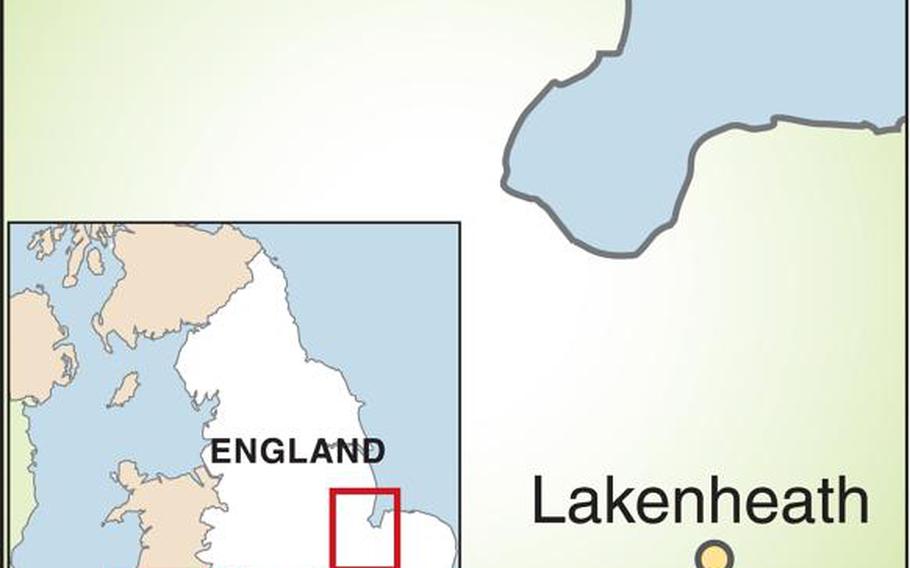 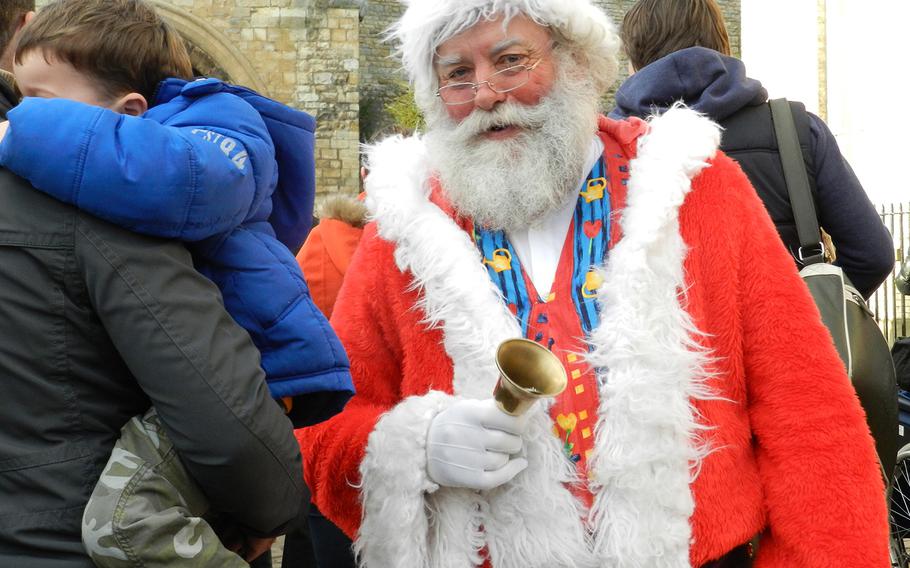 Buy Photo
A Santa look-alike mingled with the crowds at the Lincoln, England, Christmas market in 2012, to the delight of children and adults alike. (Pary Smith/Stars and Stripes) 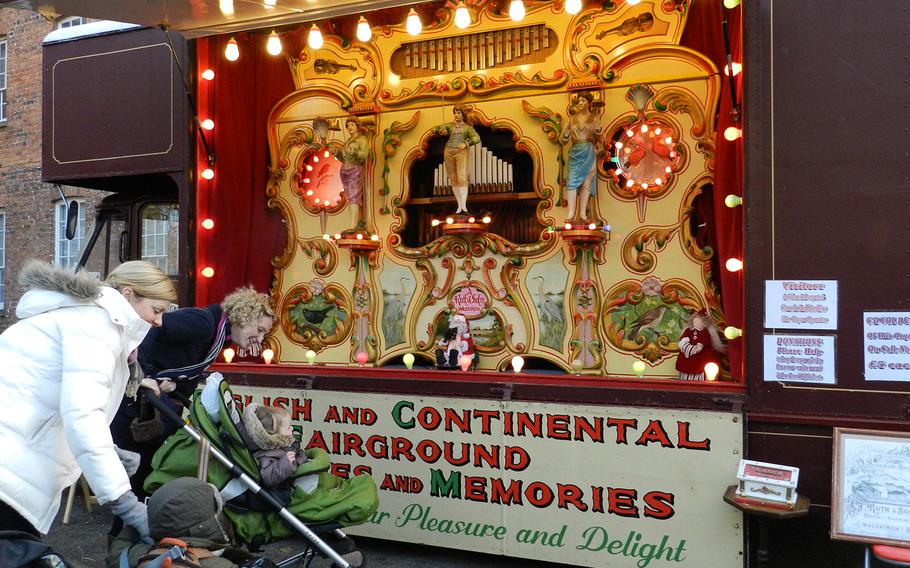 Buy Photo
A colorful calliope added to the festive mood at the Christmas market in Lincoln, England. (Pary Smith/Stars and Stripes) 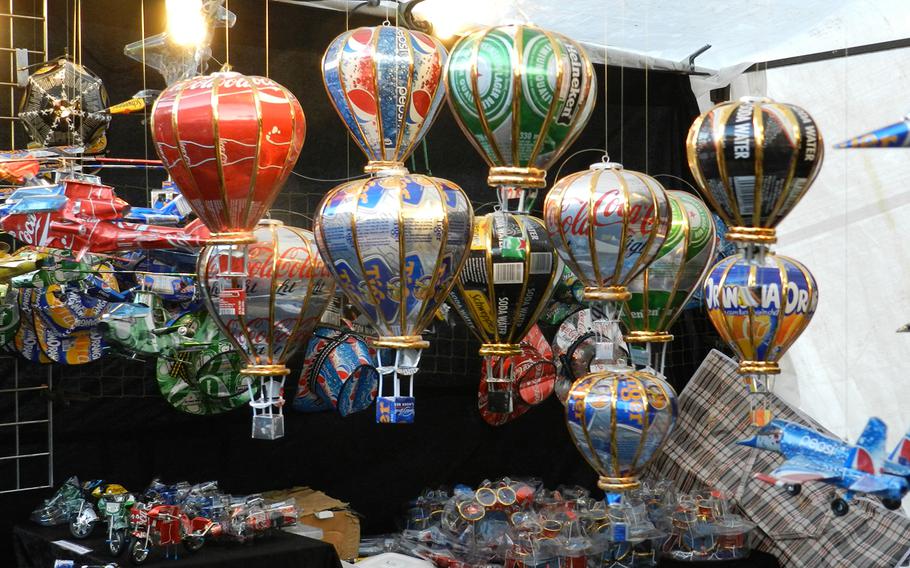 Buy Photo
Colorful tree ornaments made out of recycled aluminum cans were among the decorations sold at the Christmas market in Lincoln, England, in 2012. (Pary Smith/Stars and Stripes) 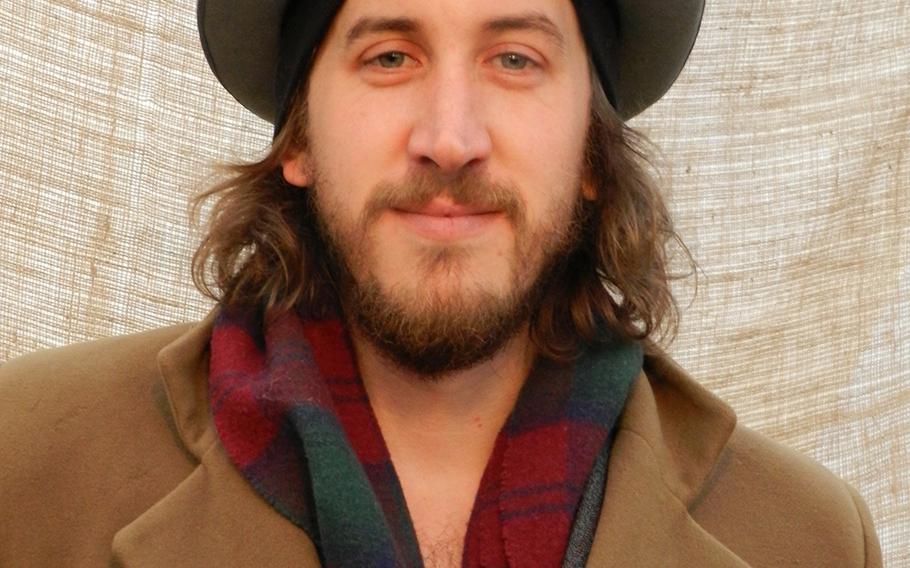 Buy Photo
One of the many vendors at the Lincoln, England, Christmas market who add a bit of charm to the event by wearing a top hat. (Pary Smith/Stars and Stripes) 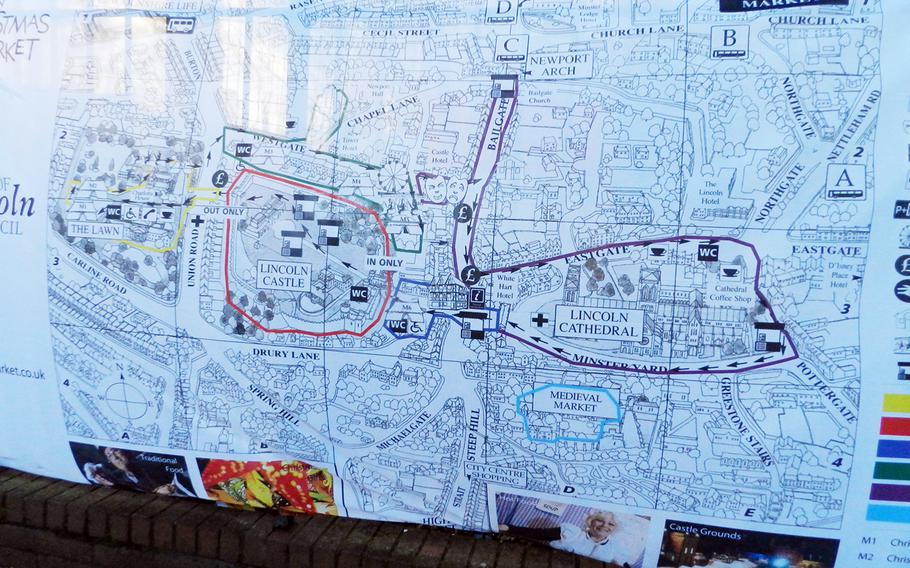 Buy Photo
A map illustrates the layout of the Lincoln Christmas market in England in 2012. (Pary Smith/Stars and Stripes) 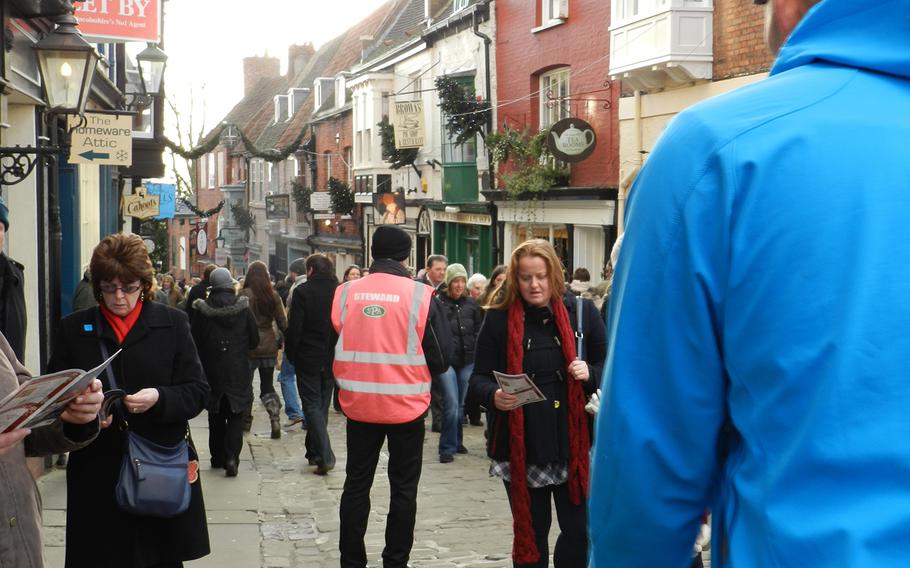 Buy Photo
Outside of the market's boundaries, pedestrians forget the one-way-only rule and stroll Lincoln's quaint old town streets. Many of the shops were open on Sunday. (Pary Smith/Stars and Stripes) 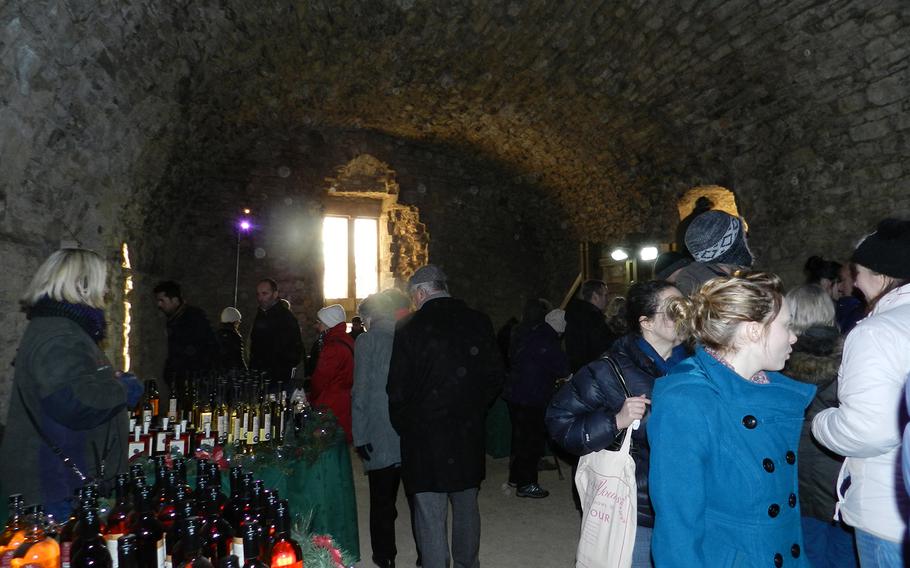 Buy Photo
Part of the medieval market in Lincoln, England, was held inside a stone cellar. Here, vendors offered wines, locally made jewelry and other items. (Pary Smith/Stars and Stripes) 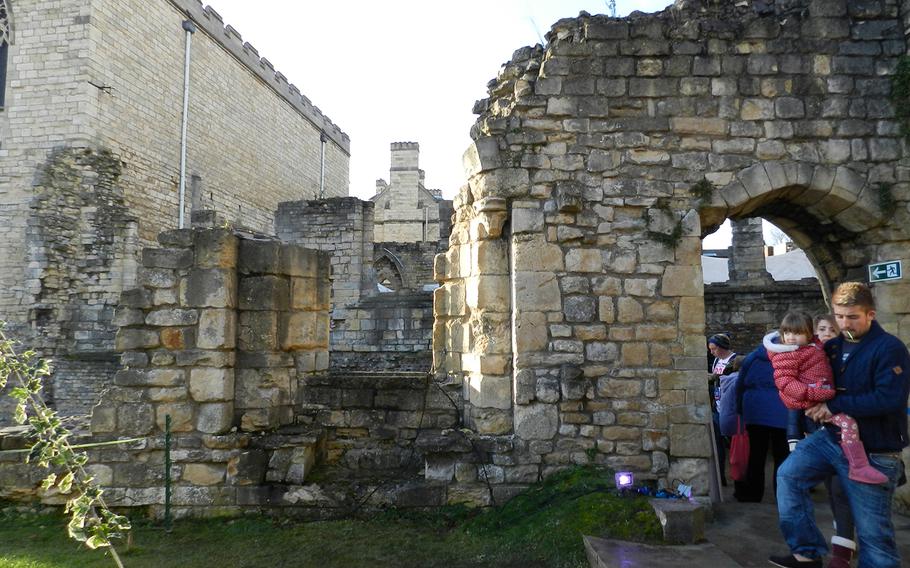 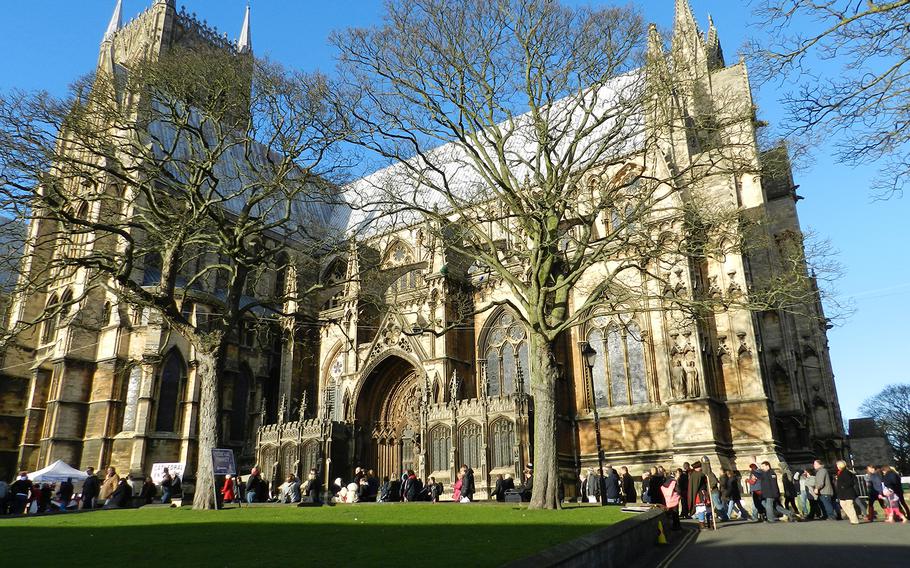 Buy Photo
Market-goers dutifully follow the one-way-only rules as they file past Lincoln's cathedral at the start of the town's Christmas market last year. The market website says the one-way rule has been dropped for this year's market, Dec. 5-8. (Pary Smith/Stars and Stripes) 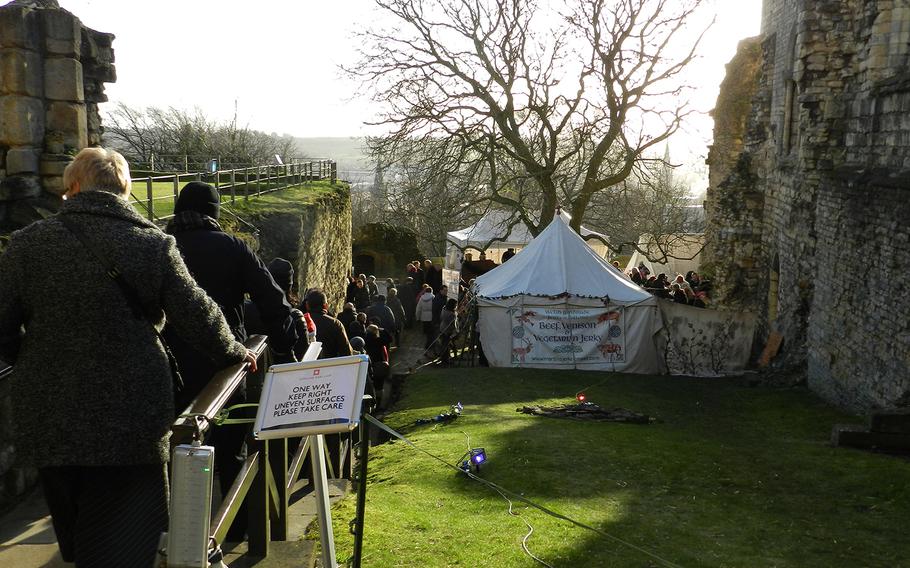 Buy Photo
The medieval market lies amid ruins called Bishop's Palace and is separate from the rest of the market. A one-euro entry fee is charged for this market, which features local artists selling glass decorations and wine, among other items. (Pary Smith/Stars and Stripes) 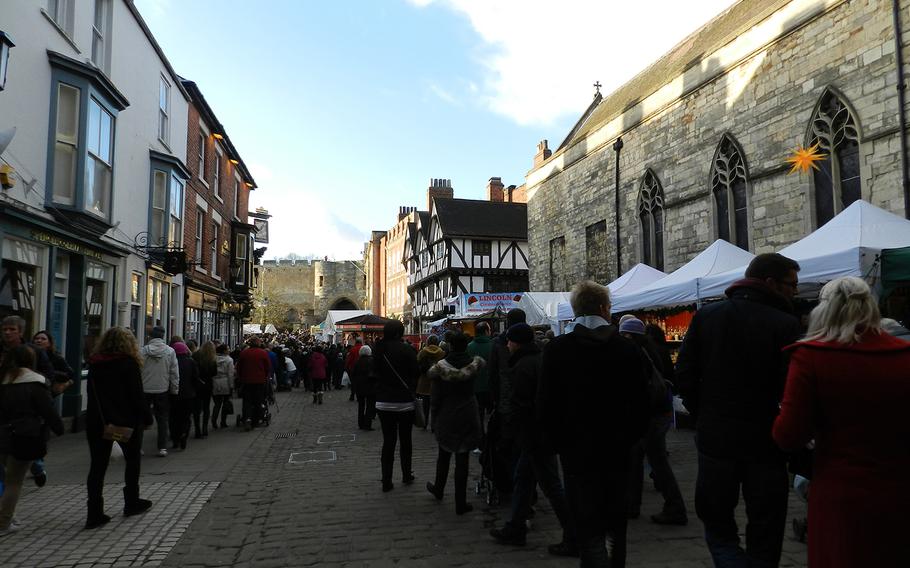 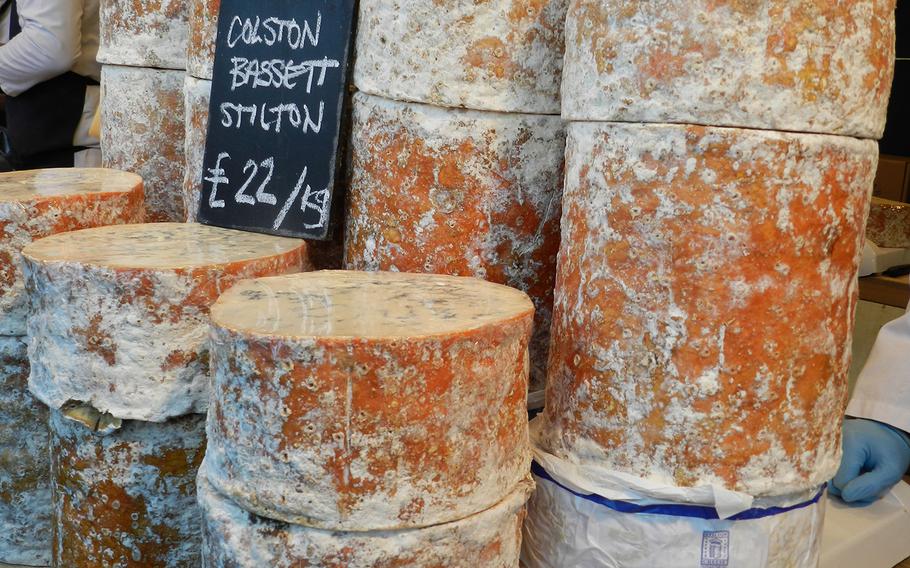 The only thing missing was the snow, but organizers of the Christmas market in Lincoln, England, had that covered.

Lincoln’s sprawling and delightful Christmas market is marking its 30th birthday this year, a mere child in comparison with some of the centuries-old markets held elsewhere in Europe.

But this youngster of a market is every bit as enchanting, magical and merry as the ages-old events. Last year, more than 200 stalls offered woolen hats, socks and mittens; mounds of locally produced cheese, jams and fudge; and other items related and unrelated to the holidays, such as Christmas decorations, didgeridoos and crystal chalices. There was a colorful midway with a beautiful carousel. Dapper vendors in top hats added even more charm to the market.

One of my favorite stalls sold military-themed items, such as clever notepads decorated with bears dressed in uniforms and sporting a bandaged arm or a leg in a cast. Proceeds from this stall were going to the United Kingdom’s Help for Heroes charity, which aids Britain’s wounded warriors.

It was the first market I’ve attended that insisted on an organized route for its thousands of visitors: “One way only, please. Start here and walk in this direction” — true to the English reputation of keeping things civilized, although organizers have dropped the “one-way” plan for this year’s market.

For an entry fee, shoppers could visit a separate, more upscale market in the town’s castle that spotlighted local artists. There, glass items, wine and jewelry were among the items for sale, along with a few food stands serving, for example, hearty corned beef hash with chunks of carrots and potatoes, and mulled wine that was heavy on the cinnamon.

To make the atmosphere even more merry and bright, a snow machine blew fluffy flakes at passers-by as they filed into castle square to shop at more stalls and to hit the midway. To top it off, a jolly man that looked every bit like Santa himself mingled among the crowd, delighting adults and children alike.

There is very limited parking around the market area. I recommend taking a train to Lincoln, then taking a bus to the market. The bus station is conveniently located just a few minutes’ walk from the train station. If you don’t mind a strenuous walk, the market is located at the top of castle hill overlooking the city.

There is a park-and-ride service available for those who want to drive to Lincoln. Buses leave from the Lincolnshire Showground off the A15 motorway north of Lincoln. For GPS, the postcode is LN2 2NA. Park-and-ride tickets are available in advance for 12 British pounds (about $20).

Where to stayLincoln has several hotels and bed-and-breakfast accommodations, but they book up quickly during the market. For suggestions, go to visitlincoln.com/stay.

CostsThe main market is free; entry to the medieval market at the ruins known as Bishop’s Palace costs 1 British pound (about $1.65).

Good to know• The market’s website notes that Santa will make regular appearances and will have a special postbox to collect children’s letters to take back to his workshop. • No dogs except assistance dogs are allowed at the Christmas market.