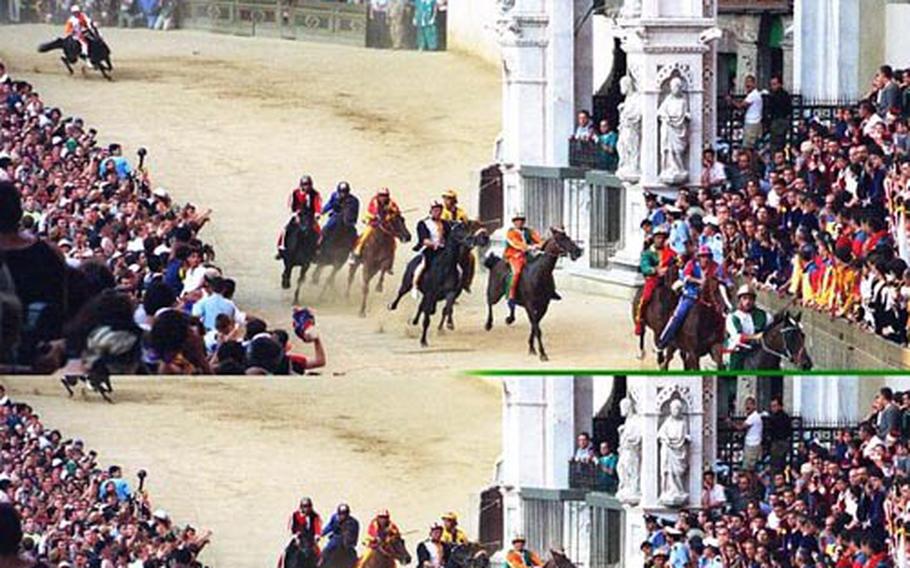 Buy Photo
The Palio di Siena consists of three laps around the Piazza del Campo. The race lasts about 80 seconds, and the winner receives a painted silk banner, the “palio.” (Stars and Stripes)

France: Wednesday at midnight, the 2008 Beaujolais Nouveau wine was officially opened, beginning a celebration by the lovers of the new red wine throughout the world. Through the weekend, the Beaujolais region&#8217;s towns and villages hold a variety of festivities, the most obvious of which is the tasting of the wine in open cellars. In Beaujeu, capital city of the region, the Salon des Sarmentelles, a wine fair, will offer wine tastings through the weekend and crafts markets through Saturday. For details, go to www.beaujolais.net.

Italy: It began in the 17th century as a three-day walk by survivors of the plague in Venice, who were pleading with the Virgin Mary to save their city from the disease. Two decades later, those remaining made good on a promise to build a church, and thus the Basilica di Santa Maria della Salute was begun. To shorten the walk to the church during its opening celebration, a bridge of boats lined up over the water from the center of town to the church. This Friday, members of the public will celebrate this historic event with the annual Festa della Madonna della Salute ("Feast of Good Health"), making their own pilgrimage to the church over temporary pontoons. Find more details at www.turismovenezia.it.

Switzerland: Onion lovers will be crying for joy Monday at Bern&#8217;s traditional Zionion market, whose origins date to 1406. The best theory as to its beginning is that the Seeland farmers were given the privilege of selling their produce at the open-air site to thank them for their help after the city experienced a devastating fire in 1405. Today&#8217;s market with its carnival atmosphere begins at 5 a.m. in the town center&#8217;s streets and squares and ends at 4 p.m. with a huge confetti battle. Bern&#8217;s tourist board Web site is www.berninfo.com.

Held every July 2 and Aug. 16, Siena&#8217;s Palio is the most famous horse race in Italy. Ten horses and riders representing 10 of the 17 contrade (city districts) compete on a track in the town&#8217;s Piazza del Campo, with the winner awarded the palio, or painted silk banner.

The race is preceded by the Corteo Storico, an exuberant medieval pageant including a legion of mounted carabinieri officers, flag wavers, drummers and decorated carts and floats. While the race is the highlight of the festival, the days leading up to the event and the night after have a festive atmosphere.

Palio Tours is offering three- or four-day packages that include hotel, bed-and-breakfast, villa or apartment; Siena contrada museum tour; contrada dinner (invitation-only dinners with members of one of the districts); the historical parade; Palio tickets and optional activities.

Prices depend on the hotel category and location in the Palio audience stands (balcony standing, balcony seated, grandstand or starting line). For example, three nights in a three-star hotel, double occupancy, balcony standing, runs from 685 euros (about $858) to 810 euros per person (with grandstand tickets, 745 to 870 euros). A B&B, double occupancy, runs 675 to 705 euros per person. Apartment and villa rentals are for the week.

The Austrian Alps are already getting great snow, so this might be the winter to take advantage of the new Kitzb&#252;heler Alpen AllStarCard, valid on 357 cable cars and lifts accessing more than 670 miles of groomed pistes and some 50 miles of marked trails.

The pass costs 43 euros for one day, 82.50 euros for two days, 225 euros for a week on up to 353 euros for two weeks. Youth ages 16-18 pay about three-quarters of the adult price, and children one-half. Season tickets are also available.

Scotland is paying homage to its history and culture next year with its first Homecoming Scotland.

The country has organized a series of events that celebrate all things Scottish. The events are organized under the categories of Robert Burns (the country&#8217;s national poet whose 250th birthday is in 2009), golfing, whisky, great minds and innovations, and ancestry and culture.

The largest clan gathering ever will be held at the Highland Games July 25-26 in Holyrood Park, Edinburgh, with games, parades and cultural events (www.clangathering.org). If you think your photos of Scotland are exceptionally good, enter one in the special competition under the theme "My Special Place."

For details, go to the Web sitewww.homecomingscotland2009.com.