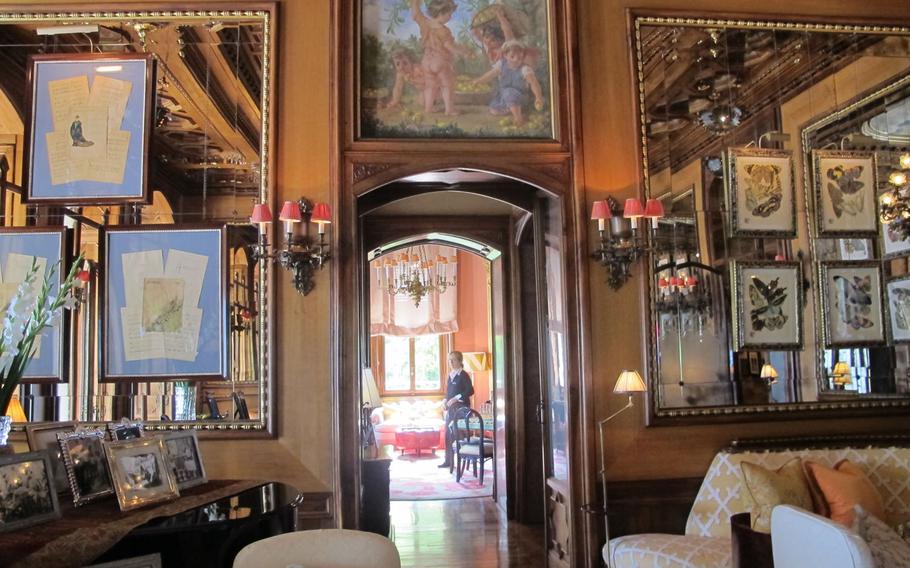 The hotel's salon is beyond beautiful, with its set of rare 1920s butterfly prints. (Nancy Montgomery/Stars and Stripes) 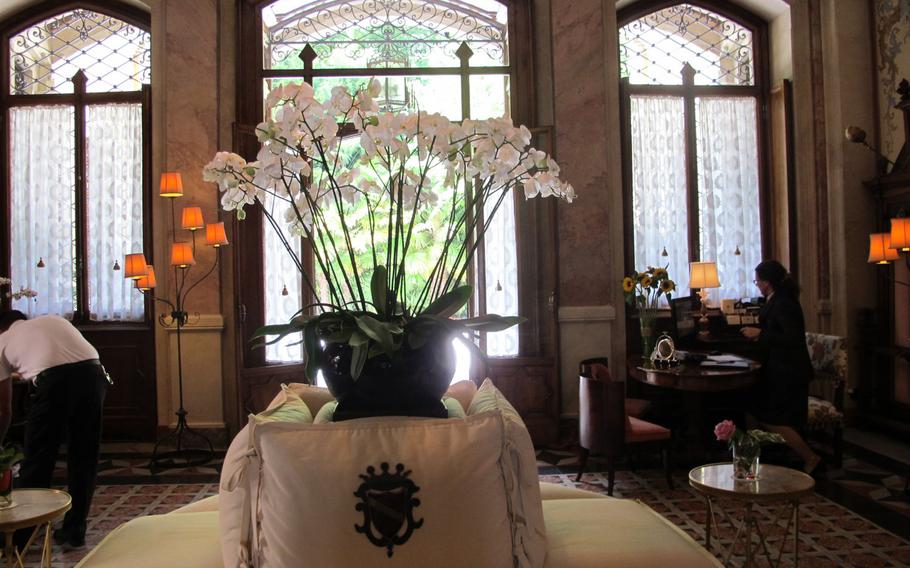 The entryway at the hotel is classy and welcoming. The hotel, opened in 2001 by famous luxury hotelier Bob Burns, is considered by some to be the best hotel in the world. (Nancy Montgomery/Stars and Stripes) A lovely marble, stained-glass-lit stairway to the guest rooms, which were off-limits to a photographer who had, in retrospect, boorishly shown up without notice. (Nancy Montgomery/Stars and Stripes) 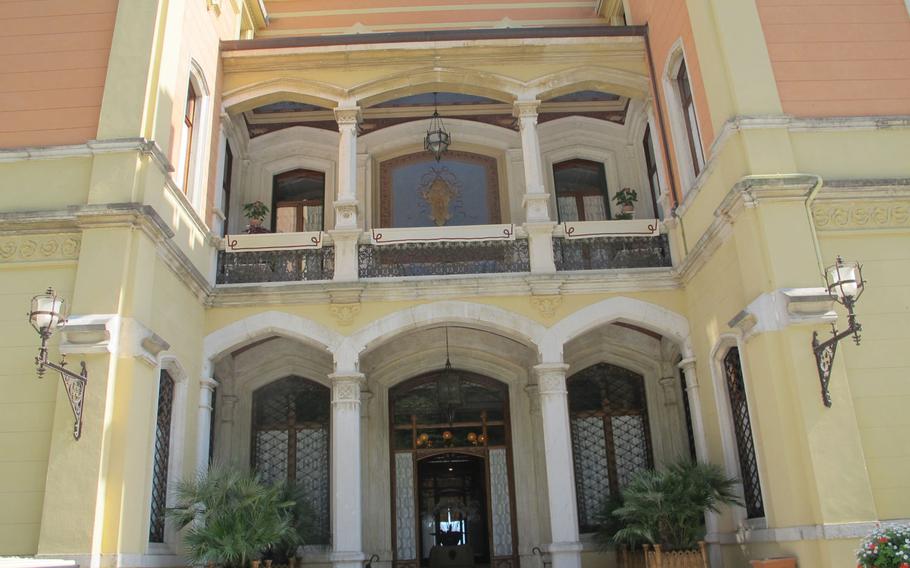 Guests driving to the Grand Hotel a Villa Feltrinelli in Gargnano, Italy, arrive at what's actually the back of the lakeside villa. (Nancy Montgomery/Stars and Stripes) Another public room in The Grand Hotel a Villa Feltrinelli in Gargnano, Italy, where guests are intended to be made to feel they're staying at a home, not a hotel. (Nancy Montgomery/Stars and Stripes) A gravel path leads down to Lake Garda from The Grand Hotel a Villa Feltrinelli in Gargnano, Italy. The hotel also has a pool. Photographing it was forbidden because guests of the hotel pay, in part, for privacy. (Nancy Montgomery/Stars and Stripes) 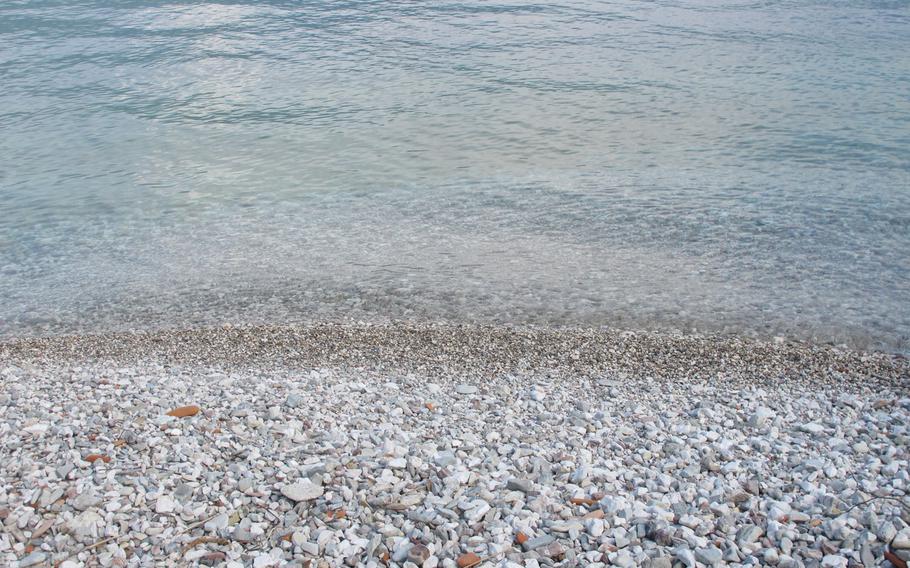 No details are overlooked at the Grand Hotel a Villa Feltrinelli, but staffers are not responsible for the clean pebbles. Lake Garda is unusually pristine. (Nancy Montgomery/Stars and Stripes) Italian fascist dictator Benito Mussolini lived in the Villa Feltrinelli from 1943 to 1945, guarded by German officers and feeling humiliated, according to historical accounts. But he was still able to meet his young mistress for trysts in this tower a few miles away, according to a historical plaque. The mistress was shot and hung from a meat hook alongside Mussolini in Milan in April, 1945, just days before World War II in Europe ended. (Nancy Montgomery/Stars and Stripes) 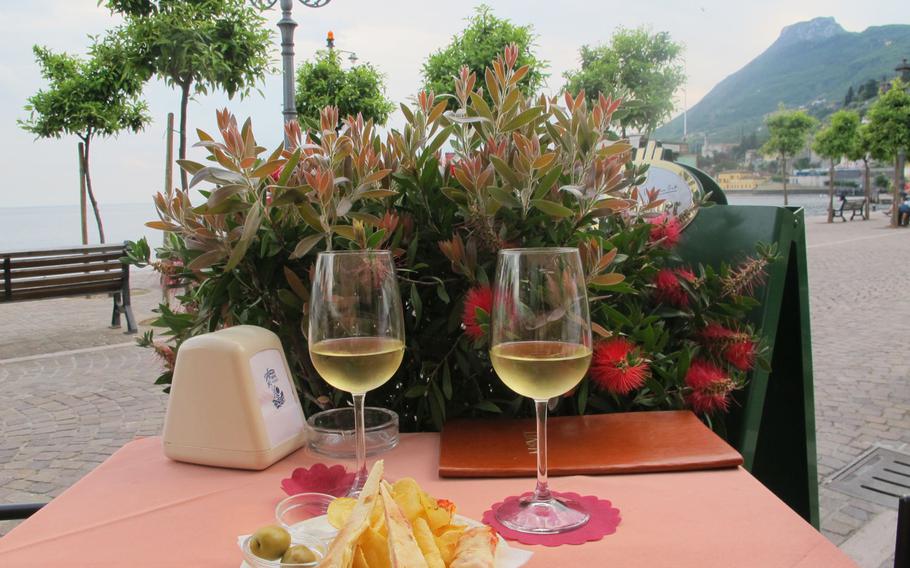 The Grand Hotel a Villa Feltrinelli is in Gargnano, which, like other towns that dot Lake Garda, Italy, offers access to beautiful vistas and good wine and food at affordable prices. The wine: 3 euros. The chips and olives: free. The view of the lake: priceless. (Nancy Montgomery/Stars and Stripes) The fascist dictator also dined, dallied and did the bidding of his Nazi protectors here in Gargnano, Italy, near the end of World War II in a neo-Gothic villa on the shore of Lake Garda owned by the Feltrinellis, one of Italy’s richest families.

Mussolini’s end was gruesome: After he was captured by partisans near Lake Como and executed, his body was stoned and spat upon, then hung upside down on a meat hook, alongside that of his much-younger mistress, from the roof of an Esso gas station in Milan.

Only last week, a wardrobe that for years held the remains of the totalitarian leader who sought to make Italy a nationalistic, militaristic, anti-egalitarian state, was put up for sale on eBay, starting at $7,000.

The villa, on the other hand, lives on.

After the war, the house was reclaimed by the Feltrinelli family. Among them was Giangiacomo Feltrinelli, a publisher who rebelled against his upbringing and founded a group that advocated guerrilla activity on behalf of Italy’s working class.

He hid out at the villa in 1970, when, according to villa history, he was an international fugitive. His death near Milan two years later was attributed to his accidentally triggering his own explosives during a mission to blow up power lines.

Now, the villa is a grand hotel — for the one percent and those who wish to live like them, if only briefly.

The hotel, painted terra cotta and gold, and its surrounding acres of perfectly manicured grounds and gardens, sit enclosed behind a gate and down a lushly forested drive. All towers, frescoes, marble, antiques, Michelin-starred cuisine, lake views, croquet, lemon trees, flowers and butterflies, it is inaccessible to anyone other than paying guests and the workers who outnumber them three to one.

Few guests are aware of the villa’s interesting past, said staffer Alessia Micheletti, who graciously gave me a tour when I arrived unexpectedly on a sunny May afternoon, following a guest driving a Lamborghini.

Opened in 2001 by famous hotelier Bob Burns, who served four years in the U.S. Army, the hotel does, however, provide a two-page villa history. There are two paragraphs about Mussolini’s time there. “This was probably the unhappiest time in Mussolini’s life as a political leader,” according to the history. “He was, in spite of the appearance, a prisoner. … He was guarded by German officers and forced into a humiliating isolation.”

Mussolini’s stay began in October 1943, after he was deposed and arrested in Rome by Italian authorities, then freed by Nazi commandos, who spirited him north to front a shadow government in Salò.

By April 1945, Mussolini, who frequently posed shirtless for photographs and boasted of his unflagging libido, and whose 21-year rule of Italy brought it to the edge of ruin, was again on the run. He was shot to death on April 28, two days before Adolf Hitler killed himself and 10 days before the official end of World War II in Europe.

More than a hundred guests have written reviews of the hotel on the Trip Advisor website and without fail describe it as perfect, pure bliss and the best hotel in the world.

One reviewer said she’d wondered if any hotel could be worth so much money, and found that it could. She reported a “first-hand experience of the lost, gilded world” where she enjoyed “spine-tingling daydreams of Daniel Craig climbing out of the lake in a frogman suit” and impeccable, friendly service.

“I could vacation in the bathroom alone!” she wrote.

Still, she had a few suggestions. “The rose petals in the toilet are too much,” she wrote. “I am sure Benito Mussolini liked them in his toilet bowl, but they are in bad taste.”

The Grand Hotel a Villa FeltrinelliLOCATION