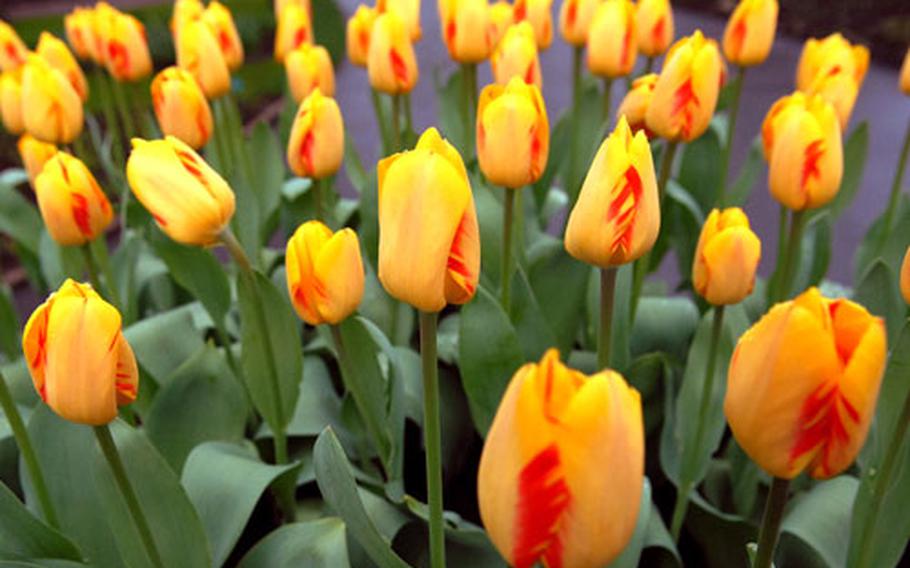 A bed of tulips at Keukenhof, the spring garden on the outskirts of Lisse, Netherlands, known for its blooming spring flowers. (Michael Abrams / S&S)

In Holland, there is no better way to celebrate the season than with the opening of Keukenhof, the world-famous flower garden on the outskirts of Lisse.

The flower display started in 1949 when 40 bulb growers from the area got together to create an open-air flower exhibit at a former 15th-century hunting estate with a herb and vegetable garden. The site got its name from Keuken, Dutch for kitchen, and hof meaning garden. In the mid-1800s, a landscaper designed a park there that is still the basis for the current gardens.

Today, more than 90 growers plant about 7 million bulbs at Keukenhof &mdash; about 4.5 million of them tulips &mdash; and about 800,000 visitors come annually to see the flowering spectacle.

Once upon a time, tulips were a treasure. Introduced to Europe from Turkey, the tulip first appeared in the Netherlands in 1593. By the 1630s, &ldquo;tulip mania&rdquo; had gripped wealthy Dutch. An Amsterdam canal house &mdash; worth the equivalent of $500,000 today &mdash; was said to have been traded for a single bulb.

The tulip bubble burst in 1637, costing many a fortune. With the exception of World War II, when eating them saved many of the Dutch from starvation, the tulip went back to being a regular old bulb.

Well, not quite. The Netherlands is the world&rsquo;s largest producer of tulips and other bulb flowers, such as narcissus, hyacinths and gladiolas. A multimillion dollar business, the country&rsquo;s exports exceed 2 billion bulbs each year, with most of them going to the United States, followed by Japan and Germany.

Visitors to Keukenhof can spend hours walking paths that crisscross the 80 acres of gardens, past flower beds, fountains and around a lake.

Sculptures by various artists dot the grounds, making Keukenhof not only a flower exhibit, but also the largest sculpture park in the Netherlands.

A climb up the 19th- century windmill offers a different perspective of the gardens, and later in the season, an outstanding view of the blooming tulip fields on the outside.

There are four indoor pavilions, one of which, the Beatrix Pavilion, has a wonderful orchid exhibit. The Willem Alexander Pavilion has changing exhibits during the season, including what Keukenhof officials say is the largest lily show in the world. starting May 8.

Gardeners inspired by the visit can order bulbs so that next spring their own garden can bear a resemblance to Keukenhof.

Although on opening day &mdash; the first day of spring &mdash; the weather was cold and the color green dominated, Keukenhof should be in full Technicolor bloom by the time you read this.

By train, travel to Leiden and take bus line 54 to Keukenhof. Line 58 connects Shiphol Airport with Keukenhof, and Bus 89 runs from The Hague&rsquo;s central station to Keukenhof Monday through Friday.

&bull; For information and online tickets: Go to the park&rsquo;s Web site at www.keukenhof.nl.