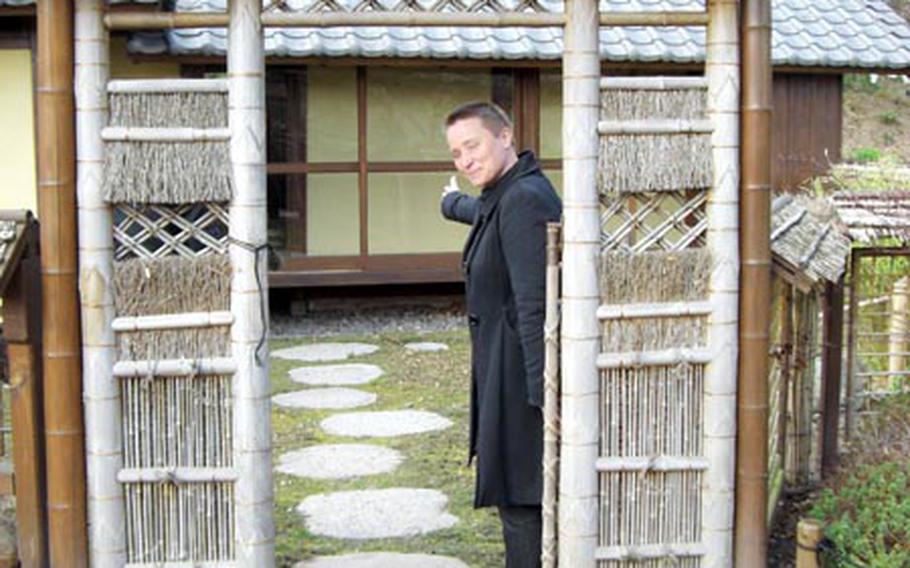 Sabine Hedeler, manager of the Japanese Garden in Kaiserslautern, extends a welcome at the gate of the garden’s tea and guest house. The 100-year-old house once stood in a park in Tokyo. (Marcus Klöckner / S&S)

Sabine Hedeler, manager of the Japanese Garden in Kaiserslautern, extends a welcome at the gate of the garden’s tea and guest house. The 100-year-old house once stood in a park in Tokyo. (Marcus Klöckner / S&S) 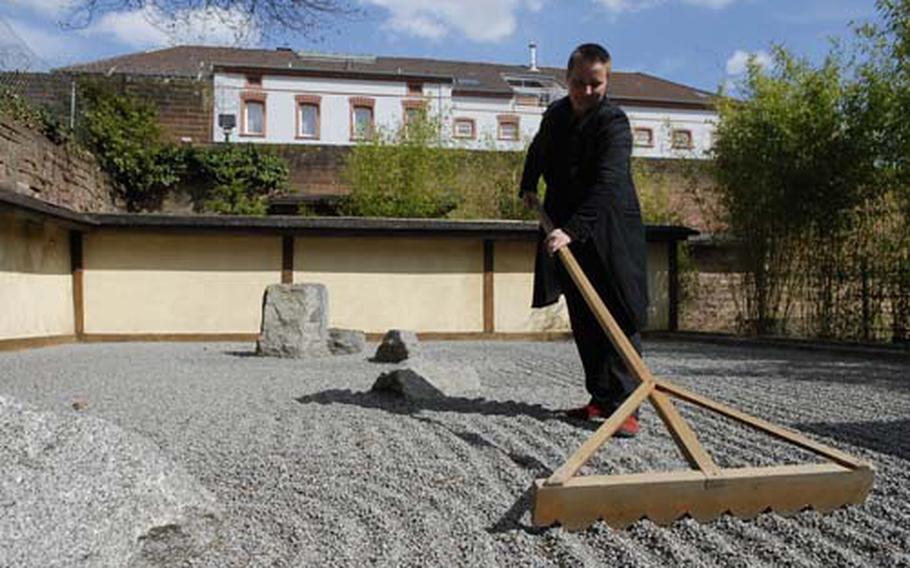 Hedeler rakes the stone garden. The lines left by the rake are symbolic of ocean waves moving around rocks or the islands of Japan. (Jennifer H. Svan / S&S) 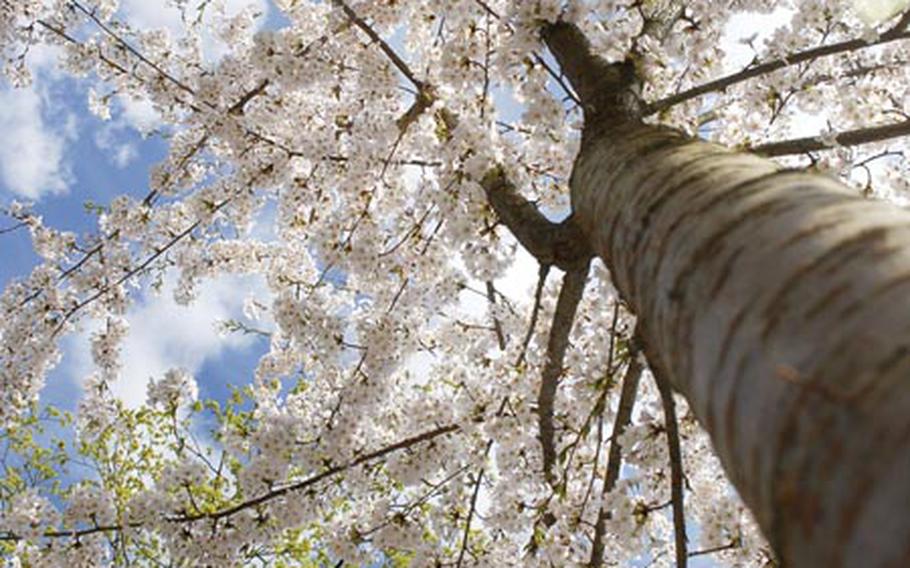 A cherry tree shows off its fleeting spring beauty at the garden. It flowers for only 10 to 14 days. (Jennifer H. Svan / S&S)

With great admiration, the gray-haired woman stared at the beautiful cherry blossoms blowing in the wind. As she stood surrounded by the blooming white flowers, she helped portray the blending of age and youth, one of the themes behind the Japanese Garden in downtown Kaiserslautern, Germany.

The themes come to life throughout the 3&frac12;-acre garden. They are revealed through a symbolic language that uses plants, stones, sand and water to create a peaceful setting and deliver a message. The staff urges visitors to come to the garden for a break from the stress of daily life, and see what is all around you.

"The Japanese Garden is like a reflection of life," says Sabine Hedeler, manager of the garden. Man is a part of nature and nature is a part of man, according to the garden&rsquo;s Web site, referring to a Buddhist point of view. Thus, nature in the garden is arranged in a way that illuminates the image of life.

As Hedeler says, "Look at this stone and the moss growing on it. Is this not fascinating? Can you imagine how hard it must be for life to grow on a stone? The closer you get, the better you see how much life can be found on this barren soil. It is not just the moss, but also these insects. Is this not an interesting reflection of life? Does life of man sometimes not demand to live and grow on hard soil, too?"

Thoughts like these can guide visitors through the little city oasis, which opened in April 2000. The gardens are well-maintained, and through a careful observation of the scenery and its layout, visitors can absorb the ideas behind the garden.

But that does not always seem to be the case. Sometimes visitors expect to see big attractions. But Kaiserslautern&rsquo;s Japanese Garden is not Disneyland: there are no carousels, no entertainers. Yet, there is enough to see, such as different ponds with koi (Japanese carp), a 33-foot waterfall and an original Japanese tea and guest house.

Unfortunately, Hedeler says the 100-year-old house "is only open for special tours since there is always the danger of vandalism." Nevertheless, it is always possible to see the house&rsquo;s architecture and how it fits in with the scenery.

The garden is in keeping with similar ones in Japan, and truly brings a part of Japan to Kaiserslautern. At least that is the belief of Air Force Capt. Robert Koo, 29, who is based at Ramstein Air Base.

"I think the garden is beautiful. It brings a sense of Asian culture to Western society," he said recently, while sitting in the garden with his family, who was visiting from Hong Kong.

Added his father, Frank: "It is small, but exciting."

While it might be small by Japanese standards, it is the largest garden of its kind in Germany. Still, it is not what one usually would consider big &mdash; you can quickly circle the garden. But if you did, you would be missing its whole point.

A visit to the Japanese garden is more for resting the mind than stretching the legs. Take your time and appreciate its subtle characteristics. You&rsquo;ll be glad you did when you return to the "real" world.

On the QTDirectionsExit Autobahn 6 at Kaiserslautern-Centrum and follow Route L395 through the city (it changes names from Mainzerstrasse, to Ludwigstrasse and then Lauterstrasse) to the garden entrance at Lauterstrasse 18. It is near Kammgarn cultural center. A city parking lot is nearby on the other side of the street.

Food The garden has a snack bar located near the tea and guest house.