Everyone on the Glacier Express train, including a Japanese couple on their honeymoon, wanted to capture the spectacular scenery of the Swiss countryside on camera. The Glacier Express ranked No. 1 this year in The International Railway Traveler’s readership poll for the World’s Top Rail Experiences. (Leah Larkin / Special to S&S)

Everyone on the Glacier Express train, including a Japanese couple on their honeymoon, wanted to capture the spectacular scenery of the Swiss countryside on camera. The Glacier Express ranked No. 1 this year in The International Railway Traveler’s readership poll for the World’s Top Rail Experiences. (Leah Larkin / Special to S&S) 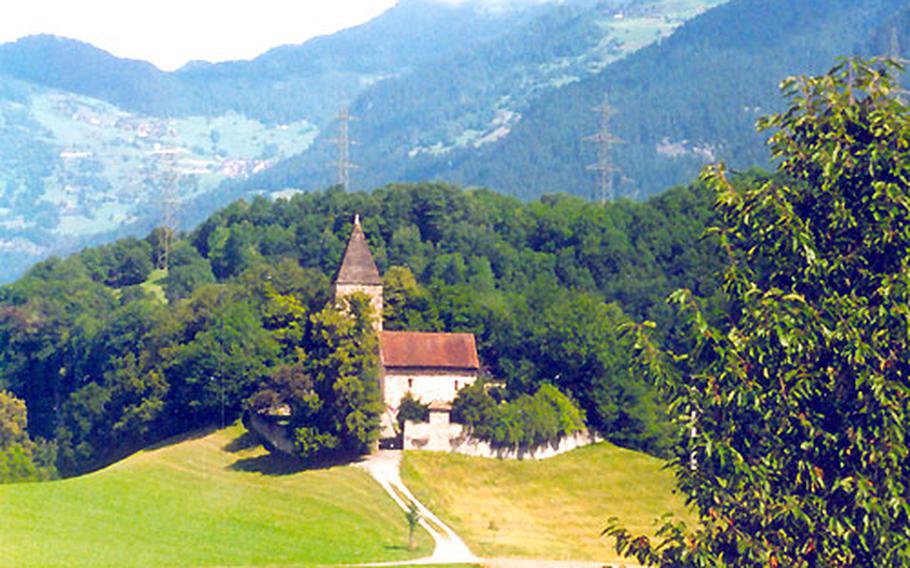 The scenery out the window of Switzerland’s Glacier Express begged to be photographed. (Leah Larkin / Special to S&S) 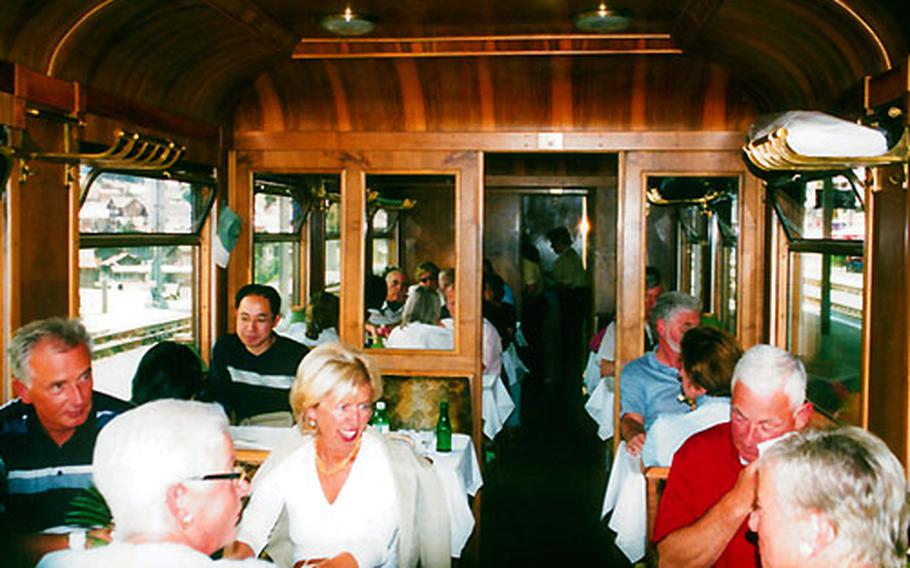 Dining in the Belle Époque dining car on the Glacier Express is an experience in old-world elegance. (Leah Larkin / Special to S&S)

A retired couple from Russia sat across from me for the 7&#189; hour journey on the Glacier Express train through the best of Switzerland. They chatted, laughed, pointed and took both video and still photos.

Across the aisle was an Italian couple. Before the train pulled out, she was on her cell phone telling friends of the journey about to begin. Groups of young Japanese &#8212; schoolteachers and a couple on their honeymoon &#8212; as well as British, Americans and Germans, joined the group in car No. 12.

Called &#8220;the world&#8217;s slowest express train,&#8221; the Glacier Express is a popular tourist experience in the land of legendary mountain peaks. The bright red sightseeing train travels year-round between the glitzy resort of St. Moritz and Zermatt, the home of the Matterhorn. The leisurely ride is one of loops and coils, steep climbs and descents, and endless tunnels.

The scenery, which is what the trip is all about, is superb. Deep gorges, glorious mountains, lush green pastures dotted with brown cows, villages of weathered chalets clustered around a church steeple, waterfalls, raging rivers and streams, canyons and crevasses. This is Switzerland. And, what a way to see it!

Announcements in three languages (French, English and German) give statistics and explain the sights as you roll by. The comfortable seats face one another with a table in the middle.

Huge windows, which run almost the full height of each car, provide excellent picture-taking opportunities. A refreshment wagon passes by. (The Russian woman ordered a beer and peanuts at 10 a.m.) There&#8217;s also a souvenir cart for those who must purchase a pricey reminder of the trip. And, there&#8217;s an elegant dining car.

Lunch (reservations in the dining car are a must) is a delight. The Belle &#201;poque dining car is decorated with highly polished oak panels and gleaming brass fixtures. Upholstered chairs and crisp white table linens complete the scene. It&#8217;s what I imagine dining cars in the old days of elegant train travel must have been like.

I ordered the set menu of the day: salad, beef Stroganoff with rice and carrots, and orange cake, for 36 Swiss francs (about $26). A glass of Swiss red wine was 7.80 Swiss francs. It was almost surreal to sit in this splendid ambience, savor Stroganoff and watch a continual slide show of magnificent mountain scenery.

The friendly, enthusiastic waitress was able to address most of the patrons in their own language, including the Japanese couple who sat next to me in the dining car. She said the train ride is especially popular with the Japanese.

If the scenery out the train windows doesn&#8217;t boggle your mind, consider these train statistics:

&#182; To conquer steep gradients, such as 110 percent over the Oberalp pass and as much as 179 percent between Andermatt and G&#246;schenen, rack-rail systems are used. The locomotives have a double cogwheel that locks into a toothed rack mounted between the rails. This system is also important for steep descents, assuring safe breaking.

&#182; For winter rides, when deep snow often covers the tracks, large snowplows are ready for action. One can clear as much as 19 tons of snow per minute.

&#182; Some 230,000 passengers ride the Glacier Express every year. The train covers a distance of 260,400 miles a year which corresponds to 10 times the circumference of the earth.

The Glacier Express has passed through the Furka area, in the heart of the Alps in south central Switzerland, since 1928. Back then severe blizzard conditions meant that many of the railroad bridges were removed in October then reinstalled in May. To get from St. Moritz to Zermatt, skiers and tourists had to detour to Zurich, a time-consuming journey. The Furka Tunnel opened in 1982, and since then the Glacier Express has run on a daily basis.

Three private companies operate the popular red train: the Brig-Visp-Zermatt Railway, the FO (Furka-Oberalp Railway) and the Rhaetic Railway. Together they form a continuous network of 1-meter gauge mountain railways. Each is responsible for a different section of the track. The train stops frequently, and the stops are longer when the locomotives are switched &#8212; each company provides its own. Each company also provides its own personnel, such as the conductors, which means you must show your ticket every time a new crew comes on board. On the special first-class panorama train, which I rode, passengers stayed on for the entire journey.

As the train continues its journey, you learn that you have just reached the highest point of the trip (the source of the Rhine), that you are passing by a slope of the highest vineyards in Europe, that the village of Kalpetran is the steepest village in the canton of Valais, that the 213-foot-high, 430-foot-long viaduct, the Landwasserviaduckt, is an amazing feat of railway engineering, etc.

It is indeed a trip of superlatives. It&#8217;s so impressive that some want to take the ride again, perhaps in a different season. I asked the Russian couple how they liked the adventure. The man, who spoke some English, answered.

A ticket on the first-class Glacier Express Panorama train from St. Moritz to Zermatt is 230 Swiss francs (about $166.75). A second-class ticket on a regular train, which follows the same route, is 143 Swiss francs.

More information on the train is available at www.glacierexpress.ch.

The Swiss Pass or Swiss Flexi Pass, which are passes for unlimited train travel in Switzerland for a set number of days, can be used on the Glacier Express. More information on these and other train offers in Switzerland is available at www.sbb.ch.