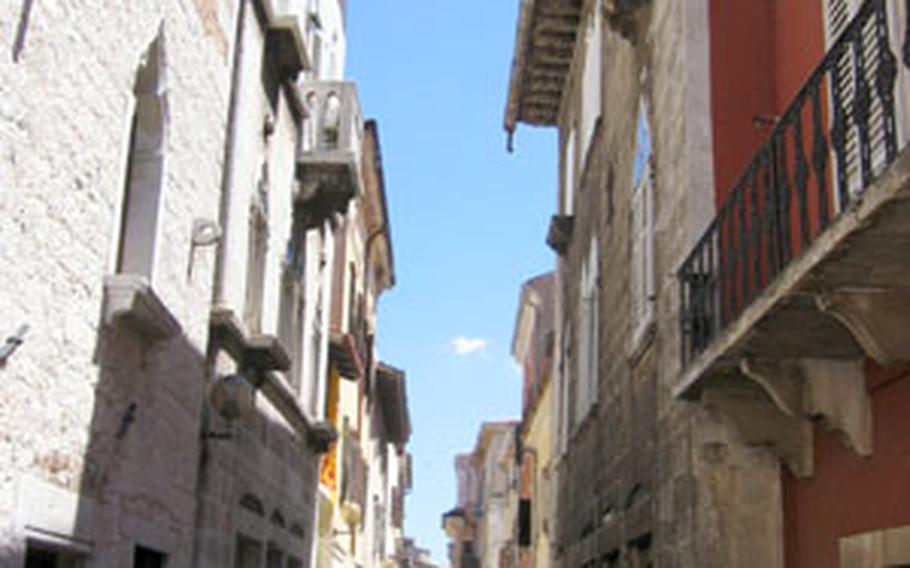 The picturesque seaside town of Rovinj has tight streets crowded with shops, restaurants and bars. (Jim Sajo / Special to Stars and Stripes)

The picturesque seaside town of Rovinj has tight streets crowded with shops, restaurants and bars. (Jim Sajo / Special to Stars and Stripes) 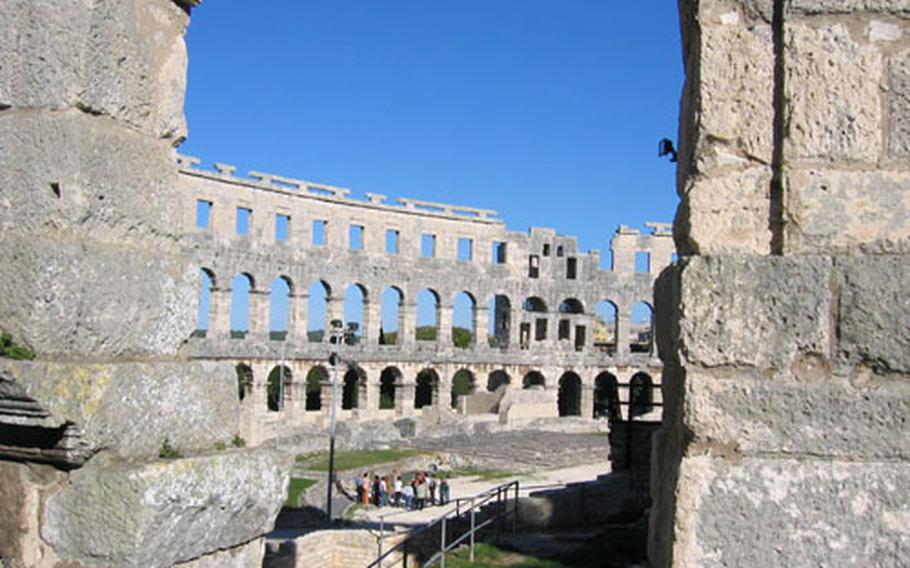 The coliseum in Pula is almost completely intact and is one of the largest remaining Roman arenas in the world. (Jim Sajo / Special to Stars and Stripes) 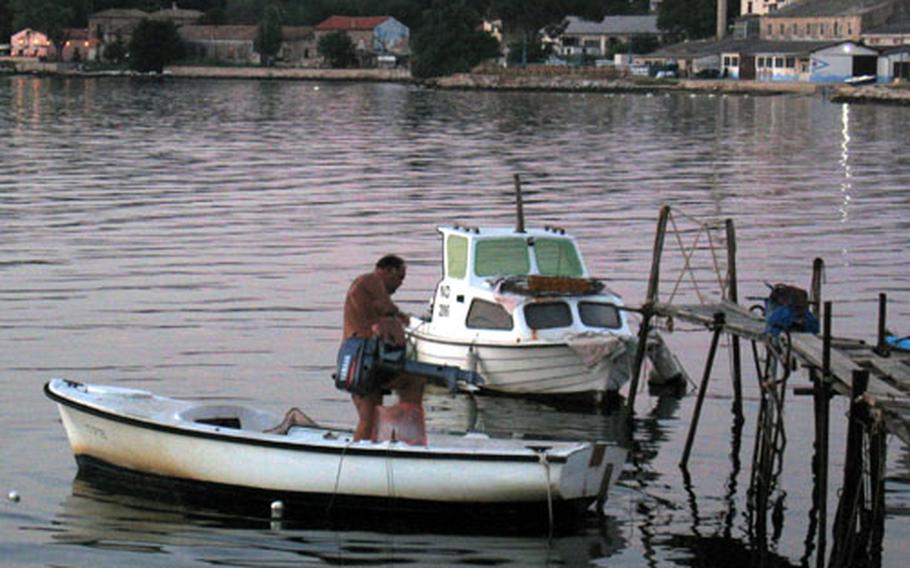 Early every morning, local fishermen set out from the harbor in Rovinj to find the catch of the day. (Jim Sajo / Special to Stars and Stripes) 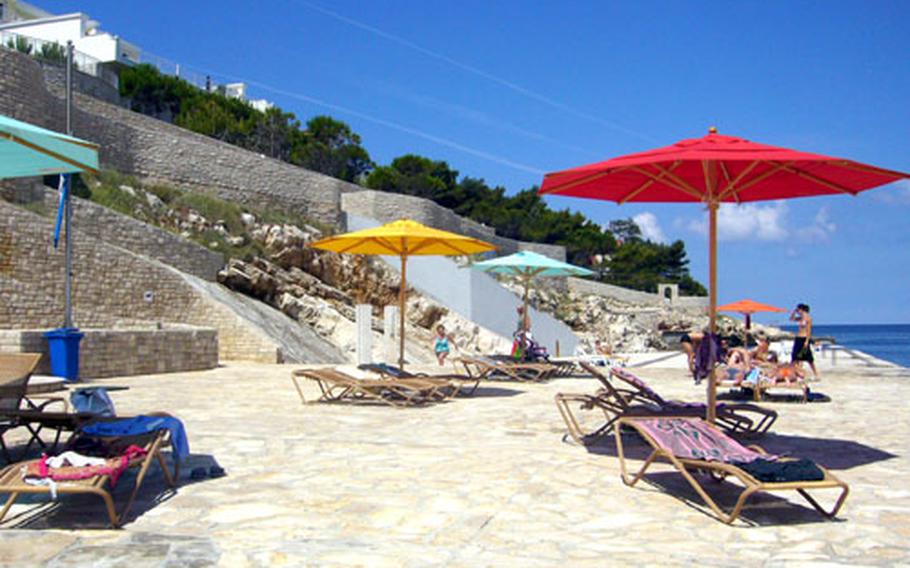 The beaches of Istria are famous for the striking blue water and shallow entry. (Jim Sajo / Special to Stars and Stripes) 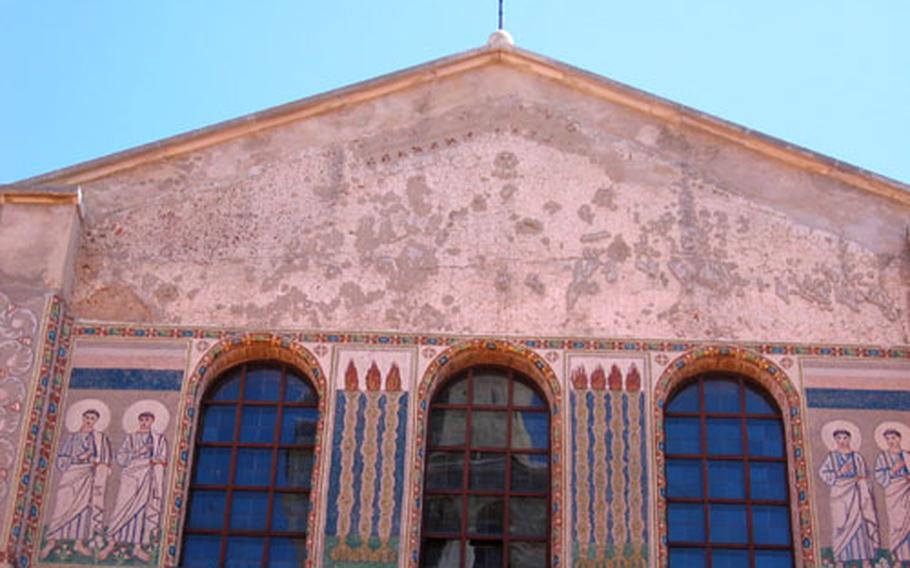 Istria’s Byzantine history can be traced throughout the peninsula. One example is this chapel in Rovinj, designated a World Heritage Site by UNESCO. (Jim Sajo / Special to Stars and Stripes)

As I reached for the passports, the border agent looked warily into the backseat.

&ldquo;Vot is dis?&rdquo; he asked, pointing nervously at two coolers stacked there.

&ldquo;It&rsquo;s food,&rdquo; I told him.

With a perplexed look, he replied: &ldquo;But we are already havink the good food in Istria!&rdquo;

He was right, and that is not all they have. Well-known, and well-visited for its pristine beaches, the wedge-shaped peninsula at the north end of the Adriatic Sea also offers an inviting mix of Roman ruins, tantalizing tastes, and historic hill towns that make it more than a beach desitination. Here are some of the highlights.

Pretty cities&bull; The most picturesque city on the peninsula, rising dramatically on the Adriatic coast, is Rovinj (roh VEEN). Narrow, twisting walkways snake past dignified yet crumbling buildings with their characteristic pointed windows. Local fishermen bring their catch into the tranquil harbor each morning. Its architecture gives Rovinj the feel of Venice, without the crowds or costs.

&bull; A bit farther south along the western coast, Pula is Istria&rsquo;s largest city. An industrial port with smog, traffic and sprawl, Pula boasts the finest Roman ruins on the peninsula. The most famous is the fully intact amphitheater, but don&rsquo;t hesitate to walk into the old town labyrinth, where you&rsquo;ll find magnificent arches, ancient temples and stately columns.

&bull; Pretty much abandoned as recently as 30 years ago, today the village of Groznjan (grohz-NYAHN) bustles with creative energy and bohemian funkiness. More than 20 art galleries, along with the Croatian Youth Music Center and a new international summer film school, have drawn a population of young artists who make this a fascinating and fun place to visit.

&bull; More picturesque is Motovun, sitting high on a bluff, encircled by medieval walls and offering commanding views in every direction. This ancient fortress has a recorded history of nearly 1,000 years. Each August, it gets very young as the host to a cutting-edge film festival. A terrific place to stay (and eat) is Hotel Kastel (www.hotel-kastel-motovun.hr). You can climb to the top of the village on a narrow traffic-free cobblestone path way not much wider than your typical American sidewalk.

Eating & drinkingWhen it&rsquo;s time to eat, consider Istria&rsquo;s most famous gastronomic celebrity, the truffle. This fungus grows just below ground among the roots of hardwood trees and proffers a distinct flavor that stands up to pasta, risotto or any cut of meat.

Truffle collecting is shrouded in stealth and mystery. Specially bred dogs sniff out the treasure for their masters. Once removed from the ground and wrapped carefully in delicate linen handkerchiefs, the prize is carried to local markets. They are sold in quiet stalls away from the din and roar of merchants selling more common goods. While still expensive, prices here are a fraction of those found elsewhere in Europe.

The largest truffle ever found (according to Guinness Records) was discovered in Istria in 1999. Giancarlo Zigante and his dog, Diana, unearthed the 2.8-pound monster near the village of Livade.

Thanks to the marvelous Mediterranean climate, olives and grapes also grow here in great abundance. Two types of the latter, Malvazija and Terran, produce Istria&rsquo;s most important white and red wines, respectively. These wines, ignored until recently, are gaining note in the international wine trade, due to their unusual flavors and relatively low prices.

Malvazija is a straw yellow, dry white wine with moderate structure. It has a slightly almondy taste that makes it the perfect complement to the marvelous seafood those fishermen in Rovinj offer. Terran is a dark, ruby-colored red that surprises with its light aroma and taste. It is a great match for any dish with truffles.

Other delightsIstria&rsquo;s reputation for great beaches and lively beach towns is well-deserved. Crystal blue water, shallow, rock-free entry and modern amenities on shore make a trip to an Istrian beach worth the drive.

Stay away in late August, though; that is when prices and crowds go way up. Accommodations along the coast range from campgrounds to 5-star hotels (a 6-star is scheduled to open next year).

Often compared favorably to Tuscany and Provence, Istria provides the charm of each with the cost of neither. In fact, the triangular &ldquo;continent within a country&rdquo; just might be Europe&rsquo;s last great deal.

And while you are driving home after your visit, be sure to stop and tell the border agent he was right.

Know and go ...Options for where to stay in Istria range from simple campgrounds to top-end luxury hotels. An intriguing alternative is called agriturizm, or farm holidays.

You&rsquo;ll rent a room on a working farm away from the noise and bustle of towns and beaches. Accommodations are usually simple but surprisingly clean, and almost always cheaper than hotels. You are likely to share the front yard with cows or goats, too.

For more details, see www. istra-zivot.com, or www.istra.hr. The latter is the tourism office for Istria, but has links to hotels, pensions, and agriturism farms.

An unusual attraction on Istria is its large number of nudist camps. The Croatian Adriatic coast is among the friendliest naturalist destinations in the world &mdash; there are more than 30 official resorts and beaches and numerous unofficial naturalist or clothing-optional beaches or coves.

The first naturalist camp was opened on Paradise Beach in 1934. For more information, go to www.cronatur.com.