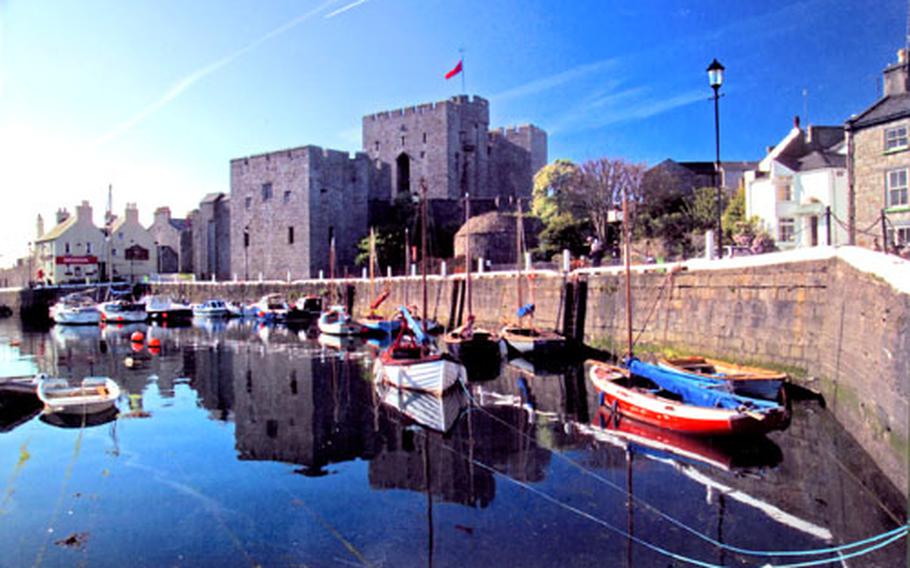 Folks in Castletown believe its 13th-century Castle Rushen is the most complete medieval fortress in the United Kingdom. The keep is encased by a 14th-century curtain wall with square flanking towers. (Dennis Cavagnaro / Special to S&S)

Folks in Castletown believe its 13th-century Castle Rushen is the most complete medieval fortress in the United Kingdom. The keep is encased by a 14th-century curtain wall with square flanking towers. (Dennis Cavagnaro / Special to S&S) 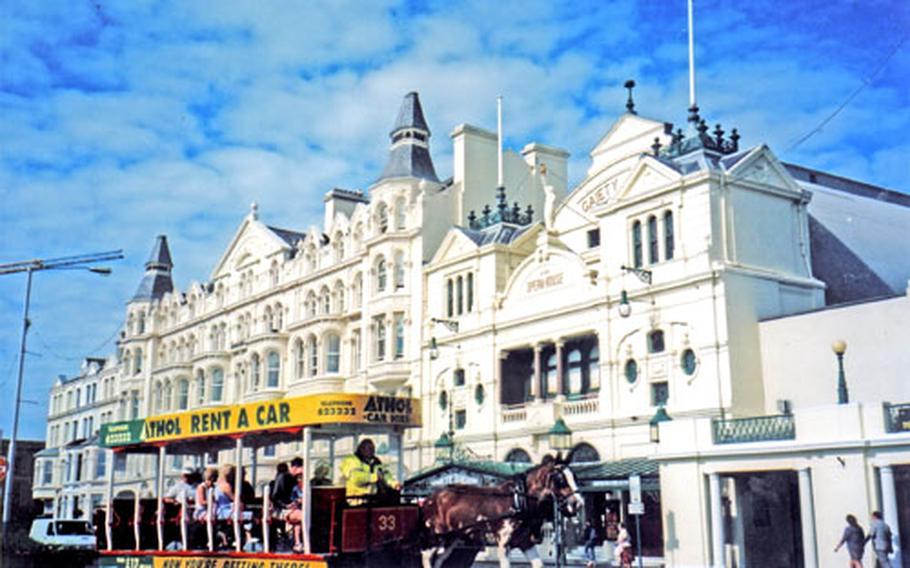 A horse pulling a tourist tram clomps by the Victorian Gaiety Theatre in Douglas on the Isle of Man. The horse trams are a unique statement attesting to Man’s relaxed, unhurried pace. (Dennis Cavagnaro / Special to S&S) 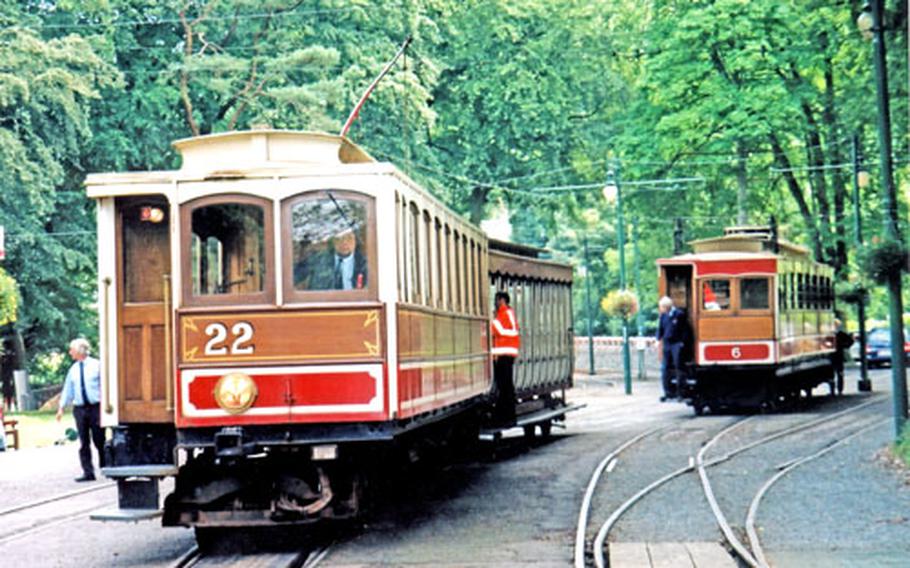 The Manx Electric Railway runs on a double track at Laxey. (Dennis Cavagnaro / Special to S&S) 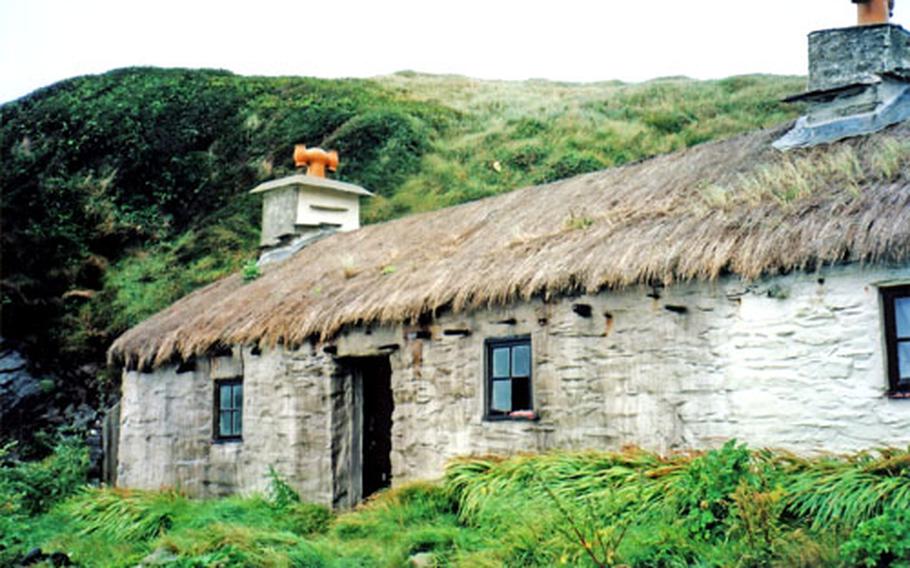 Ned&#39;s rustic seaside cottage is a photographer&#39;s delight on the Isle of Man. (Dennis Cavagnaro / Special to S&S) 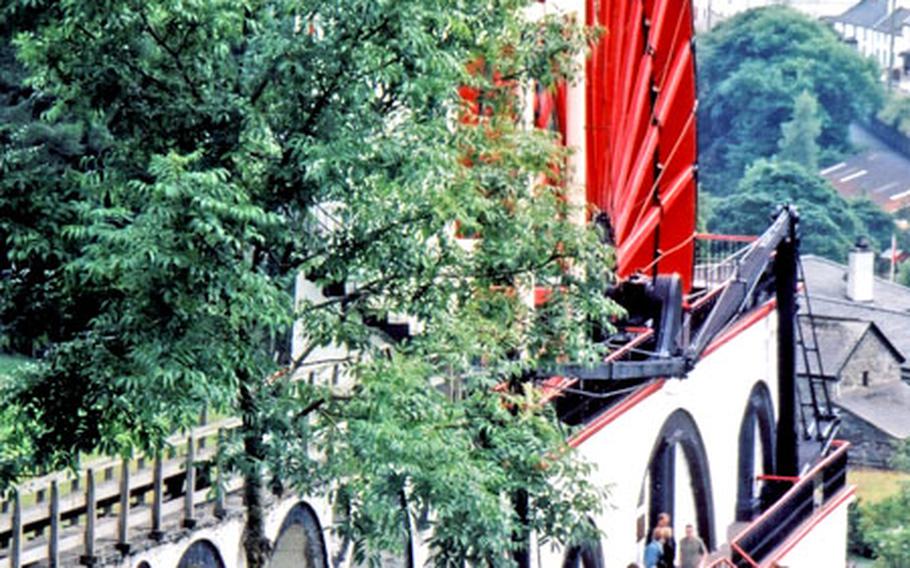 The Isle of Man’s symbol, Lady Isabella of Laxey, is one of the world’s biggest waterwheels. A triumph of the Industrial Age, the wheel began operating in 1854. Today it operates only for the amazement of visitors. (Dennis Cavagnaro / Special to S&S)

The Isle of Man is small, has just 76,000 residents and sits in a type of no-man&rsquo;s land in the Irish Sea.

But it is better known than a place of that description normally would be.

There is a good chance that filmgoers have seen the 227-square-mile island and its Victorian architecture, railroads, fields and pastures.

Several films have been shot on Man, thanks to a burgeoning film industry. They include &ldquo;Treasure Island,&rdquo; &ldquo;Alice Through the Looking Glass&rdquo; and &ldquo;Waking Ned Devine.&rdquo; In fact, Ned&rsquo;s rustic seaside cottage is a photographer&rsquo;s delight, and well worth a short auto detour off the A-27 at Dalby. Just head east and downhill on the lonely road to the coast and you&rsquo;ll see it at the water&rsquo;s edge.

A new film with Johnny Depp and John Malkovich, &ldquo;The Libertine,&rdquo; was filmed there last year and is due in September.

And those who know nothing else of the island may have heard of the tailless Manx cat. The breed is the result of a spontaneous mutation that occurred hundreds of years ago and resulted in kittens being born without the vertebrae that forms a normal cat tail. The isolation of the cats on the island resulted in dominant gene traits, including the lack of tail, which give the cats their distinctive look.

The Isle of Man is not part of the United Kingdom but is a Crown Dependency, with the queen of England serving as the Lord of Mann and head of state. Man has its own legislature &mdash; the Tynwald, more than 1,000 years old &mdash; its own currency (equal to the pound sterling) and postage system.

Though Man is on the whole pleasingly rural, it does have cities. The main one is Douglas, the capital and primary port. Castletown, Port St. Mary, Port Erin, Peel and Ramsey are important towns.

Douglas, on the east coast, is named for the two rivers that join there, the Dhoo and the Glass, forming the Douglas. Here, along the two-mile promenade facing the sea, is the greatest concentration of accommodations, nearly all Victorian. A few are hotels, but most are bed-and- breakfast places. During the summer, reservations are a must.

A very beautiful, historic and important Victorian building on the Promenade is the Gaiety Theatre and Opera House. It will be presenting the musical &ldquo;Chicago&rdquo; in July. Surprisingly, the Promenade is ringed by tall palm trees, thanks to the warm Gulf Stream surrounding the island.

The Isle of Man Steam Packet operates ships between Douglas and Heysham Port in England the year around. The ships land at the sea terminal at the southern end of the Promenade. Today, in certain seasons, the 19th-century Douglas Corp. horse trams meet the ships. Watch the tram driver change direction by unhooking his horse and bringing it around to the other end of the tram.

The working horses you see will enjoy a comfortable retirement. Visitors can meet and feed them at the Isle of Man Home of Rest for Old Horses, along Richmond Hill in Douglas.

The Victorian horse trams &mdash; because of their cross benches they are known locally as &ldquo;toast racks&rdquo; &mdash; are a unique statement attesting to Man&rsquo;s relaxed, unhurried pace of life. The horse trams trundle along on 3-foot gauge rails and come within a few blocks of connecting the colorful and historic, but still operating, Isle of Man Steam Railway and the Manx Electric Railway, also running on 3-foot gauge.

The electric railway trains &mdash; an electric car pulling a trailer &mdash; climb north out of Douglas from the Derby Castle along the spectacular east coast for 17&frac12; miles. The double-track trolley line passes Groudle Glen, where on weekends volunteers operate a short steam railway, to Laxey and on to Ramsey.

Laxey, or &ldquo;Salmon River,&rdquo; is in a glen over which the vintage trams pass on a curved, stone viaduct, making a stop for visitors to climb aboard yet another electric tram, the Snaefell Mountain Railway, which in 4&frac12; miles climbs to the top of Snaefell, or Snow Mountain, the island&rsquo;s highest peak.

The island&rsquo;s symbol, Lady Isabella of Laxey, is one of the world&rsquo;s biggest waterwheels. A triumph of the Industrial Age, the wheel began operating in 1854 to pump water from the lead mines that go to depths of 2,000 feet. Today the wheel operates only for the amazement of visitors.

Enroute to Ramsey, the tracks pass through rich farmlands with multicolored fields separated by stone fences. Here are the shaggy, long-horned Angus cattle, black-faced sheep and the occasional pheasant. The many glens look like rain forests with huge ferns. A fertile imagination would expect them to be hiding dinosaurs.

Also leaving from Douglas, is the Isle of Man Steam Railway, which departs to the southwest from an ornate 19th-century red-brick station. A 1905 steam locomotive pulls a train of flat- roofed coaches with individual compartments. Think Hogwarts Express and an opportunity to meet other passengers.

The route briefly skirts the sea but mostly crosses fields and the A-25 Castletown Road. Castletown is the most important station stop. This city, the former Manx capital, boasts a medieval limestone castle in remarkably good condition. The locals believe Castle Rushen to be one of the most complete castles in the British Isles, and a self-guided tour leads through most rooms and levels. The castle is currently &ldquo;ruled&rdquo; by a sociable and fearless Manx cat named Gorrym (the name is Manx Gaelic for the color blue).

The Viking, one of two pubs by the railway station, serves a nice lobster for lunch.

The steam train passes the station for Port St. Mary, a small, charming seaside town with a curved seafront road. It is also Victorian and has a beach. Reg and Kath Berrie welcome guests at their well-appointed, 19th-century bed-and-breakfast, the charming Aaron House. It is a nice choice for couples who seek comfortable privacy.

The train terminates at the slightly larger seaside resort of Port Erin. Like the other towns, Port Erin is walkable, and many of its restaurants serve seafood.

Part of the station has been converted into a Manx railway museum and gift shop. Here the locomotive runs around the train so it will be on the head end for the return trip to Douglas. The summer railway schedules allow for stopovers at the line&rsquo;s stations.

Visitors should also go to Peel, the major west coast town and the only one on Man with a cathedral &mdash; in fact, two. One is the medieval ruin of St. German&rsquo;s, within the walls of Peel Castle.

Visit Peel&rsquo;s great museum, the House of Manannan, which is an interactive heritage center that interprets island life from pre- historic time to the present. Archaeological exhibits include remains from the Viking settlement that was once there.

Dennis Cavagnaro, a retired Marine, is a frequent traveler and freelance writer who lives in California.