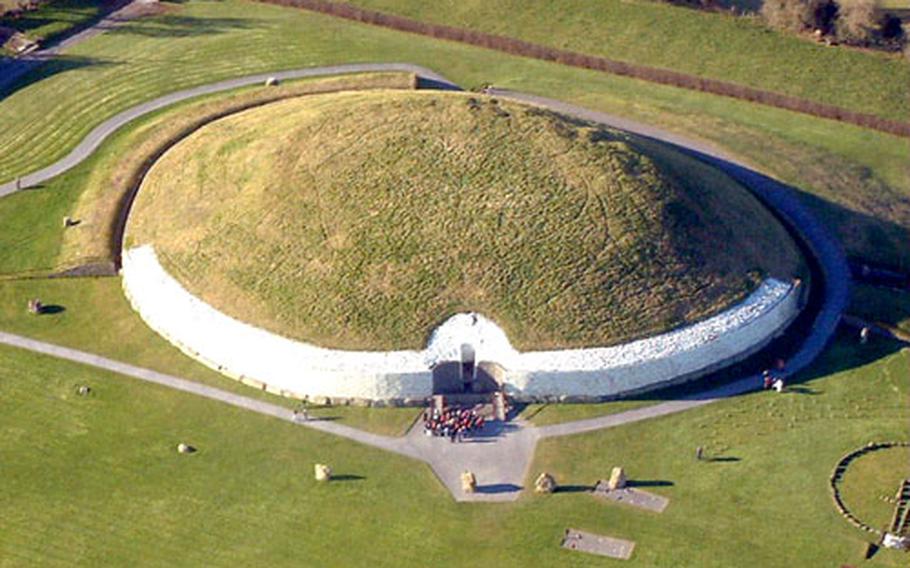 The Newgrange passage tomb has been designated a World Heritage Site by UNESCO and attracts 200,000 visitors per year. (Photo courtesy of Michael Fox, Knowth.com)

About a 30-minute drive from Dublin, there&rsquo;s a fertile valley nestled in a meandering loop of the Boyne River.

In the Stone Age, an advanced civilization made this tranquil spot home. Settlers raised livestock and tended their crops. As accomplished artists and engineers, they also built ring forts, barrows and sacred enclosures.

Today, more than 300 such ancient mounds are scattered across northeastern Ireland. The most intriguing are called passage tombs, owing to a long corridor leading to a central cross-shaped chamber. Historians long believed the dead were left in these chambers to begin their journey to the Other World.

That association with burial rites overshadowed another aspect of these enigmatic cairns. Rife with symbols and astrological properties, today they are recognized as temples with great ritual significance.

Construction, done without benefit of the wheel or metal tools, took more than 20 years, according to experts. Workers dragged 200,000 tons of loose stones to the mound, digging them from the earth by hand and hauling them 30 miles to the hilltop.

Artisans carved elaborate swirls, zigzags, diamonds, spirals and other geometric designs into the stones. Workers are said to have cut their hands, smashed fingers and feet, fell to disease and drowned in the river while creating these monuments.

The most important is Newgrange. Carbon dating shows it to be one of the oldest man-made constructions on Earth, older than Egypt&rsquo;s ancient pyramids by some 700 years and Stonehenge by 1,000.

Built around 3200 B.C., the heart-shaped hill occupies more than an acre and is surrounded by 97 massive curbstones, some richly decorated with geometric carvings. The tomb is 36 feet high and has a diameter of 280 feet.

The heart is the inner chamber where three recesses &mdash; small rooms &mdash; form a cross. The intricate corbeled ceiling reaches a height of 20 feet, although the narrow entry passage is much lower. Overlapping stones form a conical dome, topped by a single capstone. This ceiling has been intact more than 5,000 years and still keeps the inner chambers dry.

One of the most impressive features of Newgrange can be seen during the winter solstice. At this time, the sun&rsquo;s rays penetrate a unique roof box, crawl slowly up the tight 62-foot-long pathway and light up the central burial chamber.

Much about passage tombs remains a mystery. No written language existed at the time of their construction. Sophisticated measuring devices had not yet been imagined.

How could they have designed so precise a structure? Whose remains were left inside? What form of ceremony accompanied interment? What was the significance of the winter solstice?

The last question in particular draws a lot of interest. There is a high demand from visitors who want to see what the interior looks like at this time. A lottery is held to determine who will be admitted: In 2005, nearly 27,000 applications were submitted.

In October, 50 names are drawn, the winners gaining access to this mystical and memorable place.

Jim Sajo is a freelance writer living in northern Italy.

If you go ...Getting there: Ryanair, www.ryanair.com, and Aer Lingus, www.aerlingus.com, have frequent flights from throughout Europe.

Access to Newgrange is by guided tour from the Br&uacute; na B&oacute;inne Visitor Center, a short distance north of Dublin.

To drive there, take the M1 motorway north and get off at the Donore Exit near Drogheda, (the Br&uacute; na B&oacute;inne center is clearly marked before the exit). The toll is 1.50 euros. Continue about four miles to Donore, turn right, passing Daly&rsquo;s Br&uacute; na B&oacute;inne Bar and Restaurant, and go another mile. Parking is on the right.

An alternate route is to take the N2 north via Ashbourne toward Slane. Turn right about a mile south of Slane, the visitor center is 4&frac12; miles east toward Donore. For the last two miles, the road follows the meandering bend in the river Boyne.

Tour: The tour of Newgrange and the nearby Knowth passage tomb costs 2.75 euros for adults, 2 euros for group members, senior citizens, children and students, 7 euros for families. While waiting for the tour to begin, visitors can examine the models of the Boyne Valley and watch a short movie on the history of this fascinating corner of Ireland. They can also pick up an application at the reception desk for a visit during the winter solstice. Applications are also available by request at brunaboinne@opw.ie. For more information, see the center&rsquo;s Web site, www.knowth.com/newgrange.htm.

Lodging: The Egans House Hotel, a bed-and-breakfast near Dublin&rsquo;s city center, is convenient, inexpensive and clean. Its Web site is www.eganshouse.com, and its e-mail address is info@eganshouse. com.