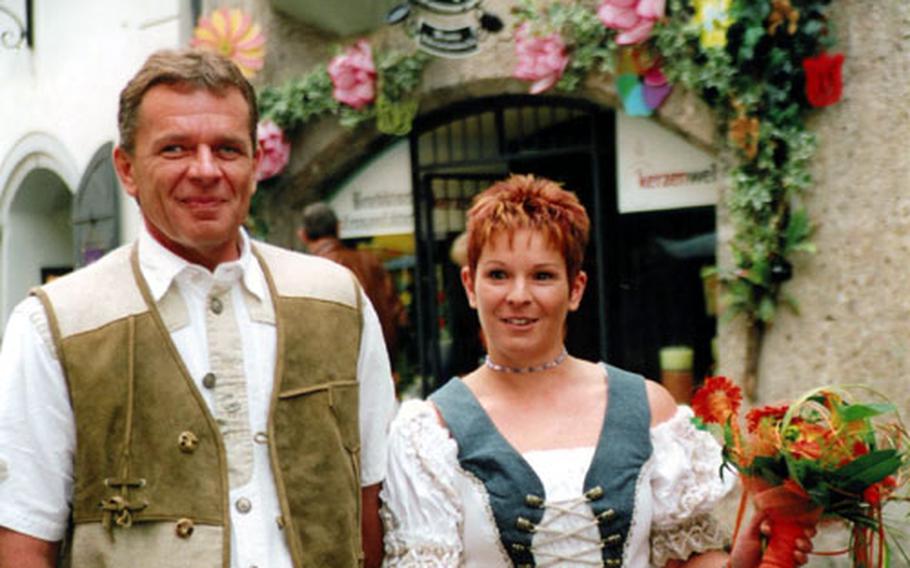 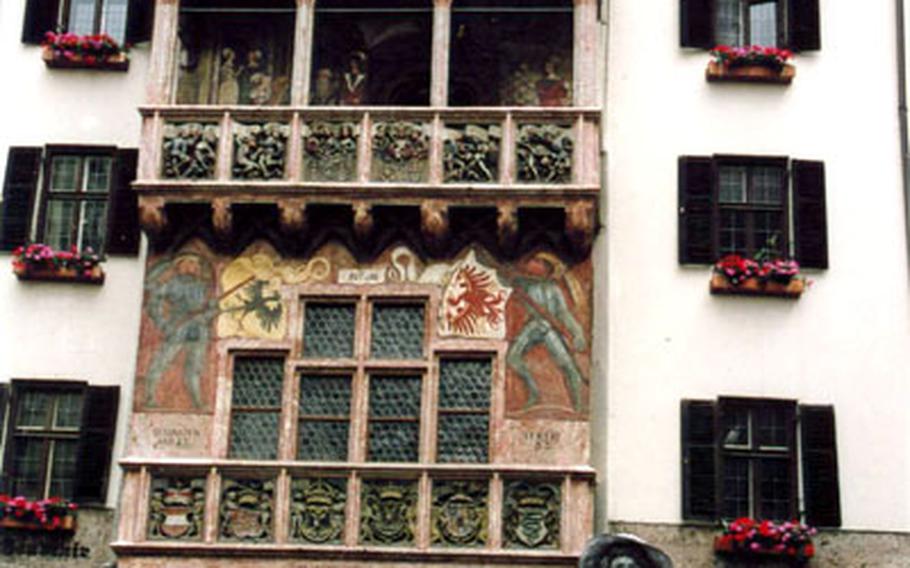 A silver-painted street performer poses for photos in front of the famous Goldenes Dachl, or “little golden roof,” in Innsbruck. (Leah Larkin / Special to S&S) Innsbruck, the capital of the Austrian province of Tirol (Map), is a winter paradise. Go when the snow is falling and you&rsquo;re likely to see the streets full of folks with skis on their shoulders because seven ski resorts are within an hour of the city center.

In summer, those who come to hike the mountains, including the new Eagle Trail, may use the city as a base, or a place for a quick visit. A walk through the old town with its arcaded buildings from the Middle Ages is a treat.

Innsbruck means &ldquo;bridge over the River Inn.&rdquo; The fast-moving chalky green water of the river slices through the city, its color due to the snow and glaciers from which it originates.

The city&rsquo;s main street, Maria Theresien Strasse, is named after Empress Maria Theresa, who ruled for 40 years. It is bordered with impressive Baroque buildings and is also the site of the city&rsquo;s St. Anne&rsquo;s Column. The column has a statue of the virgin Mary, not St. Anne, on the top. St. Anne has a place at the base of the column, which commemorates July 26, 1703, the birth date of the saint and the day Bavarian troops liberated Innsbruck during the War of the Spanish Succession.

Maria Theresien Strasse becomes Herzog Friedrich Strasse as it enters Innsbruck&rsquo;s charming old town, leading to the main attraction, the Goldenes Dachl, or &ldquo;little golden roof,&rdquo; built in 1500. Emperor Maximilian I had the roof built on an ornate balcony to honor his marriage to his second wife, Maria Bianca Sforza. The decorative and curious roof is adorned with 2,600 gilt copper tiles that glisten in the sun.

During Maximilian&rsquo;s day (1493-1516), Innsbruck was a cultural center because the emperor &mdash; who loved the mountains, the outdoors and hunting &mdash; preferred the town to Vienna and spent lots of time there. He wanted to have a church built in the town to house 40 statues, but the church, the Hofkirche, didn&rsquo;t see fruition until the reign of his grandson, Ferdinand I. It contains Maximilian&rsquo;s mammoth coffin, which is empty because he is buried near Vienna.

During Maximilian&rsquo;s lifetime, only four of the statues were completed, but the project continued after his death and today 28 bronze statues, life-size or larger, surround the empty marble sarcophagus. They represent his forebears and eminent contemporaries, and are an impressive sculpture group of German Renaissance art standing guard around the empty tomb.

Maria Theresa gave the city its Imperial Palace, the Hofburg, where you can take a tour though many of the lavish Rococo rooms. One grandiose hall features life-size portraits of her 16 children. Gigantic chandeliers, frescoed ceilings and priceless furniture decorate other rooms.

A guide pointed out the napkins on the plates of elegant table settings in the dining room. The way the napkins are folded, to resemble a flower, is a national secret known only by two employees of the Hofburg in Vienna, she said.

To get an idea of how the other half in Tirol lived, visit the Tiroler Volkskunst Museum with displays depicting the traditional life of the province&rsquo;s peasants. Until 1950, 80 percent of Tiroleans worked in agriculture. Today that&rsquo;s down to 15 percent, with most people working in the towns. Tourism is the major industry of the province.

On the edge of Innsbruck is the imposing legacy of the two Olympic Games held here, the ski jump, which was completely redone in 2002. Take the elevator to the top for great views of the city and its mountains.

For more mountain vistas, you can ride a cable car from the center of town to the top of 7,600-foot Mount Hafelekar. There are hiking paths from the top, as well as numerous other hiking trails near the city. Free shuttle service for hikers to departure points for mountain treks is available. Until Oct. 2, the city also offers a free walking and hiking program with guides from the Innsbruck Alpine School leading hikes.

Savvy visitors will buy the Innsbruck card, which provides entrance to all city museums, including the Imperial Palace, use of buses and trams, and a ride on the mountain cable car. A card valid for 24 hours costs 23 euros. The cable car ride alone costs 23.30 euros. You can buy the card at the main city tourist office at Burggraben 3, or at the tourist offices at the train station, museums, the cable car and major hotels.