In WWII, Japanese-Americans used common language against the enemy 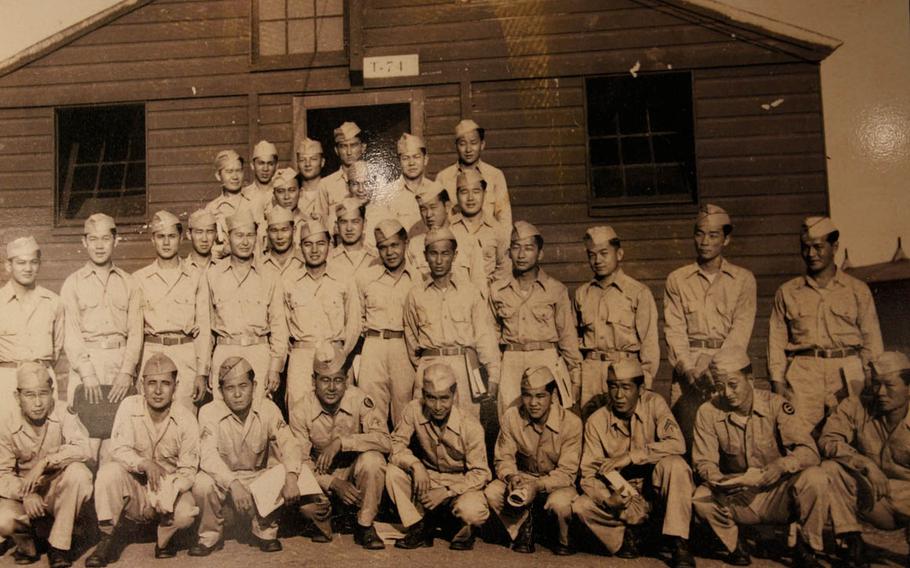 Students of the language school pose in front of a building at Camp Savage in Minnesota in 1944 in this photo from the exhibit "America's Secret Weapon: Japanese Americans in the Military Intelligence Service in World War II." (Wyatt Olson/Stars and Stripes)

Students of the language school pose in front of a building at Camp Savage in Minnesota in 1944 in this photo from the exhibit "America's Secret Weapon: Japanese Americans in the Military Intelligence Service in World War II." (Wyatt Olson/Stars and Stripes) 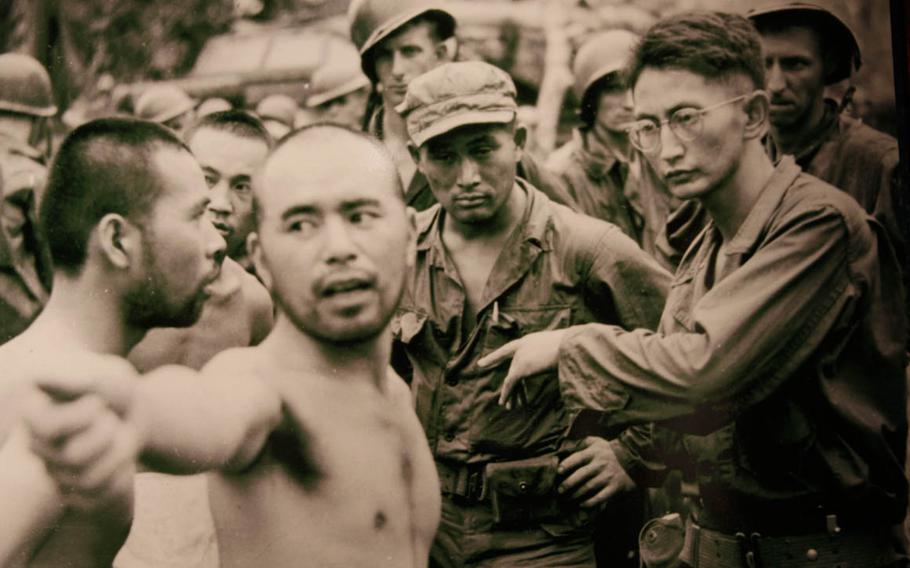 Japanese prisoners answer questions from MIS Nisei interrogators Harry Fukuhara, right, and Shoji Ishii, in this 1944 photo on display at the U.S. Army Museum of Hawaii’s exhibit on the role of Japanese-Americans during World War II. ( Wyatt Olson Stars and Stripes) 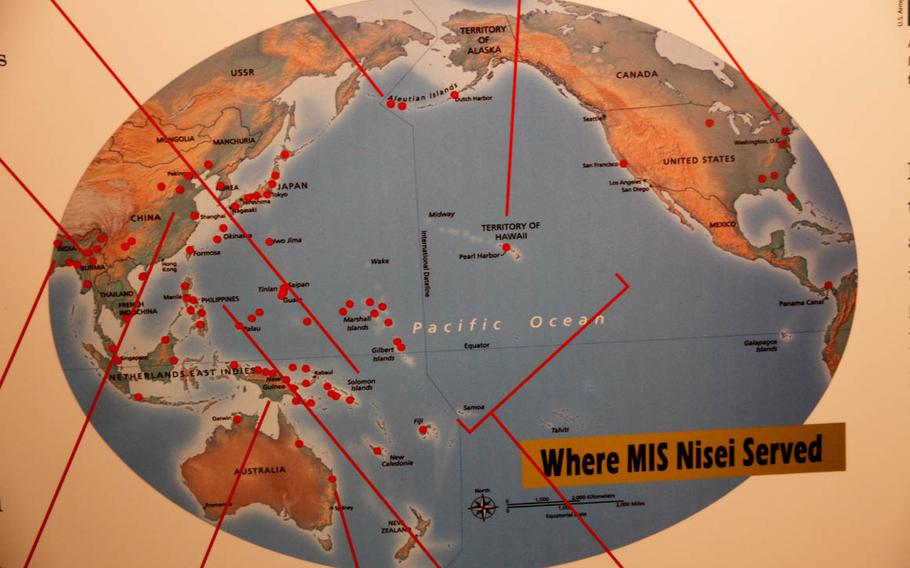 The MIS Nisei went wherever the fighting moved during the war in the Pacific. (Wyatt Olson/Stars and Stripes) 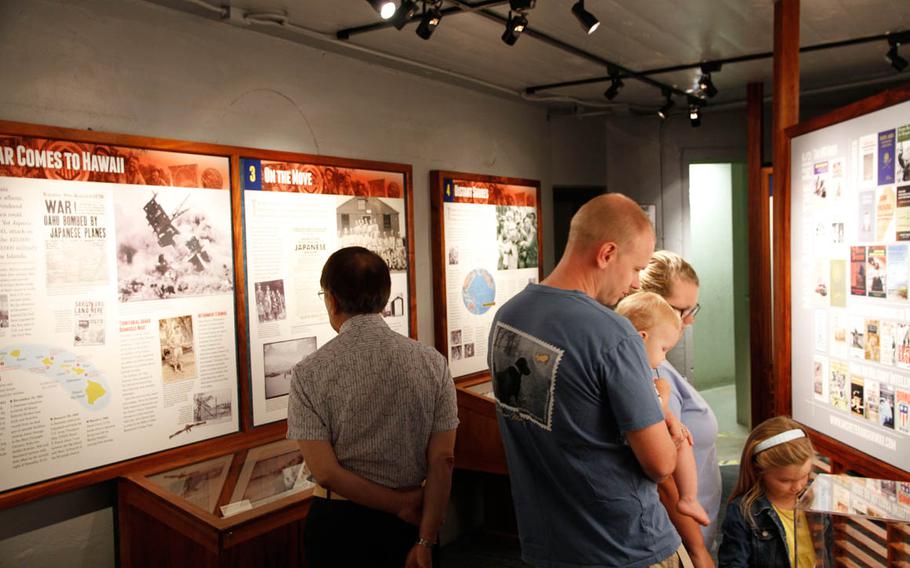 Visitors to the U.S. Army Museum of Hawaii view the exhibit on the role of Japanese Americans working in the intelligence field during World War II. ( Wyatt Olson Stars and Stripes) 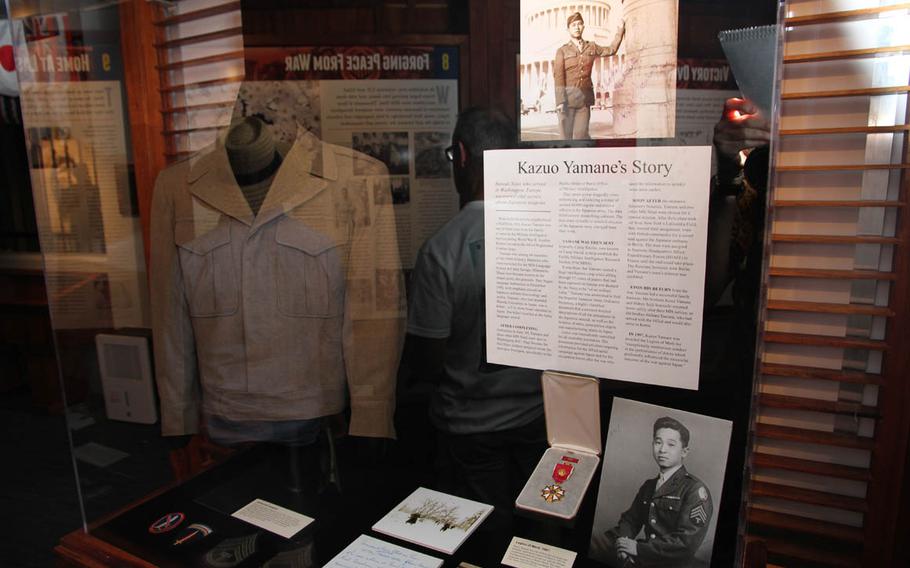 This display offers details of the work done during World War II by Kazuo Yamane, who discovered an inventory of all arms held by the Japanese Imperial Army while sifting through Japanese-language documents previously deemed of no value. ( Wyatt Olson Stars and Stripes) 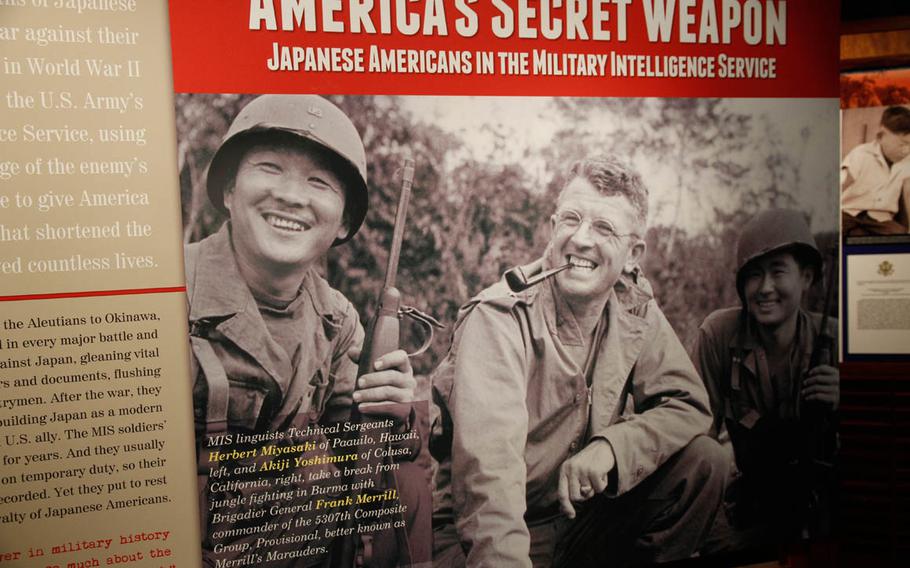 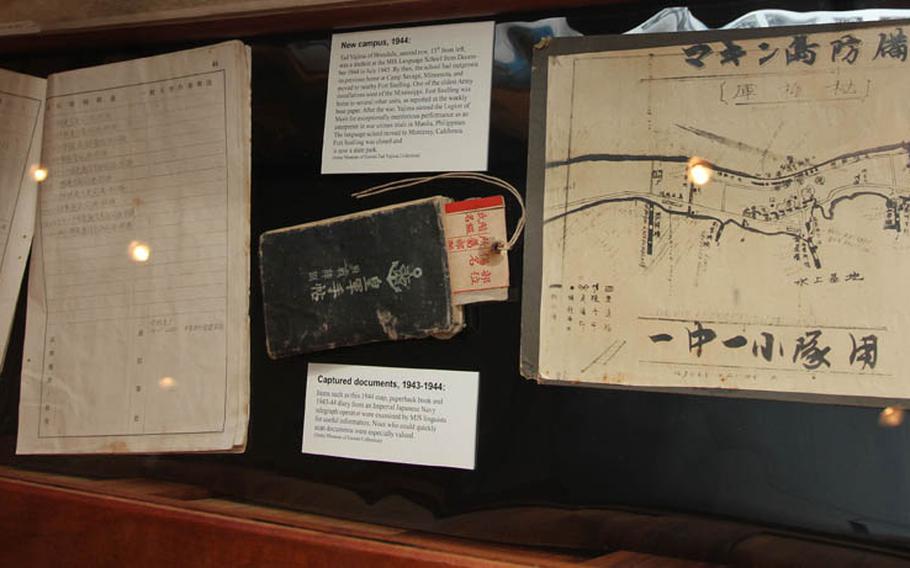 A map, paperback book and diary are examples of items captured from the Japanese during World War II and routinely reviewed by members of the MIS Nisei for useful intelligence. The items are on display at the exhibit "America's Secret Weapon: Japanese Americans in the Military Intelligence Service in World War II" at the U.S. Army Museum of Hawaii. ( Wyatt Olson Stars and Stripes)

Thanks to Hollywood, most of us know about the Navajo Indians who served as top-secret code talkers in the Pacific theater during World War II, speaking in their native language to keep American communications secure from the enemy.

And the recently released “The Imitation Game” is an account of the Allies’ highly furtive and successful effort during the same war to break the code used on Germany’s Enigma cipher machine.

Lesser known are the efforts of hundreds of Japanese-Americans — most of them nisei, second-generation immigrants — who served in the Military Intelligence Service during WWII, acting as translators, interrogators and spies. Often close to the front lines, they also saw their share of combat, in which dozens died.

“The MIS Nisei was an untold story,” said Pierre Moulin, author of numerous books about the nisei, including “American Samurais: WWII in the Pacific.”

“The unit was recognized 55 years after the war. They never talked about those guys.”

It wasn’t until the 1970s that the existence of MIS Nisei units became public, and not until 2000 was their service publicly recognized with the Presidential Unit Citation.

An exhibit at the U.S. Army Museum of Hawaii sheds some light on these nisei, who were instrumental in assisting America’s strategy and tactics in the Pacific.

The small but jam-packed exhibit contains photos, relics, documents and details about their roles during the war and in the years immediately after as the U.S. helped to rebuild the nation. Several short videos in the exhibit feature the voices of MIS Nisei recalling their training and the difficulty of gaining the trust of compatriots who were fighting the Japanese.

Sometimes walking that line was dangerous. One MIS Nisei quoted in the exhibit remembered being cut off from his unit during combat in Okinawa. He found himself crouching in a bomb crater between U.S. and Japanese positions.

“Every time I stuck my head up, both sides would shoot at me,” he said. “I had a Japanese face and an American uniform.”

Many of the MIS Nisei came from Hawaii, which had a huge influx of Japanese immigrants after Hawaiian King Kalakaua visited Japan in 1885 in an appeal to Emperor Meiji for workers for the islands’ plantations. By 1940, Japanese were Hawaii’s largest ethnic group, making up almost 40 percent of the territory’s population.

About three-quarters of them were nisei, and many were inducted when the U.S. began the draft in 1940 in anticipation of war with Germany and, possibly, Japan. Hundreds of nisei eventually were pulled out of their Hawaiian units and sent to Camp McCoy in Wisconsin, where they became the backbone of the 100th Infantry Division that fought in Europe.

The Army established a language school at the Presidio in San Francisco in the spring of 1941, and about 60 students began studying there in the fall, all but a few nisei.

But with the surprise attack on Pearl Harbor on Dec. 7, 1941, the world quickly changed for Japanese-Americans, including the nisei at the language school.

President Franklin D. Roosevelt signed executive order 9066 in February 1942, authorizing the relocation of more than 110,000 Japanese-Americans in the West to camps. Many draft boards classified Japanese-Americans as “enemy aliens.”

The language school was moved to Camp Savage in Minnesota because it was one of the few states that would tolerate the Japanese-American students. Early graduates were sent to Australia, the southwest Pacific and the Aleutian Islands. Their first battle with the enemy was in Guadalcanal in December 1942.

The existence of MIS Nisei was highly secret during the war.

According to Moulin, the Japanese Imperial command believed Emperor Hirohito was held in such high regard by expatriates around the world that none would cooperate with the Allies in undermining him.

That assumption allowed an MIS Nisei unit in Paris to readily monitor communications by the Japanese embassy, which did not even bother to code messages concerning German troop movements, Moulin said.

As the Allies moved through the Pacific, retaking islands occupied by Japanese forces, the MIS Nisei were adept at convincing soldiers holed up in caves to give up the fight.

There were 50 MIS Nisei at Iowa Jima, according to Moulin. “They’d go to every cave with a flashlight and a white flag to talk to the Japanese to surrender. They got 1,200 guys to surrender to them in Iwo Jima.”

Hoichi “Bob” Kubo was awarded the Distinguished Service Cross for such work in Saipan. In one instance, he scaled a steep cliff to a cave where Japanese soldiers were holding dozens of civilians and threatening to kill them.

With his training and understanding of Japanese tradition, he appealed to the soldiers at differing levels. He told them that his grandfather had fought for Japan in the war against Russia, but because his new homeland was America, he had a filial duty to it, not the emperor.

And his final point: America had “honored” him by making him a sergeant, and he outranked the soldiers in the cave.

Kubo walked out of the cave with 122 civilians and nine soldiers.

Other achievements by the MIS Nisei aided in the Allies’ overall strategy.

Among the senpai gumi, or pioneers, of the MIS Nisei, Yamane was perusing 15 crates of papers retrieved from Saipan considered by the Navy to be “of no military value.” He was gobsmacked to discover the complete inventory of ordnance held by the Japanese Imperial Army, including location of all arms, ammunition depots and manufacturing plants in Japan.

Yamane was awarded the Legion of Merit in 1997.