In Japan, it's time for the 'Big 5' festivals An impressive dance parade takes place along the main street in Morioka. Groups of dancers, performers with drums and flutes parade nearly 1 kilometer from 6 to 10 p.m. for three nights. (Courtesy of Morioka City)

An impressive dance parade takes place along the main street in Morioka. Groups of dancers, performers with drums and flutes parade nearly 1 kilometer from 6 to 10 p.m. for three nights. (Courtesy of Morioka City) 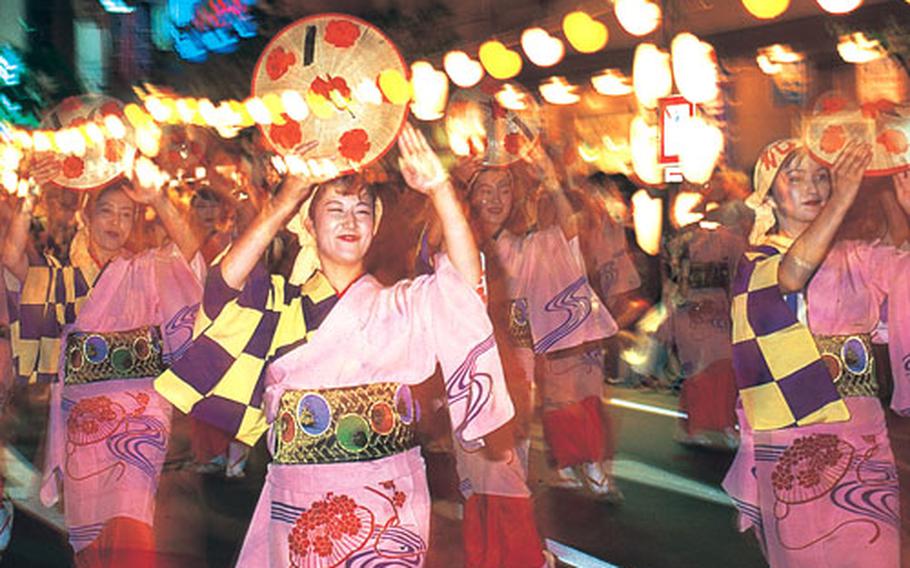 From August 5 to 7, the main thoroughfare of the Yamagata City is taken over by parades of people in cotton kimono (yukata) and flowered staraw hats, dancing and singing the hanagasa ondo music. (Courtesy of Yamagata City)

Japanese tourists flock to northern Honshu every year for a host of large summer festivals.

And the trend has increased more in modern times due to the popularity of bullet trains and other mass transportation here in Japan.

One great reason to head north is the cooler summer temperatures, but the festivals in Tohoku also have something different that attracts the party goers. They are exotic and demoniac &#8212; passionate and sometimes pathetic. Their festivals are often held at night and burning colors of floats glare in the dark night.

Tohoku means &#8220;northeast.&#8221; The exact location is in northern Honshu, consisting of six prefectures &#8212; Aomori, Akita, Iwate, Yamagata, Miyagi and Fukushima. Temperatures tend to stay low, and in winter they have a lot of snow.

The people of Tohoku are known for their honesty, diligence and faithfulness, while they&#8217;re also known for being shy and introverted. However, under the subtleness of their personalities lies their strong, hidden passion.

For the people of Tohoku, the summer is short &#8212; and they take advantage of these festivals to release some of the energy and passion stored up during the long, dark winters.

The five great festivals of Tohoku are briefly characterized:

Sansa Odori is a form of Bon dance and dates back more than 230 years. It is said that originally people performed this dance in the precincts of the Mitsuishi Shrine to celebrate the banishment of evil spirits. The impressive dance parade takes place along the main street in Morioka for three nights. Participating groups of dancers are 20,000, performers with drums, 10,000 and flutes 1,500 for three days and parade nearly 1 k.m. It ends with a circle dance that anyone can join. 6 to 10 p.m. Spectators last year were presumed to be 500,000; Chuo Street of Morioka City; JR Tohoku Honsen Line Tohoku Shinkansen Morioka Station; 019-624-5880

The &#8220;Nebuta&#8221; (illuminated papier m&#226;ch&#233; dummies representing men, animals and birds) are placed on carriages and pulled through the streets at night. The parade accompanies music of flutes and fifes. Origin of Aomori&#8217;s Nebuta Matsuri is believed to be the legend of General Sakanoue no Tamuramaro&#8217;s conquest of Ezo people &#8212; aboriginal inhabitants of Tohoku district in about 800 A.D. The government forces frightened the Ezo tribes with the huge lighted floats.

Brightly costumed young men balance bamboo poles hung with 22 to 46 lanterns on their palms, shoulders and foreheads as they parade through the city. The Kanto Festival originates in the Horyaku period (1751-63). It was the ceremony of prayer for good harvests and purification and is connected with the old ceremony of Neburinagashi, in which people purified and protected themselves from evil spirits. Since then, people in the Kubota castle town of Akita clan carried on the event. It was named &#8220;Kanto&#8221; in 1881 (Meiji 14). Last year 1.20 million spectators visited the festival; Kanto Oodori of Akita City; 7 to 9 p.m.; JR Ou Honsen Line and JR Akita Shinkansen to Akita Station; 018-863-2222

Known as the fourth largest festival in Tohoku, this event has been held in various forms for hundreds of years since the original form appeared in Obanazawa to the north. The dance performed in the Hanagasa Matsuri is called the Hanagasa Odori, and its motions are based on those of rice farmers of old, long before the advent of machinery. In its present form, waves and waves of dancers wearing colorful happi coats use wide hats decorated with flowers to express beautifully the meaning of the dance. Interspersed with the various groups of dancers are several floats, many of which carry drum players and famous entertainers. As this whole procession moves along Yamagata&#8217;s main street, participants cry out the traditional &#8220;gyassho, makasho&#8221; in accompaniment to the Hanagasa Ondo (song). More than 10,000 townspeople, each wearing a low round sedge-hat adorned with artificial flowers, dance their way through the city&#8217;s streets. Recommended day is Aug. 5; Along the National Highway No. 112 from Tokamachi to Hatagomachi. Last year one million spectators visited the festival; 6 to 9:30 p.m.; JR Ou Honsen or JR Yamagata Shinkansen to Yamagata Station; 023-641-1212

The festival, the largest of its kind in Japan, is observed one month later than in most parts of the country. The streets are decorated with colored paper streamers and strips. The legend of Tanabata originated in a Chinese folk legend concerning two stars &#8212; the Weaver Star (Vega) and the Cowherd Star (Altair) &#8212; who were said to be lovers who could meet only once a year on the seventh night of the seventh lunar month. The festival was introduced to Japan and the Japanese people mainly by women, who prayed to the Weaver Star for success in love and proficiency in skills, such as sewing and weaving. The modern celebration of Tanabata varies widely according to locale. A common feature of this festival is the display of bamboo branches decorated with long narrow stripes of colored paper and other small ornaments and talismans. Last year the festival attracted 2 million spectators; streets from Sendai Station to Chuo Street and Higashi Ichiban Street; JR Tohoku Shinkansen to Sendai Station; 022-261-1111