In Japan, fall is marked by mikoshi parades 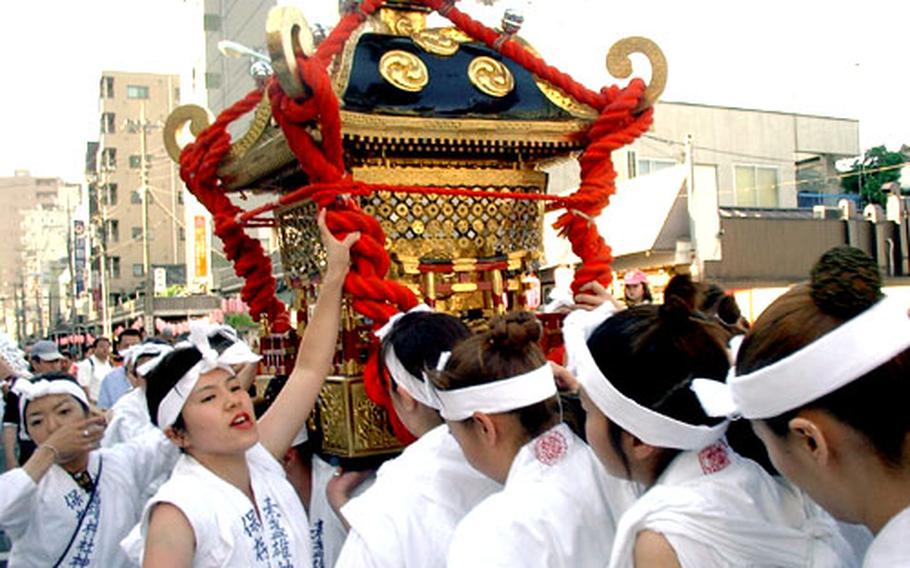 The women’s mikoshi is carried at the grand festival of Susanoo Shrine in Minami Senju, Tokyo, in June 2002. The women shoulder the portable shrine on two sticks, with no side sticks for added support. This allows for shaking of the shrine that is performed once every three years. The next full festival will be in 2005. (Hiroshi Chida / S&S)

The women’s mikoshi is carried at the grand festival of Susanoo Shrine in Minami Senju, Tokyo, in June 2002. The women shoulder the portable shrine on two sticks, with no side sticks for added support. This allows for shaking of the shrine that is performed once every three years. The next full festival will be in 2005. (Hiroshi Chida / S&S) A young spectator takes in the sights and sounds of a mikoshi parade. (Hiroshi Chida / S&S) 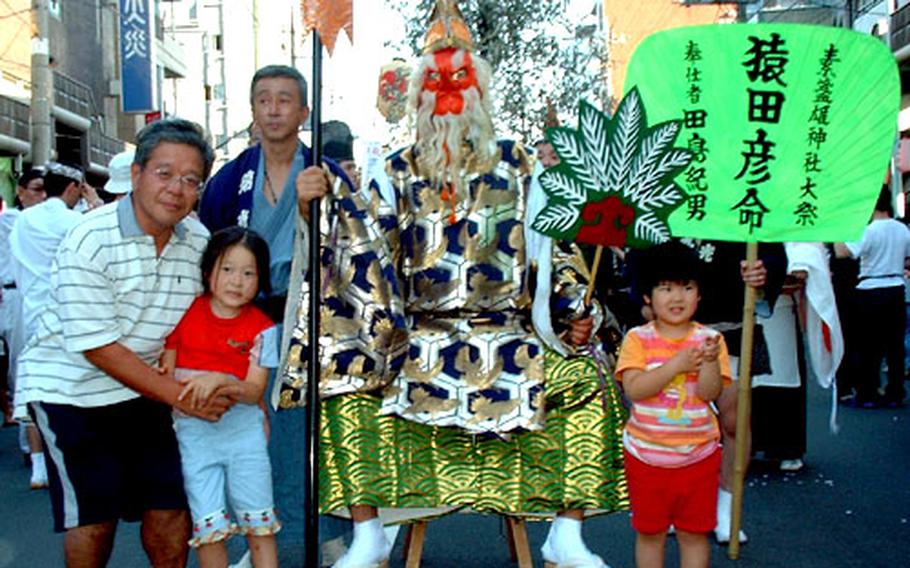 A Shinto god Sarutahiko (who is said to have led the vanguard of offspring of Amaterasu Omi no Kami to descend on earth) leads the parade at Susanoo Shrine in Minami Senju, Tokyo. (Hiroshi Chida / S&S) The Chief Priest of Susanoo Shrine in Minami-Senju, Tokyo, leads a mikoshi parade on a white horse. (Hiroshi Chida / S&S) 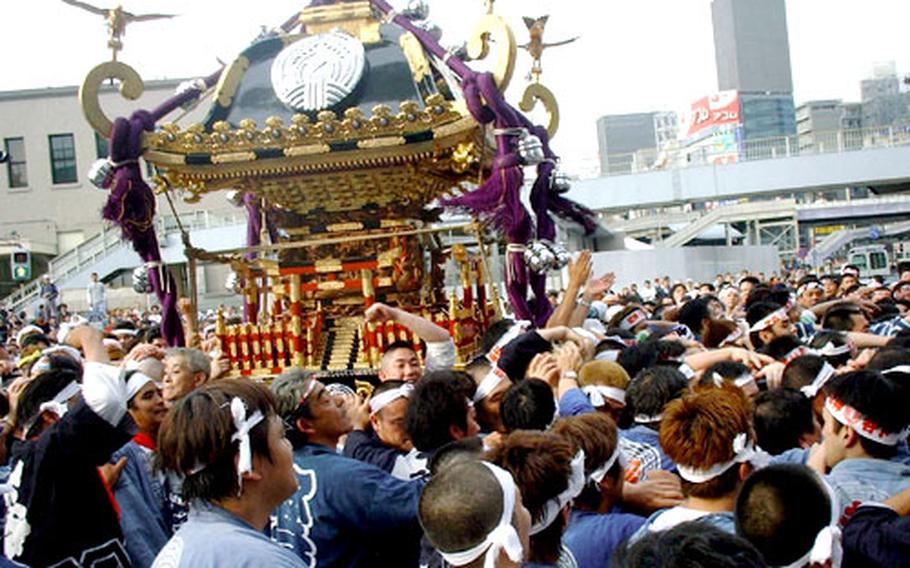 It is the season of Japan&#8217;s autumn festivals so expect to see mikoshi parades moving through many cities.

A mikoshi is not a miniature shrine or a portable shrine as Westerners call it. It is rather a sacred palanquin (a litter or couch placed on poles, and carried by men on their shoulders). The god or deity of the shrine at the time of the festival is placed on the palanquin and is carried out of the shrine by the parishioners to visit the community and bestow virtues on them.

The present palanquin-like structure of the mikoshi is believed to have its origin in the 8th century. The first recorded occurrence was the transfer of the deity of the Usa Hachiman Shrine in Oita, Kyushu, by palanquin to Nara where the deity was invited to safeguard the construction of the &#8220;daibutsu&#8221; &#8212; the Great Buddha statue at Todaiji Temple.

By the 10th century, it had become a common practice in Kyoto to carry the deity from a shrine through the community in a mikoshi on the occasion of ekijinsai, aimed at pacifying malevolent spirits that were believed to cause epidemics.

As for the deity, Goro Miyako of Nakadai, a mikoshi maker in Gyotoku, said there is a mirror put in front of the mikoshi&#8217;s center where the deity is placed. The mirror is put there so that people cannot see inside. Miyako said a holy paper with the name of the god is usually there. An official of Jinja Honcho &#8212; the Association of Shinto Shrines &#8212; said gods of Shintoism are spirits and do not have forms. It is not appropriate, therfore, for people to scrutinize and try to discover what they look like.

Most Japanese festivals derive from shintoism, a combination of the worship of nature, ancestors and purification. The chief deity in this pantheon is Amaterasu Omi no Kami, the sun goddess and great ancestress of the Imperial House.

There are several interpretations as to why the carriers sway the mikoshi. One maintains the tempestuous movement of the mikoshi is thought to reflect the turbulent character of the deity, while the other says swaying the mikoshi in all directions by young men (in recent time by women as well) is to amuse the god.

Often the mikoshi is placed in temporary resting places, where offerings of sake and food are made by the residents of the area. The mikoshi of Tomioka Hachimangu Shrine in Fukagawa, Tokyo is the largest. It weighs 4.5 tons and it requires 300 people to carry it. It cost $10 million to build in 1991 and was built by a mikoshi maker, Asako, in Gyotoku, Chiba Prefecture. It took two years to build and was donated by the president of Sagawa Express Company, the late Kiyoshi Sagawa of Kyoto. It is decorated with diamonds and rubies and was carried only one time &#8212; when it was donated. Comparitively, it takes 30 to 50 people to carry an ordinary mikoshi, which costs $100,000 and weighs about half a ton.

In a recent phenomenon, post-World War II, women were allowed to participate in carrying the mikoshi, according to a Jinja Shinto official of the shrine association. The official said a mikoshi was not carried by women before not because of prejudices against women, but because people thought women had different roles in the festival.