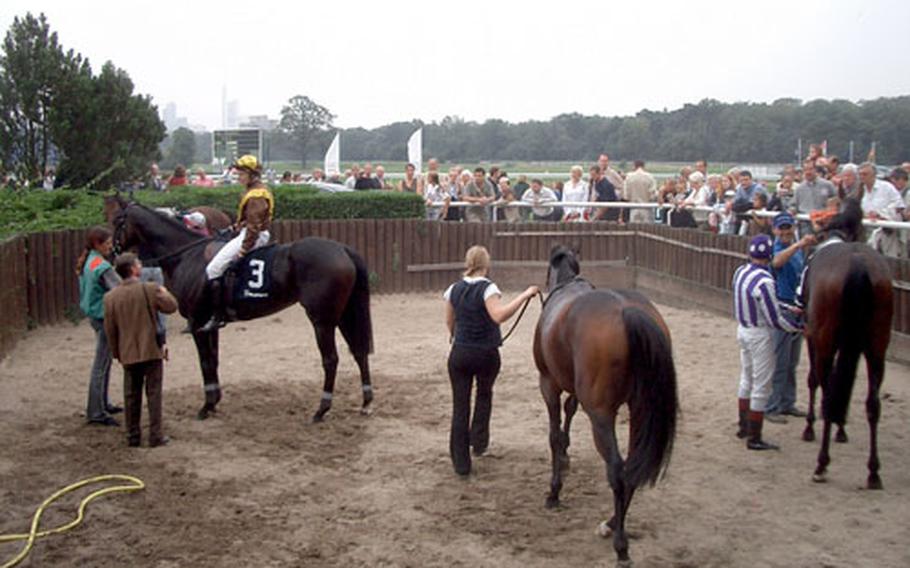 The race horses — winners and losers alike — are hosed down and groomed after a race. (Joseph Giordono / S&S)

The race horses — winners and losers alike — are hosed down and groomed after a race. (Joseph Giordono / S&S) 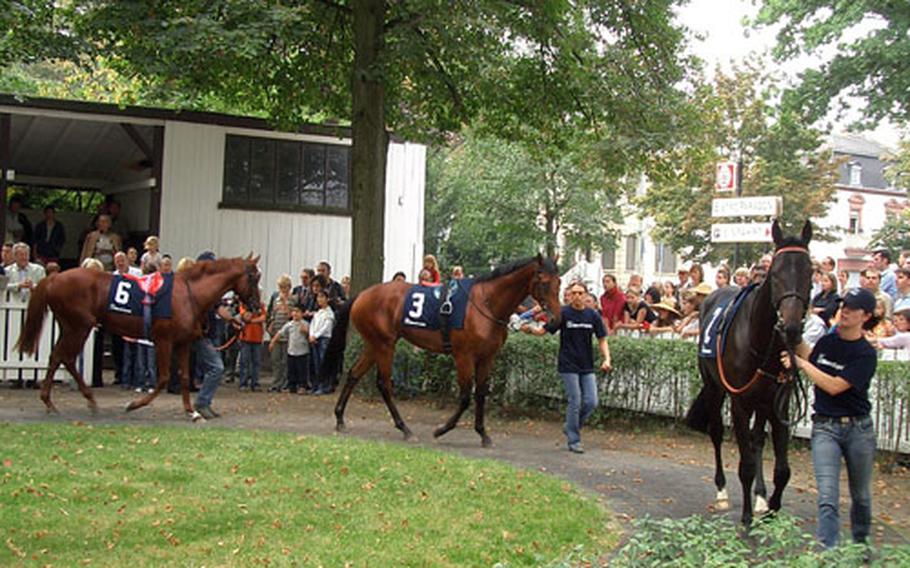 Racing fans and horse lovers watch as the horses loosen up in the paddock area before the next race at Galopprennbahn Frankfurt. (Joseph Giordono / S&S) 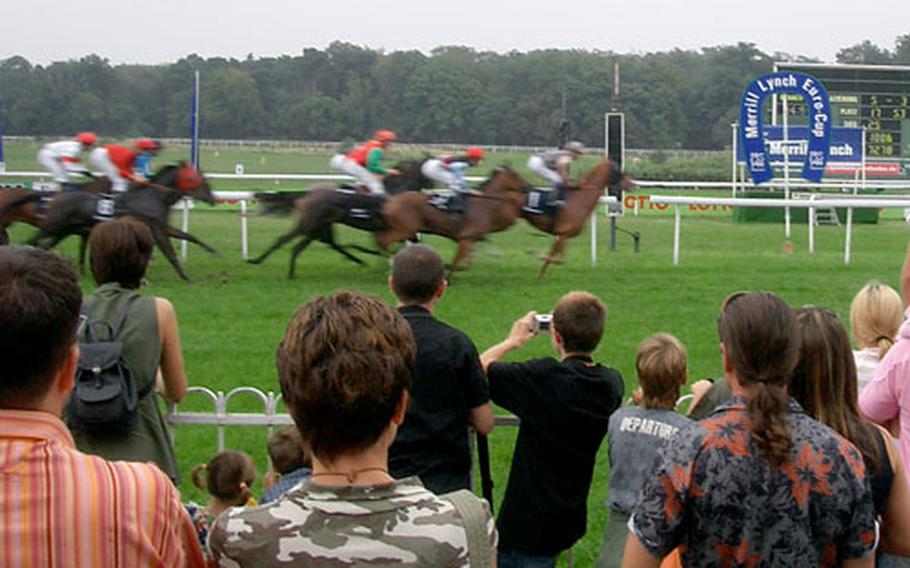 The horse races at the Galoprennbahn Frankfurt are a family affair. Perhaps half the crowd on a recent Sunday was families and children. (Joseph Giordono / S&S) 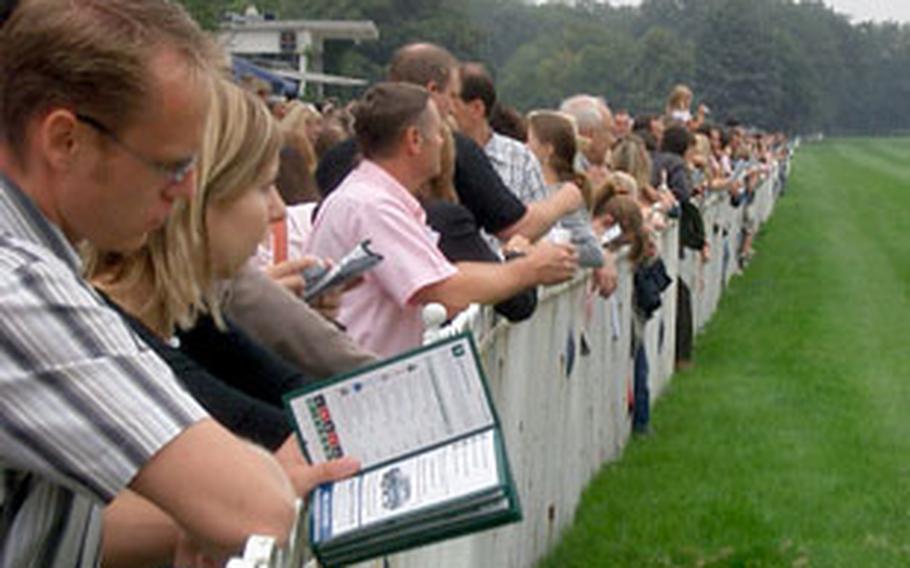 Patrons gather along the rail as they wait for another race to begin at the Galopprennbahn Frankfurt. (Joseph Giordono / S&S) 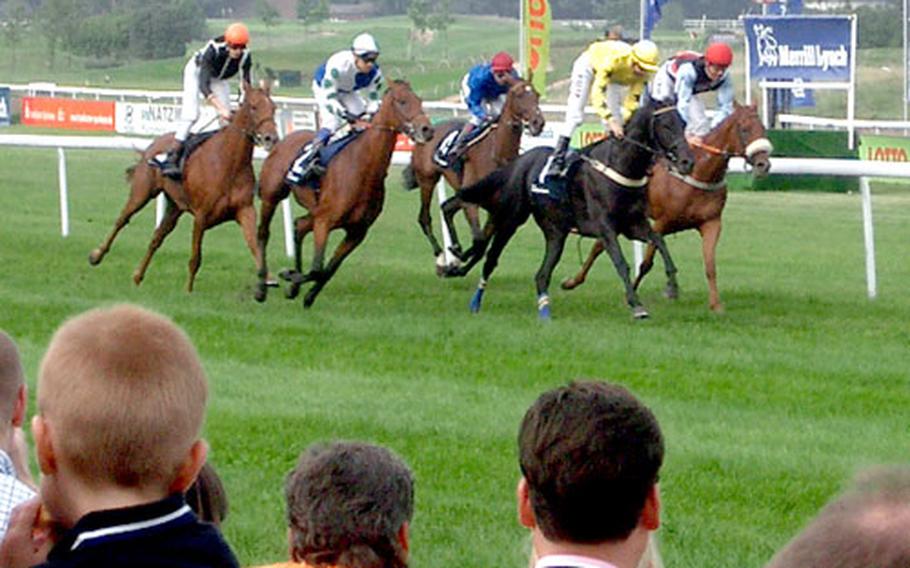 As they head toward the finish line at the Galopprennbahn Frankfurt, race horses are framed by the hazy skyline of Frankfurt, Germany. (Joseph Giordono / S&S)

It was some time around the sixth race that it hit me.

There were no shifty-eyed guys in worn slickers, desperately poring through the daily racing form for the tip that would turn their fortunes. There were no hangdog-looking guys scouring the ground and garbage cans for winning betting slips that had been carelessly discarded.

And come to think of it, there was only one woman in a polka-dotted dress and oversized hat.

But everything else about it was right: The sounds of pounding hooves, the straining of people on the rail as the horses rounded the far corner, and the bellowed pleading for a favorite horse to pull ahead.

Going to the horse track in Frankfurt, Germany, wasn&#8217;t all that different from how it was in the States &#8212; except the races were run on grass and the beer was better.

On a recent Sunday at the Galopprennbahn Frankfurt, the crowd was shockingly family friendly &#8212; nearly half the people there were parents and younger children. At the paddock, where horses and jockey are paraded before the race to allow bettors to get a final good look, kids far outnumbered adults.

At the betting windows, though, it was all business. The German system is a bit more limited than what you&#8217;d find at a stateside track. For most races, the only possible bets are:

For those who aren&#8217;t into betting, the track offers pretty much what you&#8217;d expect: a chance to sit in the grandstands, stand along the rail, take a close look at the horses and jockeys and, oddly, play a round of golf on the infield. (There is a small course inside the track, with a pro shop and instructors.)

And for the 30 minutes or so between each race, there is a large beer garden, several stands selling all manner of foods, a small playground for the kids, and sometimes a pony-ride area. At the September race I attended, there were probably 500 people present, but it never felt crowded.

As an added attraction, the Frankfurt skyline serves as the backdrop for the track, and on a clear day, the buildings sparkle in the sun.

But really, you&#8217;re there for the horses. The length of the races on the grass track vary in distance from 1,600 to 2,000 meters, with the starting point moving along the nearly oval track to accommodate the different lengths. As you&#8217;d expect, the jockeys all wear colorful tops and ride horses with names like Time at Time, Summernight Star and Flamingo Dream.

My favorite horse of the day was Nordt&#228;nzerin, because his win in the seventh race paid off our day&#8217;s entry cost, betting fees and a few glasses of Apfelwein to boot.

The track bills what it offers as &#8220;Der etwas andere Sonntags spaziergang,&#8221; or loosely, &#8220;another kind of Sunday walk.&#8221; And whether you&#8217;re there for the sport, the crowd-watching or a nice backdrop for a few afternoon drinks, the Galopprennbahn might be just the thing.

Know and GoWhen: The final two race dates of the season for the Galopprennbahn Frankfurt are Sunday and Nov. 11. The race season typically resumes in April, with about 10 race days, always on a weekend. The first race of the day started just before 2 p.m., and the final one began about four hours later.

How much: Admission for adults is 9 euros, a family pass is 14 euros, and members of a group of 10 or more pay 5 euros each. Entry to some parts of the grandstand were a little more. A typical beer will cost 3 euros.

For more information or directions for the train/strassenbahn, go to www.renn-klub-frankfurt.de.