Honolulu: Dinosaurs roar back at exhibition 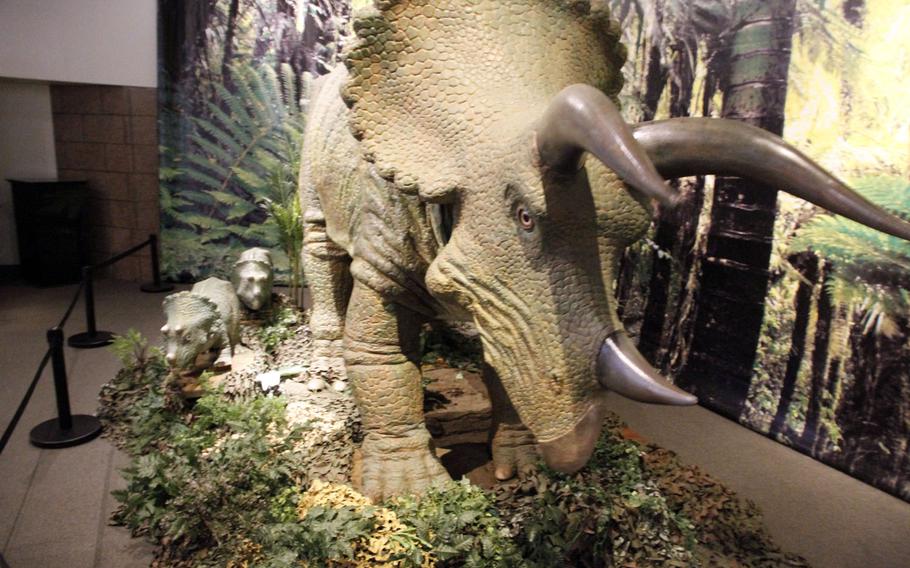 Buy Photo
A triceratops appears to eye visitors as two of its young walk beside it. (Wyatt Olson/Stars and Stripes) 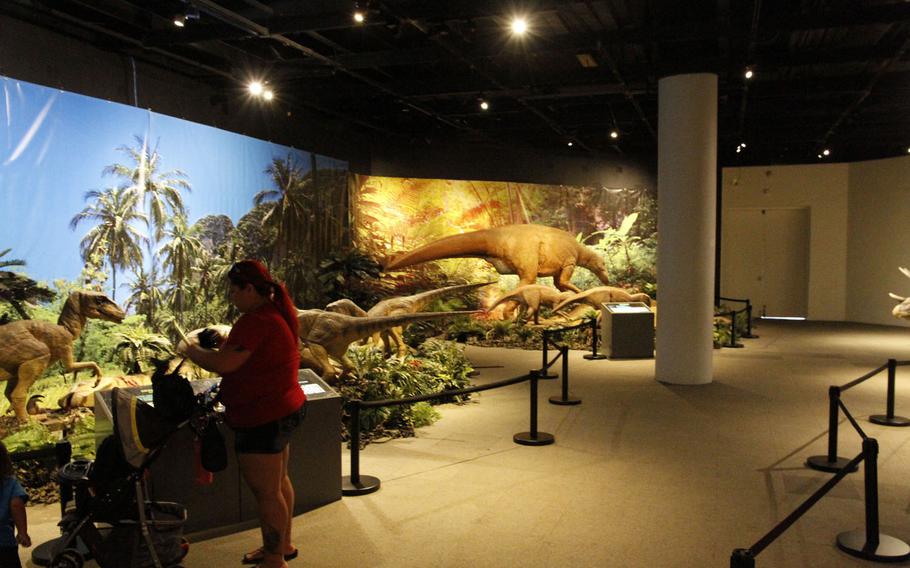 Buy Photo
The main exhibit hall at "Dinosaurs Unleashed" at the Bishop Museum in Honolulu. (Wyatt Olson/Stars and Stripes) 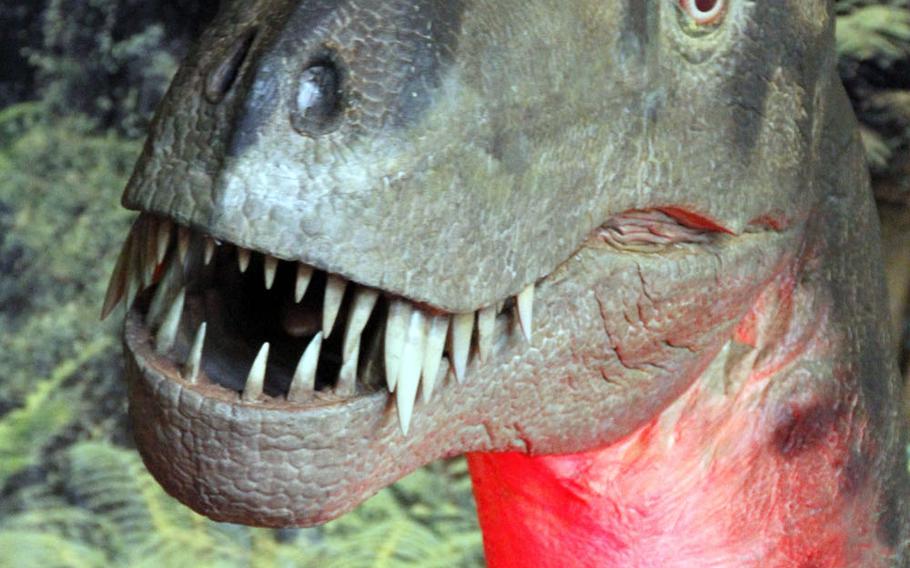 Buy Photo
The T-rex was the king of carnivores, with razor-sharp teeth curved like bananas. (Wyatt Olson/Stars and Stripes) 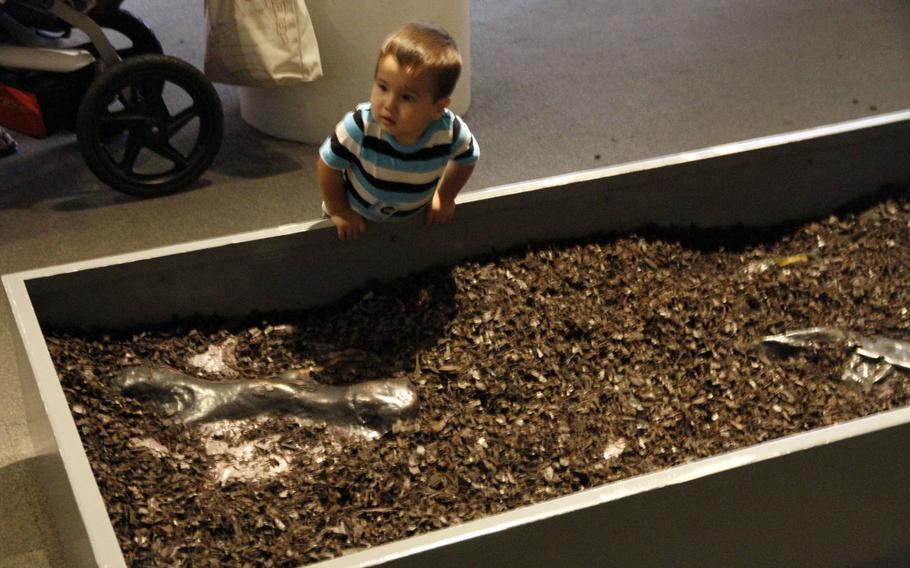 Buy Photo
Every paleontologist has to start somewhere: A boy explores the topsoil covering a mock fossil site at the exhibit "Dinosaurs Unleashed." (Wyatt Olson/Stars and Stripes) 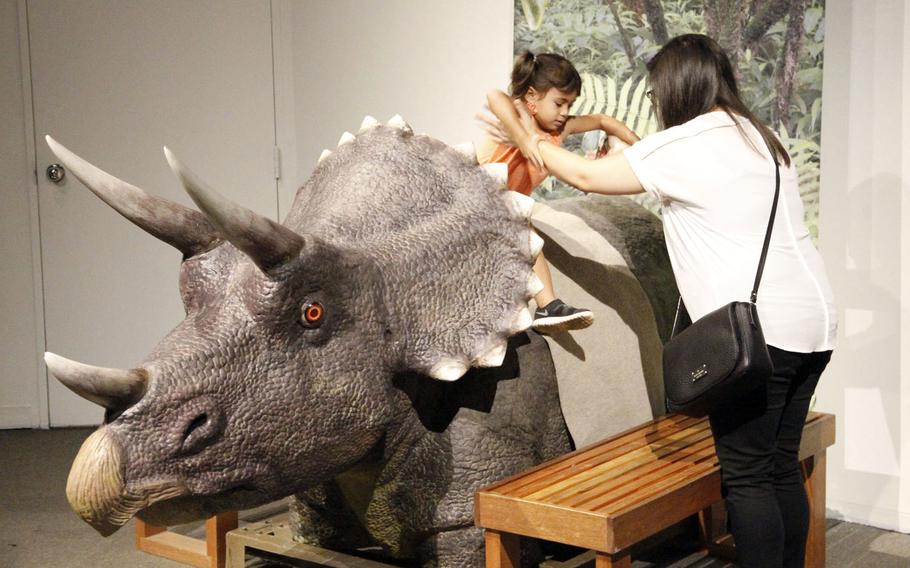 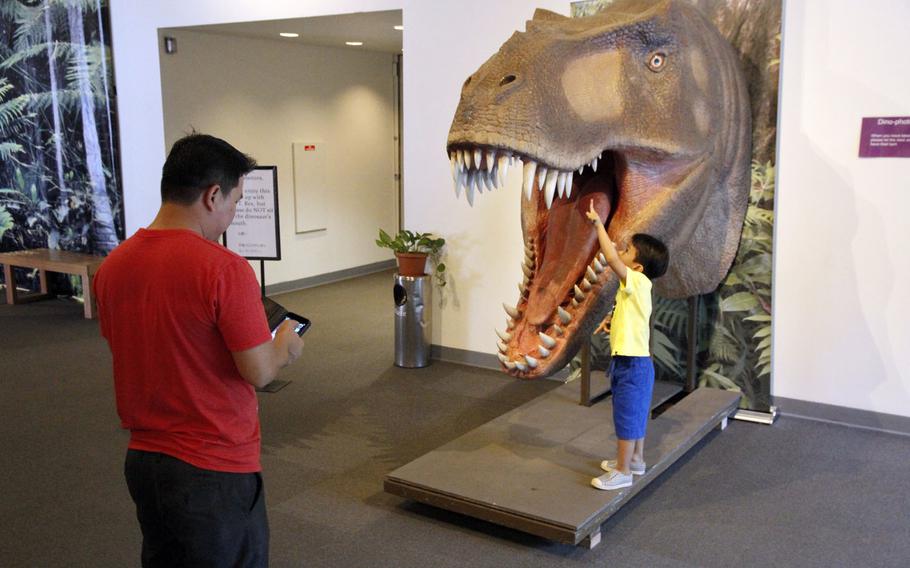 Buy Photo
My, what big teeth you have, T-rex! A child gets a close look at a model at the Bishop Museum's "Dinosaurs Unleashed" exhibit in Honolulu. (Wyatt Olson/Stars and Stripes) Buy Photo
Robo-dinosaur, where Jurassic meets joy-stick. Visitors can manipulate a robotic dinosaur at the exhibit. (Wyatt Olson/Stars and Stripes)

Dinosaurs and Hawaii are like eggs and bacon. They’re naturals together.

Steven Spielberg certainly recognized that when he tapped the islands as the major outdoor locations for “Jurassic Park” in 1993.

The setting had remained in his mind ever since filming the opening sequence of “Indiana Jones and the Raiders of the Lost Ark” in Hawaii, although he perhaps had some second thoughts when Hurricane Iniki laid waste to some “Jurassic Park” sets.

The regular and copious rainfall on the windward side of the islands has created a lush tropical environment that strikes moviegoers as something out of the Mesozoic Era.

And the dinosaurs kept on coming, with parts of the sequels “The Lost World” and “Jurassic Park III” shot here in 1997 and 2001.

Prehistoric creatures have now returned to Oahu in the exhibit “Dinosaurs Unleashed” at the Bishop Museum in Honolulu.

A half-dozen life-size animatronic dinosaurs are displayed in the flora of their primeval era. The screeches of the automatons fill the exhibit hall air — though the sounds dinosaurs made and many of their other features remain guesswork.

Greeting visitors is a looming Tyrannosaurus rex, as well it should since its Latin name means “lizard king.”

But this royal lizard shares as many attributes with birds as it does its cold-blooded relatives.

Roaming most of what is now North America in the late Cretaceous Period, its bird-like traits include large sinuses in the braincase, cavities into the sides of the vertebrae, a wishbone, hollow bones and bird-ish feet. Paleontologists think it’s possible T-rex hatchlings even had hair-like down feathers.

Tyrannosaurus rex is a kids’ favorite because of its fierce rows of teeth and menacing eyes. Visitors have the chance to meet a T-rex eye-to-eye nearby, where a life-size head is mounted near the floor for photographing.

“Please enjoy this photo-op with our T-rex, but please do not sit in the dinosaur’s mouth,” a sign says, a warning that seems unnecessary for many of the youngest patrons, who find the model’s bared teeth so unnerving that they’re unable to pose alone beside it.

There are other less-alarming interactive attractions for kids in the exhibit. Visitors can saddle up on the neck of a triceratops or move soil around to discover what’s below in a mock fossil bed.

Another display shows the mechanics behind the movements of a dinosaur. A robotic creature built of sheet metal and steel tubing can be manipulated by visitors with a control panel. Not to worry: Its feet are bolted to the floor.

But, of course, the automated dinosaurs are the stars.

Among them is the pachycephalosaurus, which loosely translates to “thick-headed lizard.” (And here you assumed all lizards were thick-headed.)

The top of its head was a 10-inch-thick dome of solid bone, and it is believed to have used that bowling-ball noggin for head-butting fights, a la modern mountain goat.

Unfortunately the bonehead on display isn’t engaged in active head butting, but the distant look in its eye suggests it’s taken on one challenger too many.

Perhaps the model with the most “lifelike” movements is the stegosaurus, with its row of upright plates on the spine used to ward off enemies. There’s much that remains unknown about those spikes because stegosaurus fossils can only reveal so much.

It’s possible those spiky plates were covered with tissue so that blood ran through them, perhaps operating as a kind of prehistoric air conditioning for the creature. In fact, paleontologists aren’t even certain how the plates were positioned on their backs.

With a brain about the size of a walnut, the stegosaurus wasn’t likely sitting at the head of the class in the Jurassic schoolhouse.

But his movements here are eerily real and seem to incorporate a motion detector that senses a visitor’s movement toward it.

Which suggests a great bit of dialogue for a future entry in the “Jurassic Park” franchise: “It may have a walnut brain, but it’s no thick-headed lizard.”