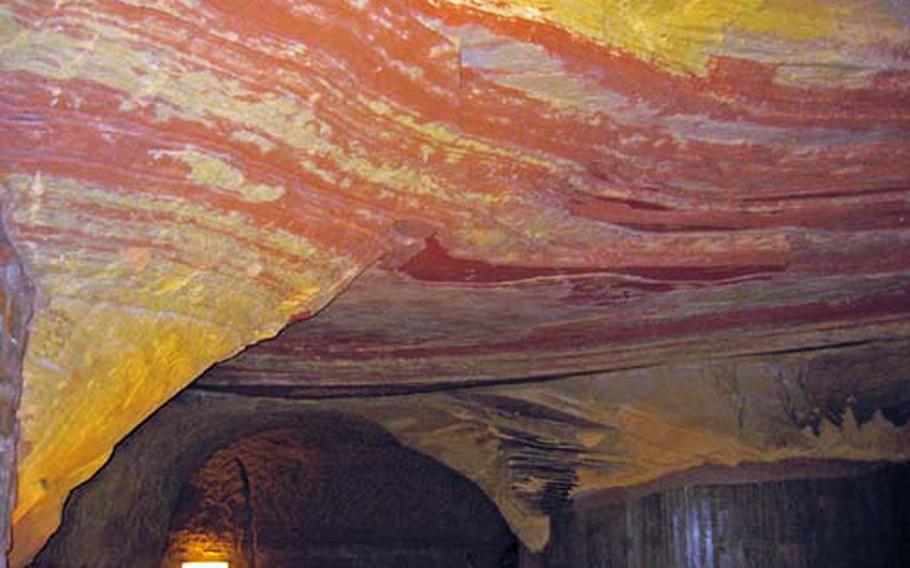 The Schlossberg Caves, whose creation dates as far back as the 11th century, are said to be Europe’s largest colored sandstone caves. Throughout their history, they have been used as defense, the storage of ammunition, lodging for troops, and an air-raid shelter during World War II. (Karen Bradbury / S&S)

The Schlossberg Caves, whose creation dates as far back as the 11th century, are said to be Europe’s largest colored sandstone caves. Throughout their history, they have been used as defense, the storage of ammunition, lodging for troops, and an air-raid shelter during World War II. (Karen Bradbury / S&S) 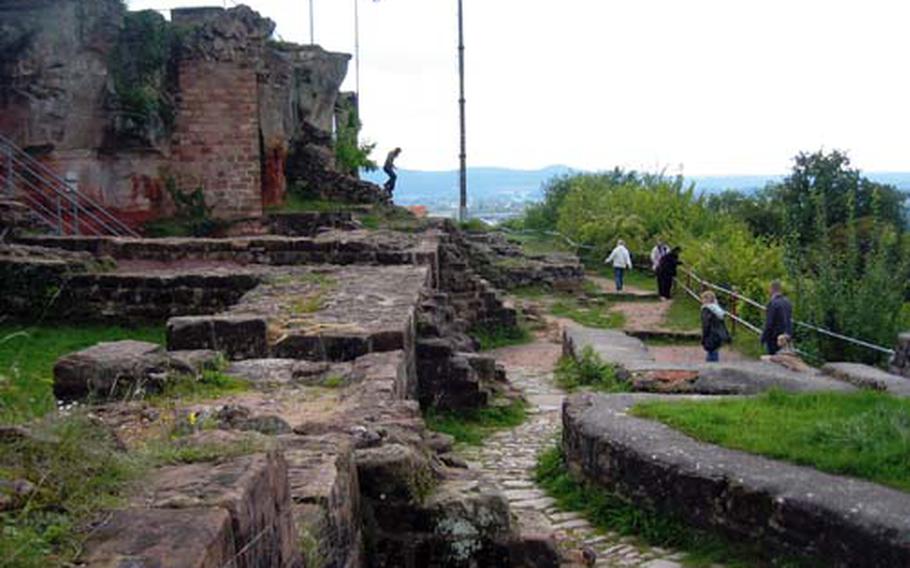 The ruins of the fortress provide a fantastic vantage point for views of the city of Homburg and beyond. The entrance to the Schlossberg Caves is a short distance away. (Karen Bradbury / S&S) 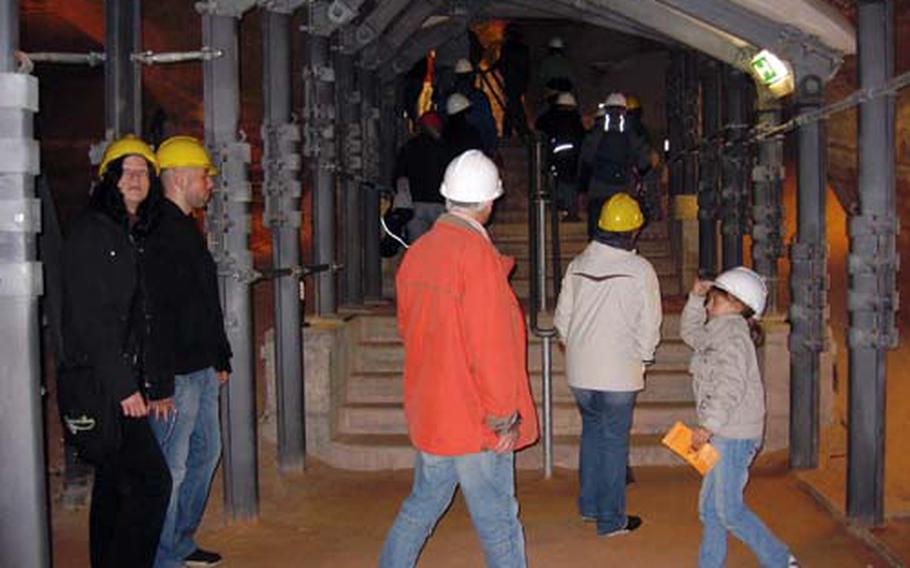 Hard hats and guided tours are mandatory during a visit to the Schlossberg Caves. (Karen Bradbury / S&S)

Sometimes the most memorable part of a trip isn&rsquo;t so much what you see as what you learn.

A trip to Homburg, in Germany&rsquo;s Saarland region, taught me some surprising things about post-World War II German history.

Homburg offers a fairly standard range of sites within its pedestrian district to go along with St. Michael&rsquo;s church, which has a commanding perch above the city. But the best of the town is found still higher up.

A brisk walk of some 20 minutes from the church takes you to a plateau that was the site of a mighty fortress in the 12th century. You&rsquo;ll have to use your imagination to conjure up what the place was like when nobles and their servants lived there, for the fortress is in ruins. From the lookout point, there are commanding views in every direction.

From the fortress grounds, a short downward trek leads to the entrance of the Schlossberg Caves. Pay the modest admission fee, don a provided hard hat and you&rsquo;re ready to walk through several caverns of varying dimensions.

The portion of the caves open to visitors is only the topmost three levels of excavations that extend downward to a total depth of some 12 floors, with more than three miles of passageways on the dozen levels. No natural phenomenon, these caverns are the result of human activity, having provided an escape route from the castle that once towered above, and later as quarries for the fine grit valued for cleaning and the production of glass.

The largest is the Schlossbergh&ouml;hle, "or castle rock cave." Even the mildly claustrophobic shouldn&rsquo;t have an issue with these spaces &mdash; the ceilings aren&rsquo;t low enough to be oppressive, and the spaces are well-lit.

The red-brown-beige palette of colors in a striated pattern on the sandstone walls might remind you of sand sculptures found in terrariums or in decorative glass jars wrapped in macram&eacute; from the &rsquo;70s.

The most interesting part of the cave, from a historical perspective, is toward the rear of the section of the cave open to visitors. A guide told me that I was viewing a bunker that had been set up in the 1950s to serve as the potential seat of government of the autonomous Saarland Territory.

As I learned, the area that today makes up the German state of Saarland, blessed with abundant coal and iron ore, had been batted about between Germany and France for centuries. A 1935 vote to determine its final status saw the public vote overwhelmingly to be part of Germany, and in 1940, Adolf Hitler incorporated Saarland and Lorraine, which was annexed from France, into the province of Westmark.

At the close of the war, the Saar Protectorate was placed under French military occupation and an autonomous government was installed. The Saar Treaty of 1956 declared that Saarland should be allowed to join the Federal Republic of Germany, which it did on Jan. 1, 1957, making it the only state to join the Bundesrepublik between its formation in 1949 and German unification in 1990.

Before joining the FRG, Saarland had its own postage stamps, license plates, currency and even a team that took part in the 1952 Olympics.

True, I could learn all this from reading a book, but seeing where it took place makes the history lesson come alive.

The caves are open 9 a.m. to 5 p.m. daily April through October, and 10 a.m. to 4 p.m. in November, February and March. They are closed to visitors in December and January. Although tours are normally mandatory, I arrived near closing time and was allowed to wander on my own.

Tickets are 5 euros for adults and 3 euros for children younger than 16. A family ticket for two adults and one child is 11 euros; each additional child admission costs 2.50 euros.

There are plenty of restaurants within Homburg&rsquo;s pedestrian district. If the weather cooperates, the castle ruins would make a nice site for a picnic.

For more details, call 06841-2064 or see www.homburg.de, which has a section on the cave (Web site is in German). For information in English, see www.showcaves.com/english/de/misc/Homburg.html.