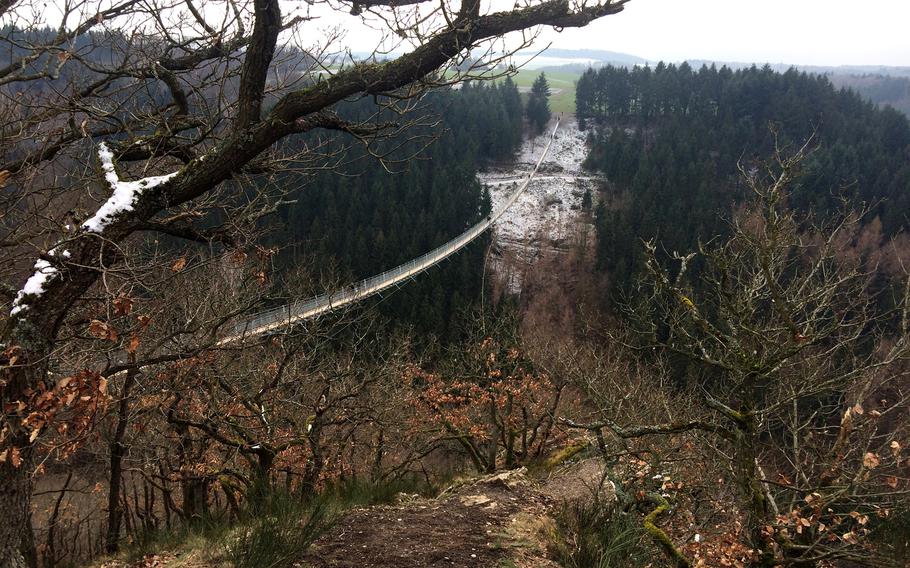 After a mile-long walk, hikers get their first glimpse of the suspension bridge near Moersdorf, Germany. The quarter-mile-long bridge was opened to the public in October 2015. (Sam Amrhein/Stars and Stripes)

After a mile-long walk, hikers get their first glimpse of the suspension bridge near Moersdorf, Germany. The quarter-mile-long bridge was opened to the public in October 2015. (Sam Amrhein/Stars and Stripes) 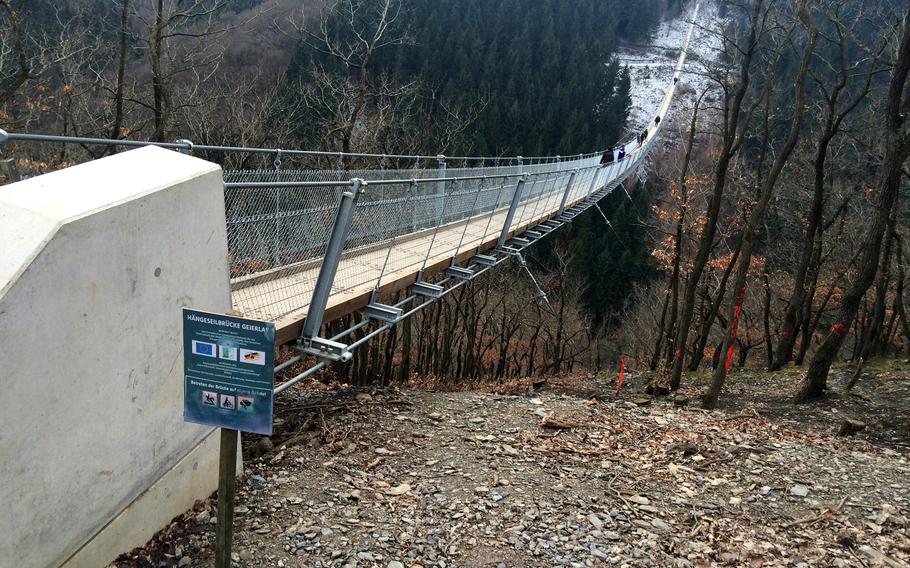 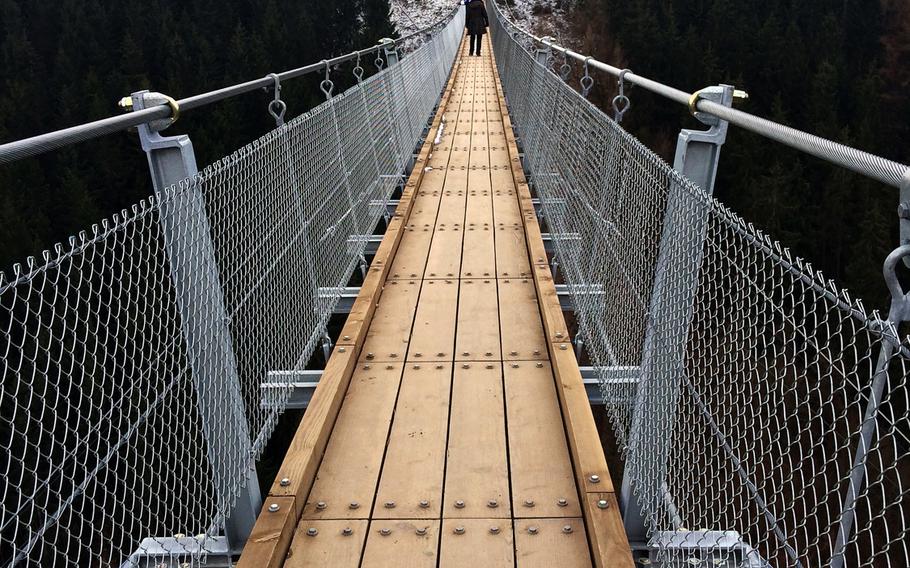 The walkway on the suspension bridge near Moersdorf is about 33 inches wide, which is just enough for people to pass each other without feeling uncomfortable. (Sam Amrhein/Stars and Stripes) 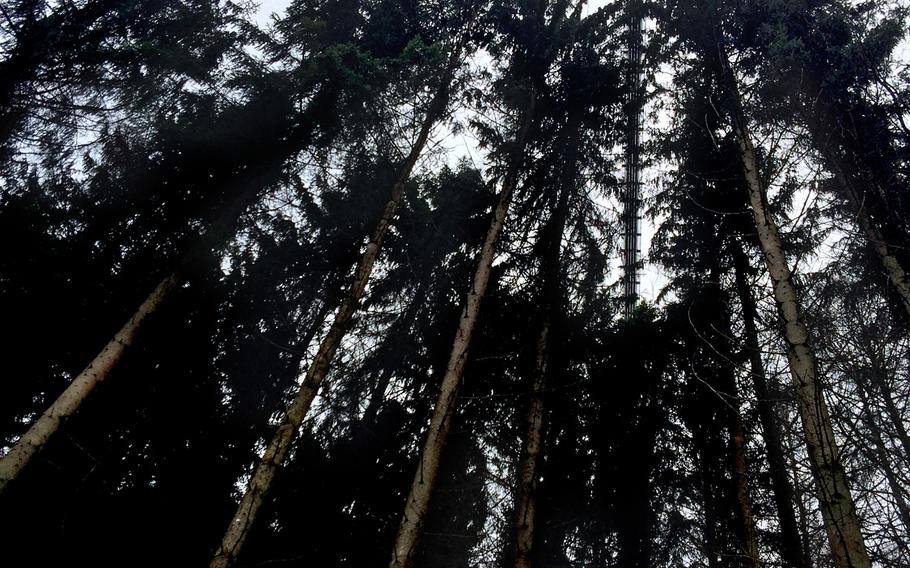 Hikers who choose the longer route back to Moersdorf will travel right under the Geierlay, the longest walking suspension bridge in Germany. (Sam Amrhein/Stars and Stripes) 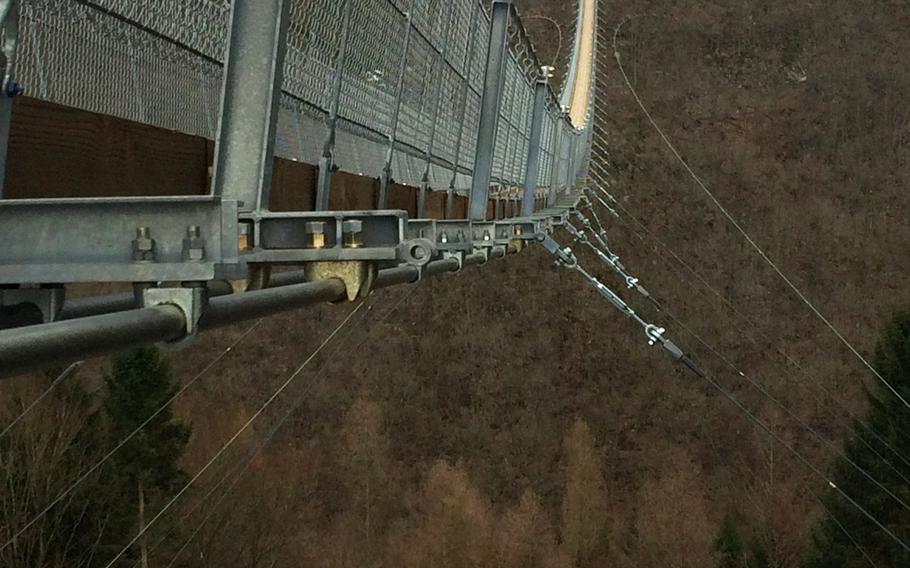 Thanks to dozens of suspension cables, the bridge can hold up to 600 people and withstand winds of more than 130 mph. (Sam Amrhein/Stars and Stripes) 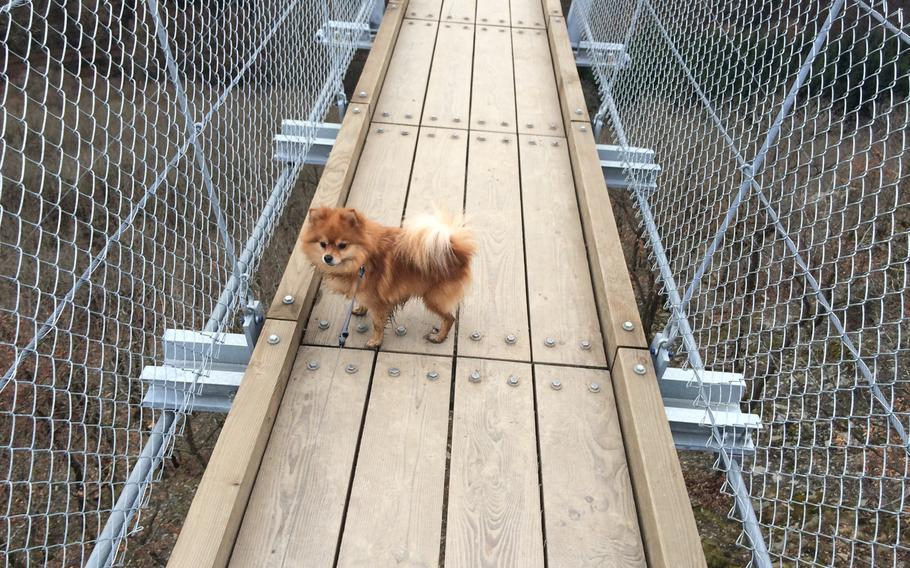 As long as they are on a leash, it's OK for dogs to walk across the suspension bridge near Moersdorf, Germany. Bikers, however, must walk their bikes across. (Sam Amrhein/Stars and Stripes) 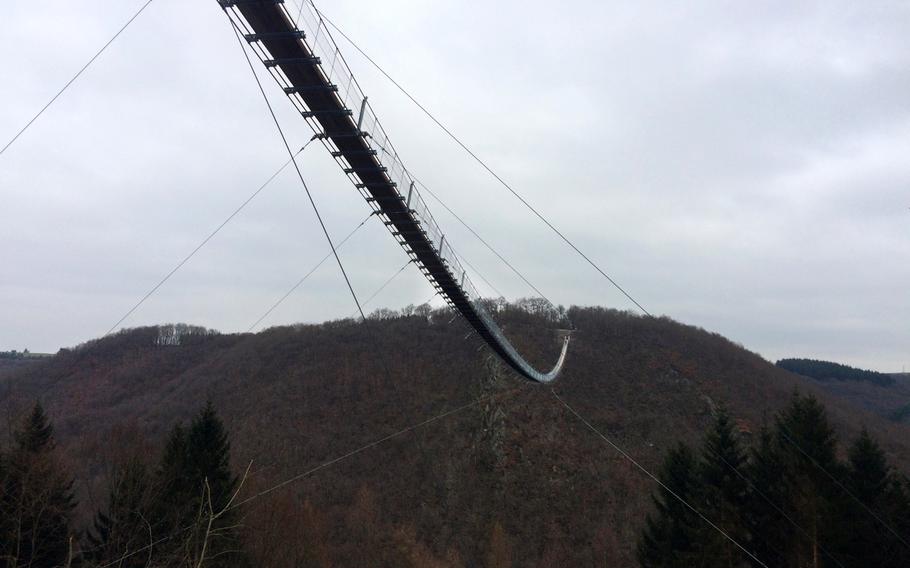 The quarter-mile-long suspension bridge near Moersdorf sits 300 feet above the forested valley of a Mosel River tributary. (Sam Amrhein/Stars and Stripes) 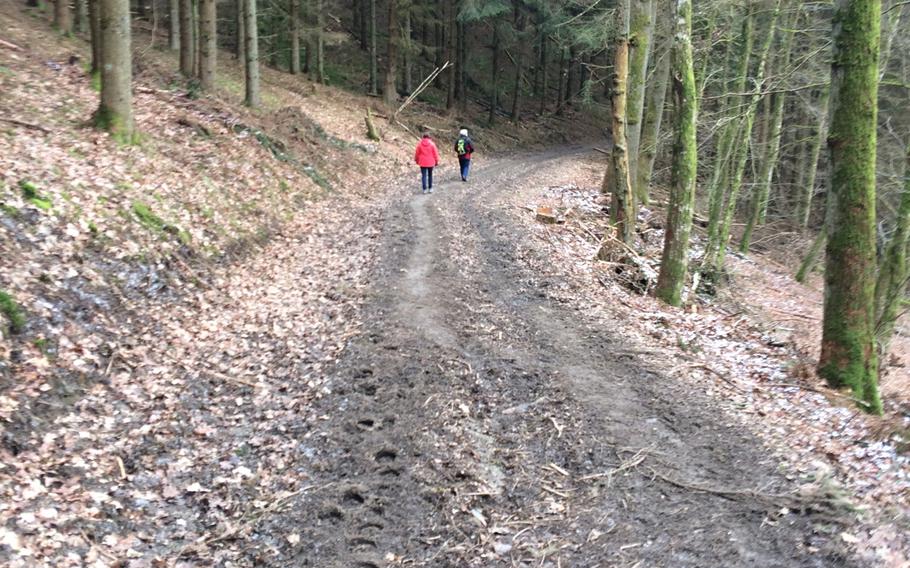 Stage 19 of the Saar-Hunsrueck Steig, a 250-mile network of hiking trails in western Germany, runs under the Geierlay suspension bridge near Moersdorf. (Sam Amrhein/Stars and Stripes)

The little sway you feel when you first step onto Germany’s longest suspension bridge can be a bit unnerving.

Thoughts of what it’s going to be like when you’re in the middle of the bridge — more than 300 feet above the valley — quickly fill your mind.

In hopes of attracting more tourists to their little village about 40 miles south of Koblenz, Moersdorf officials dreamed up the idea of building the 1,200-foot Geierlay bridge, which spans the forested valley containing a tributary to the Mosel River. Construction began in March 2015, and the breathtaking bridge was open to the public in October.

Thick steel cables provide the main support for the bridge, with dozens of additional cables underneath providing enough support to withstand 130 mph winds, according to the attraction’s website, geierlay.de. Those cables also help keep that nerve-testing swaying to a minimum. Sturdy wooden slats serve as the walkway.

A quick stop in the middle to look over the edge at the forest below is a must, unless you’re afraid of heights. But don’t worry — the bridge isn’t going to tip over with you on it.

Officials say it can hold up to 600 people at a time, but there were only a handful of visitors on a recent weekday. The website’s webcam says only 102 people crossed the bridge on that particular day. More than 127,000 people have visited since it opened less than five months ago.

The quickest route to the bridge from the parking lot at the visitors center in town is a leisurely 1-mile stroll through some farm fields.

Once you cross the bridge, you have two options: Go back across or take one of the hiking trails down through the valley. The clearly marked paths below are part of the Saar-Hunrueck Steig, a 250-mile network of hiking trails in western Germany.

The path to the bottom of the valley is easy — although it was rather muddy on this particular day.

The hike up the valley is a different story.

From the moment you cross the small creek at the valley’s bottom, you begin to climb. Sometimes, the path is more than 5 feet wide. At other times, it’s less than a foot.

The overall climb out of the valley — about 400 feet in elevation — was on the moderate side. It was steep in some spots, not so much in others. It’s likely you’ll have to stop and catch your breath in a few places.

Our hike ended up being slightly more than 5 miles, taking us just under two hours, which included plenty of time for picture-taking.

• From Wiesbaden: Take the A643 toward Bingen. Continue to the A61 north until exit 43-Pfalzfeld. Follow the B327 toward Kastellaun. Watch for signs to Moersdorf. The parking and visitors center are on the right as you enter the town.

• From Kaiserslautern: Take the A6 to the A63 toward Frankfurt. Pick up the A61 north toward Cologne and take exit 43-Pfalzfeld. Follow the B327 toward Kastellaun. Watch for signs to Moersdorf. The parking and visitors center are on the right as you enter the town.

The bridge is open at all hours, although it would be a tough hike in the middle of the night. Dogs and bikes are welcome but must be walked across the bridge.

Entrance to the bridge is free. Parking at the visitors center is 2 euros per day.

If you go on a weekday, it might be best to pack a lunch. The bridge’s website says there are three restaurants in Moersdorf where you can grab a good meal, but none were open when we were there.