Hidden below modern Vicenza is a long-abandoned Roman mansion 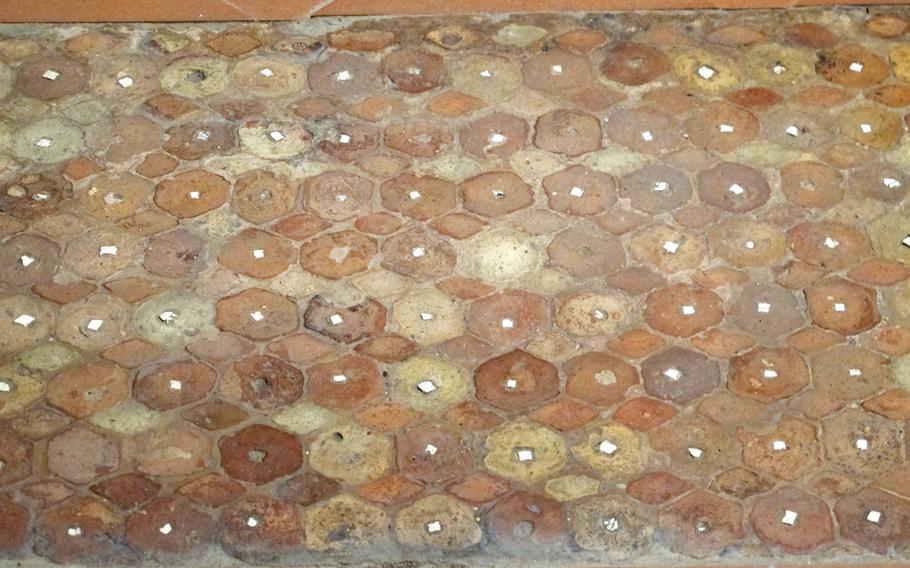 One of the small rooms in Vicenza's Criptoportico Romano contains a fragment of a decorative flooring made of cooked clay, basically, brick. The white spots in the hexagons are marble. (Nancy Montgomery/Stars and Stripes)

One of the small rooms in Vicenza's Criptoportico Romano contains a fragment of a decorative flooring made of cooked clay, basically, brick. The white spots in the hexagons are marble. (Nancy Montgomery/Stars and Stripes) 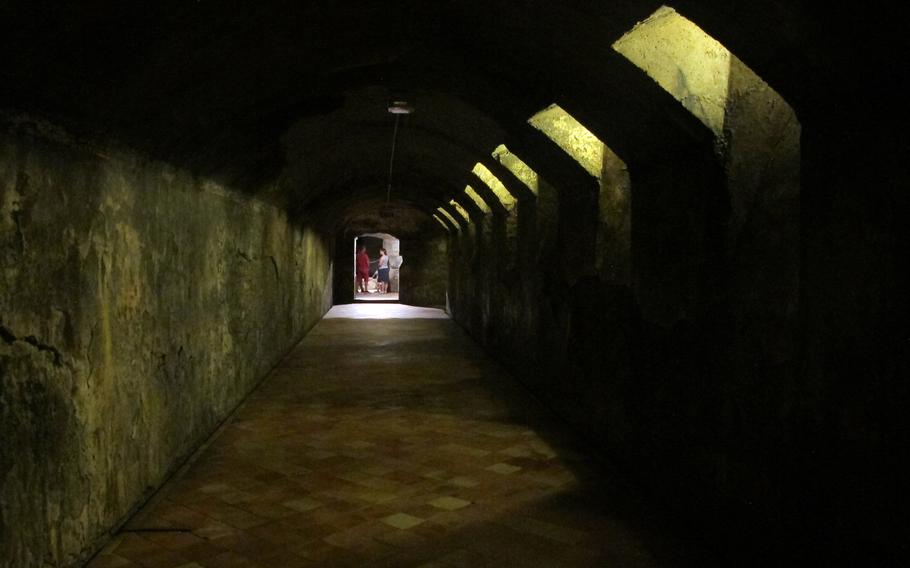 Vicenza's Criptoportico Romano brings visitors 20 feet down from the street into the "hidden porch" of a 1st Century B.C. mansion. (Nancy Montgomery/Stars and Stripes) 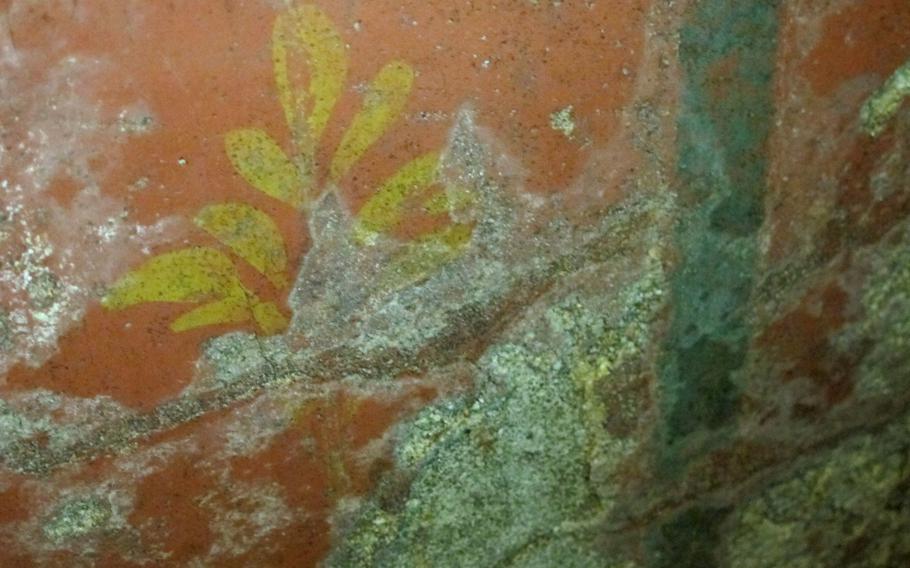 A guide's flashlight during a tour of the Criptoportico Romano in Vicenza lit up the remaining decorative mosaics that was once to be seen on all the walls of the 1st century B.C. structure. Artisans, many of them slaves, used plants and minerals to make the paint. (Nancy Montgomery/Stars and Stripes) 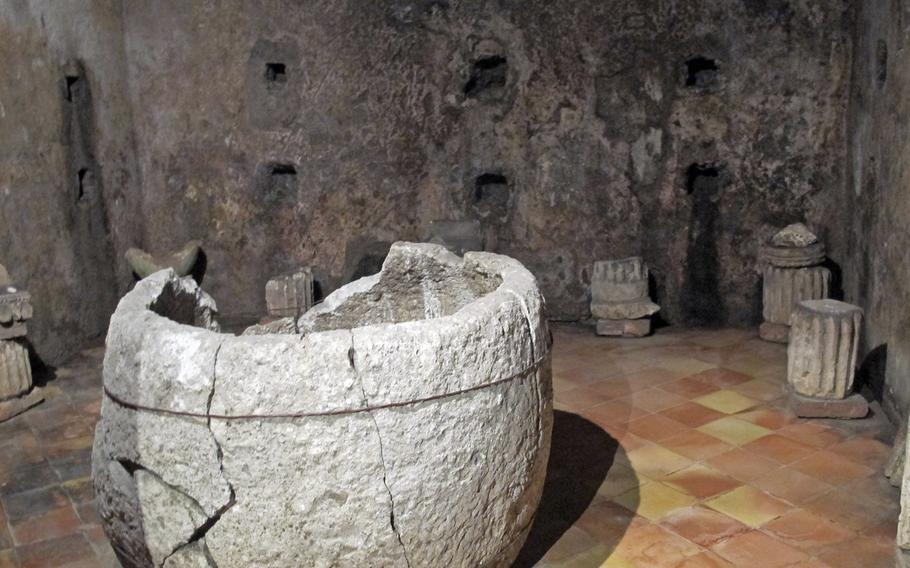 One of three small rooms in Vicenza's Criptoportico Romano thought to be a sort of pantry contains a large stone bowl whose purpose remains a mystery. (Nancy Montgomery/Stars and Stripes)

In Missouri, there’s a museum dedicated to hair. An Icelandic museum showcases mammal penises. And a Stoogeum in Pennsylvania explicates the cultural significance of Larry, Curly, Moe and sometimes Shemp. Vicenza has the Roman Criptoportico. Although a serious archaeological space operated by the regional government, it’s also a little quirky. Tucked away behind a grassy circle beloved by dogs across from the city’s cathedral, the unassuming little museum takes visitors down to the basement of what was once a local mansion. In Italy, of course, “once” can mean a very long time ago. Here, it means the end of the 1st century B.C., when Julius Caesar, Mark Antony and Cleopatra played the game of thrones and almost everyone else was a peasant, soldier or slave. It was just as the Romans brought their road system, aqueducts, forums, temples and public baths to Vicenza, and just before the Roman republic became an empire. The mansion, or “domus,” is long gone, abandoned around the fourth century A.D. — just as Constantine the Great became the first Roman emperor to convert to Christianity — and was scavenged for building materials. In 1954, as workers were digging to construct a rectory, the Criptoportico was discovered 20 feet underground. The word is literally translated as “hidden porch,” according to my English-speaking guide, who seemed as if he might quiz me at the end. It was used variously as a climate-controlled promenade, work area, pantry and hangout spot. It was beautiful then. Ten feet underneath the house and gardens, windows let in the light to shine on highly decorative walls painted with laurels and flowers and sparkling from applied white marble crystals. No matter the weather, down in the porch, it was always about 64 degrees. All that takes some imagining now. The structure, down a bleak, narrow hallway and set of steps, consists of two tall, broad hallways with arched roofs connected by a third, with three small rooms off to the side. It is dark, with bare lightbulbs for illumination. It is damp, with visible water beads on the ceiling. It is very chilly, even on the hottest summer day. Thousands of years on, the walls are blackened and rough. But they still stand.montgomery.nancy@stripes.comDIRECTIONS Piazza del Duomo, 6, 36100 Vicenza VI, ItalyTIMES 3 p.m. to 5 p.m. Saturdays; 10 a.m. to noon Sundays. Closed weekdays.COSTS FreeFOOD Snacks, sandwiches, aperitifs and Sunday lunch are available seconds away at scores of bars, cafes and restaurants. INFORMATION Phone (+39) 347-942-6020 Email: athena_el@yahoo.it