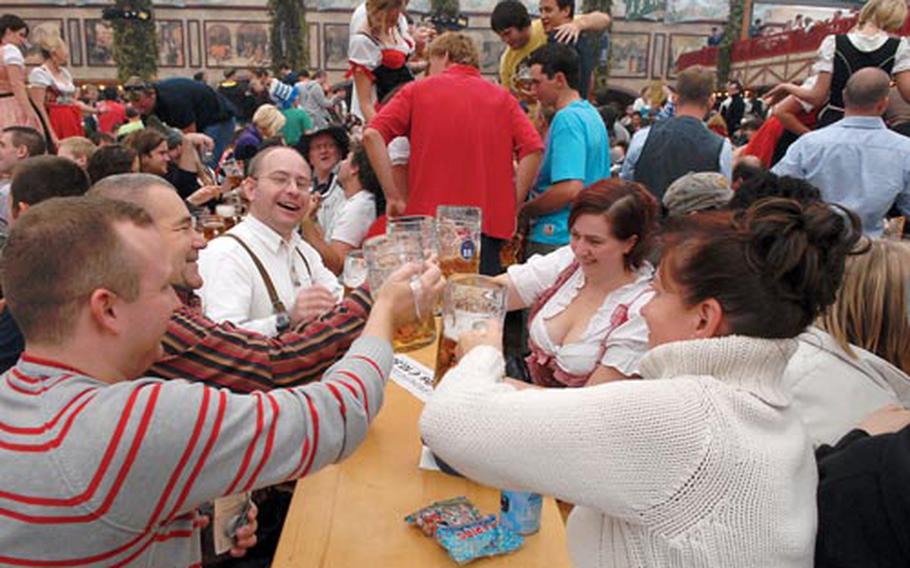 Celebrants toast one another in the Hofbrauhaus-Festhalle at last year’s Oktoberfest in Munich. This year the festivities run from Sept. 19 to Oct. 4. (Michael Abrams / S&S)

Celebrants toast one another in the Hofbrauhaus-Festhalle at last year’s Oktoberfest in Munich. This year the festivities run from Sept. 19 to Oct. 4. (Michael Abrams / S&S) 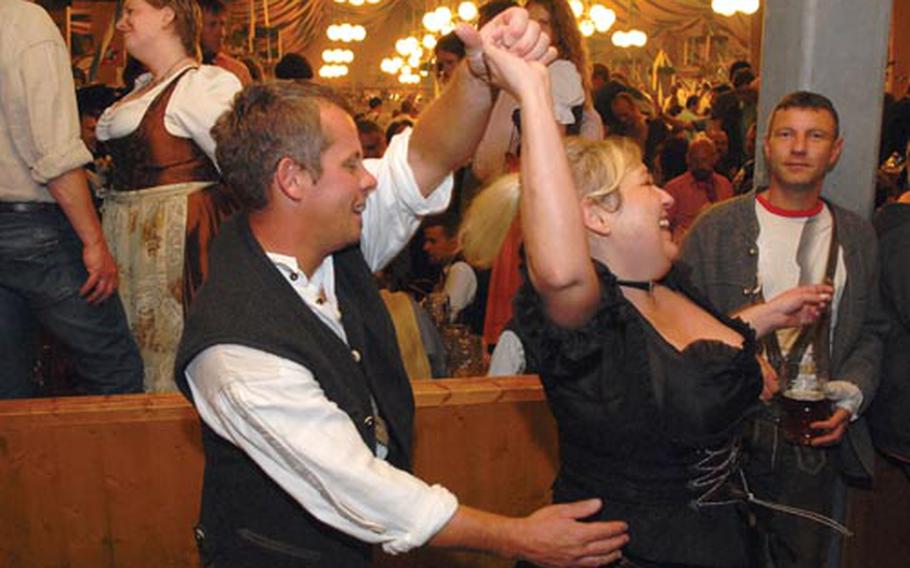 A couple enjoys a dance in a beer tent at last year’s fest. (Michael Abrams / S&S) 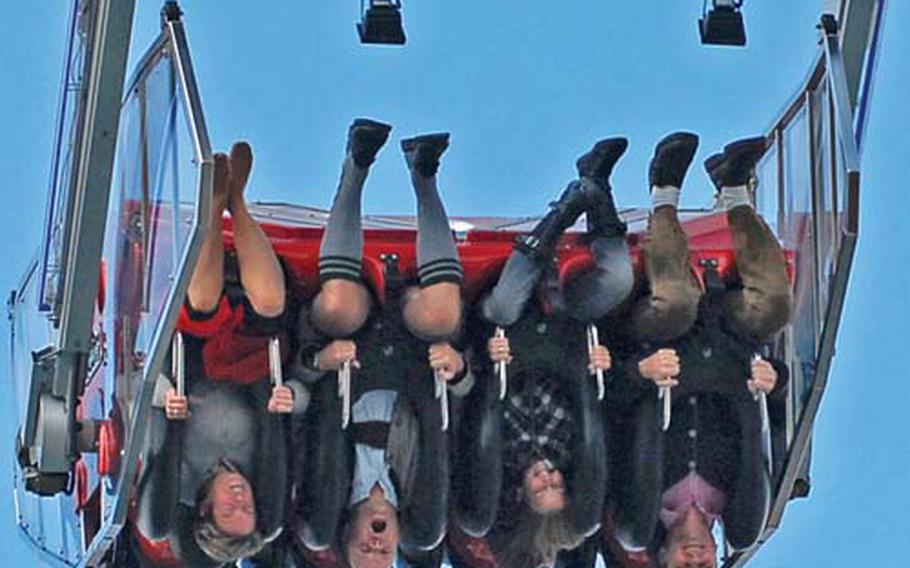 The fun is not just about beer at the festival. There are plenty of thrilling rides, such as the Cyberspace, seen here. (Michael Abrams / S&S) 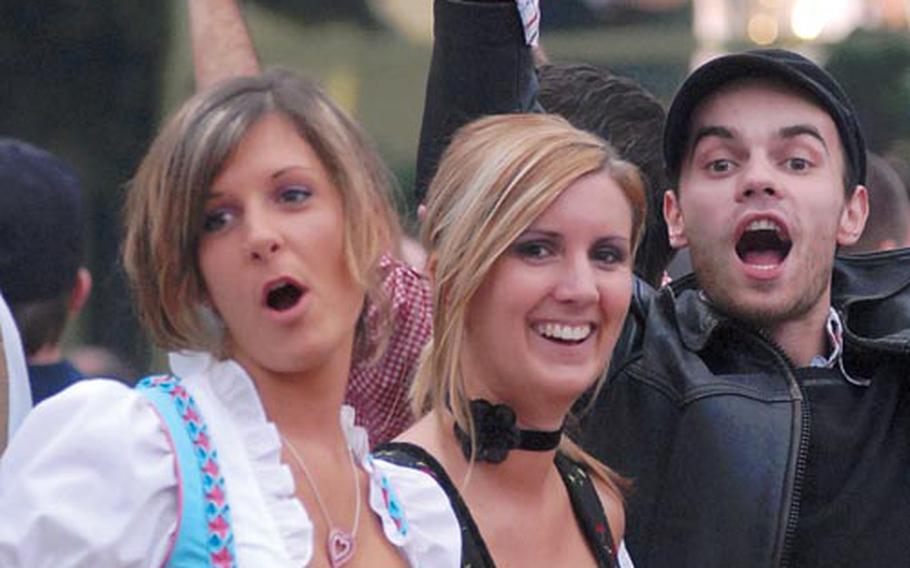 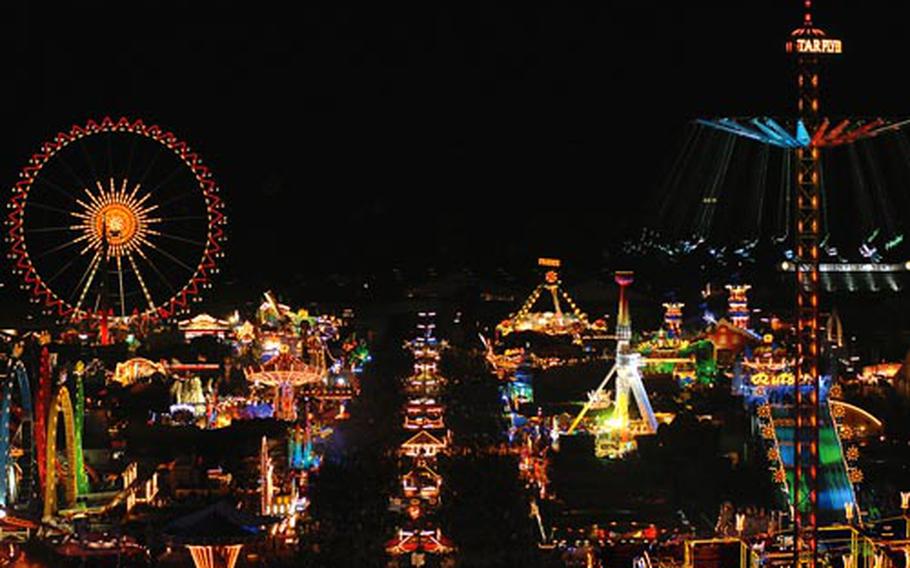 Related Story:Tradition on ParadeIt may be the world&#8217;s biggest beer bash, but it began as a wedding party for a prince and his princess.

The year was 1810 and the place was Munich, the capital of Bavaria. Crown Prince Ludwig was marrying Princess Therese von Sachsen-Hildburgshausen, and the public was invited to celebrate on a big field outside the gates of the city.

In honor of the bride, the field was named theTheresienwiese, and the royal pair and their subjects must have had a great time, because this year when Lord Mayor Christian Ude taps the first keg on Sept. 19, the 176th edition of Oktoberfest will begin.

From then until Sunday, Oct. 4, the Theresien-wiese, now downtown in modern-day Munich, will be a mecca for beer drinkers and party-goers from all over the world.

While for many it&#8217;s a place to drink and party, the Oktoberfest is steeped in tradition. It has been canceled only 24 times in the past 199 years, and only because of war and two outbreaks of cholera.

For the citizens of Munich, it is as much a reason to dress up in their finest dirndl and lederhosen outfits and stroll across the fairgrounds as it is to drink beer.

The festival begins with the same traditions every year.

At 11 a.m. the grand entry parade of the Oktoberfest landlords and breweries begins. It is led by a symbol of the city, the M&#252;nchner Kindl, or Munich Child, on horseback, and includes the beer tent landlords and their families, along with the horse-drawn drays of the Munich breweries. It ends on the Oktoberfest grounds for the tapping of the first keg at noon.

Inside the football-field-size beer tents, some of which hold as many as 10,000 people, brass bands oompah their way through drinking songs. Friends and strangers, locals and foreigners toast one another with big one-liter beer mugs. They sing along and dance on the benches as servers, with fists full of mugs and trays full of food, jockey their way through the madness.

Everything about the Oktoberfest is gigantic. Besides the more than 6 million liters of beer that will be guzzled, about 400,000 chickens, 50,000 pig knuckles, 235,000 pairs of pork sausages and 90 oxen will be consumed by the crowd.

The Wiesn, as the locals call it, is not just about beer and food. It&#8217;s also about roller coasters, merry-go-rounds, Ferris wheels, slides, swings, shooting galleries and mazes. It is fun for the whole family. (Both Oktoberfest Tuesdays, Sept. 22 and 29, are family days, with reduced prices on the rides.)

If you want Oktoberfest to be more than a soggy beer bash, don&#8217;t miss the traditional Costume and Riflemen&#8217;s Parade on Sept. 20. And for those who like brass bands, there is an open-air concert with all the Oktoberfest bands at the foot of the giant Bavaria statue on Sunday, Sept. 27, at 11 a.m. (If it rains, it will be postponed until the following Sunday.)

So, whether you go for the beer-slugging sing-along or for the history and the tradition &#8212; or for a little of both &#8212; Oktoberfest is something to experience at least once in a lifetime.

&#8226; When the beer tents are full to overflowing, not-so-nice bouncers keep people from entering. You usually can find a seat in the beer gardens that surround the big tents.

&#8226; If you plan to hook up with friends at the fest or need a rendezvous point if you lose one another, the best place to meet is at the lion-topped tower at the L&#246;wenbr&#228;u tent. The tower is actually a silo of beer.

&#8226; Hotels are pretty booked up during Oktoberfest, but it usually is possible to find something. Go to the Munich city Web site at www.munich.de for accommodations or surf the Web. We have had luck at www.bookings.com.

&#8226; When in Munich, the subway is the best way to get to the festival grounds, but it will be crowded. Lines U3, U4, U5 and U6 all stop near the Theresienwiese, which is also in walking distance from Munich&#8217;s main train station, where trains from all over Europe arrive. You also can take S-bahn lines S1 or S8 or streetcar lines 18 or 19

&#8226; Check with the local USO, Outdoor Recreation or on-base travel office for bus trips to the Wiesn. Ramstein RTT Travel has tickets for the Oktoberfest party train on Oct. 3. Information on many of the trips is included in the Tours listing of the Travel section.

&#8226; For more information about Oktoberfest and accommodations in Munich, see the Web site www.oktoberfest.de/en.