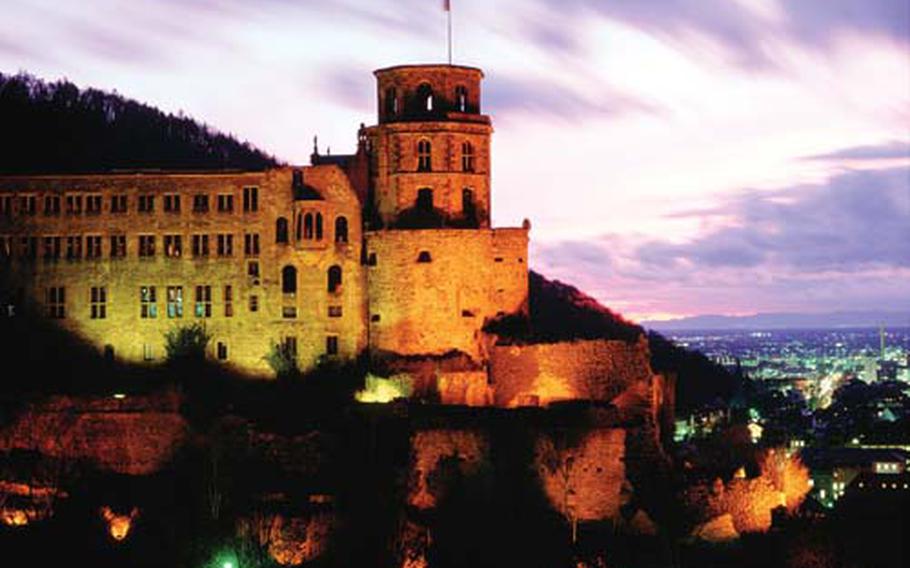 The east side of Heidelberg Castle with the view over the city always looks spectacular when illuminated soon after sunset. (Andrew Cowin/Special to Stars and Stripes)

Three times a year, the illumination of Heidelberg castle by a spectacular fireworks display draws tens of thousands of visitors to the picturesque city.

They are eager to see the colorful show that has thrilled, among others, one-time resident Mark Twain, who wrote about the event in his 1878 book, &ldquo;A Tramp Abroad.&rdquo;

&ldquo;..."several vast sheaves of varicolored rockets were vomited skyward out of the black throats of the castle towers, accompanied by a thundering crash of sound, and instantly every detail of the prodigious ruin stood revealed against the mountain-side and glowing with an almost intolerable splendor of fire and color. For some little time the whole building was a blinding crimson mass, the towers continued to spout thick columns of rockets aloft, and overhead the sky was radiant with arrowy bolts which clove their way to the zenith, paused, curved gracefully downward, then burst into brilliant fountain sprays of richly colored sparks.&rdquo;

But the illuminations are not just sound and light. They are part of the castle&rsquo;s history, marking two events that began nearly 400 years ago to honor another visitor to the city.

The year was 1613, and the visitor was Elizabeth Stuart, daughter of James I, king of England, Scotland and Ireland. Her new spouse, the Elector Palatine, Friedrich V, was eager to have their long and fatiguing journey end with a bang. Thus, two days after the newlyweds had established themselves in the castle, a two-hour fireworks show provided a suitably splendid culmination to months of celebrations.

Among the many highlights of those festivities had been the performance of a relatively new play, &ldquo;The Tempest,&rdquo; with its author, William Shakespeare, as one of the actors. Frederick and Elizabeth were devoted theater fans, even adding an upper story to one of the castle&rsquo;s towers to serve as a theater. It is likely that this was the venue of the first performances of works by Shakespeare in Germany.

The bard of Avon was not the only distinguished writer eager to win the favor of the bridal couple. John Donne (who preached in Heidelberg&rsquo;s Church of the Holy Spirit in 1619) also commemorated them with &ldquo;An Epithalamion, or Marriage Song, on the Lady Elizabeth and Count Palatine being married on St. Valentines Day&rdquo; &mdash; a remarkable and somewhat racy poem.

What had been intended as a political marriage to strengthen the Protestant League did indeed become a genuine romance. This is perhaps best made evident by the attractive Elizabeth Gate in the Castle Garden, which was erected overnight in 1615 as a

surprise gift for Elizabeth&rsquo;s 19th birthday. A total of 13 children might be seen as further evidence.

The romance, however, was to end in tragedy. Frederick&rsquo;s unwise acceptance of the throne of Bohemia in 1619 meant inevitable war with the Catholic emperor, Ferdinand II. Thirteen months after their coronation in Prague, Elizabeth and Frederick were driven out and were never to return to Heidelberg.

Soon after, Heidelberg and its castle were captured by Catholic forces, which ravaged Frederick&rsquo;s wonderful garden (called the "Eighth Wonder of the World") and carted off the city&rsquo;s legendary library, the Bibliotheca Palatina, to Rome as a gift for the pope.

Another army finished the job. As part of a general policy of eradicating potential trouble spots on his eastern borders, Louis XIV, France&rsquo;s "Sun King," ordered the complete destruction of the city in 1693.

It is in memory of this event that the castle illuminations are held today. The fireworks begin with the castle being lit up by flickering Bengal fire, as Twain noted, "to recall the aspect which the castle must have borne in the old time when French spoilers saw the monster bonfire which they had made there fading and smouldering toward extinction."

But the illuminations are not about destruction. They are a chance to see the castle lit up at night &mdash; a view and atmosphere that are simply irresistible. As Twain pointed out, "One thinks of Heidelberg by day &mdash; with its surroundings &mdash; as the last possibility of the beautiful: but when he sees Heidelberg by night, a fallen Milky Way, with that glittering railway constellation pinned to the border, he requires time to consider upon the verdict."

Andrew Cowin is a writer and photographer in Heidelberg, Germany, who has published a book on the city. It is available through agcowin@web.de.

&bull; This year&rsquo;s remaining Castle Illuminations are July 11 and Sept. 5, each beginning about an hour after sunset. See www.heidelberg-marketing.de for details.

&bull; Best viewing spots are on the north bank of the Neckar River starting about 100 yards downstream of the Old Bridge, or from the so-called Philosopher&rsquo;s Walk, on a hillside opposite the castle reached via a steep path (Schlangenweg) starting just opposite the Old Bridge.

To get closer to proceedings, cruise-and-dinner deals are available on boats of the local "white flotilla": www.rnf-schifffahrt.de. &bull; To get visitors in the mood, a concert including Handel&rsquo;s "Music for the Royal Fireworks" is held before each castle illumination at 6:15 p.m. in the Church of the Holy Spirit.

&bull; In the castle itself, the courtyard restaurant also promises gastronomic pyrotechnics to accompany proceedings, seewww.moevenpick.de/heidelberg.