Heidelberg: A looker with plenty of cultural offerings 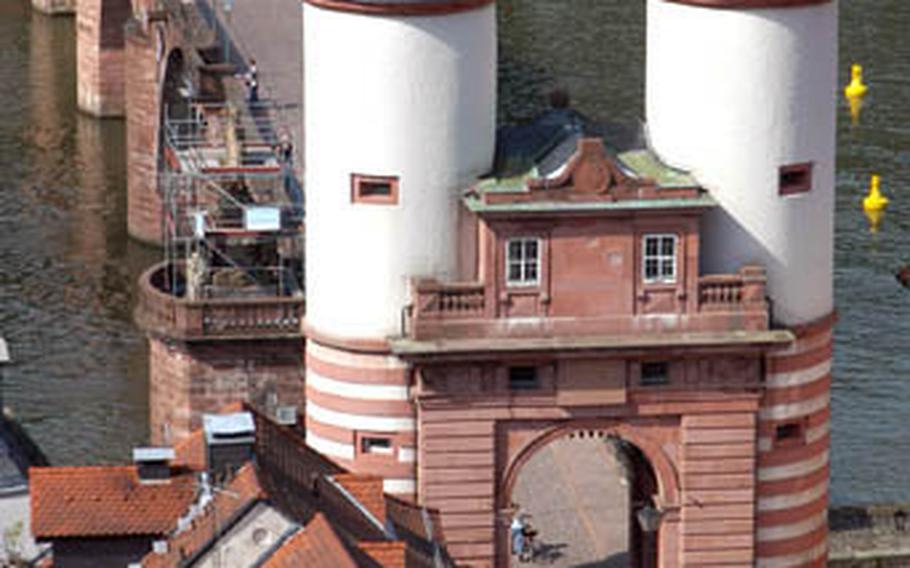 A view of Heidelberg&#39;s Old Bridge with its twin-towered gate, as seen from the tower of the Heiliggeistkirche. ()

Along with Munich and Neuschwanstein Castle, Heidelberg is usually a must on tourist itineraries for Germany.

Why Heidelberg? Maybe because it has something for everyone. Bit of a clich&eacute;? Perhaps, but for this old city on the Neckar River, it is pretty close to the truth.

For the tourist, there is the Heidelberg old town, the Altstadt. Cobblestone streets and squares, churches, statues, historic buildings and an old stone bridge crossing the river make a nice day of sight-seeing.

From the tower of the Heiliggeistkirche (Holy Spirit Church) 200 or so winding steps from the statue of Hercules on the market place below, there is a great view of the town and Heidelberg&rsquo;s main attraction, the castle.

First built around 1300, the castle went through many changes through the centuries until it, along with most of the city, was destroyed by the French in 1693. Today, visitors wander through the castle visiting the giant barrel (it can hold 55,345 gallons of wine), the German Pharmacy Museum, and the terrace, with its view of the city and the river valley.

It turns out that in the end, the French destruction of the castle had a good side to it. The castle illumination, a fascinating light and fireworks show, draws thousands of spectators to the banks of the Neckar several times each year. The walls of the castle turn blood red, depicting fire, before the fireworks explode from the Old Bridge and above the castle.

The castle is also the backdrop to another Heidelberg highlight, the Schlossfestspiele, or Castle Festival. It is seven weeks of concerts and theater at the castle. This year &ldquo;The Student Prince,&rdquo; a classic Heidelberg operetta, will be performed in English again.

The Schlossfestspiele might be the centerpiece of the city&rsquo;s cultural offerings, but it is not the only one. Heidelberg is full of museums, and has theater, music and art shows year round.

The Hauptstrasse (Main Street) is one of Germany&rsquo;s longest pedestrian shopping lanes. Along with its side streets, it can be a shoppers&rsquo; paradise, lined with everything from department stores to upscale boutiques. You can find fine wine, Cuban cigars, antiques, art and fashionable clothing.

If shopping and sight-seeing have made you hungry, there is a cornucopia of eateries to choose from. In Heidelberg, there is food for all tastes, from Indian fast food to traditional German, to gourmet French-style dining.

If the city is multicultural in its food, there is also diversity in the languages you hear in the streets. It is not only the swarm of tourists Heidelberg draws that accounts for this, but also its students who give it its international flair.

Heidelberg is a city of education. Home to universities and colleges, many of its more than 25,000 students are foreign.

Germany&rsquo;s first university was founded here in 1386 and while it and the city might be old, it is its students who keep Heidelberg young at heart.

They also account for the number of cafes, bars, pubs and clubs in the city.

Heidelberg&rsquo;s night life has also been around for a long time, as the centuries- old student taverns like Zum Sepp&rsquo;l, Zum Roten Ochsen and Schnookeloch can attest. Many of the spots where the young and young at heart gather can be found on Untere Strasse, which runs parallel to Hauptstrasse, and Steingasse, the lane leading to the Old Bridge.

The spots range from the Grey Stones with its ultra-cool decorations to the simple H&ouml;rnchen. Throw in an Irish pub, taverns like the Weinloch and the Destille and add Cave 54, a jazz club, and the Schwimmbad (not in the city center) and you have the makings of a long fun night.

If all this is too much for you, take a blanket and a book and sit on the opposite bank of the Neckar. With the city and its castle as a backdrop, let life and the river pass you by.

If you go ...Heidelberg is just off Autobahn 5 in southwestern Germany. The way to the old city center &mdash; the Altstadt &mdash; is well marked, as are parking garages. There is practically no free parking in the center.

You can also get to Heidelberg by train, not a bad idea if you are planning on enjoying the city&rsquo;s many bars, pubs and clubs. The station is quite a way from the old town. Look for trams or buses heading toward Bismarkplatz. The beginning of Hauptstrasse is just across the street.

The Castle Festival, with theater and concerts on the castle grounds, takes place June 24 to Aug. 13 this year. The &ldquo;Student Prince&rdquo; will be performed in English July 30-31 and Aug. 1-2.

On June 3, July 8 and Sept. 2, the famed illumination of the castle starts at 10:15 p.m. The best viewing points are from the opposite bank of the Neckar.

Heidelberger Herbst, the Old Town Autumn Festival, takes place along Hauptstrasse and on the squares of the old town on Sept. 30. It features a flea market, a medieval market, an arts and crafts fair, regional food and drink, music and more.

The student taverns Zum Sepp&rsquo;l and Zum Roten Ochsen are on Hauptstrasse, while most of the other places are on Untere Strasse and other streets leading to the river. Cave 54 is on Kr&auml;mergasse, north of the Heiliggeistkirche, and Schwimmbad-Musik-Club is near the zoo at Tiergartenstrasse 13.