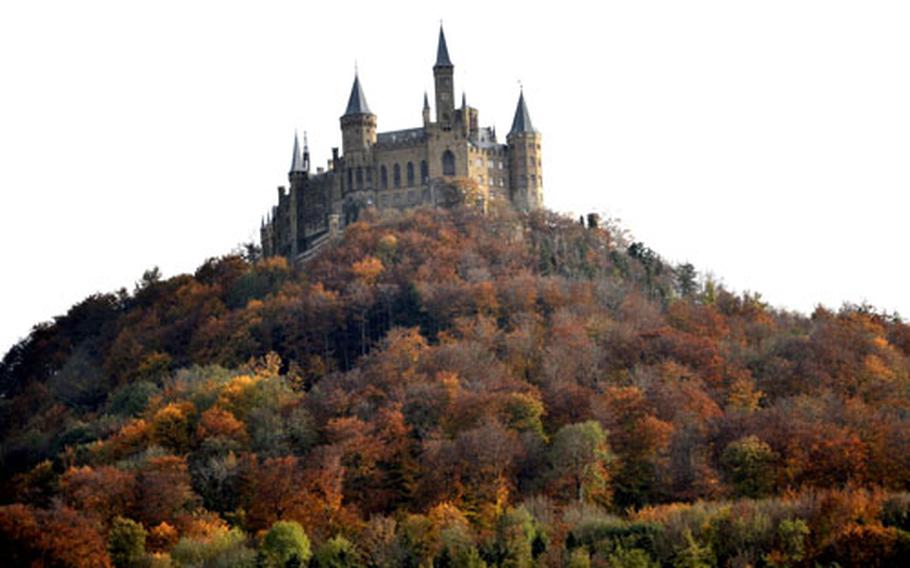 Hohenzollern Castle has been sitting on top of Mount Hohenzollern since the 11th century, although it has been destroyed or ruined twice and been rebuilt. (Warren Peace / S&S)

Hohenzollern Castle has been sitting on top of Mount Hohenzollern since the 11th century, although it has been destroyed or ruined twice and been rebuilt. (Warren Peace / S&S) 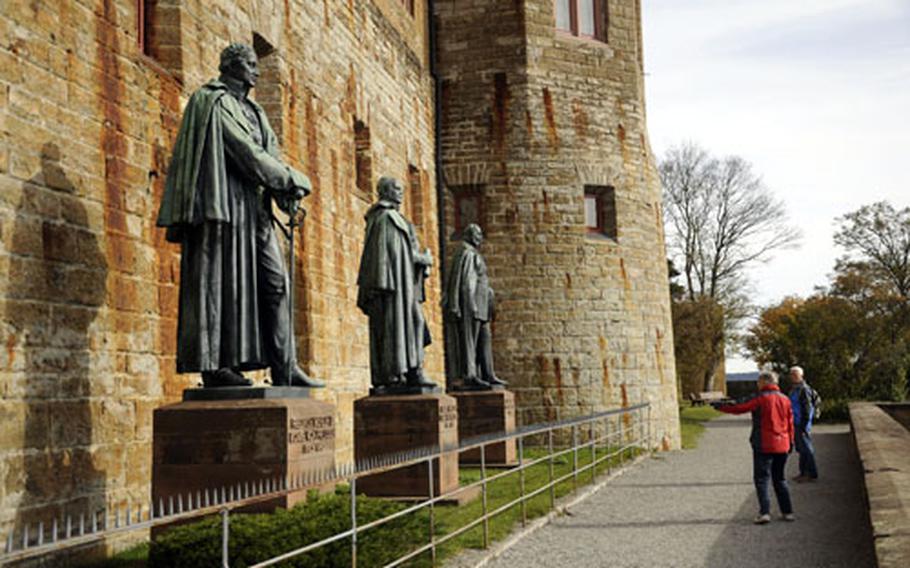 Statues of the rulers of Germany surround the perimeter of Hohenzollern Castle. The castle was first used as a seat of power in the 11th century. (Warren Peace / S&S) 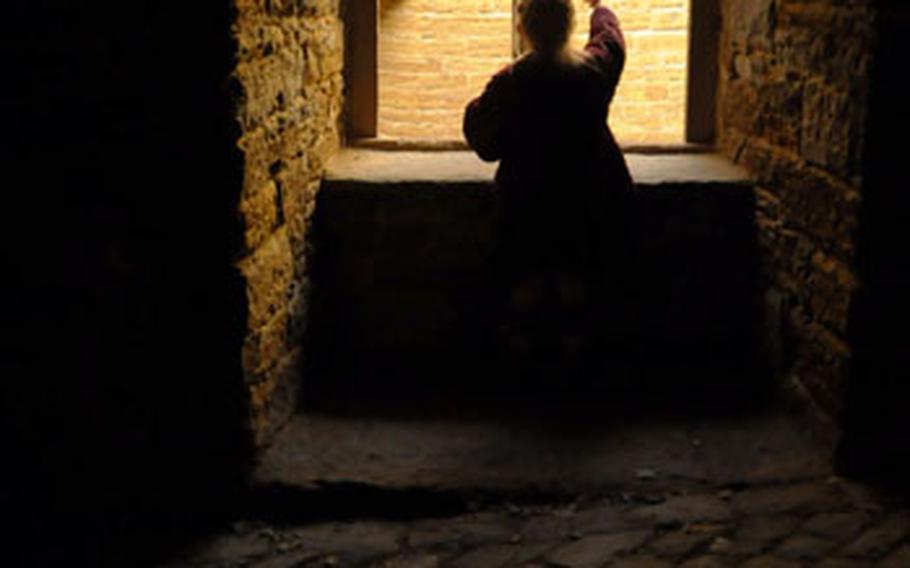 A young girl peers into an inner garden from a covered road on the Hohenzollern Castle grounds. The road leads to the main courtyard of the castle, where a gift shop, beer garden and chapel can be found. (Warren Peace / S&S) 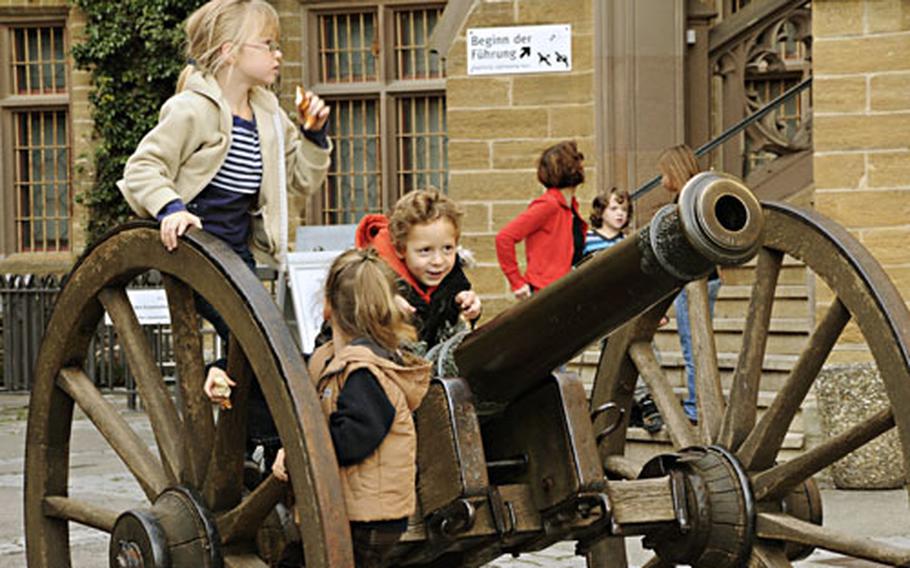 Children play on the antique cannon near the starting point of the Hohenzollern Castle tour. (Warren Peace / S&S) 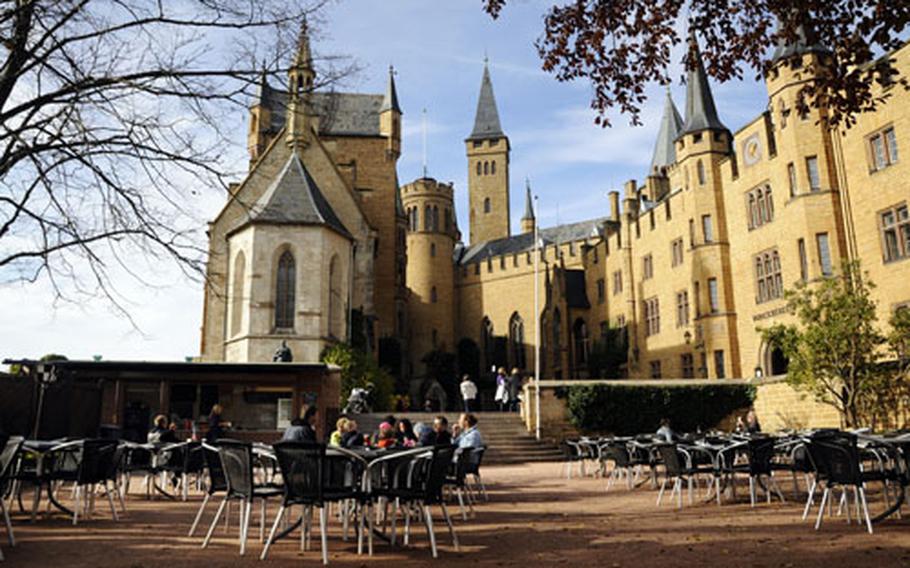 A beer garden in the center of the Hohenzollern Castle grounds. (Warren Peace / S&S)

Atop a foothill of the Swabian Alb mountain range, the house of the Hohenzollerns stands over the trees in an image that seems to have leapt from the pages of a fairy tale.

Hohenzollern Castle, built in the 11th century, was the home of the Hohenzollern family who ruled Prussia and Brandenburg in the Middle Ages. The castle, which was rebuilt several times through the years, is no longer occupied, but it is a popular tourist attraction about 40 miles south of Stuttgart, Germany.

As you approach the castle by car, it is visible from miles away. The profile of the Hohenzollern Mountain, rising nearly 3,000 feet above sea level, and the castle meld together to create what looks like a pyramid.

Once you arrive at the parking lot, about halfway up the mountain, you must decide whether to hike up the steep path or take the shuttle. If you decide to hike, be ready for a 20-minute walk up steps and steep inclines: Many visitors can be heard breathing heavily by the time they make it to the top. However, on the way up sightseers have a great view of the castle peering over the evergreens. During the fall, the path is surrounded by the autumn colors of the surrounding forest.

The hike will give you an appreciation for what Swabian attackers, in full battle dress, had to endure when they assaulted and destroyed the castle in 1423 during a 10-month siege.

As you enter the castle grounds, you will notice parts of the castle that seem older than the rest. Older sections not destroyed during battles and sieges have been preserved during the castle&rsquo;s different reincarnations.

The castle is now in its third life. It was rebuilt in a sturdier form shortly after the Swabian assault, but it gradually lost its strategic value. By the end of the 18th century, it was left to deteriorate. King Friedrich Wilhelm IV built what is standing today in the mid-1800s.

The castle&rsquo;s grounds feature two chapels that visitors can enter. It also has a beer garden with arguably the best view of the German countryside possible.

Within the castle is an important display of German history. The only way to see the inside is during a 30-minute guided tour. An English-language tour is available for groups by booking ahead. The tour features such treasures as the Crown of Wilhelm II and a letter from President George Washington to Baron von Steuben, a descendant of the Hohenzollern family, thanking him for his help during the Revolutionary War. Visitors also get a glimpse of the castle&rsquo;s rich past as they stroll through rooms decorated with tapestries, furniture from long ago and impressive artworks.

Sadly, no photography is allowed during the tour, but there is a souvenir shop selling books of photographs from inside and outside of the castle. The shop also sells local wines and small memorabilia.

If you like castles, history or just love taking in nature, add Hohenzollern Castle to your list of places to see. The view alone is worth the trip.

Know and go ...DIRECTIONS: Hohenzollern Castle is on the edge of the Swabian Alb, near the town of Hechingen, Germany, and about 40 miles from Stuttgart. By car, take Autobahn 81 and get off at the Empfingen exit, or take Highway B27, get off at the Burg Hohenzollern exit and follow the signs to the castle.

TIMES: By train, there are daily departures to Hechingen from Stuttgart&rsquo;s central station. There are buses running daily between Hechingen&rsquo;s bus station and Hohenzollern castle&rsquo;s parking lot.

COSTS: The shuttle that runs from the castle&rsquo;s parking lot up to the castle costs 80 euro cents for children and 1.70 euros for adults, one way. Discounts are available for groups and round trips. Entry into the castle grounds costs 4 euros and it will cost another 4 euros if you want to go inside the castle.

FOOD: A restaurant at the castle serves Swabian foods and drinks. A meal averages about 10 euros. There is also a beer garden that sells snacks.

INFORMATION: The castle&rsquo;s Web site is www.preussen.de, which offers an English-language option.