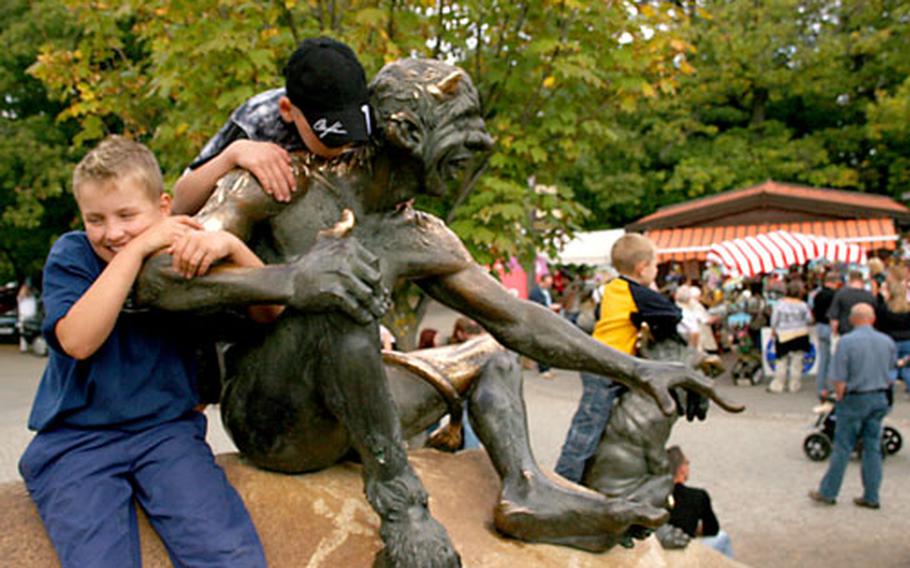 Children have little to fear from this devil on the Hexentanzplatz in Thale in Germany’s Harz Mountains. (Chris Gray / Special to S&S)

Children have little to fear from this devil on the Hexentanzplatz in Thale in Germany’s Harz Mountains. (Chris Gray / Special to S&S) 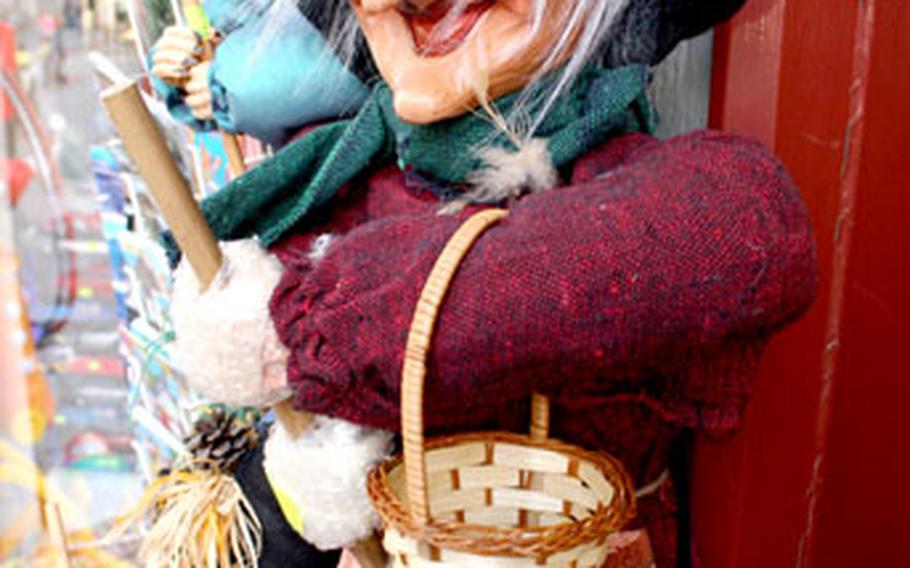 Witches — in the shape of dolls, puppets and key chains and on labels for schnapps, beer and sausages — are sold in shops throughout the Harz Mountains. (Chris Gray / Special to S&S) 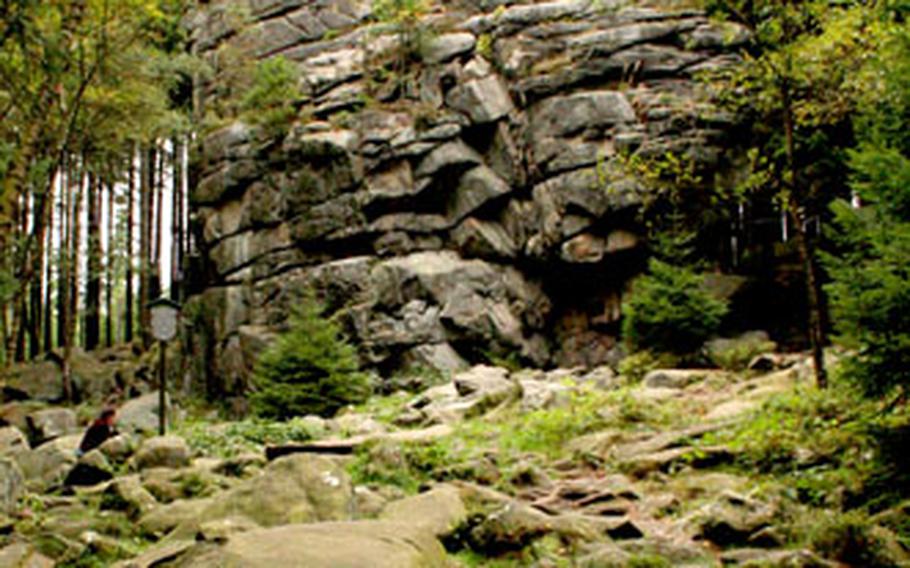 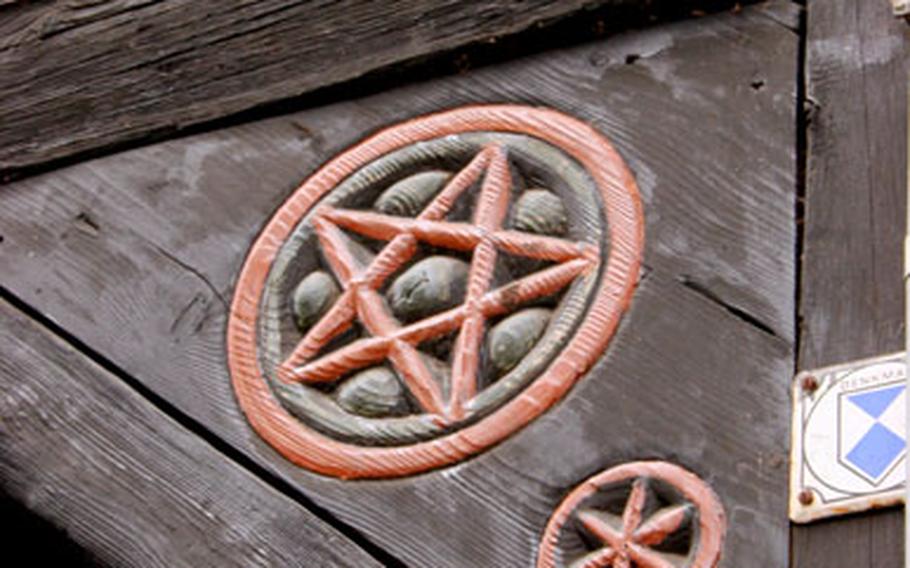 Historians say the people of Quedlinburg carved pentagrams into the beams of their half-timbered homes to ward off evil spirits. Several homes in the town still bear them. (Chris Gray / Special to S&S) 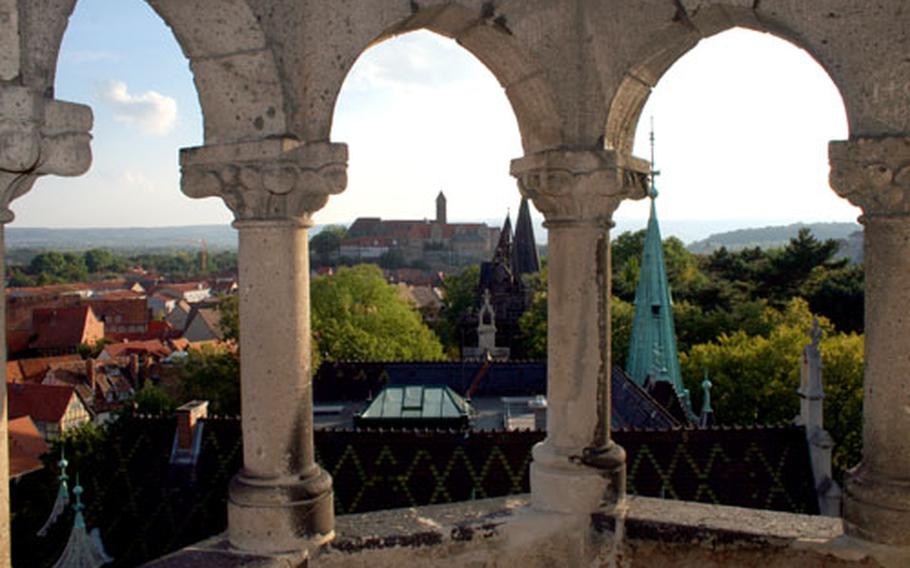 Quedlinburg, Germany, a town of half-timbered buildings, old churches and an ancient castle, sits on the edge of the Harz Mountains and is a good base for exploring the mountains and their witch tales. This shot shows the abbey of St. Servatius from a guard tower of the old town wall. (Chris Gray / Special to S&S)

Halloween is becoming increasingly popular in Germany, with American-style trick-or-treating and &ldquo;spooky&rdquo; events at places such as Frankenstein Castle, near Darmstadt, and at amusement parks.

But if you&rsquo;re looking for the supernatural side of Halloween, head for the Harz Mountains.

For centuries the people of the Harz have been consumed with witches. A highlight is the night of April 30, Walpurgisnacht, when Harz witches were said to join the devil atop the Brocken &mdash; the mountain range&rsquo;s highest peak &mdash; before descending with him into the underworld.

It is a frightful night throughout the region. Tens of thousands swarm the witchlore capitals of Thale and Schierke for the festivities, among them the age-old, witch-repelling ritual of rolling flaming bales of hay down the craggy mountains.

When Halloween comes around, the mountains are eerily quiet. But given its rich history of witch legends, and its stunning fall scenery, the Harz and its mystique conjure the perfect Halloween atmosphere.

The spirit of Halloween &mdash; a witches&rsquo; brew of traditions from the United Kingdom and Ireland &mdash; were familiar to early residents of the region. Its origin is an ancient holiday of the Celts, who built fortresses on the misty peaks. The Celtic festival Samhain, on Oct. 31, marked the beginning of the new year, a time when the natural and supernatural worlds were believed to mingle. The Germanic tribes that pushed the Celts out of the Harz made good use of its heights, too &mdash; as places of sacrifice.

The tales of Harz witches spread beyond its foothills. Cartographers sketched witches hovering above the Brocken on their maps, as the illustrated road signs in the Harz still depict. Goethe included a Walpurgisnacht gathering on the Brocken in &ldquo;Faust.&rdquo; And after German Inquisitors published the how-to-spot-a-witch guide, &ldquo;Malleus maleficarum,&rdquo; in 1487, Europe went on a rampage to take back the night, and began centuries of witch hunts.

The city of Quedlinburg burned 133 suspected witches in a single day in 1589. Just outside the Harz&rsquo;s foothills, the city is otherwise short of witchlore. But with Germany&rsquo;s best collection of creaky half-timbered buildings (more than 1,200, the reason for its World Heritage status) as a backdrop, and with Thale and Schierke within short and scenic drives, it&rsquo;s a good base for Halloween-season Harz exploration.

On a city tour there recently, I asked our guide why, since Quedlinburg doesn&rsquo;t have its own witch stories, witches were everywhere.

&ldquo;It&rsquo;s just something for people to sell,&rdquo; she replied with a smile as she led us down a narrow and darkened passage away from our previous stop, a house called Hell&rsquo;s Courtyard, just across from the Little Devil bar. Maybe &mdash; but so what? The witch dolls, witch key chains, witch cakes, witch beer, witch schnapps and witch sausages weren&rsquo;t hurting the mood.

Neither were the red pentagrams carved above the entryways of so many homes in Quedlinburg. &ldquo;Historians say they were for scaring away evil spirits,&rdquo; the guide explained.

Outside Quedlinburg stands the Teufelsmauer, or Devil&rsquo;s Wall, a ring of craggy rock outcroppings that, as legend has it, separated God&rsquo;s territory, the fertile north German plains, from the devil&rsquo;s, the Harz.

Down the road is Thale, huddled into a cleft in the Harz&rsquo;s northern peaks. Witches were said to gather on a bluff high above the town before flying off to the Brocken.

Their fabled meeting point, the Hexentanzplatz (the witches&rsquo; dance ground) is a disappointment. But the views it affords of the steep, forboding Bode Valley and the distant Brocken aren&rsquo;t. And the gondola ride up gives a good sense of what a broom flight to the top would be like.

But stop by anyway for a free look at the boulder shaped like Gene Simmons&rsquo; tongue on display in the foyer: The Germanic tribes that lived in these hills used it in their sacrificial rituals.

Continue on to Schierke, at the foot of the Brocken. The hiking trail Hexenstieg (Witches&rsquo; Ascent) connects Thale and Schierke and rises up to the Brocken&rsquo;s peak. If your legs aren&rsquo;t up to it, consider a ride on the Brockenbahn; the 19th-century steam train reaches the summit in about 45 minutes.

Just across the tracks from Schierke&rsquo;s Brockenbahn station is its other main attraction, the weird and massive rock formation, Feuerstein. You&rsquo;ll recognize the name from all the advertisements throughout the Harz for Schierker Feuerstein schnapps.

The liquor was brewed up by a Schierke pharmacist, whose grave in the cemetery just off the foot path to the Brockenbahn station offers another whiff of the supernatural. &ldquo;Wanderer, flee quickly from here,&rdquo; his headstone reads, &ldquo;or he&rsquo;ll come up and join you for a drink&rdquo; (it rhymes in German).

Your best bet for Halloween fun in the Harz, though, might be Thale&rsquo;s first Long Night of the Witches, scheduled for Oct. 30 &mdash; even though, according to an attendant at Thale&rsquo;s tourist information office, it has nothing to do with Halloween.

Fair enough, but it&rsquo;s no coincidence that Halloween falls opposite Walpurgisnacht in the seasonal cycle, and, in the Harz, was thought to be the night when witches emerged from their six-month hibernation in hell.

Chris Gray is a freelance writer living in Heidelberg, Germany. Write him at cmgray80@yahoo.com.

Know and GoGetting to the Harz

By car: From southern Germany drive north on Autobahn 5, continuing on Autobahn 7 past Kassel. Take exit 66 and head east toward Goslar, continuing on B6 toward Blankenburg and then Quedlinburg. To round out a Halloween-themed trip, consider a stop at Kassel&rsquo;s Museum of Sepulcral Culture (www.sepulkralmuseum.de) on your way home.By rail: Traveling in the Harz is easiest by car. Major rail hubs with connections to the Harz are Braunschweig and Magdeburg. The Harz&rsquo;s small-gauge rail network (www.hsb-wr.de, also in English) connects Quedlinburg and Schierke. The HarzElbeExpress (HEX for short, get it?) gets you from Quedlinburg to Thale in about 10 minutes. Web site: www.hex-connex.de.Events

Long Night of the Witches, Oct. 30 in Thale: for details, see www.thale.deHalloween Party, Oct. 28 in Schierke: see www.schierke-am-brocken.de/...Where to stay

Many of Quedlinburg&rsquo;s historic half-timbered homes are rentable vacation apartments. See Quedlinburg&rsquo;s Web site for listings (German only, under Ferienwohnungen) at www.quedlinburg.de/..., or ask Frau Vester at Hotel Theophano if her place is available.

See these sites for more details on the region: