Three-wheel pedicabs known as cyclos give tourists a way to take in Hanoi's attractions. It's also a bit of an adrenalin rush as the busy traffic weaves around the slow-moving vehicles. (Paul Alexander/Stars and Stripes)

Three-wheel pedicabs known as cyclos give tourists a way to take in Hanoi's attractions. It's also a bit of an adrenalin rush as the busy traffic weaves around the slow-moving vehicles. (Paul Alexander/Stars and Stripes) 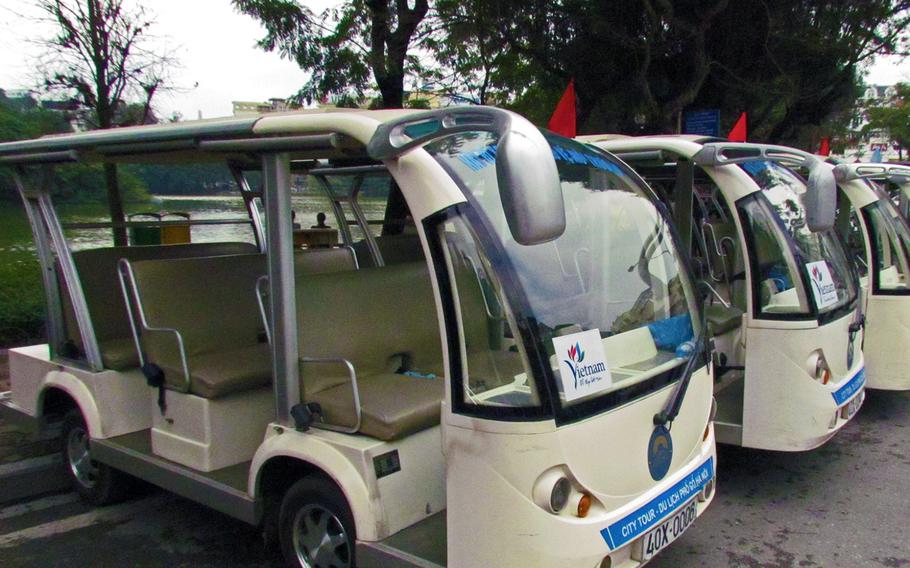 Hanoi's government has made some major investments to draw tourists. Those include a fleet of open-sided electric buses. (Paul Alexander/Stars and Stripes) 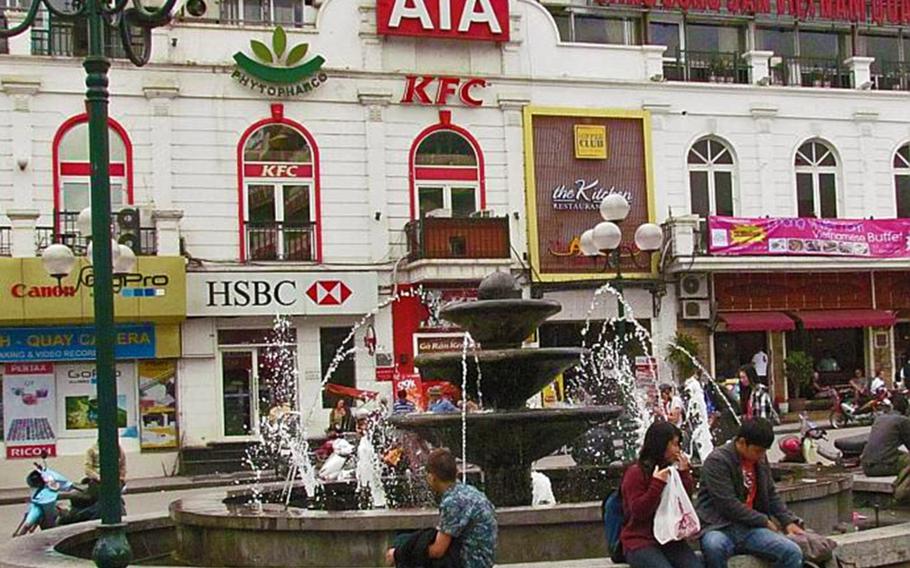 A few years ago, there were no American fast-food restaurants in Hanoi. Burger King and KFC have since moved in, though this KFC on the edge of Hoan Kiem lake offers rice instead of fries. (Paul Alexander/Stars and Stripes) 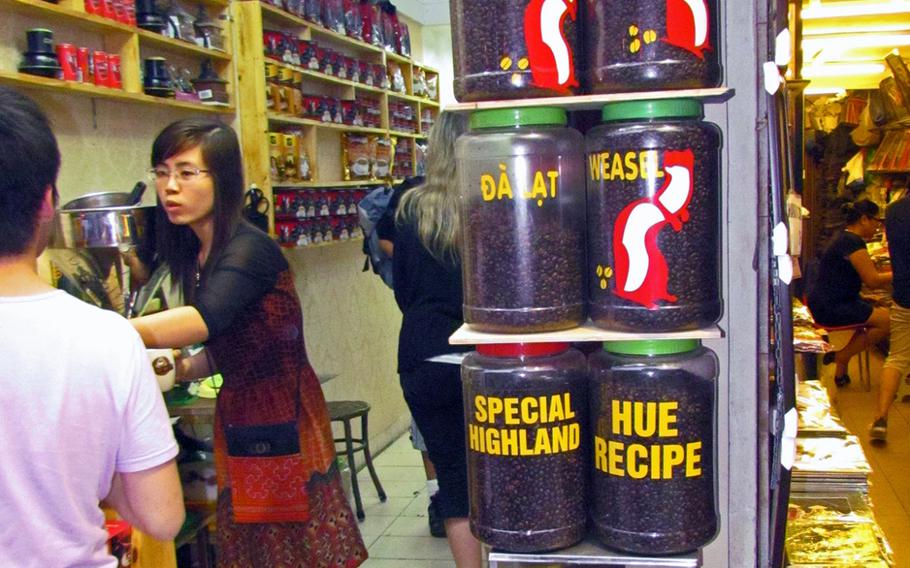 Vietnam is a thriving coffee producer. The various blends include pricey "weasel" coffee, in which coffee beans are swallowed by weasels, then excreted; connoisseurs say the process improves the flavor. (Paul Alexander/Stars and Stripes) The Huc Bridge connects the shore of Hanoi's Hoan Kiem to Jade Island. The Temple of the Jade Mountain, which dates to the 18th century, sits on the island. (Paul Alexander/Stars and Stripes) Hoan Kiem lake, in the center of Hanoi, draws tourists and residents alike, serving as the Vietnamese capital???s version of New York's Central Park. It's surrounded by cafes, shops and art galleries. (Paul Alexander/Stars and Stripes) 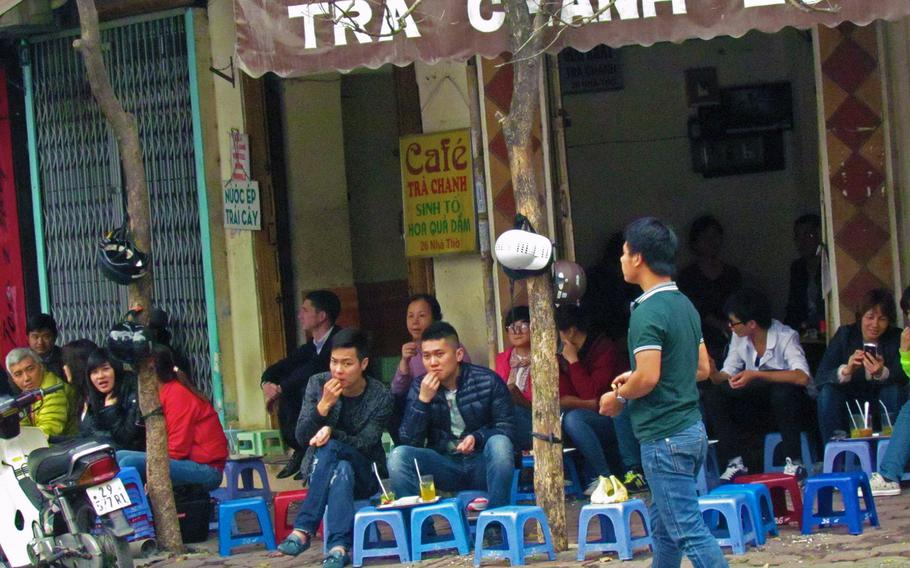 Hanoi's streets are full of life. Cafes and restaurants spill over into the sidewalks, leaving pedestrians with a maze to negotiate while avoiding the crazy traffic. (Paul Alexander/Stars and Stripes) The century-old Hanoi Opera House, modeled after Paris' Palais Garnier, is among the remnants of Vietnam's French colonial past. It underwent a major renovation in the late 1990s. (Paul Alexander/Stars and Stripes) 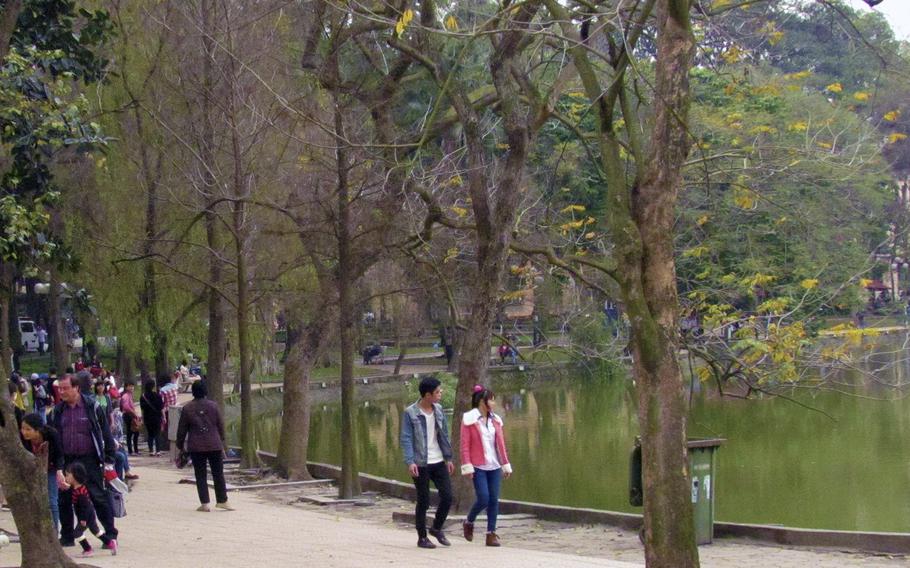 Hoan Kiem lake is the place to start in Hanoi. It wakes up before dawn as local residents flock there for tai chi or other exercise, and tourists soon follow. (Paul Alexander/Stars and Stripes) 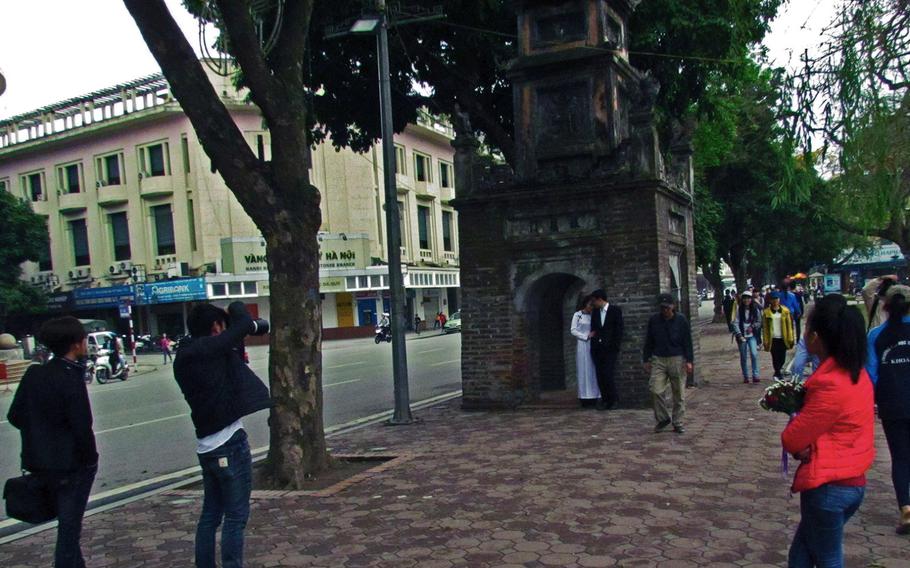 Picturesque Hoan Kiem lake is a popular place for young couple to have their wedding photos taken. (Paul Alexander/Stars and Stripes)

Hanoi, Vietnam, is a study in contrasts, a bustling but laid-back city that has worked hard to become a tourist attraction based on French colonial influences that fuse with Southeast Asian tastes and traditions.

Women sell fresh baguettes from baskets balanced on their heads as they walk past shops offering steaming bowls of Vietnam’s ubiquitous pho soup.

Lovely tree-lined streets, a thriving Old Quarter packed with shops and a legendary lake that serves as the capital’s heart provide plenty of attractions. Hanoi also is a steppingstone to the towering limestone islands of Ha Long Bay — listed as a World Heritage Site by UNESCO — to the east and the colorful Hmong people in the cooler highlands to the north.

This is a city made for walking, shopping and soaking up the sights by day and hitting an array of fine restaurants at night, capped by strong coffee and dessert at sidewalk cafes or cheap draft beer on plastic stools at the crowded and boisterous bia hoi outdoor bars.

With few traffic lights, it can be intimidating for pedestrians just to cross the street. The rule for neophytes is to take a deep breath, walk at a steady pace, and traffic will work its way around you. Don’t hesitate as the motorbikes whiz by inches away.

Hoan Kiem Lake is the starting point for visitors and residents alike. Legend has it that a Vietnamese emperor was given a magical sword there by a huge turtle. The sword was used to defeat an enemy horde, and the emperor then returned the sword to the turtle.

Sightings of that turtle’s offspring became so rare that people thought the species had possibly died out until one was spotted recently. It’s still unclear how many are in the lake.

Located in the middle of the city, the lake area wakes up early as residents head there for tai chi and other exercises amid the relative tranquility. They’re soon joined by commuters on two wheels and tourists on foot, in three-wheel bicycle taxis called cyclos or aboard a fleet of new open-sided electric minibuses.

Coffee shops and cafes surround the lake; there’s even a KFC at one end, though it serves rice instead of fries. There are almost as many art galleries with a variety of styles and price ranges, starting with simple but colorful watercolors and sketches that are cranked out in an hour or so and working their way up to lacquered paintings that take weeks or even months to produce.

There’s even a segment of artists who can crank out an oil copy of a family portrait or a masterpiece like the Mona Lisa in a day or two.

Other shopping choices, particularly handcrafts, compete to empty the tourist’s wallet. Silk clothing and ties make excellent gifts, and though prices have risen in recent years, there are still bargains to be found.

For a truly distinctive memento, consider a custom-made ao dai, the flowing silk tunic worn over loose pants for women. It’s so form-fitting — the motto is that it covers everything but hides nothing — that it requires up to 24 measurements.

The process of levying property taxes based on frontage has created a picturesque landscape of tall, narrow houses and hotels. There has been something of a building boom in tourist accommodations, ranging from dorm room beds starting at $6 a night up to luxury hotel chains. In between are a batch of boutique hotels with rooms going for $40-$60.

Parts of Hanoi were reduced to rubble by aerial bombardments from U.S. aircraft during what’s known here as the “American War” that followed a war of independence that ended French colonialism. But the remnants are few.

There is a war museum, and the infamous Hanoi Hilton prison that once held U.S. prisoners of war has been cleaned up and turned into a museum, too.

The body of communist revolutionary leader Ho Chi Minh — reportedly embalmed by the same Russian experts who preserved Russia’s Stalin and North Korea’s Kim Il Sung — lies on display elsewhere in the city. Lines are frequent for Vietnamese waiting to see it.

Signs of the ruling Communist Party’s control are subtle on the surface given the capital’s obvious capitalist leanings.

One is St. Joseph’s Cathedral, on a side street near the lake. The ornate Catholic church symbolizes the government’s ambivalent attitude toward religion, which it sees — along with the country’s fanaticism for soccer — as positive unifying factors. But it is uncomfortable about people putting God before patriotism.

Leaving Hanoi gives way to patches of lush green rice paddies that are largely cultivated the same way they have been for centuries with an irrigation system run on back-breaking muscle power by farmers in conical hats.

For day trips, the city is surrounded by a ring of villages specializing in one product. There’s a pottery village and a silk village; the latter is particularly popular because of the bargains that can be found there in all manner of silk textiles and displays of the production process, starting with silkworms.

For longer excursions, Ha Long Bay is good for at least an overnight trip, but consider the northern highlands. The Hmong culture is distinctively different, and there’s a good travel package that includes a Friday overnight on a special train with couchettes for sleeping, Saturday at a resort hotel and Sunday night by train back to Hanoi, where the smell of those baguettes overwhelm the train station at dawn.