Halkidiki: A slice of heaven in northern Greece One of the monasteries on Mount Athos, Greece, as seen from a boat on the Aegean Sea. Only men can go ashore on Mount Athos, so this photographer had to use her telephoto lens to get a better look. ()

One of the monasteries on Mount Athos, Greece, as seen from a boat on the Aegean Sea. Only men can go ashore on Mount Athos, so this photographer had to use her telephoto lens to get a better look. () 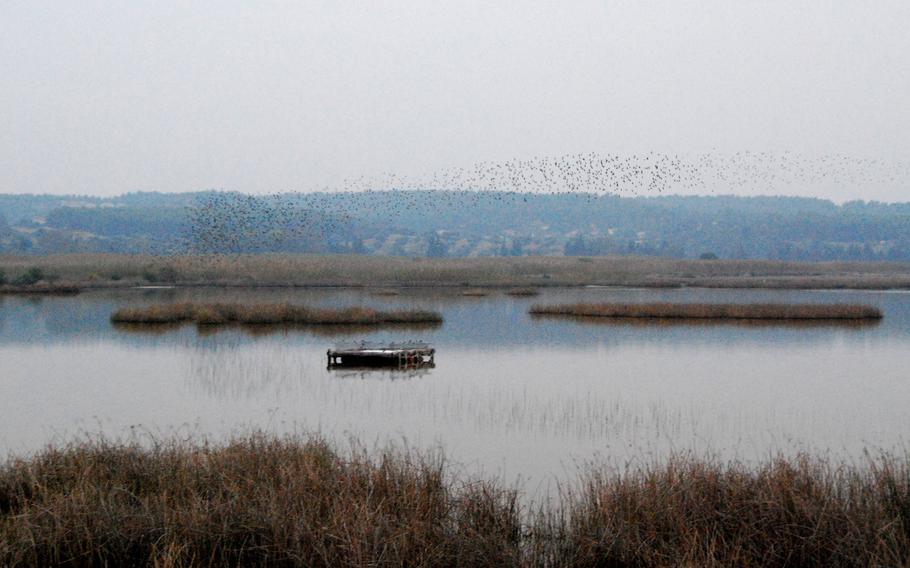 A flock of starlings twists and turns over Lake Stavronikita in the Sani Wetlands, a sanctuary for 270 different bird species in northern Greece. () Passengers on a boat tour along the shore of Mount Athos snap photos of one of the 20 monasteries on the peninsula. Boats carrying women must stay about a third of a mile from shore. () 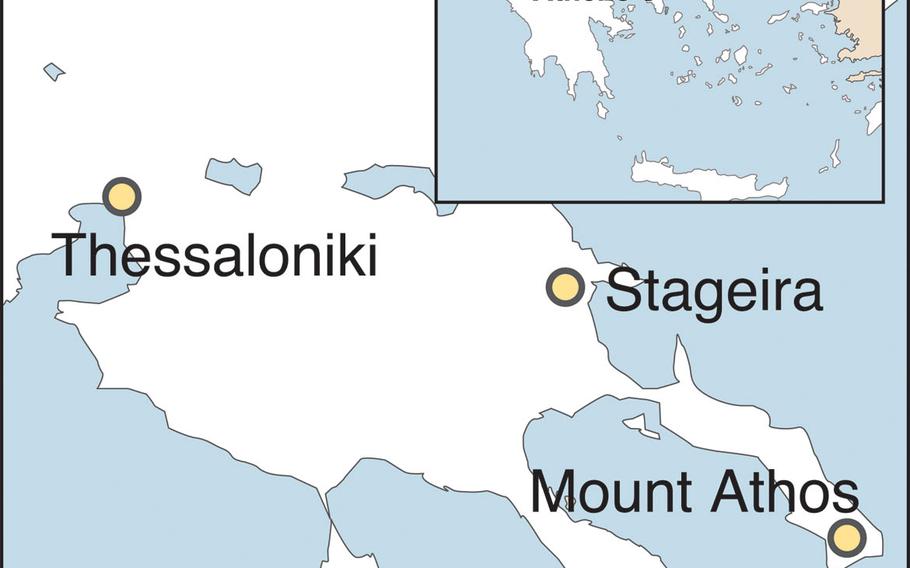 A black cloud moves across the sky, shifting shape and changing direction every few seconds.

“Common starlings,” said my guide as we watched several hundred birds fly in tight formation over the shallow water of Lake Stavronikita in northern Greece. Suddenly their precise acrobatics were accompanied by a high-pitched trill.

“Look how agitated they’ve become,” Chris Serafeimidis said, scanning the lake with binoculars until he found the reason. “A bird of prey.” He pointed out a large brown hawk that’s arrived on the scene. “He’s definitely a marsh harrier.”

Until then, I thought common starlings were simply that: common and uninteresting. But here in Halkidiki — a region on the northern mainland — I saw them with fresh eyes and discovered that birding combines nicely with my love of active, outdoor adventures.

At the Sani Resort, where I stayed, adventures like this are right on your doorstep. The resort sits on a curving expanse of sandy beach on the west side of the Kassandra peninsula, one of Halkidiki’s three finger-like peninsulas that jut into the Aegean Sea. Behind the resort is the 272-acre Sani Wetlands, which the owners work to protect through a partnership with a nonprofit wildlife group. Guests can take guided birding tours like the one I’m on.

“In the 1960s it was a huge swampland infected with malaria,” Serafeimidis told me. “Now, 270 species [of birds] can be found here. We have some clients who come just to watch the birds in May and September.”

It was mid-October when I visited, but it felt like summer. The next day’s forecast called for temperatures in the mid-80s. I filled a couple of water bottles before setting out to hike the Koutsoupia-Siviri Trail, which meanders along the cliff tops between Sani Resort and the nearby village of Siviri, a six-mile return trip.

The concierge at Sani Resort told me it’s one of the most beautiful trails in all of Halkidiki. It climbs gently into a pristine pine forest, hugging the cliff’s edge most of the way. The turquoise Aegean spread out beside me while I stayed cool in the shade of Aleppo pine trees — the same kind that produce the resin used to flavor retsina, the popular Greek wine.

About halfway to Siviri, the trail descends to a beach. It was busy with vacationers at one end and nearly deserted at the other. Since I forgot to bring my bathing suit, I headed to a secluded spot on the quiet end for a refreshing dip.

Early the next morning I got into my rental car for the 2.5-hour drive to Mount Athos, Halkidiki’s eastern-most peninsula. The bottom half is a self-governing community of 20 monasteries, home to 2,200 monks. A pilgrimage here has been described as a trip back in time, to the roots of Orthodox Christianity with its Byzantine architecture, rare icons, priceless art and precious manuscripts.

Unfortunately, only men are allowed to step foot on what locals call the Holy Mountain; women have been banned since 1046. For me, a three-hour boat trip along one side of Mount Athos had to suffice. While the forested slopes and rugged shoreline are scenic, it was hard to appreciate architecture from a third of a mile away (the distance that boats carrying women must maintain). My disappointment, however, soon evaporated when a man started to play an organ and sing, bringing Greeks on board to their feet. It wasn’t quite “My Big Fat Greek Wedding,” but close.

Back in my car, I discovered that the northern part of Mount Athos has a gentler shoreline with beautiful coves and sandy beaches. I stopped to explore the site of the ancient city of Stageira — birthplace of Aristotle — then headed to the nearby village of Olympiada. It’s a quiet resort town known for the mussels produced in the exceptionally clean water offshore.

At a restaurant called Akroyiali, chef Louloudia Alexiadou presented me with one of her signature dishes — octopus cooked with local figs and honey. She told me it’s her recipe, though her fisherman husband Andreas gets credit for catching the creature. After a few mouthfuls, I was not surprised when she confided that she has a happy family. “They’re all happy when I cook.”

Driving back to Sani Resort on a different route, I discovered yet another part of Halkidiki — the ruggedly beautiful interior. The road winds through deciduous forest, then up and over a plateau that’s covered in fading pink and purple heather blossoms. It appeared I’d missed the peak bloom by a couple weeks. At first I lamented my bad timing, then I realized I’ve found another reason to return.

Suzanne Morphet is a freelance writer based based near Victoria, British Columbia. She was hosted by Marketing Greece, Aegean Airlines and Sani Resort.

Stay Sani Resort is an hour’s drive from the airport of Thessaloniki.www.sani-resort.com/en_GB

Eat Sani Resort has 17 restaurants on its property and a Dine-Around Program that allows half-board and full-board guests to sample many of them.

Do Sani Resort has walking and cycling trails, tennis courts and a scuba-diving center. Bird-watching tours are offered daily by an in-house naturalist.

Half-day boat tours of Mount Athos are offered by Athos Sea Cruises for 20 euros per person from the port town of Ouranoupoli; athos-cruises.gr