Grado: A little place with a lot to offer 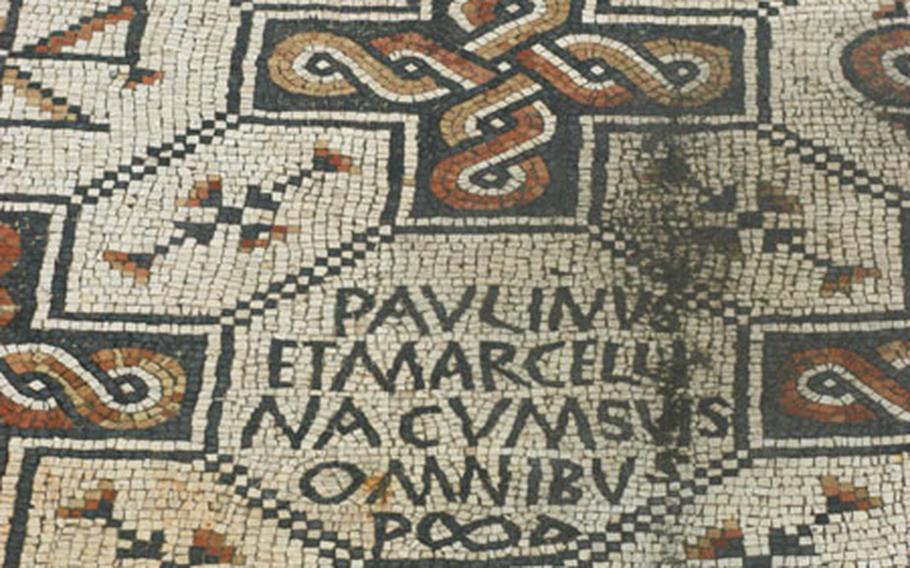 Though they pale in comparison to those in nearby Aquileia, mosaics in Grado are still eye-catching. (Kent Harris / S&S)

Though they pale in comparison to those in nearby Aquileia, mosaics in Grado are still eye-catching. (Kent Harris / S&S) 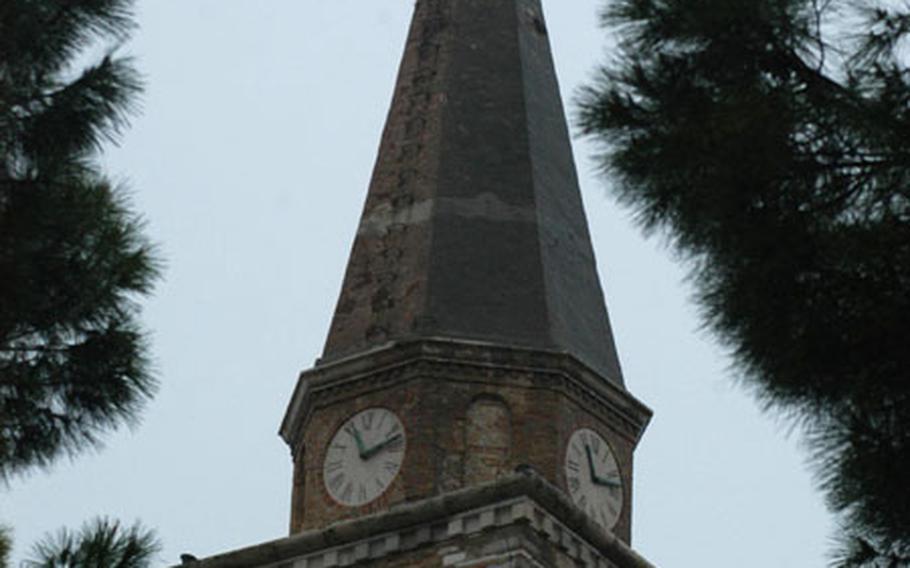 The steeple of the Basilica di Sant&#39; Eufemia towers over much of the old town section of Grado, Italy. The city is a little more than an hour&#39;s drive east of Venice. (Kent Harris / S&S) 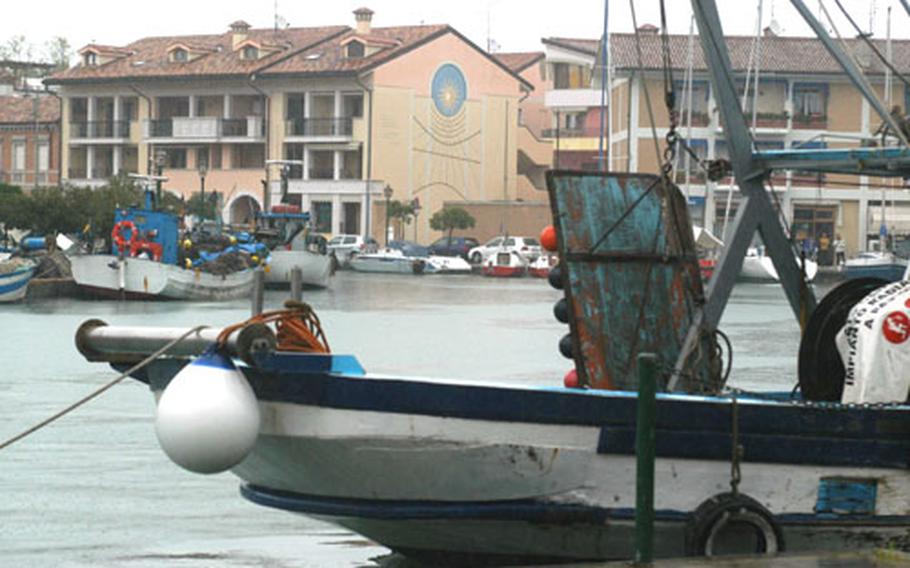 Tourism is important to Grado. But the city has relied for centuries on its fishing industry and that&#39;s still an important part of the economy today. Sight-seeing trips of the surrounding lagoon and other areas are also available by boat during the summer. (Kent Harris / S&S) 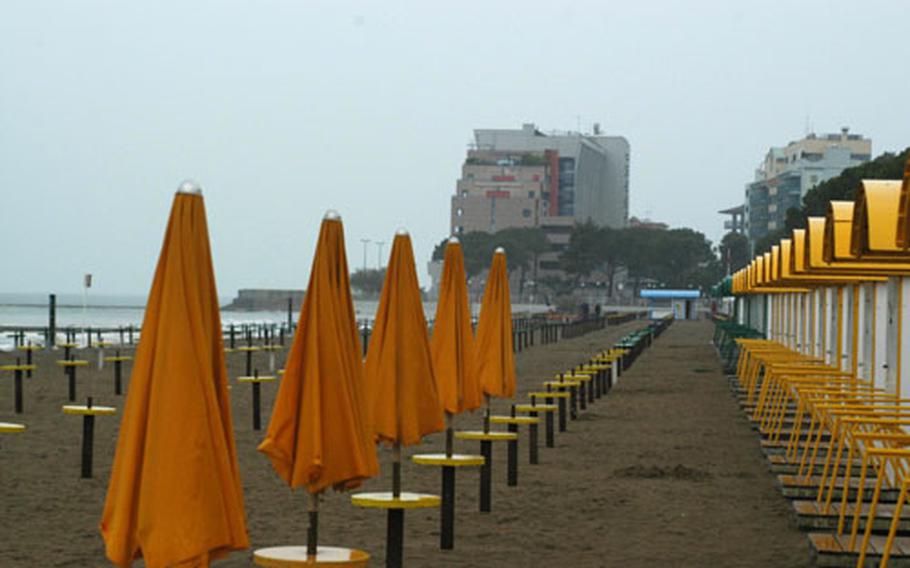 The umbrellas and changing rooms on the main beach in Grado, Italy, are pretty lonely in early May, especially when it&#39;s raining. But the tourist season starts in a few weeks and by midsummer the beach will be full of people. (Kent Harris / S&S)

GRADO, Italy &mdash; People have been fishing in the waters off the Island of the Sun for thousands of years.

So if you&rsquo;re in the mood for a meal in this city of about 10,000 residents in northeastern Italy, seafood is probably a good bet. Dozens of restaurants feature fresh fare from the Adriatic Sea on their menus every day.

But while the fishing industry remains a large part of the city&rsquo;s economy, the fact that there are dozens of restaurants in a place this size suggests that tourism now plays a big role as well.

So do the hundreds of umbrellas and changing rooms that crowd the beaches along the southeast and northwest portions of the city. But unlike some other towns along the coast between Venice and Trieste, Grado has more to offer than just its beaches.

It provides easy access to other interesting spots nearby and some history of its own.

The Romans were here, and there are still some ruins to prove it. Of course, they were in other nearby areas in larger numbers. Aquileia, just a few kilometers away, was once the fourth most important city in the Roman Empire. And the mosaics that line the floor of the basilica there put those in Grado to shame. But that doesn&rsquo;t mean Grado&rsquo;s Basilica di Sant&rsquo; Eufemia, which dominates the old quarter of the city, isn&rsquo;t worth a look. On a cloudy day &mdash; and there are some despite the island&rsquo;s name (L&rsquo;isola del sole in Italian) &mdash; the church&rsquo;s interior is dark and mysterious.

When the sun comes out, so do the tourists. Especially in summer. The whole coastline is popular not only with Italians, but with their Germanic neighbors to the north. In fact, more people in the area are likely to speak some German than English. For a few euros a day, an American visitor can rent a spot on the beach, soak up the sun and pick up a few new languages.

There are also some free beaches to the east of the city, as well as several dedicated compounds offering all sorts of recreation and amenities to tourists. And the road that passes by those is the main road on the island. It&rsquo;s connected to the mainland by a pair of bridges. The easiest one to access lies to the north of the city and is just about 18 miles south of the A4 autostrada.

From that bridge, it&rsquo;s possible to see the small island of Barbana and the church that dominates it. That&rsquo;s one of several destinations where tourists can take a boat ride during the summer. Others include a swing through the Grado Lagoon and chances to see aquatic creatures day and night.

For those who would rather stay on land, the city is a fine place for walking.

Vehicles are restricted in large sections and there are several small parks. A concrete promenade spans much of the city&rsquo;s shore, separating the two beach areas.

Or those interested in watching a bit of the city&rsquo;s living history &mdash; its fishing industry &mdash; can head to the north shore and check out what&rsquo;s soon to be on the menus at the local restaurants.

Directions: Grado is on an island south of the A4 autostrada that connects Venice and Trieste. It&rsquo;s less than an hour&rsquo;s drive southeast of Aviano Air Base. From the east, head toward Trieste and take the Palmanova exit. It&rsquo;s the first one after you skip the chance to head north via the A23 to Udine (and on to Austria and Germany). From there, signs are posted for the 26 kilometers it takes to get to Grado.

Time: The city&rsquo;s beach is open May 8 to Sept. 12. The basilica is generally open from about 8:30 a.m. to 6:30 p.m. (no admission charge). Schedules for boat departures vary depending on season and demand.

Food: Sea food and eat it. Grado boasts dozens of restaurants, with most offering fresh fare from the Adriatic. As in all of Italy, pizza and gelato are readily available.

Info: There&rsquo;s not much English spoken in the city&rsquo;s main tourist office in the south of the city (near the beach). You&rsquo;d have better luck with German. But there is a multitude of brochures, several with English text. Internet sites include: www.grado.it (English); www.gradoit.it (English) and www.isoladelsole.it.