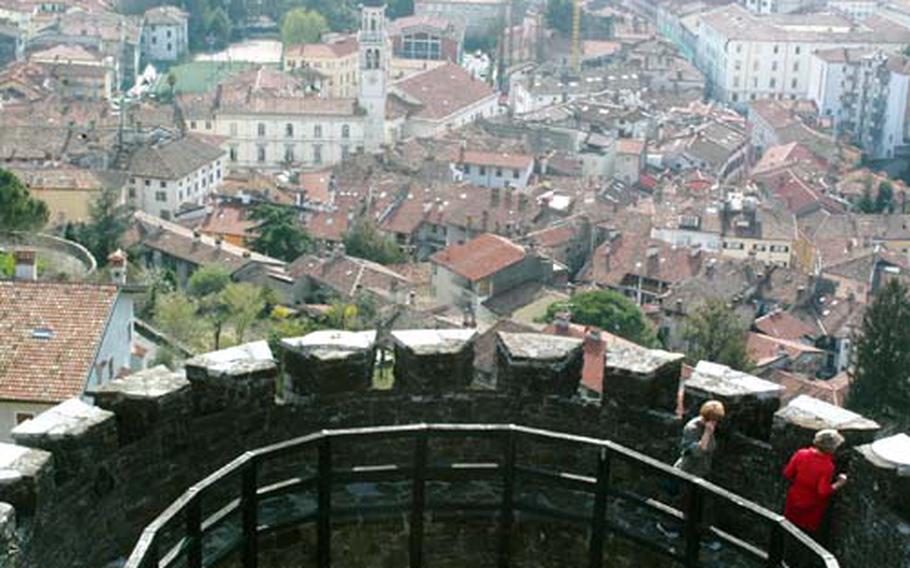 Visitors to Gorizia, Italy, won’t see a lot of fellow tourists this time of year. These two women -- at right in the castle tower -- were two of the few to visit the city’s castle during a sunny day last week. The city along the border between Italy and Slovenia is off the main tourist routes, but only an hour from Aviano Air Base. (Kent Harris / S&S)

Visitors to Gorizia, Italy, won’t see a lot of fellow tourists this time of year. These two women -- at right in the castle tower -- were two of the few to visit the city’s castle during a sunny day last week. The city along the border between Italy and Slovenia is off the main tourist routes, but only an hour from Aviano Air Base. (Kent Harris / S&S) 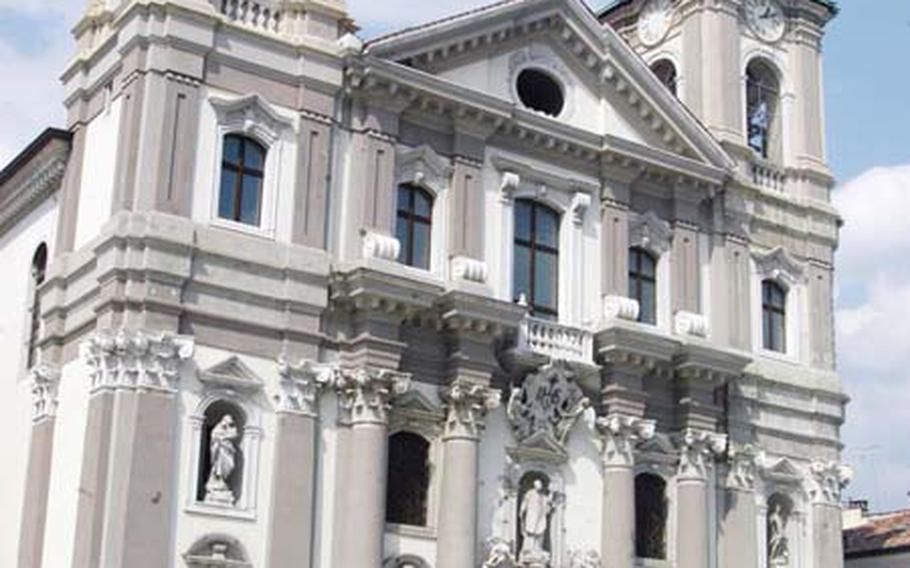 The Chiesa di Sant’ Ignazio dominates Piazza Vittoria in Gorizia, Italy. It took almost 100 years for the Jesuit order to finish the church, which has a colorful interior. (Kent Harris / S&S)

Cities such as Rome, Florence and Venice scream "Italian" (or at least say it very loudly).

But some others, such as Gorizia, a midsize city along the border with Slovenia, are a much harder read. That&rsquo;s mostly because of the multitude of cultures (and languages) that come into play.

Gorizia has changed hands several times in the last few hundred years, with various incarnations of modern-day Austria, Italy and Slovenia in control. After World War II, the border between Western and Eastern Europe ran right through the city. Much of it was placed on the Italian side, with what generally is known as Nova Goricia on the Slovenian side. Visitors can get sweeping views of both countries from Castello di Gorizia, which sits atop a large hill in the city center.

The castle and much of the city date only to the 19th century, though at least parts of some buildings are much older. Gorizia was heavily bombed in World War I and, according to the book "Authentic Veneto Friuli," the fascist Italian government rebuilt it rapidly. Fascists weren&rsquo;t generally known for architectural elegance. Neither were the Communists on the other side of the Yugoslav border.

Still, there are several sights worth visiting in Gorizia.

The castle, rebuilt to what it resembled in its glory days, offers views and a bit of history, especially for Italian speakers. Highlights include a small armory on the first floor, the Hall of the Provincial States on the second and a room with miniature models and history of the castle (in Italian) on the third. The views are also much better from atop the inner castle walls than from the outer walls. So paying the 3-euro entry fee is a good idea, especially since it also provides admission to four museums and a palace.

Note that the Italian side of the border is much more built up than the Slovenian side, though a few new shopping outlets show that is gradually changing.

The castle overlooks Piazza Vittoria, a large gray area with a few fountains surrounded by shops, but dominated by Chiesa di Sant&rsquo; Ignazio. Built by the Jesuits in the 17th and 18th centuries, it features a pair of bell towers capped by blue onion domes. Inside, there&rsquo;s a rainbow of colors, with varying shades of marble, stucco and paintings all contributing.

In contrast, the city&rsquo;s Duomo &mdash; the cathedral &mdash; a few blocks away is much more restrained colorwise, though its gray marble columns support arches that are also heavily ornamental.

The cathedral is just off a series of streets that wind up to the castle. Two museums, the Musei Provinciali di Gorizia (provincial museum) and Museo della Grande Guerra (Museum of World War I) sit near the top of the hill beneath the castle.

There are also a few city parks to the west of Piazza Vittoria as well as a handful of palaces scattered throughout the historic center that survived the bombing.

On the QDirectionsIt&rsquo;s just more than an hour&rsquo;s drive from Aviano Air Base to Gorizia. Take Autostrada 28 to A4 and head east toward Trieste. Take the Gorizia exit, drive northeast and follow the signs to the centro (city center). Piazza Vittoria is the main square. The castle sits atop a hill overlooking it and the rest of the city.TimesCastello di Gorizia (the castle) is open from 9:30 a.m. to 1 p.m. and 3 p.m. to 7:30 p.m. daily, except Mondays, through Sept. 30. From Oct. 1 through March 31, it&rsquo;s open 9:30 a.m. to 6 p.m. The Duomo (cathedral) and Chiesa di Sant&rsquo; Ignazio are generally open from 8 a.m. to 7 p.m. and close for lunch.CostsA ticket for the castle costs 3 euros and is also good for admission to Palazzo Coronini Cronberg and four museums, including the Musei Provinciali Di Grocia, the provincial museum, near the castle. Park downtown in a space outlined in blue and you&rsquo;re expected to pre-pay at a meter. Spaces near Piazza Vittoria cost 1 euro an hour. There&rsquo;s also a public lot a few blocks south and west of Piazza Vittoria in Piazza Cesare Battisiti that costs slightly less (80 euro cents an hour).

FoodGorizia&rsquo;s cuisine reflects the influences not only of Italian and Slovenian traditions, but the Germanic neighbors to the north. Polenta (corn meal) is a typical dish served throughout northeastern Italy. Goulash (a spicy stew) comes from the east. Fish dishes come from Trieste to the south.

InformationThe tourist office can be difficult to find. It&rsquo;s at 9 Via Roma, a few blocks south of Piazza Vittoria. It&rsquo;s open 9 a.m. to 7 p.m. Monday through Saturday and 9 a.m. to 1 p.m. on Sunday. The staff speaks English and can be contacted by telephone at 0481-535-764, by e-mail at info.gorizia@turismo.fvg.it , or though the region&rsquo;s Web site, www.turismo.fvg.it

English is well down the rung of languages spoken locally, following Italian (and the local dialect), Slovenian and German.