Get elephant’s-eye view through riding course in Thailand 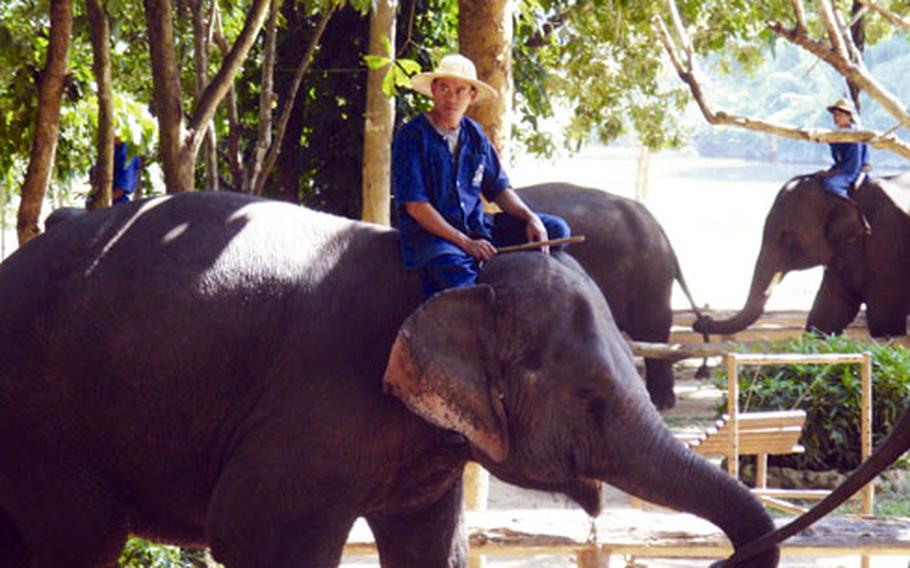 Elephants walk in a ring during a show at the National Elephant Institute in Thailand. The Institute helps rehabilitate injured elephants and works for better treatment of elephants in Thailand. (Photos by Ashley Rowland/S&S)

Elephants walk in a ring during a show at the National Elephant Institute in Thailand. The Institute helps rehabilitate injured elephants and works for better treatment of elephants in Thailand. (Photos by Ashley Rowland/S&S) 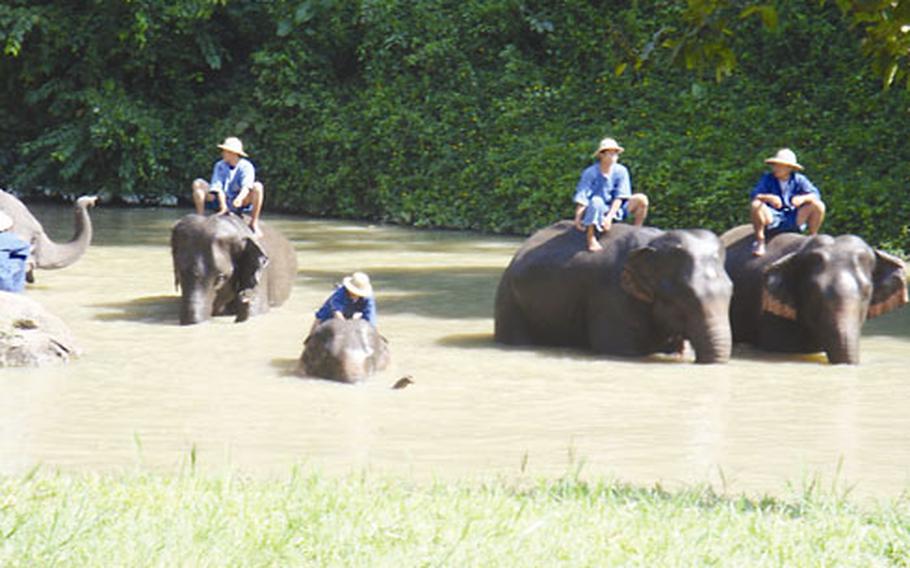 Elephants bathe in a creek on a 90-degree November afternoon at the National Elephant Institute. () 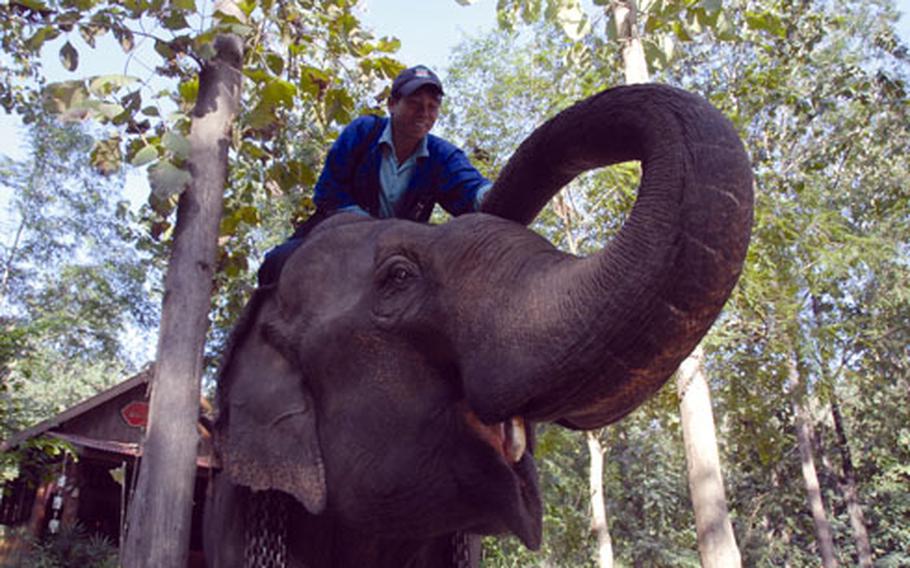 Elephant Dor Satit and his mahout, Sak, after a training session with tourists at the National Elephant Institute. () 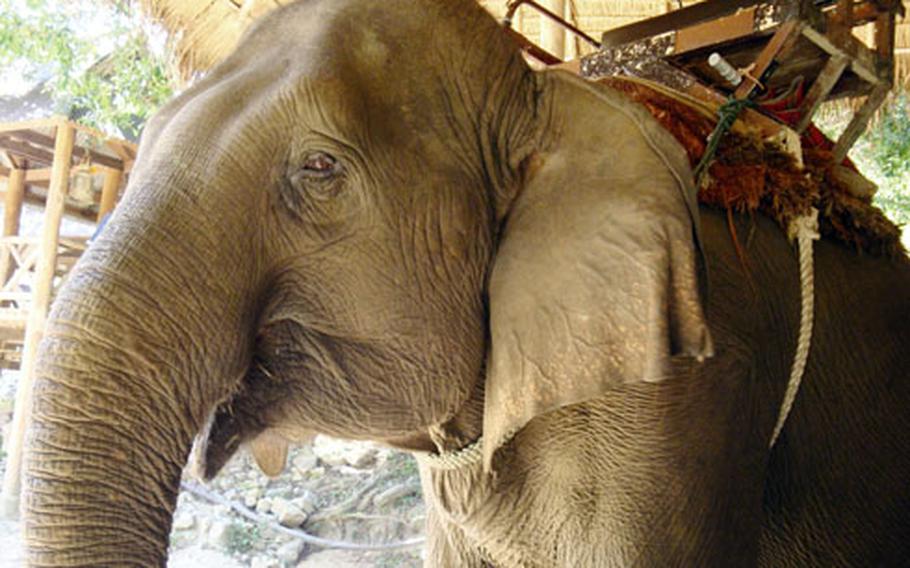 An elephant waits for a rider inside a pavilion at the National Elephant Institute. ()

Two trainers stood behind me and yelled, "Go, go, go!" Muscles already sore and strained, I took a running start and jumped again.

I ended up clutching my elephant&rsquo;s ears and ungracefully dangling over his lowered head, several inches off the ground &mdash; again. And as before, the trainers ended up alternately sighing and laughing at me, the slow one in the class, before hoisting me onto his neck.

Mahout School Lesson Number One: Jumping over an elephant&rsquo;s head and onto his neck is harder than it looks.

Mahout School Lesson Number Two: Pretty much everything about being a mahout, or elephant trainer, is harder than it looks.

A friend and I recently took a one-day elephant riding course at the National Elephant Institute, a well-known and well-respected elephant conservation center in rural Thailand. The center is in rural northern Thailand, about a half-hour away from the nearest city of Lampang. Only a handful of international tourists visit the Mayberry-sized town, and most of them are there to spend the night before or after going to the Institute, which promotes humane treatment of elephants and eco-friendly tourism.

The center is a quiet, sprawling compound of bright green jungle for its 70 elephants and training and demonstration areas for the tourists. The center also has a hospital where it treats injured elephants for free, since some owners won&rsquo;t pay for expensive veterinary care when their animals become sick.

Elephants have traditionally been used for labor and transportation in Thailand&rsquo;s forests, but they&rsquo;re becoming obsolete because of modern technology and today are nearly extinct there. Many of the remaining elephants are used in illegal logging or are mistreated, sometimes by owners who drug and parade them through Bangkok, Chiang Mai and other heavily-touristed cities for tips.

We arrived at the Institute at 8:30 a.m., and started the day by donning a mahout suit &mdash; a loose, blue denim shirt and matching baggy pants that tied in front instead of using buttons or zippers.

Our guide, a pint-sized Thai woman named Tu, gave us a lecture in Elephant 101.

She told us that elephants usually gestate for 18 to 22 months, with males taking longer to deliver because they&rsquo;re bigger, and live for as long as 70 to 80 years. They typically eat 200 kilograms of food per day and excrete 50 kilograms of dung. Asian elephants are shorter and have smaller ears than their African cousins. Their leathery skin is surprisingly sensitive, so much so that an elephant can feel a mosquito bite or a rider&rsquo;s legs tense if he becomes nervous.

We were then given a list of 15 verbal commands &mdash; in Thai &mdash; to use with the elephant, including stop, walk forward, walk backward, drink, and use his trunk to pick up something from the ground.

Tu then showed us three ways to climb onto the elephant. First, by grasping his ears and stepping onto the animal&rsquo;s lifted foot like a stool and swinging your other leg over his neck; second, by climbing onto his neck as he lays on his side; and third, by hopping over the front of his lowered head towards his back, then turning around and facing frontward.

Tu scaled her elephant effortlessly, like a monkey climbing a tree. But for us beginners, it was a different story.

I was assigned to Dor Satit, a speedy &mdash; for an elephant &mdash; 34-year-old male who liked taking baths and overtaking other elephants as we traveled via convoy from one spot to another.

At about 9 feet tall, Dor Satit also happened to be the tallest elephant assigned to my class of eight. Since none of the real mahouts seemed worried about me, a reasonably athletic female of average height, climbing onto the elephant, I didn&rsquo;t worry, either.

For some reason &mdash; I blame the extra-tall elephant &mdash; I could never find Dor Satit&rsquo;s lifted foot when I tried to climb on, or jump high enough to scale the two lobes on his very large head. One mahout was assigned to each student. After one of several failed &mdash; and probably painful for the elephant &mdash; attempts to climb on, my mahout, Sak, told me to rub Dor Satit&rsquo;s face and apologetically tell him "dee mak," Thai for "good job."

During the lesson, Sak pointed to a fresh pile of dung underneath Dor Satit and then a wheelbarrow.

"Your job," he said, and handed me a shovel.

Once I got on the elephant, it wasn&rsquo;t so bad. Elephants move exactly as you would imagine &mdash; slow and lumbering. They&rsquo;re covered in black hairs about 1 to 3 inches long, and every few minutes, they lift their trunks &mdash; a kind of powerful, all-purpose compass and forklift &mdash; halfway in the air, sniffing for food, other elephants and humans.

We spent most of the day practicing mounting and dismounting, and riding our elephants around the center. I don&rsquo;t know if Dor Satit understood my heavily-accented Thai commands, but he always obeyed the real mahout who sat behind me unless he felt like veering off the path to munch on some leaves.

After several hours, I knew the commands well enough to be worried when the mahout shouted, "mak long!" as we waded through a deep stream. Sure enough, Dor Satit promptly rolled onto his side, dumping me in the water and giving himself a cooling, much-deserved bath. Sak laughed &mdash; a little too hard &mdash; as I swam back to the elephant and awkwardly climbed on. He laughed even harder when he called out "mak long" again, and I got a second dunking.

The center also has two- and three-day homestay and jungle trek programs that run 5,800 to 12,000 baht, or about $165 to $341, or longer courses for serious mahouts. After a few hours of mahout training, we decided we had enough. Riding an elephant is uncomfortable, and uses inner and outer thigh muscles that most of us rarely exercise &mdash; compare it to riding a really big horse.

My neck and shoulders were so sore the next morning that I could barely turn my head. But that was from hanging on to the elephant&rsquo;s ears for dear life, not from riding him.

Mahout School Lesson Number Three: Next time you plan to ride an elephant, take a couple of aspirin beforehand.

For more information, go to www.thailandelephant.org/eng/home.php3

-Book ahead. Training courses are booked months in advance.