While the band plays, wine queen Julia I receives a rose from each of her admirers — apparently several, judging by the size of the bouquet in her arms. (Peter Jaeger / S&S)

While the band plays, wine queen Julia I receives a rose from each of her admirers — apparently several, judging by the size of the bouquet in her arms. (Peter Jaeger / S&S) 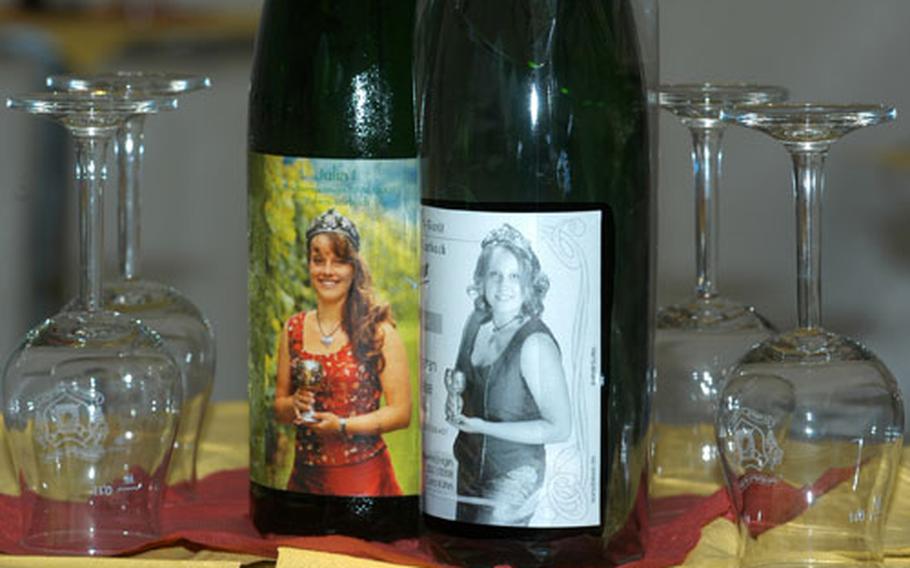 Both Julia Bitsch, left, the retiring wine queen, and Cora Kühn, 20, the new wine queen of Traben-Trabach, Germany, are honored on their own wine labels. (Peter Jaeger / S&S) The final get-together on stage inside the festival tent with the two queens, members of the guild and town officials. (Peter Jaeger / S&S) Julia Bitsch, 22, in her costume as Weinkönigin Julia 1 of Traben-Trabach, is overwhelmed by the speeches of praise during her farewell ceremony. (Peter Jaeger / S&S) 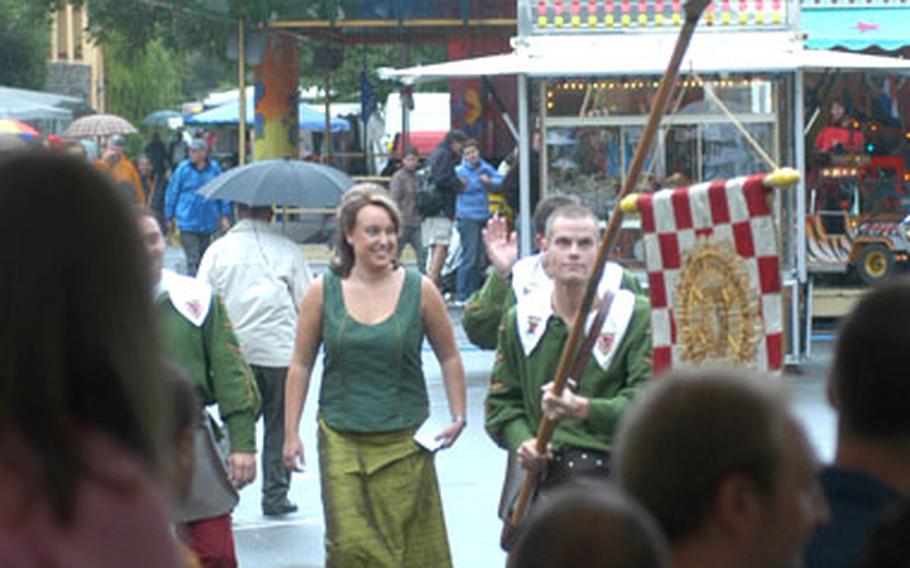 The new wine queen is escorted into the festival tent by a man hoisting the flag of the wine guild. (Peter Jaeger / S&S)

She attended more than 30 events during her reign, made many speeches and raised her glass countless times to salute locals, tourists, officials and friends she made performing her official duties.

One of her highlights was her last day in office. It was her special day, both glorious and a little sad. The ceremony that July afternoon on the banks of the Moselle River was emotional and moving, especially for Queen Julia I.

&#8220;Everyone must have loved her open and hearty personality,&#8221; master of ceremony Gerhard Bretz said in his farewell speech.

Everyone on stage kissed her goodbye. Everyone, one after another, presented her with a red rose and a sympathetic farewell speech accompanied by musical fanfares from a band.

There were many wet eyes among the other wine queens, who came from nearby towns to wish her well. And Julia shed a few tears herself, letting them fall into her oversized Riesling wine glass.

The ceremony was conducted by the Stadtschr&#246;ter of Traben- Trabach. This old, traditional guild is the only one of its type still conducting a wine festival, always on the last weekend in July &#8212; July 25-28 this year.

Members of the guild, formed in 1649, were in charge of moving heavy barrels full of Riesling wine out of the cool caves where they were stored, onto wagons and then onto ships on the Moselle. When wine pumps were invented in the 19th century, their trade became obsolete.

But the Stadtschr&#246;ter stayed active as a guild, preserving its tradition and customs. One of them is selecting and crowning the wine queen of Traben-Trabach every year.

On this Sunday in July, they gathered with others from the town to say farewell to Julia I and to crown her successor for the current year, Cora I, a student selected to be queen by Bretz, guildmaster of the Stadtschr&#246;ter.

She hopes that, when her time is up, she will get the same type of emotional farewell Julia received. Those present can only wish her luck with a traditional toast: &#8220;Prost, to your health.&#8221;