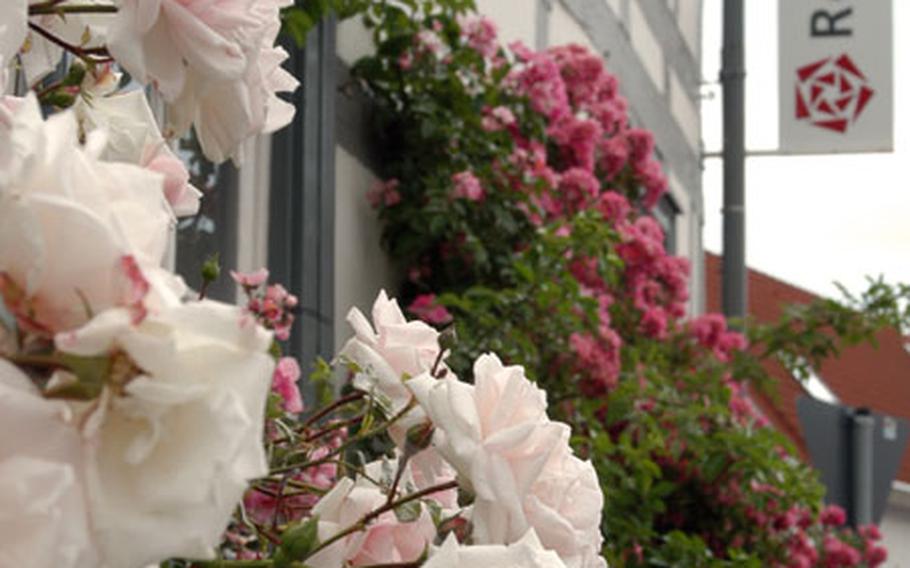 There are roses everywhere in Steinfurth, a suburb of Bad Nauheim, considered by many as the rose-growing capital of Germany, and appropriately there are some clinging to the wall of the Rosenmuseum. (Michael Abrams / S&S)

There are roses everywhere in Steinfurth, a suburb of Bad Nauheim, considered by many as the rose-growing capital of Germany, and appropriately there are some clinging to the wall of the Rosenmuseum. (Michael Abrams / S&S) 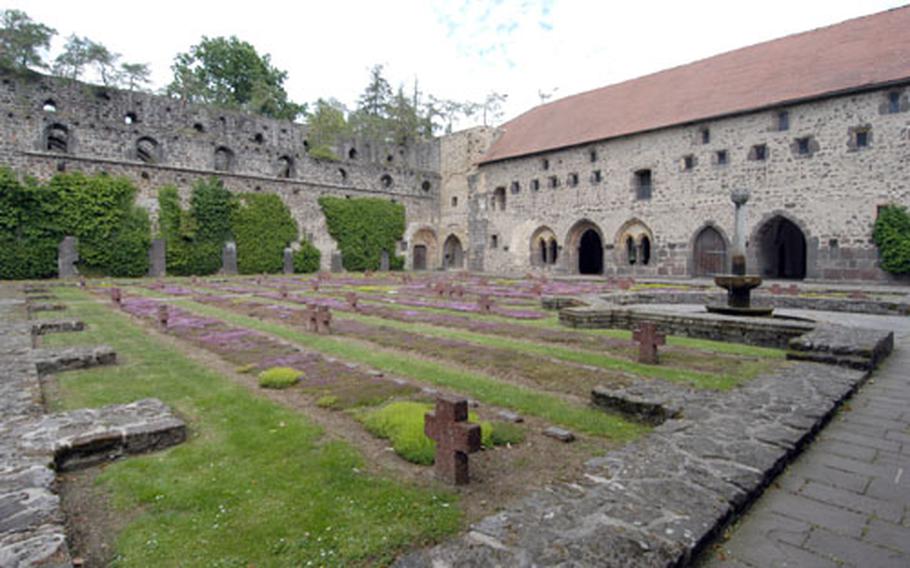 In Kloster Arnsberg is a World War II cemetery with 447 graves of German soldiers, prisoners of war and forced laborers, including the remains of 87 men and women murdered by the SS shortly before the Americans arrived on March 26, 1945. (Michael Abrams / S&S) 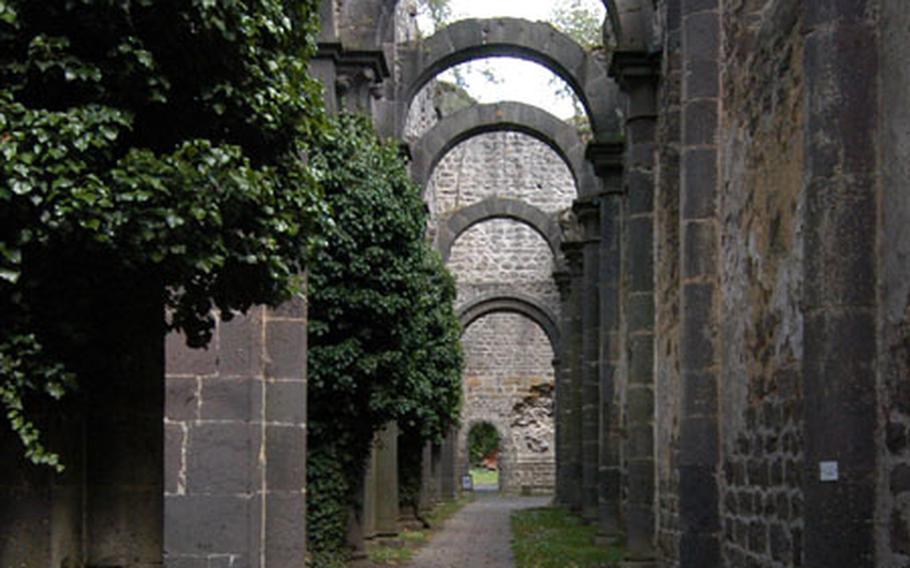 An isle of the monastery church, now in ruins, at Kloster Arnsburg. (Michael Abrams / S&S) 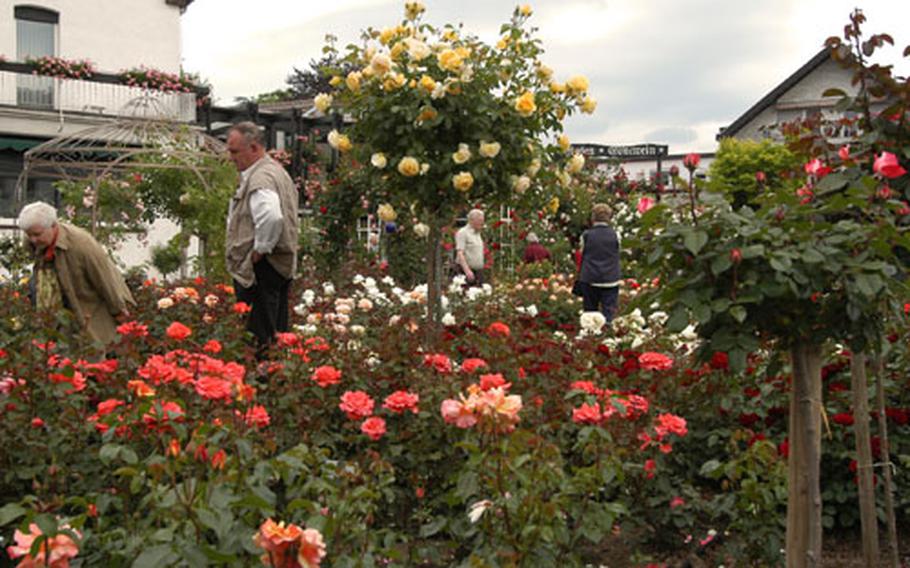 Prospective buyers check out a huge selection of roses at a Steinfurth, Germany rose farmer&#39;s shop. Steinfurth is known as the rose-growing capital of Germany, with about 30 companies growing 4 million plants annually, down from 1970 when 210 companies grew 14 million roses. (Michael Abrams / S&S) 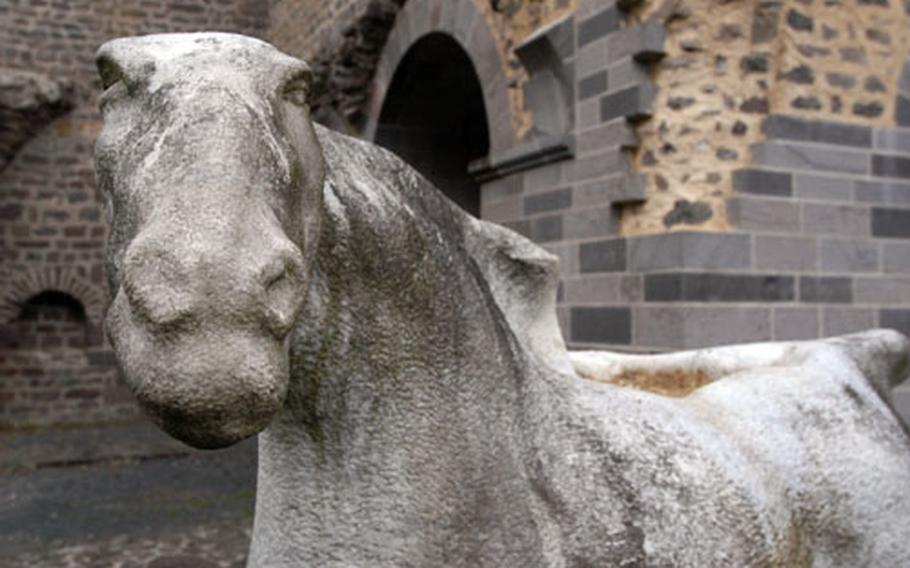 This rather strange statue of a horse stands behind the ruins of the monastery church at Kloster Arnsberg. The monastery&#39;s rebuilt dormitory is regularly used for art exhibits. (Michael Abrams / S&S)

The Wetterau is a region of fertile German hills and vales that stretches roughly from Butzbach in the northwest to B&#252;dingen in the southeast.

Castles, monasteries and villages with half-timbered houses dot the countryside. It is known for apple orchards and apple wine. It is a place for invigorating bike rides or lazy day trips by car.

On a recent jaunt, we visited the northwest corner of the Wetterau, stopping at a village famous for its roses, an imposing castle and a former monastery better known today for its culinary delights than its religious heritage.

On a breezy day, you can smell Steinfurth before you can see it. Actually you smell what the town, a suburb of Bad Nauheim, is famous for: roses.

Lack of demand for roses and hot competition pared down the number of producers throughout the years.

Rosebushes line the road as you enter Steinfurth. From then, until you leave the town, the roses will be your constant companions. Roses grow in gardens and decorate buildings. There is a rose museum &#8212; the Rosenmuseum &#8212; and on even years, Steinfurth hosts the Rosenfest, with a rose queen and a parade, on the third weekend of July.

The story of roses and Steinfurth begins in 1868 when a local lad, Heinrich Schultheis, returned from a rose-grower&#8217;s apprenticeship in England and founded the first German rose nursery. In 1880 he produced the first catalog for buyers, and two years later, a Schultheis Brothers rose catalog appeared in the United States. A copy is on display at the Rosenmuseum.

By the turn of the century there were 50 rose farmers in Steinfurth. The first Rosenfest took place in 1949 and the first queen was crowned the next year.

The sheer volume of roses can be overwhelming. Roses bloom in red, white, yellow, pink and orange. There are rose bushes, climbing roses and potted roses. Some with tiny blooms, some with giant ones. Some inexpensive, some very expensive. One thing is for sure: It&#8217;s a rose lover&#8217;s dream town.

The Rosenmuseum is only interesting if you speak German, since all the exhibits are in German. On display are things with roses on them, such as cups, plates, wallpaper, books, etc. There is one room dedicated to the history of rose growing in Steinfurth and another on how roses are grown. You can buy rose souvenirs at the museum, and it also has a caf&#233;.

The road from Steinfurth to M&#252;nzenberg leads through Rockenberg, with its nunnery, now a prison for juvenile delinquents.

M&#252;nzenberg castle, standing high on a hill above the village, can be seen from miles away. It is nicknamed the &#8220;Inkwells of the Wetterau,&#8221; and it is easy to see why. Its two tall, round towers poke into the sky like giant inkwells.

The castle dates to the middle of the 12th century and was built by Kuno I von Hagen-Arnsburg, who named himself Kuno I von M&#252;nzenberg in 1156. It has an outer wall surrounding the bailey &#8212; the outer wall or court &#8212; with an inner wall protecting the courtyard and living buildings. You have to pass through three gates to enter the castle proper. This is the oldest part of the castle, with the outer walls built later to strengthen the defenses. The two &#8220;inkwells,&#8221; the west keep and east keep, give a view of the surrounding land.

The Falkensteins built the northern residential building, known as the Falkensteinerbau, at the end of the 13th century. It is bigger but less decorative than the Romanesque structure.

In 1418, the last Falkenstein died and in 1628 the castle was shot to ruins during the Thirty Years War.

Today, you can stroll along the castle walls, and climb the 145 steps to the top of the east keep for a great view of the Wetterau, the Taunus Mountains and the castle and village below. At least once a year, usually in June, a medieval festival takes place here, and in the summer concerts are held.

The restaurant Zur Burg (and its beer garden), at the end of the road leading up to the castle, is popular with tourists and locals alike. The town of M&#252;nzenberg has an interesting half-timbered town hall on the market place.

Another example of half-timbered architecture can be found in the suburb of Trais-M&#252;nzen- berg, on the road to Kloster Arnsburg. On R&#246;merstrasse are some of the best examples of half-timbered farmhouses with high wood gates in the Wetterau.

The area around Kloster Arnsburg has been settled for a long time. Traces of the Bronze Age Urnfield Culture have been found here, including a large pot on display at the monastery.

The Romans built a fort nearby in the first century, and later, in the ninth and 11th centuries, two medieval castles were built here. Traces of the latter can still be seen.

In 1174, 12 Cistercian monks founded the Arnsburg monastery. Throughout the centuries as many as 200 monks lived there, and as few as 10. The monastery&#8217;s holdings in land also expanded and contracted over the years.

The Peasants&#8217; War, the Reformation and the Thirty Years War also brought the monks hard times. But in the 18th century, Kloster Arnsburg had a second heyday when many structures were added, including the Baroque gate building at the entrance to the monastery grounds. In 1803, it was secularized, and the monastery and its belongings were given to the counts of Solms-Laubach.

After passing through the gate, you are in the large expanse of the monastery grounds. Directly ahead is the old monastery with the ruins of its church. Pass through its gate and you enter the cloister, now a World War II cemetery with 447 graves of German soldiers, prisoners of war and forced laborers, including the remains of 87 men and women murdered by the SS shortly before the Americans arrived on March 26, 1945.

There is not much left of the Romanesque monastery church. Built in the 12th and 13th centuries, it fell into ruin after the secularization. With a length of 280 feet, it must have been quiet impressive once.

On the monastery grounds are numerous other buildings. One of them, the old mill house, is now a hotel and restaurant. The Alte Klosterm&#252;hle is known far and wide for its excellent cuisine, with specialties from the region. It is not cheap, with entrees between 15 and 26 euros, but if you can afford it, it is the perfect place to cap off a day in the Wetterau.

Reaching this part of the Wetterau is easy.

From the south, exit Autobahn 5 at the Bad Nauheim exit, then follow the signs to Steinfurth, M&#252;nzenberg and Kloster Arnsburg on the back roads.

From Giessen, exit Autobahn 45 at the M&#252;nzenberg exit, and then take Highway 488 toward Lich. Watch for the turn for Kloster Arnsburg a couple of miles before Lich. Or follow the signs to M&#252;nzenberg and start the day at the castle.

From Hanau, take Autobahn 45 toward Giessen/Dortmund, exit at M&#252;nzenberg, and do the same as above.

Now is a good time because the roses are in bloom, but spring, summer and fall are fine. In winter, the castle and monastery are closed and the fields are bare.

The Rosenmuseum in Steinfurth is open 10 a.m. to 5 p.m. Wednesday through Saturday from May to October and 2 to 5 p.m. from November to April; Sunday hours are 10 a.m. to 5 p.m. Admission is 3 euros for adults and 2 for children.

The Steinfurther Rosenfest takes place July 16-19. There is a rose show where new and unique hybrids are on display in the Rosensaal (Rose Hall). It opens July 16 at 4:40 p.m., and at 8 a.m. the following three days. The Rosenkorso parade is Sunday at 2 p.m. The rest is your traditional German fest with drinks, foods and rides.

M&#252;nzenberg castle opens daily at 10 a.m. from February to November and closes between 4 and 7 p.m., depending on the time of year. Admission is 1.80 euros for adults and 1.30 euros for children 14 and younger.

Kloster Arnsburg is open daily during the daylight hours, but might be closed during the winter due to snow and ice. Admission is 1 euro, which you pay at the turnstile at the entrance, so be sure to have coins with you.

These Web sites are in German only: