Gdansk, Poland: 'Jewel of the Baltics' lends itself to exploring on foot 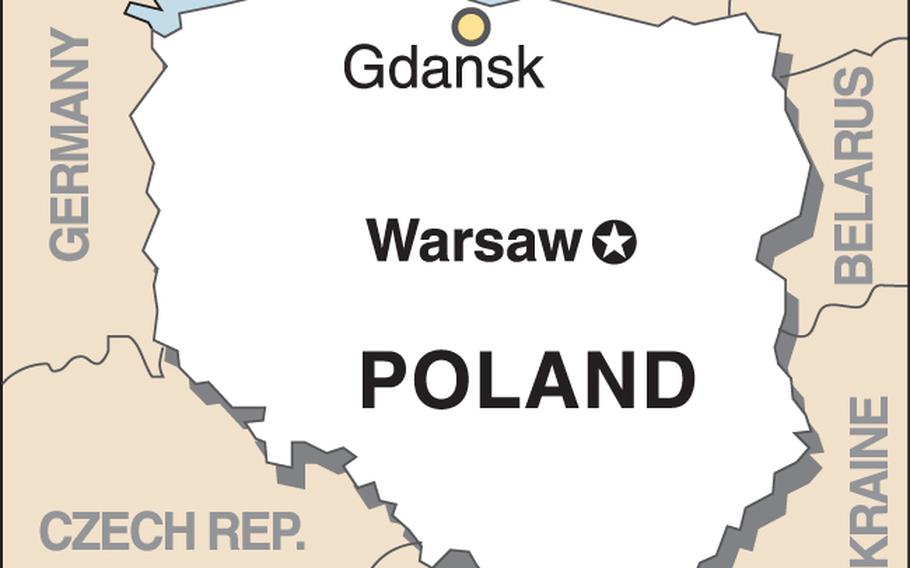 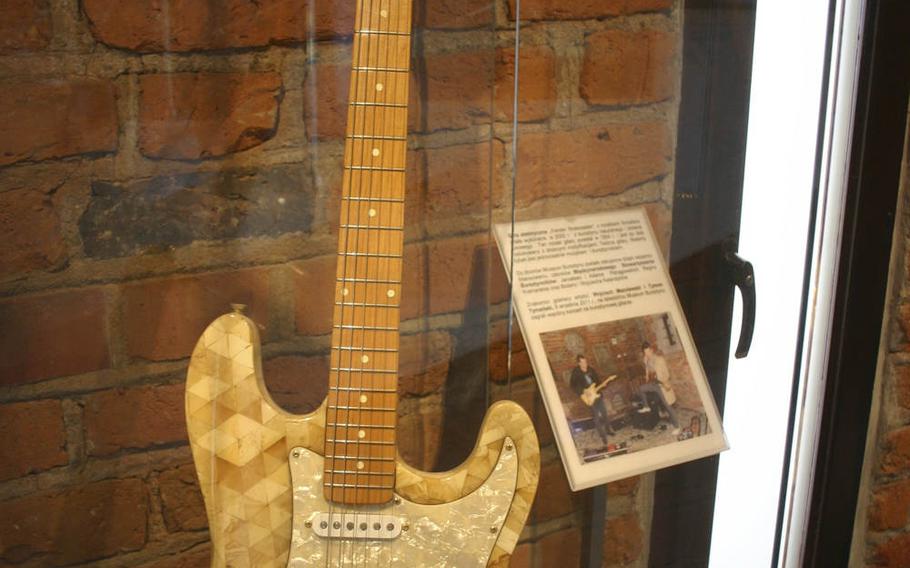 A guitar made of amber is showcased at the Amber Museum in Gdansk, Poland. Gdansk is known as the "world capital of amber," and the museum features an extensive collection of beautiful jewelry and artwork made of the gem. (Peggy Sijswerda/Special to Stars and Stripes) 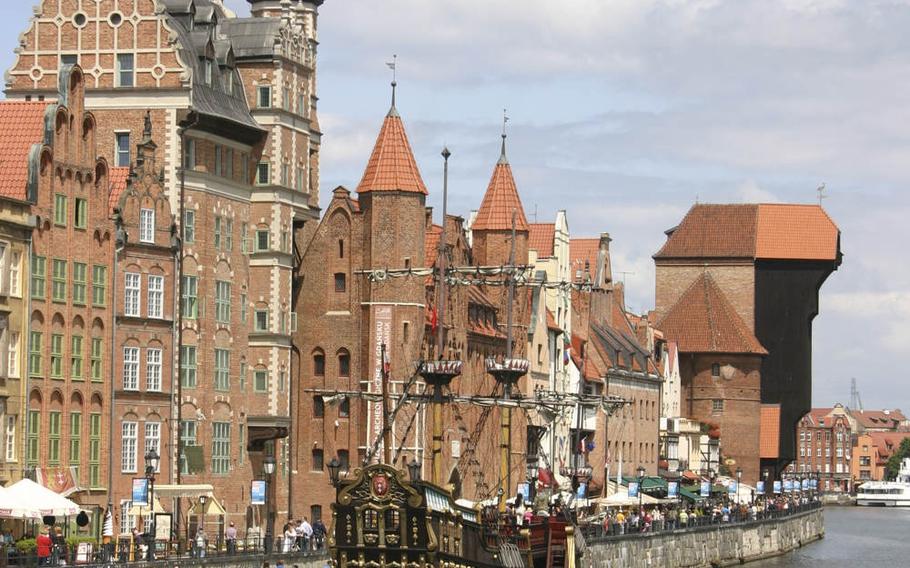 The picturesque waterfront of Gdansk, Poland, is a magnet not only for tourists but for local residents, with its cozy cafes and colorful architecture. (Peggy Sijswerda/Special to Stars and Stripes) 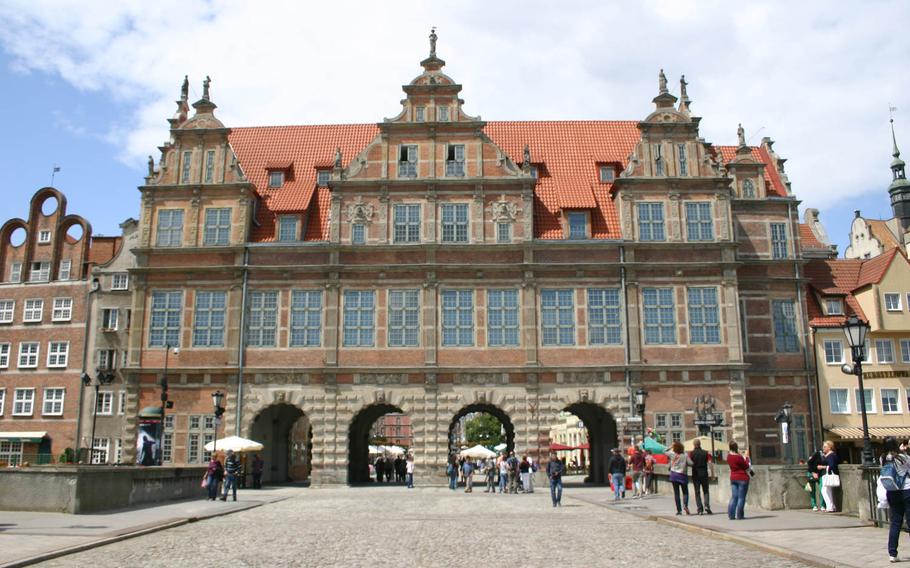 Gdansk, Poland's, magnificent Green Gate, built in the 16th century, was built as a residence for royalty. (Peggy Sijswerda/Special to Stars and Stripes) 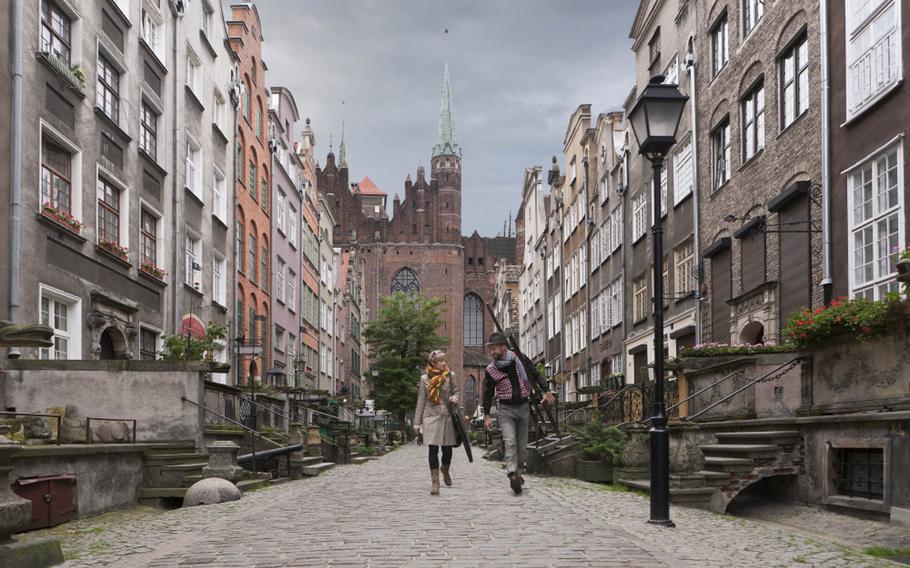 Artists walk down one of Gdansk, Poland's most beautiful thoroughfares, Mariacka Street, a secluded lane with a charming atmosphere. (Courtesy City Hall of Gdansk ) 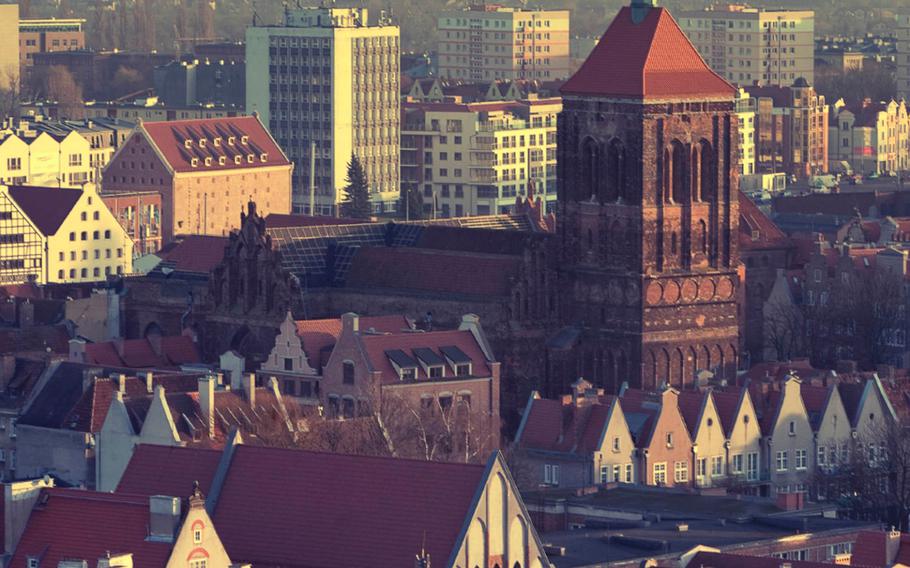 The Old Town skyline in Gdansk, Poland, provides a stark contrast to the city's modern high-rise buildings in the background. (Courtesy City Hall of Gdansk )

Some European cities are impossible to navigate without a car or public transportation, but Gdansk, Poland’s, Old Town is just right for exploring on foot. Everything from historical and cultural attractions to shopping and dining is close by. Its compact size also makes it ideal for a weekend getaway.

Recently my husband, son and I spent a couple of days wandering the streets of Gdansk, known as the “Jewel of the Baltic.” The city is postcard pretty with its fountains, river walk and lively street scene.

We began at the 16th-century Wyzynna Gate, the entrance to Old Town and the start of the “royal route.” The Polish king would have taken this route when he visited the city to collect tax revenues. Today, the gate serves as a tourist information office.

After we passed through the gate, our first stop was the Executioner’s House and Prison Tower, also built in the 16th century. Currently the tower houses the Amber Museum, part of the Gdansk History Museum.

Gdansk is known as the “world capital of amber” — the “gold of the north” — and the museum features an extensive collection of jewelry and objets d’art. Our son was impressed by the Fender Stratocaster guitar made of amber, and my husband and I loved the golden amber lamps. Be warned: The exhibits are displayed on multiple floors inside the tower, and stairs connecting them are narrow and steep.

A few steps away, the Golden Gate marks the entrance to the city’s main square, known as Long Market. This is where the city’s heart beats. The square is lined with stately homes and buildings, many painted in pastel shades and representing different periods of history and architectural styles. Some are open to the public, such as Artus Court, an impressive 14th-century mansion that served as a symbol of the city’s power as well as a meeting place for wealthy craftsmen.

Just across the square, the Gdansk Main Town Hall dominates the skyline. Rebuilt after its destruction in World War II, it now houses the Gdansk History Museum, filled with lushly painted ceilings and colorful frescoes. There are also artifacts and exhibits of the city’s history, including somber black-and-white photos depicting the bombed-out city after WWII. In addition to historical exhibits, the Town Hall is famous for its 37 concert bells, which chime hourly from its tower.

We took a break on a sunny terrace to enjoy coffee and soak up the Old Town’s beautiful ambiance. A centerpiece of Long Market is Neptune’s Fountain, with its imposing statue of King Neptune. Erected in 1549, the statue was removed and hidden, along with other treasures, during WWII. Today, the regal statue, trident in hand, is a proud symbol of Gdansk’s seafaring role throughout the centuries.

To learn more about the city’s maritime heritage, we made our way through the Green Gate, a magnificent four-arched gatehouse at the end of Long Market, and across a short bridge to Olowianka Island, to the Polish Maritime Museum. The museum is made up of a complex of four museums on both sides of the Motlawa River.

We began at the Granaries, former warehouses now containing exhibits of maritime paintings, Polish explorers, underwater archaeology and much more. Tied to the dock is the Soldek, a Polish steamship built in Gdansk and now a museum.

We hopped on a ferry to cross back over the river — a five-minute ride — to the family-friendly Maritime Cultural Center, with five floors of interactive exhibits. Nearby is the Old Crane, built in the 15th century and once the biggest working crane in the world.

Continuing our walking tour, we found one of the city’s most beautiful streets, Mariacka Street, a secluded lane with a charming, romantic atmosphere. Lining the street are ornate narrow houses once owned by wealthy merchants and artisans, embellished with front stone terraces, many decorated with gargoyles, lions, dragons and sea monsters. Today, jewelry shops dominate the street, selling amber jewelry, of course!

One of our favorite finds was a local hangout just off the main square called Pijalnia Wodki i Piwa, which roughly translates to “the drinking room.” Don’t worry, it’s not a dive bar. In fact, it looks similar to a soda shop with bar stools, Formica counters and servers wearing white aprons and red bow ties. Open 24 hours a day, this venue is popular with young adults — thanks to its low prices. We sampled some Polish snack food — soup and sausage — washed it down with tasty Polish beer and chatted with local townsfolk, who were friendly and welcoming.

Two days in this attractive city wasn’t nearly enough. Besides visiting tourist attractions, there’s something to be said for simply soaking up Gdansk’s charms. Walking along the riverfront, relaxing on a sunny terrace and listening to the bells ring from the Town Hall tower are just as important activities as learning about a city’s heritage. We look forward to a more leisurely visit next time!

Gdansk, Poland Getting there Lufthansa, LOT Polish Airlines and SAS Airlines are major carriers flying into Gdansk. Budget airline RyanAir flies to Gdansk from airports in the United Kingdom and Italy.

Costs A Gdansk tourist card includes free admission to most tourist attractions and discounts for hotels, restaurants and shops. The 24-hour pass is 9 euros and the 72-hour pass is 11.50 euros. You can also buy a 72-hour sightseeing and transportation card for 21 euros. Our soup-and-sausage snack at the Pijalnia Wodki i Piwa was 2 euros each.

Accommodation • The Radisson Blu, Hotel Gdansk is a block from Long Market, walking distance to most attractions. Rooms are comfortable and start at $100 a night; www.radissonblu.com/hotel-gdansk.

• Hotel Gdansk overlooks a marina next to the Polish Maritime Museum on Olowianka Island. A four-star property, it features a charming restaurant, microbrewery, spa and well-appointed rooms starting at $150 a night.

• Tabun, an idyllic farm about 15 minutes from the city center, is a great choice if you have a car. Perfect for families, Tabun is next to a wooded nature area and has five guest rooms and an apartment. Guided horseback and pony rides are offered. My family enjoyed sitting around the fire pit each evening, chatting with other guests. There’s also a restaurant serving delicious, home-cooked Polish fare. A double room runs about $55 per night; www.tabun.kuznia.net.