Jason Brock, a civilian Department of Defense employee who lives in Grafenwöhr, Germany, paraglides with an instructor on his back. They jumped from a peak more than 3,000 feet high. Paragliding is one of the main attractions for outdoor enthusiasts in Garmisch, but the weather does not always cooperate. (Russ Rizzo / S&S)

Jason Brock, a civilian Department of Defense employee who lives in Grafenwöhr, Germany, paraglides with an instructor on his back. They jumped from a peak more than 3,000 feet high. Paragliding is one of the main attractions for outdoor enthusiasts in Garmisch, but the weather does not always cooperate. (Russ Rizzo / S&S) 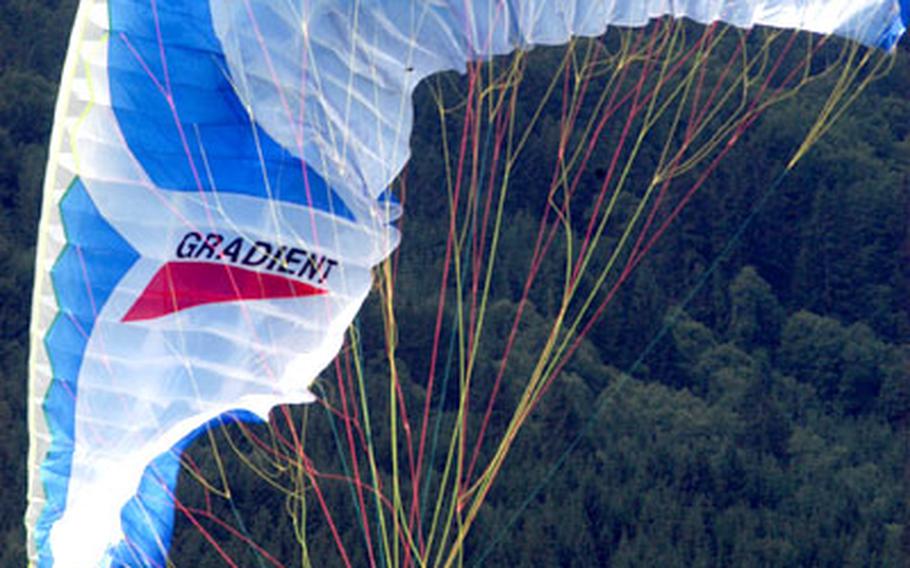 Jason Brock gets his feet back on terra firma after a paragliding with an instructor in Garmisch. (Russ Rizzo / S&S) Garmisch and surrounding cities can be seen from the “halfway house” along the hike up Kramer Mountain. (Russ Rizzo / S&S) 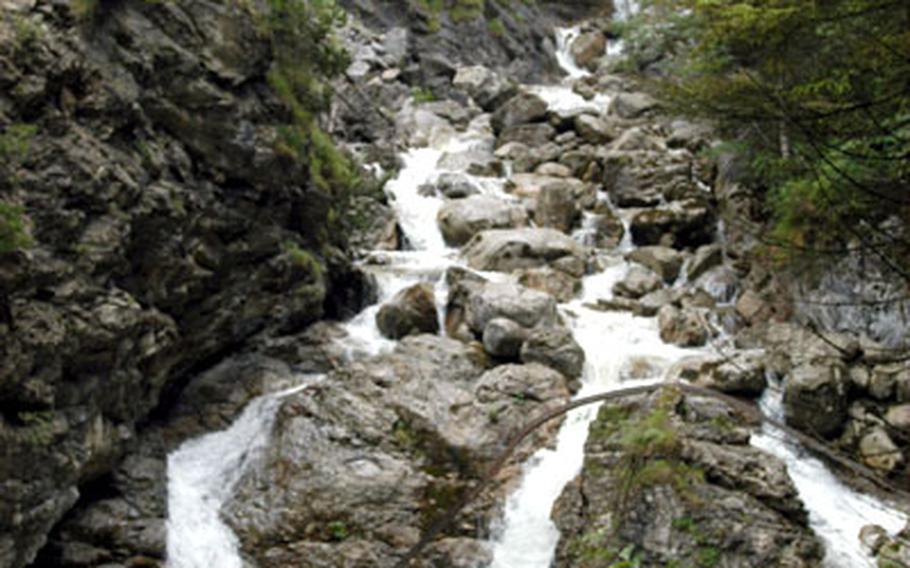 The Flying Cow trail just outside of Garmisch, Germany, offers views of waterfalls for a lot less work than braving one of the nearby gorges. (Russ Rizzo / S&S) 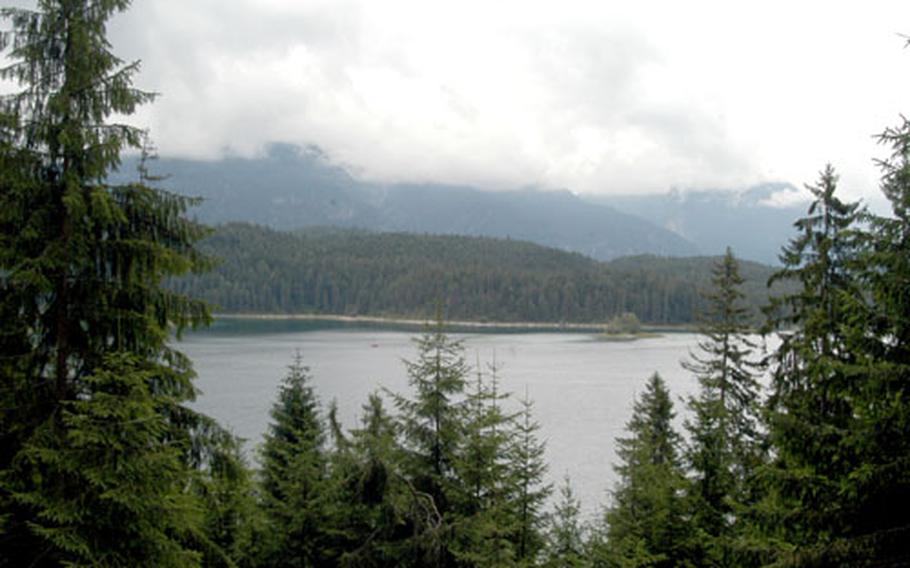 The Eibsee lake, just outside of Garmisch, offers the area’s best swimming, plus hiking and biking trails. (Russ Rizzo / S&S)

Your heart thumps against your rib cage as you look at the ground 5,000 feet below and begin running toward the edge of the mountain. At first, the parachute holds you back and you are running in place. Then you gain traction and take the leap.

And, suddenly, it has begun.

You are floating in air, weightless with a view of what seems to be all of Germany. Houses below are mere specs. Birds are your brethren.

Then the instructor behind you makes a corkscrew turn that gives your heart a jolt. He tours you around the open valley for unforgettable panoramic views.

Minutes later you are a ground-dwelling human again, but your adrenaline rushes on.

At least that&rsquo;s how one Army civilian explained paragliding to me. Unfortunately, the wind picked up before my turn, leaving me grounded. The rain the next day didn&rsquo;t help, either.

I was in Garmisch, Germany, on a recent weekend staying in the Armed Forces Recreation Center&rsquo;s Edelweiss Lodge and Resort (Map). Once I sifted through the hotel&rsquo;s family-oriented suggestions of things to do &mdash; such as flat-water rafting and group hikes with no risk of falling to a spectacular death &mdash; I found Garmisch has a lot to offer thrill-seekers who are willing to sweat a bit.

Paragliding is the best bet for getting the endorphins pumping. No weekend warrior worth his salt can pass up a chance to report back to his buddies that he jumped off a mountain. Unless, of course, he jumps from planes for a living.

But that bragging right does come with a price.

The Edelweiss staff connects its guests with a local paragliding school that charges $85 for a tandem jump that lasts about 20 minutes. Serious sky junkies can also sign up for a four-day course for $300 to earn a basic jumping license. Those with a basic license can graduate to the advanced course.

For those who prefer to stay connected to earth, white-water rafting is a short car ride away, over the Austrian border.

For $50, an outfit recommended by the folks at Edelweiss called Feel Free, offers a morning ride on relatively tame waters along the Inn River with mostly Class III and some Class IV rapids. The company&rsquo;s full-day trip graduates to more aggressive waters with mostly Class IV rapids on the Oetz River in the afternoon for $110. Disappointingly for experienced rafters, though, nobody can jump straight to the advanced section.

Rock-climbers can find plenty of challenges in the area. The Edelweiss takes guests to the base of Kramer Mountain for terrain fit for beginners up to more advanced climbers.

For the experienced rock jock, a better bet is connecting with Alpine World &mdash; &ldquo;Alpinwelt&rdquo; &mdash; at the base of the town&rsquo;s main gondolas. The company offers guided rock-climbing trips at the Alpswitze peak, more than 6,500 feet high, for adventure with a view.

Serious adventure-seekers would be wise to stop by Alpine World to speak with people like Simone Holland, a Garmisch native who works there and uses the surrounding mountains as a personal playground.

For hard-core hikers, Holland suggests a two-day hike up the Zugspitze, Germany&rsquo;s highest mountain, with an elevation of 9,700 feet.

&ldquo;You shouldn&rsquo;t be scared of heights,&rdquo; Holland warns of the hike, which contains some precarious traverses over bridges and requires mountaineering equipment to reach to top.

Holland recommends starting in nearby Hammersbach and hiking through the beautiful Hollental Gorge. A guide is recommended, she said, and hikers will need spikes on their boots to walk across snow banks.

Also rewarding is the easier one-day hike up the Zugspitze starting at the &ldquo;Ski Stadium&rdquo; and traveling through the gorge of the Partnachklamm River, Holland says. She suggests that hikers spend the night at one of two huts near the top. A cable car carries less-eager hikers to the bottom.

For mountain bikers, the scenic Eibsee lake offers a good starting point to some serious inclines. The uphill ride to Eibsee from Garmisch is a decent challenge in itself, while the easy loop around the lake is a nice reward after steep climbs.

The mountains around the Edelweiss Lodge are filled with bike paths with steep grades, so it should be easy to find something that meets your abilities.

For a relaxing walk to recover from the toll of a long bike ride or hike, locals suggest checking out the Flying Cow trail starting in nearby Partenkirchen, a short car ride from the Edelweiss.

The flattest trail along a river includes an unusual outdoor spa experience. Hikers can take off their shoes and walk on different types of pine cones, bark chips and rocks meant to massage tired feet. After that, they can dip their feet or arms into ice-cold pools of water designed to increase circulation.

I chose the pool for feet and found myself more relaxed after the numbness wore off.