Freizeit-Land Geiselwind: Young and old can find a thrill at Bavarian park 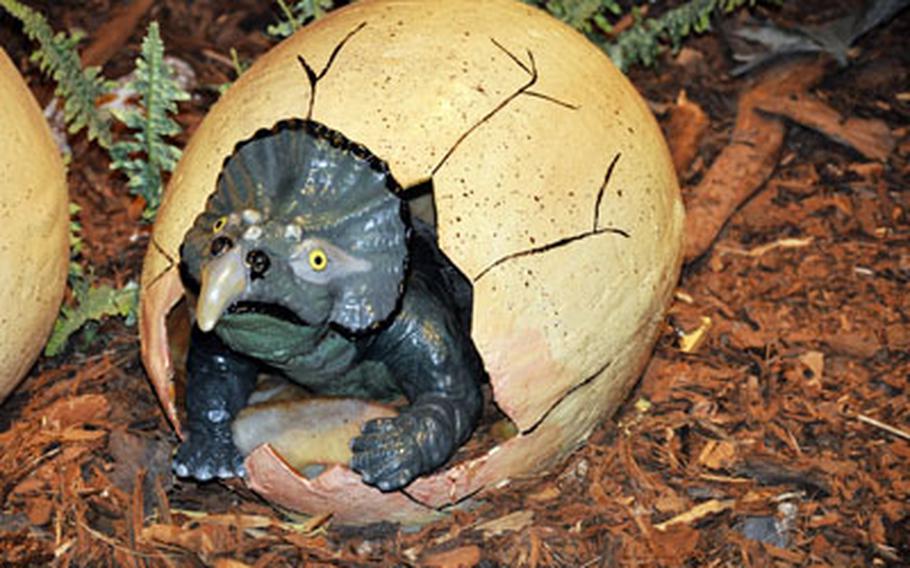 Buy Photo
A dinosaur “hatches” at the park’s Jurassic exhibit. (Photos by Dan Blottenberger/Stars and Stripes)

Buy Photo
A dinosaur “hatches” at the park’s Jurassic exhibit. (Photos by Dan Blottenberger/Stars and Stripes) 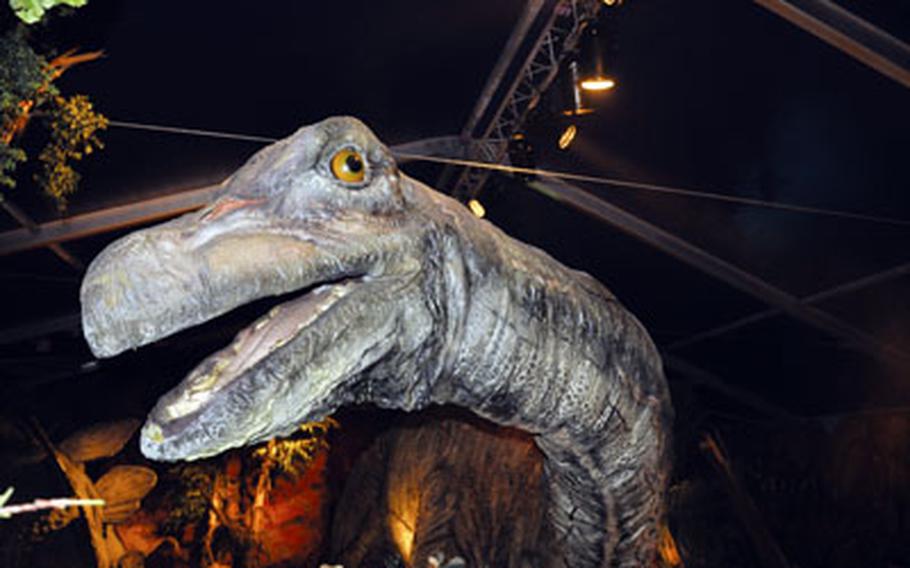 Some young children have found this fellow scary enough to run from. Watch out for his look-alike outside the exhibit; he spits water at visitors when they least expect it. () 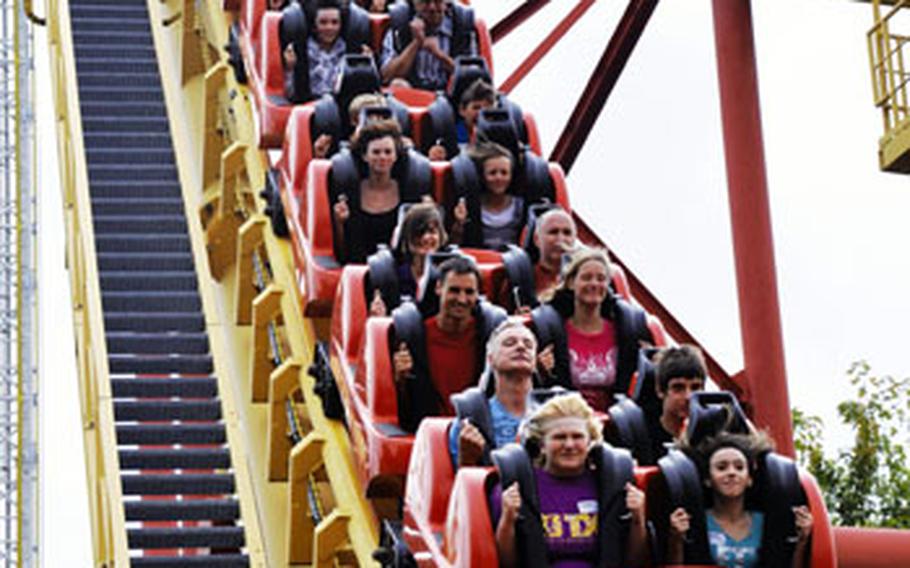 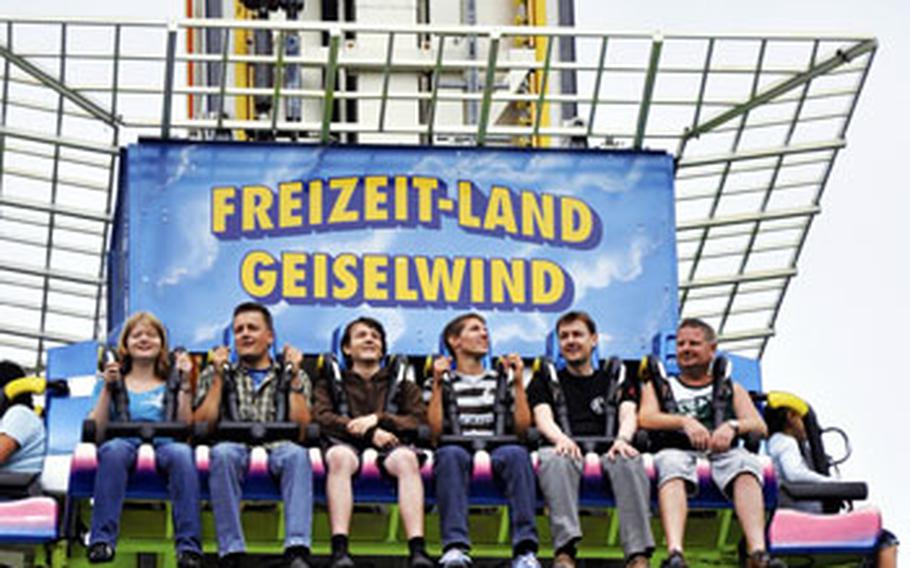 The Shot and Drop at Germany’s Freizeit-Land Geiselwind shoots riders into the sky without warning before dropping them back down once they reach the tower’s peak. ()

Something told me when I was twirling around some 320 feet in the air with Tom Petty&rsquo;s "Learning to Fly" playing in the background that, despite the rain clouds looming over head, I was in for an adventure.

I was aboard an amusement park ride called On Top of the World at Freizeit-Land Geiselwind, looking down at "Bavaria&rsquo;s leading amusement park." The tour I got of the park from my seat was a preview of what I was about to embark on: a day of fun-filled adventure for all ages.

Relaxing, however was not what I was there to do. I was there to challenge my youth and to see if I could hold down my breakfast long enough to try all the amusement rides the park had to offer.

The first challenge was the Shot and Drop and the name says it all. First, riders get launched into the air without warning at a speed that can only be described as really fast. Riders end up on top of a tower, looking over the entire park. You&rsquo;re left checking your chest to see if your heart is still there or somewhere in your intestines.

After a couple more quick descents and launches back into the sky, you return safely to the ground ready for the next ride.

And there are plenty that are exciting for the adventurous adult or the brave child.

The ride that attracted the most park visitors was the Boomerang, a traditional two-loop, upside down, frontward and backward roller coaster. It is not the park&rsquo;s only coaster, but it is by far the biggest and fastest. There were about three smaller coasters around the park, but nothing like the Boomerang, which, because of the rainy weather, was the only ride I had to wait in line for.

If you&rsquo;re in for a real thriller, you can venture onto the Shuttle, where your lunch will get shuttled back and forth from your head to your feet. Riders travel in a circle, slowly swaying as if they&rsquo;re on a space ship and sometimes hanging upside down for what can feel like an eternity, losing any loose change they may have in their pockets.

If you aren&rsquo;t one for extreme rides &mdash; or if you are with smaller children &mdash;there are plenty of low-key rides and tons of rare birds, farm animals and even monkeys at the park zoo. Dogs are allowed in the park but make sure you don&rsquo;t take them into the zoo. In parts of the zoo, animals run free among the guests.

Two other interesting features at the park were the Jurassic exhibit, with dinosaurs that look real enough to have two children screaming and running for their lives, and the "4-D" movie ride, which has you sitting in moving chairs as you watch a short film in 3-D.

With all the features available and the minimal waiting lines, the park is worth the trip for anyone looking for a day of adventure or entertainment for the kids.

From Bamberg, take B22 until it meets B505 and head toward W&uuml;rzburg. Stay on the road for about 15 miles until you reach Autobahn 3. Take A3 toward W&uuml;rzburg for about 16 miles until you reach Exit 76, Geiselwind. At the T-junction, turn right and at the next T-junction turn left. Then follow signs for the park through the small town until you come to the park on your right. Parking is free.

Park times vary throughout the year, but they are basically 9 a.m. to 6 p.m. It begins reduced hours Sept. 14, including midweek closures. For a list of opening times, see the park&rsquo;s Web site, www.freizeitlandgeiselwind.de (it has an English version), click on Opening Times and then scroll down to &Ouml;ffnungszeiten to view a calendar with opening hours.

Admission is according to height and covers all rides and shows. If you are under 1.10 meters (about 3-foot-6), admission is free; if you are between 1.10 and 1.40 meters (about 4-foot-8), you pay 19.50 euros; adults and those taller than 1.40 meters pay 22.50 euros. Children with IDs get in free on their birthdays. Discounts for groups and seniors are available.

The usual amusement park offerings from cr&ecirc;pes to schnitzel and fries are available. And, of course, there is a beer garden.

There is an English-language page at www.freizeitlandgeiselwind.de full of useful information. All written information at the park, except for a few of the rides&rsquo; names, is in German, but most of the people who work there speak English.