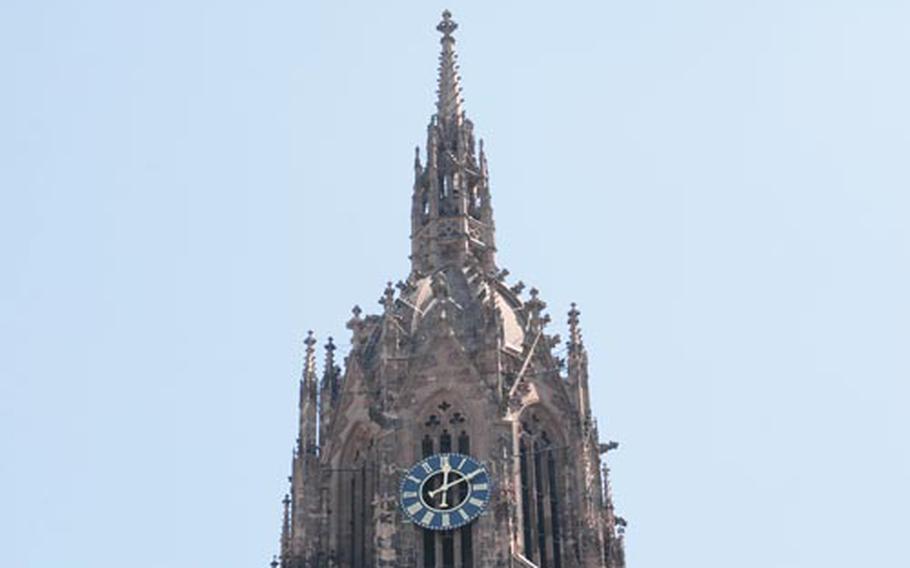 Dom Cathedral or St. Bartholomeus’ Cathedral in Frankfurt was the site where kings from the Holy Roman Empire were elected and later where the emperors were crowned. Today the cathedral is still in use as a house of warship and it has endured a fire and bombing during World War II. (Mark Abramson / S&S)

Dom Cathedral or St. Bartholomeus’ Cathedral in Frankfurt was the site where kings from the Holy Roman Empire were elected and later where the emperors were crowned. Today the cathedral is still in use as a house of warship and it has endured a fire and bombing during World War II. (Mark Abramson / S&S) Dom Cathedral or St. Bartholomeus’ Cathedral is free to the public, and unlike some other noteworthy European cathedrals, it is brightly lit inside. (Mark Abramson / S&S)

The majestic sandstone tower that stands out along Frankfurt&rsquo;s skyline along the Main River is as rich in history as it is in beauty.

That scenic structure, the Dom, or St. Bartholoma&uuml;s&rsquo; Cathedral, according to one German Web site was built in the 14th and 15th centuries on the foundation of an earlier church. From 1356 on, it is where the kings of the Holy Roman Empire were elected and where the Holy Roman Emperor was crowned from 1562 to 1792.

Information pamphlets in English and other languages indicated that unlike other cathedrals, it was never a bishop&rsquo;s throne. But it was given that prestigious title in the 16th century because of its historical significance.

The cathedral has also been ravaged throughout its history, notably by a fire in 1867 and Allied bombing during World War II. A few photos inside show it with its roof damaged by war and the nearby buildings leveled from the bombing. It was rebuilt by 1953.

Admission to the cathedral itself is free. For a small price, visitors can get a better glimpse of its history by touring a small museum inside and another one cater-corner from the cathedral&rsquo;s entrance.

Both museums are filled with artifacts dating as far back as the 15th century. There are golden chalices, ornate candelabras, robes worn by officiating clergy, centuries-old books and other pieces from its past. Services are still performed in the Dom, at which time the cathedral itself is closed to tourists.

The cathedral, unlike other houses of worship in Europe, is well-lit inside with chandeliers throughout. And although it has arcing ceilings similar to Notre Dame in Paris, the Strasbourg Cathedral and other well-known European houses of God, the Dom&rsquo;s red sandstone gives it a brighter feeling than the other cathedrals.

On a Tuesday afternoon, the cathedral was filled with school children, tourists and people taking a load off and lounging around in its pews.

For travelers looking for something to do after visiting the cathedral and two museums, the area is bustling with activity and there are plenty of places to eat and shop, plus you&rsquo;ll often find live entertainment in one of the nearby squares. Picturesque R&ouml;merberg Square is also close by at Braubachstrasse and R&ouml;merberg.

On the QTFind the cathedral at Domplatz 14, Frankfurt, Germany.

CostsEntrance to the cathedral museum is 3 euros for adults 19 and older and 2 euros for children 18 and younger. Guided tours cost 45 euros. Garage and street parking at various prices is available near the cathedral.

FoodThere is a variety of food available nearby, from Italian to German and American fast food, such as Subway, Burger King and Starbucks.

InformationVisit the Dom Cathedral&rsquo;s Web site at www.dom-frankfurt.de or call 069-297 0320.