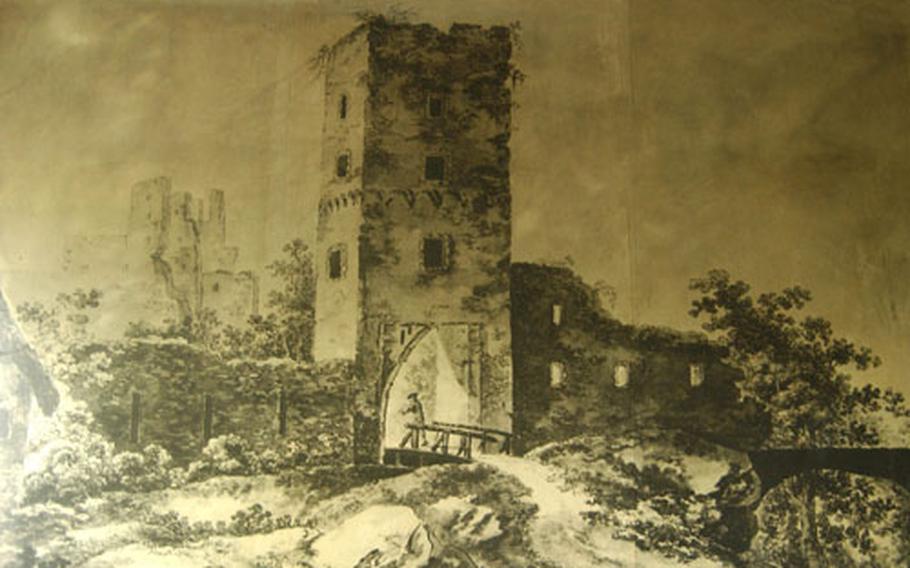 A painting in the restaurant adjacent to Burg Frankenstein shows the castle as it may have appeared before it fell into neglect in the 1700s. (Lisa Horn / S&S)

A painting in the restaurant adjacent to Burg Frankenstein shows the castle as it may have appeared before it fell into neglect in the 1700s. (Lisa Horn / S&S) Two women walk up the hill to the chapel at Burg Frankenstein. The chapel, restored in the 1800s, is used today for weddings and other services. (Lisa Horn / S&S) A couple walks from the inner courtyard of Burg Frankenstein toward its main gate. Recently discovered documents show that the castle may have existed as early as 948. (Lisa Horn / S&S) 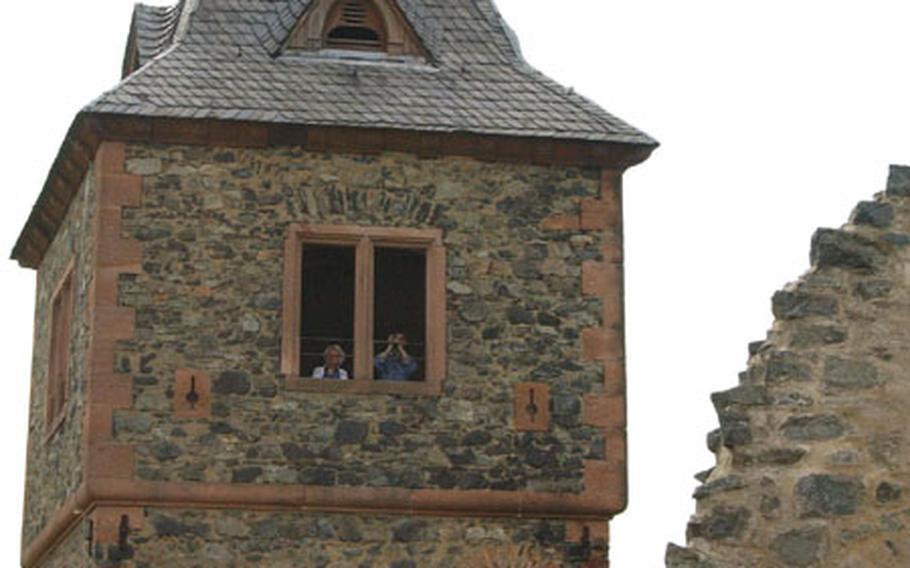 A couple peers out the tower at Burg Frankenstein. The tower offers a great view all the way to the Rhine River. (Lisa Horn / S&S) Greed and the ravages of time have given Burg Frankenstein the appearance it has today. But it is the castle&rsquo;s supposed connection to the horror novel &ldquo;Frankenstein&rdquo; that may make it appear to be more sinister than most.

The northernmost castle on the Bergstrasse, or hill road, between Darmstadt and Heidelberg, Burg Frankenstein is literally a shell of its former self. Of the nine or more castles along the Bergstrasse, most were damaged during the political and religious wars of the 17th century.

Frankenstein is an exception. A single person, not an army or a long siege, contributed to its present state of ruin.

The wife of a soldier who claimed the fortress in the 1700s sold off nearly the entire property, including the lead from the castle&rsquo;s roof, bricks and wooden stairs, for her own benefit. Local villagers later quarried what was left of the buildings.

Recently discovered documents show that the castle was built by the Frankensteins, a family of nobles, as early as 948, and not in the 13th century as previously believed. It was expanded during the 14th and 15th centuries. The outer castle consisted of stables and servants&rsquo; quarters. In case of siege, granaries and cellars for food storage were also located within the castle.

Mary Shelley, author of &ldquo;Frankenstein,&rdquo; is reported to have visited the Bergstrasse on a boat trip along the Rhine River in 1814.

Her visit may have been prompted by a tale related by her stepmother, an English translator for the Brothers Grimm fairy tales, according to Walter Scheele, German author of two books on Burg Frankenstein.

In a letter Jacob Grimm wrote to Shelley&rsquo;s stepmother in 1813, he described that years before, an alchemist at the castle had performed strange medical experiments with cadavers he removed from nearby cemeteries.

According to Scheele, many believe it was this legend that inspired Mary Shelley to pen the renowned horror story.

The castle, which sits atop a 1,200-foot hill, can be reached by hiking, biking or driving up a winding road. From the top of its walls and a reconstructed tower, there are views as far as the Rhine River and the cities of Worms, Mainz and Frankfurt. On ground level, there are small rooms and openings in the ruins that can be explored at leisure.

Also on the grounds is a small chapel, restored in the 1800s, and a restaurant that serves snacks and drinks on its terrace and meals in a large dining room.

The castle is well-known to Americans. It is the end point of a popular run from Cambrai-Fritsch Kaserne in Darmstadt up the hill to the castle, and once was the site of a medieval festival.

But it is probably best known for its parties the weekends before, during and after Halloween. Soldiers from Darmstadt are credited with starting the tradition.

&ldquo;A couple of young Germans and Americans had a Halloween party at Cambrai-Fritsch Kaserne and they were too noisy, so the military police came and [complained],&rdquo; Scheele said. &ldquo;They then asked to have the party at the castle.&rdquo;

It proved to be an ideal spot, and 30 years later it is still going on.

Directions: Located between Darmstadt and Heidelberg, Burg Frankenstein is 10 minutes away from Autobahn 5. Take the Pfungstadt exit to B-426 and follow the signs to Burg Frankenstein. Buses also stop at the foot of the hill, about a 30-minute walk from the castle.

Cost: Admission and parking at a lot at the top of the hill are free.

Times: 10 a.m. until dark. Tuesday through Sunday. Closed on Mondays.

Food: The restaurant next to the castle provides a spectacular view of the towns below. Diners can eat inside or on the terrace. It is also closed on Mondays.

Info: For more information about Burg Frankenstein and 2004 Halloween festivities, go to the Web site (in German) at www.burg-frankenstein.de. Darmstadt city&rsquo;s Web site, www.darmstadt.de, has an English-language link with a short section on the castle.