Festival: In Japan, a time of welcome 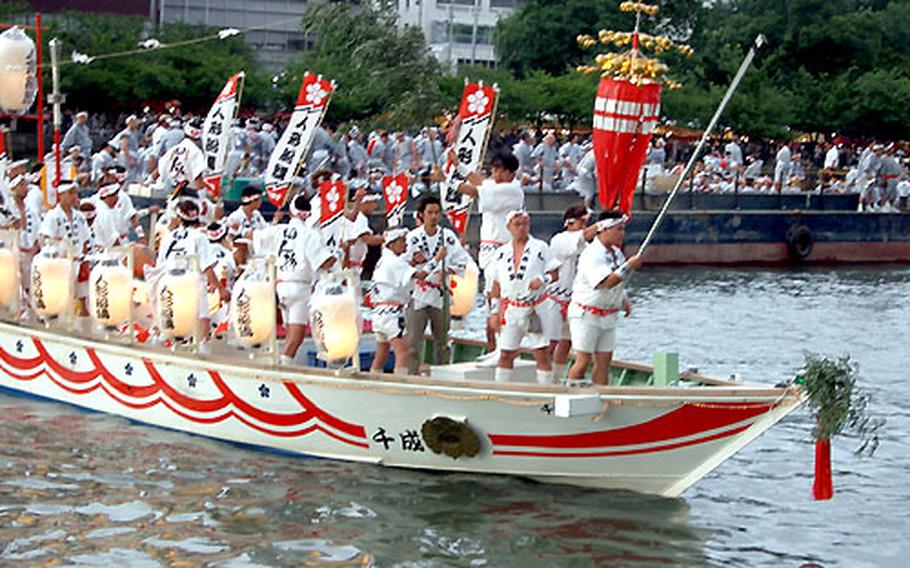 A traditional part of the Tenjin Matsuri festival are decorated halberds, or spears, symbolizing the sacred spear that was launched in the river more than a millennia ago. Where it landed, residents built Temmangu Shrine — which the Tenjin Matsuri Festival honors. (Sharen Shaw Johnson / S&S)

So much of Japan remains closed to non-Japanese that U.S. servicemembers routinely report spending entire military tours there without being invited inside a Japanese home. But non-Japanese are admitted &mdash; even welcomed &mdash; at one particularly Japanese experience: matsuri &mdash; the festival.

As throughout the Americas and Europe, Japanese towns and neighborhoods take advantage of summer to celebrate their unique features and commemorate their histories. But a few differences mark the Japanese version.

Many tend to blend both the secular and religious, honoring a centuries-old Shinto or Buddhist tradition while doing a brisk chamber-of-commerce promotion of the local area. Also, events being celebrated tend to be millennia old, not decades or centuries. And to help celebrate, several towns haul out artifacts &mdash; castle war drums, golden palanquins, fantastic court costumes &mdash; that also date back hundreds of years.

Case in point: Osaka&rsquo;s Tenjin Matsuri. It&rsquo;s one of scores of such festivals within easy reach of U.S. bases. Many festivals are in July but major ones still to be staged throughout the year are listed for your planning purposes.

Each of these festivals differs. But they&rsquo;ve enough in common that Tenjin Matsuri suggests what to expect.

It&rsquo;s celebrated each year in late July &mdash; this year is was July 24&ndash;25. The festival commemorates Sugawara no Michizane, who died 1,100 years ago.

Michizane, according to Temmangu Shrine, was a renowned scholar who rose to be the emperor&rsquo;s top aide. By spreading lies, Michizane&rsquo;s envious rival succeeded in having him demoted and exiled. Michizane cried to leave Kyoto, which he loved, although he never criticized either enemy or emperor.

But immediately after his death, the legend goes, so many natural disasters and epidemics struck Michizane&rsquo;s enemy and other court nobles that to appease his spirit, a shrine was built in Kyoto and he was deified as Tenman Tenjin, the god of literature and calligraphy.

He was buried, the legend continues, where the ox pulling his coffin stopped, refusing to move further. Temmangu Shrine was built above his burial spot. And two years later, in 951, a religious spear was set afloat in the river near the shrine. A purification ceremony was held where it came ashore, as people arrived in boats to welcome the gods &mdash; and so the Tenjin Matsuri festival began 1,042 years ago.

Core elements remain today, as indicated in a festival description distributed by the city of Osaka. The first day, some 200 people will accompany the &ldquo;shindo,&rdquo; or child chosen to carry the sacred spear, from Temmangu Shrine to a skiff. It&rsquo;s rowed to the center of the river, where the shindo sets the spear afloat amid prayers for the festival&rsquo;s and city&rsquo;s success.

The festival begins to the pounding of an ancient war drum from Osaka Castle, street performances by troupes of costumed Japanese dancers and a parade through Osaka featuring the Goshoguruma, Michizane&rsquo;s gilded, ox-drawn palanquin.

The next evening, as dusk thickens, tens of thousands of spectators swell the riverbanks for blocks through downtown Osaka. Many of the women wear colorful yukata, kimono-like robes of light cotton in bright summer prints with contrasting obi, or belts &mdash; which provide a handy place to tuck the free fans advertisers distribute to festival-goers.

As dusk thickens, the festival&rsquo;s distinctive feature &mdash; the parade of boats &mdash; begins. For the next several hours, as lanterns and moonlight replace the sun, some 100 boats and barges, glowing with the golden light from thousands of paper lanterns, parade up and down Osaka River.

One, rowed by 40 energetic young men, carries the sacred spears or halberds; another parades Michizane&rsquo;s palanquin, a third displays the booming war drum, sounded by a team of drum-beaters called ganji; look for their towering red hats.

And huge fireworks explode in the skies above &mdash; one of the region&rsquo;s more spectacular displays of hanabi, Japanese for fireworks. It means &ldquo;fire flowers.&rdquo;

A final ceremony restores the palanquin and mikoshi, or portable shrines, to their permanent homes. Eventually, darkness and silence reign. Once again, Osaka has propitiated its gods &mdash; and had a boisterous great time in the process.

In early August in Aomori Prefecture, &ldquo;Nebuta&rdquo; &mdash; illuminated papier m&acirc;ch&eacute; dummies representing men and animals &mdash; are placed on carriages and pulled through the streets at night, all accompanied by live flutes and fifes. The origin of Aomori&rsquo;s Nebuta Matsuri is believed to be derived from the legend of General Sakanoue no Tamuramaro and his conquest of the Ezo people &mdash; aboriginal inhabitants of Tohoku district in about 800 A.D. The government forces frightened the Ezo tribes with huge lighted floats. The festival is later followed by a daytime display, as well as fireworks at night. Last year, 3 million spectators attended the festival.

Sendai Tanabata &mdash; or Star Festival &mdash; is the largest of its kind in Japan. It&rsquo;s observed in Miyagi Prefecture in early August, one month later than in most parts of the country. The streets are decorated with colored paper streamers and strips. The legend of Tanabata originated in Chinese folklore concerning two stars &mdash; the Weaver Star (Vega) and the Cowherd Star (Altair). These stars are said to be lovers who could meet only once a year on the seventh night of the seventh lunar month. Japanese people, mainly women, pray to the Weaver Star for success in love and proficiency in skills such as sewing and weaving. Last year this festival attracted 2 million spectators.

Over its almost 400 year history, the Awa Odori dance has evolved to accomodate current trends, so it&rsquo;s not maintained strictly in its original form. Every year at Obon season &mdash; in mid August &mdash; people join all over Awa Odori prefecture, and Tokushima city, the main stage of Awa Odori, becomes a &ldquo;dance paradise.&rdquo; &ldquo;The dancing fool and the watching fool are both fools, so why not dance!&rdquo; is a popular Awa Odori chant.

The Hirosaki Nebuta Matsuri in early August doesn&rsquo;t have the rowdiness of the Aomori Nebuta. The festival involves children pulling floats through the streets of Aomori Prefecture, with the main floats being fan-shaped and lantern-like. As with the Nebuta floats, these are also handpainted and illuminated from the inside. There are two parade routes which are followed alternately on different nights.

The eisa, a folk performing art, is a dynamic, spirited dance intrinsic to the midsummer Bon festival &mdash; or Festival of the Dead. The musical instruments used in the eisa include the samisen, large barrel drums, and small hand drums, or paranku. Men play the samisen and beat vigorously on the drums, as women dance to the rhythms. On the night of July 15, after the ancestral spirits have returned to the world of the dead, the dancers of each village in Okinawa Prefecture gather in the courtyard of the kami ashagi (major site of community worship) and begin the eisa. After offering the first dance to the village gods, the dancers make the rounds of the homes in the village.

The Yosakoi Festival is held for four days from Aug. 9-12 every year in Kochi, Japan. People dance passionately to the Yosakoi music in Otesuji street, Central Park, Masugata and Obiya-machi with Naruko clappers. It&rsquo;s a very carnival-like atmosphere. Costumes worn at Yosakoi Festival vary from traditional Happi and Kimono to modern dress.

The Kanto Festival originated in the Horyaku period &mdash; 1751 to 1763 &mdash; as a prayer for good harvests and purification. Since then, people in the Kubota castle town of Akita clan carried on the event. Brightly costumed young men balance bamboo poles hung with 22 to 46 lanterns on their palms, shoulders and foreheads as they parade through the city. It was named &ldquo;Kanto&rdquo; in 1881. Last year, 1.2 million people attended the early August festival in Akita Prefecture.

Over 410 years ago Gujo Hachiman had its first obon odori, and it has since grown from a village obon to a national event. Gujo Hachiman begins its obon season in mid July and it continues to mid September. For two months with 30 evenings of dancing, the music is heard throughout the city. Each year from Aug. 13&ndash;16 thousands (greater than the population of the city) visit the city and begin dancing at 8 p.m. and stay to sunrise the next day. This year it was reported that more than 100,000 dancers attended Gujo Hachiman on Aug. 14.

Tenjin Matsuri is considered to be one of the three largest and most famous festivals in all of Japan. The festival takes place over two days &mdash; in the last week of July &mdash; the highlight being a parade of thousands of participants accompanying priests and sacred mikoshi, or portable shrines. The procession makes its way over two kilometers from Osaka&rsquo;s Tenmangu Shrine to Tenjin Bridge. Upon reaching the bridge, the procession takes to the water and a river procession of more than 100 highly decorated boats and barges travel from the Dojima River to the Okawa river while more than one million spectators view an awesome fireworks display.

The fourth largest festival in Tohoku, this event has been presented in various forms for hundreds of years in Yamagata Prefecture in early August. The dance performed in the Hanagasa Matsuri is called the Hanagasa Odori, and its motions are based on those of rice farmers of old. In its present form, waves and waves of dancers wearing colorful coats use wide hats decorated with flowers. There are also parade floats, many of which carry drum players and famous entertainers. More than 10,000 townspeople dance their way through the city&rsquo;s streets, and last year 1 million partiers attended.