Felsenmeer: Grab the kids and climb a German geological marvel 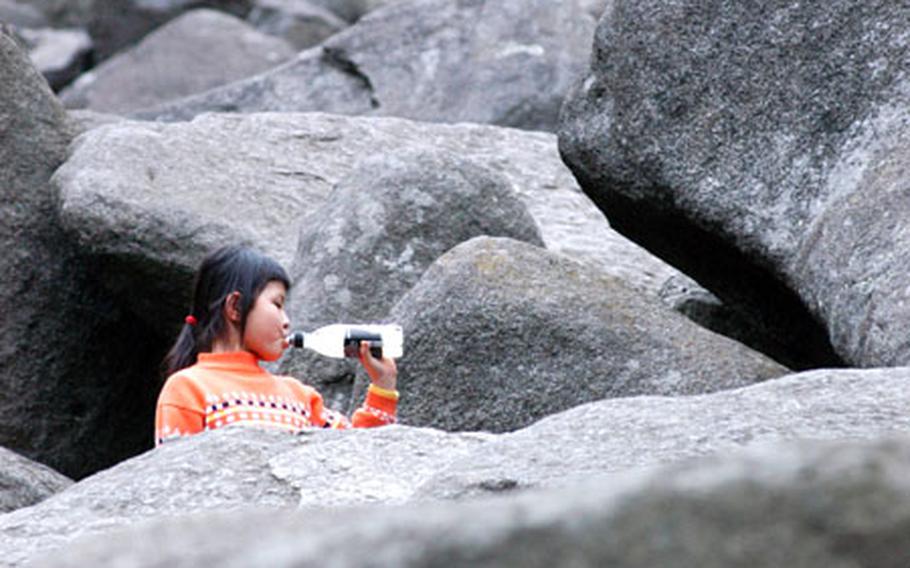 Felsenmeer is a peculiar concentration of rocks that converges into a waterfall of granite, spilling downhill in a disorderly stream. (Ben Murray / S&S)

Visitors can view Germany&rsquo;s curious Felsenmeer in a number of ways: an archaeological hotbed, a geological marvel or a historical focal point. But most kids see the park in its purest form: It&rsquo;s a great pile of rocks to climb on.

Translated into English as &ldquo;sea of rocks,&rdquo; the jumble of boulders near the town of Reichenbach is more a river of rocks than a placid lake of stones.

Starting as a broad wash of blocky crags and car-size boulders at the top of a valley wall, the Felsenmeer is a peculiar concentration of rocks that converges into a waterfall of granite, spilling downhill in a disorderly stream. Interspersed with more than 320 ancient works by Roman-era stonecutters, the result is a veritable playground for adventurous hikers, climbers and history buffs alike.

Though mythology tells of a pair of giants creating the geological oddity by hurling great rocks at each other across the valley, Felsenmeer is actually the product of years of erosion around a vein of hard stones that have outlived the sediment that once surrounded them.

Now crisscrossed by a network of trails leading to both the natural and manmade highlights of the area, the park has signs outlining various hikes through the sea.

Hikers who prefer to stay on trails can begin winding their way through the stones at the main trailhead, called Siegfriedsquelle, but the real fun of the Felsenmeer is found in clambering among the mounds of rocks, hopping from boulder to boulder. An abundance of refrigerator- to Volkswagen-size slabs and smooth, rounded edges on many of the stones make it an open jungle gym for kids and a moderate climbing challenge for the less sure-footed.

Even the most athletic visitors will be puffing for breath by the time they get near the top of the valley wall, where most of the Roman ruins are located.

Strewn about the upper reaches of the Felsenmeer are hundreds of hand-hewn stones bearing the marks of industrious Roman masons, who chopped massive blocks and curved pillars out of the boulders.

The biggest and best preserved is the Riesens&auml;ule, the Giant Column, a smooth, 30-foot cylinder produced by the Romans in the fourth century. The 27-ton monolith once stood upright, but was knocked down about 350 years ago after it became a lightning rod for local officials because of the parties often held at its base.

But while the Riesen&auml;ule is the most impressive ruin in the park, a stroll around the upper reaches of the Felsenmeer will reveal dozens of rocks scored and scalloped by the hammers, wedges and saws used by the Romans to carve the great blocks.

Half-finished and abandoned pieces such as the Schiff (ship) and Sarg (coffin), named for everyday objects they now resemble, are scattered around the park, and can be located on the handy trail maps posted around the Felsenmeer. Also dotted around the park are natural stone formations named for their peculiar shapes, such as Crocodile Rock and the Giant Seat.

All the rocks around the Felsenmeer can be climbed upon, but visitors should be wary on rainy days; the smooth rocks are extremely slippery when wet.

DIRECTIONS: Felsenmeer is east of Autobahn 5 between Darmstadt and Heidelberg. To start at the bottom of the park: From the A-5, take the B-47 highway east toward Reichenbach and Lindenfels. Once in Reichenbach, follow signs and head north toward Beedenkirchen on a winding, uphill road. The Siegfriedsquelle parking lot is just outside the town on the left.

To start at the top: Follow directions above, but continue past the parking lot. Farther up the road on the left is the road to the R&ouml;mersteine entrance, or drive through Beedenkirchen and turn left at the &ldquo;T&rdquo; intersection, toward Staffel and Balkhausen. Several miles down the road is a sign for the road to the Felsberg entrance on the left.

TIMES: There are no gates to the parking areas at the four park entrances, so you can enter at any time. Negotiating the rocks in the dark may be difficult, however.

COSTS: Admission is free, but parking at Siegfriedsquelle costs 2 euros for the day.

FOOD: There are two snack stands and a restaurant serving everything from German fare to pizza at the main parking area just outside of Reichenbach, called the Siegfrieds- quelle entrance. Within the park, adjacent to the Reisen- s&auml;ule, is a kiosk that serves beverages (including beer), hot bratwurst, candy and snacks. There is also a small restaurant at the top of the hill near the parking lots.

INFORMATION: The park hosts several events in the summer, starting with the &ldquo;birthday of the Felsenmeer spirits&rdquo; on May 5. The park does not have a Web site, but information is posted at the main trail head, and guides in English can be purchased from the kiosk in the park for 1.30 euros.