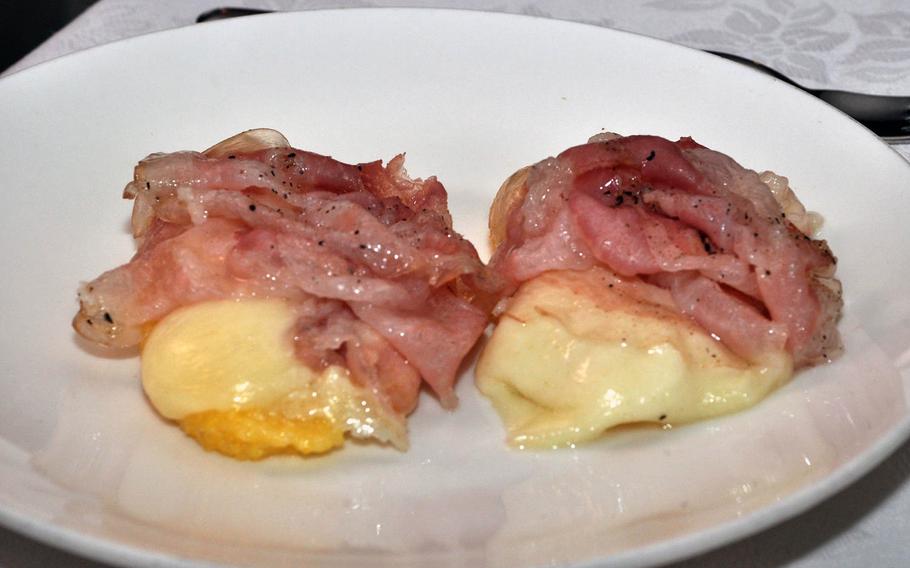 Polenta topped with cheese and bacon is one choice from the appetizer list at Trattoria Da Carmelo in Pasiano, Italy. (Kent Harris/Stars and Stripes)

Polenta topped with cheese and bacon is one choice from the appetizer list at Trattoria Da Carmelo in Pasiano, Italy. (Kent Harris/Stars and Stripes) 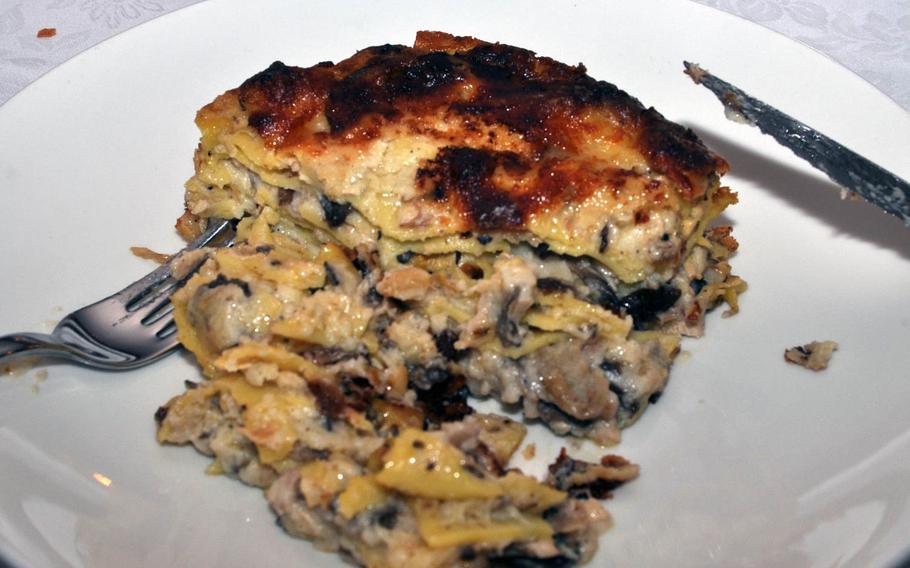 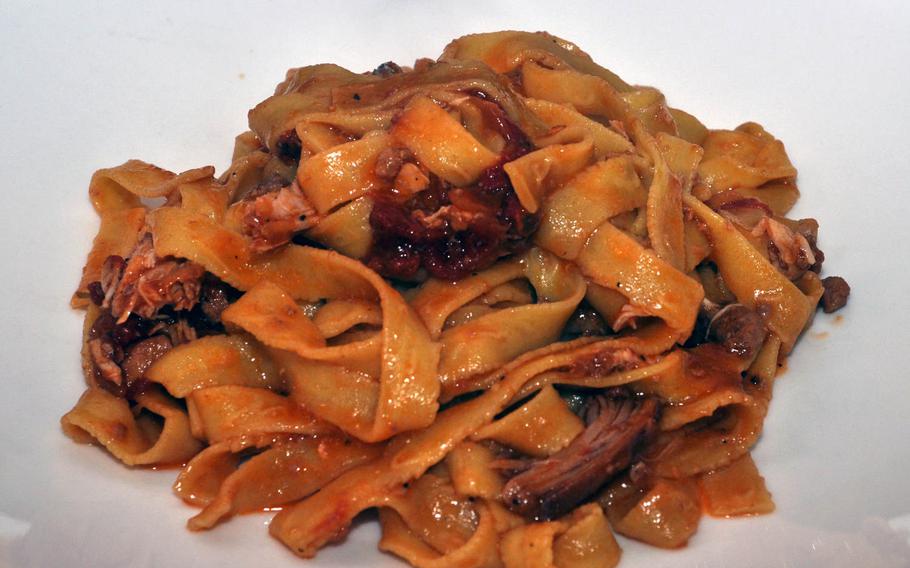 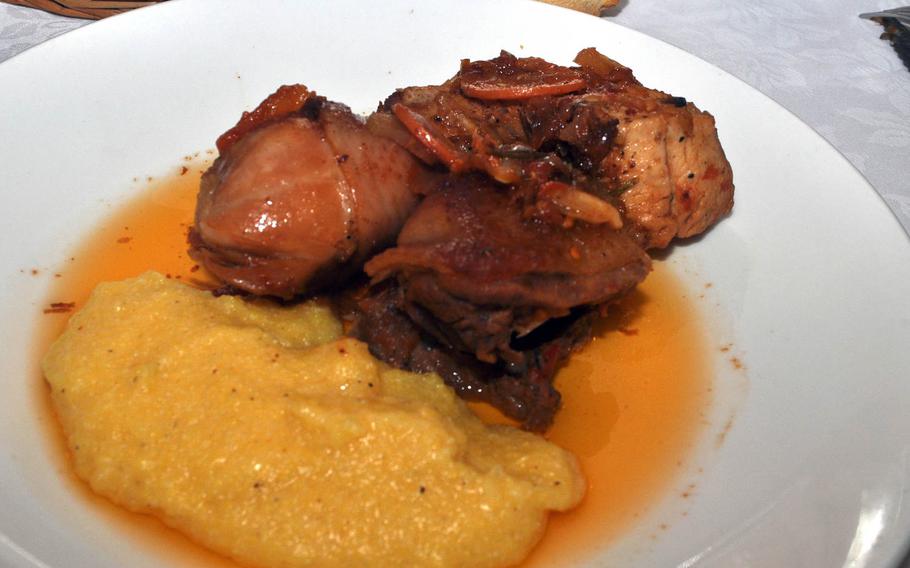 This dish featuring pieces of chicken with a side of polenta is the house special at Trattoria Da Carmelo in Pasiano, Italy."Pollo in Tecia" comes from a family recipe. (Kent Harris/Stars and Stripes) 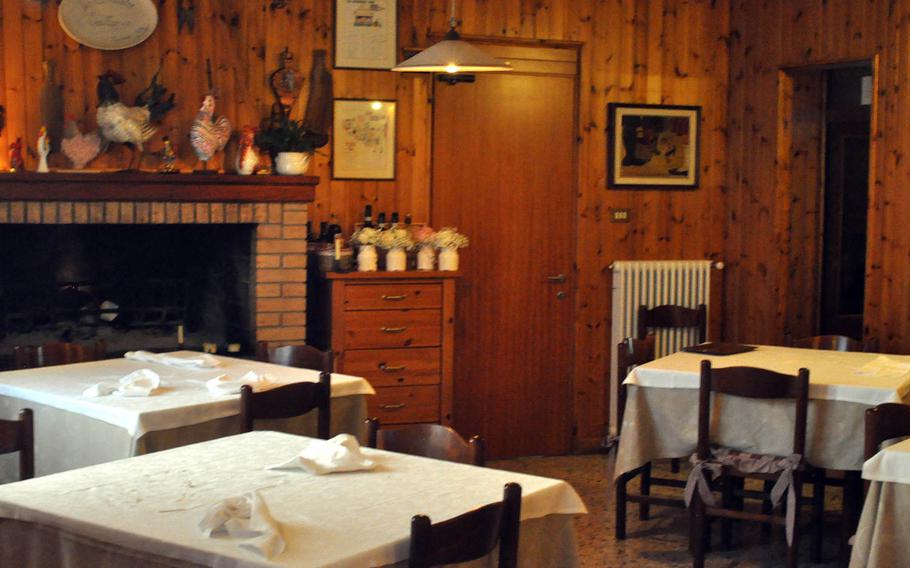 The main dining room at Trattoria da Carmello seats a little more than 30 people and was an addition to a home that has housed three generations in Pasiano, Italy. (Kent Harris/Stars and Stripes)

The building that houses Trattoria da Carmelo in Pasiano, Italy, has been the family home to three generations and a gathering place for local farmers and residents, first as a general store and now as a restaurant.

And it’s far from the beaten path, situated among scattered farms and houses on a narrow, winding road barely wide enough for cars to pass each other.

“We are here in the middle of nowhere,” said a smiling Lisa Feltrin, who runs the establishment with her husband (and chef), Gabriele.

So customers who don’t live nearby — and there are certainly more than a few regulars among them — generally hear about it via word of mouth.

“You come here because you want to come here,” Feltrin said.

When it housed a general store, the building, which dates to the 1920s, was a place where area families gathered to dance and play cards and occasionally get food.

Gabriele Feltrin is part of the third generation to call the house home. His father, Carmelo, was working as a liquor salesman when he met Gabriele’s mother, Wilma, who was working in the family store. The couple moved a short distance away to Sacile where they hoped to start a restaurant. But they couldn’t gain the necessary approvals, so they moved back to the home they’d left and started one there in 1987.

Carmelo, now 72, is semi-retired. He and his wife passed along a few family recipes.

One of them is Pollo in Tecia, the house special, marinated chicken on the bone with a side of polenta. The dish isn’t unique to the restaurant, but the specific flavoring is a family secret.

Some items are on the menu year-round, such as tagliatelle with rooster sauce or veal stew with potatoes. But other dishes are seasonal.

“It depends on what you find in the fields or market,” Lisa Feltrin said.

Seasonal dishes on the menu in mid-November included pumpkin gnocchi with smoked cheese and a lasagna-like dish featuring pheasant and locally grown mushrooms. A radicchio dish or two will be added in December. Seafood debuts in the spring, Feltrin said.

Many of the lunch customers appear to be farmers or retirees getting together to talk as much as eat. The main dining room — probably the newest part of the house, Feltrin said — is rustic, as, generally, is the food.

Among the appetizers are homemade sausage with pickled vegetables; first course offerings include gnocchi with duck sauce and macaroni with sage. Second course options featured roasted rabbit or tripe (stomach) with Parmesan cheese.

Those who still have room can sample homemade cake for dessert.

Directions: Turn off the SP-35, the road that connects Prata di Pordenone with Pordenone, just past the traffic circle on the edge of Prata. Head toward Pasiano, turn left after less than a mile and follow the brown signs to the restaurant.