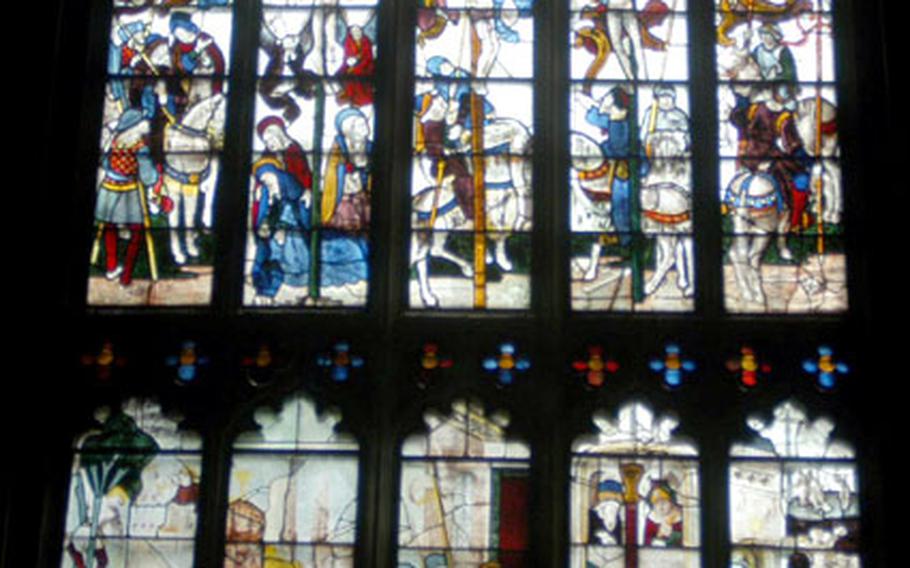 The stained glass windows at St. Mary’s Church in Fairford, England, are the main drawing card for visitors. There are 28 nearly complete windows that tell biblical stories. (Ron Jensen / S&S)

The stained glass windows at St. Mary’s Church in Fairford, England, are the main drawing card for visitors. There are 28 nearly complete windows that tell biblical stories. (Ron Jensen / S&S) 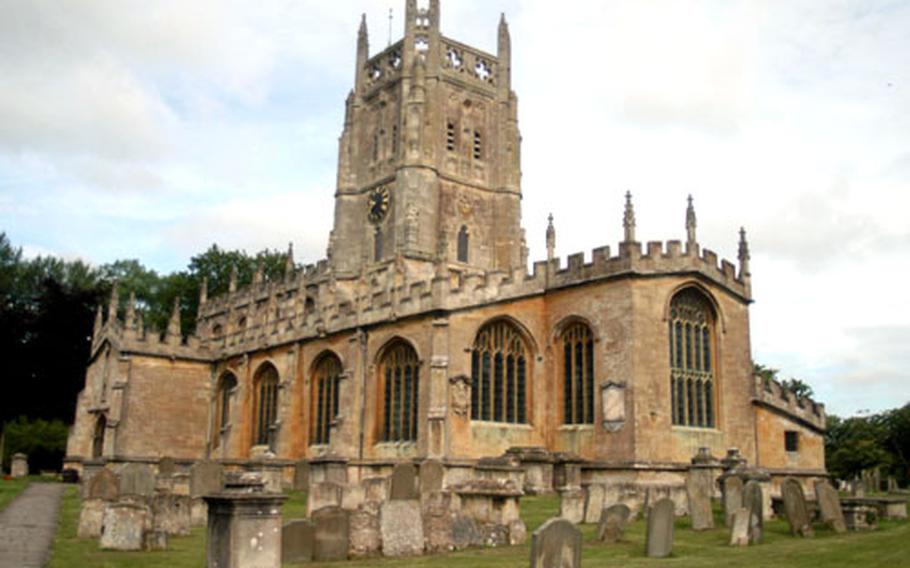 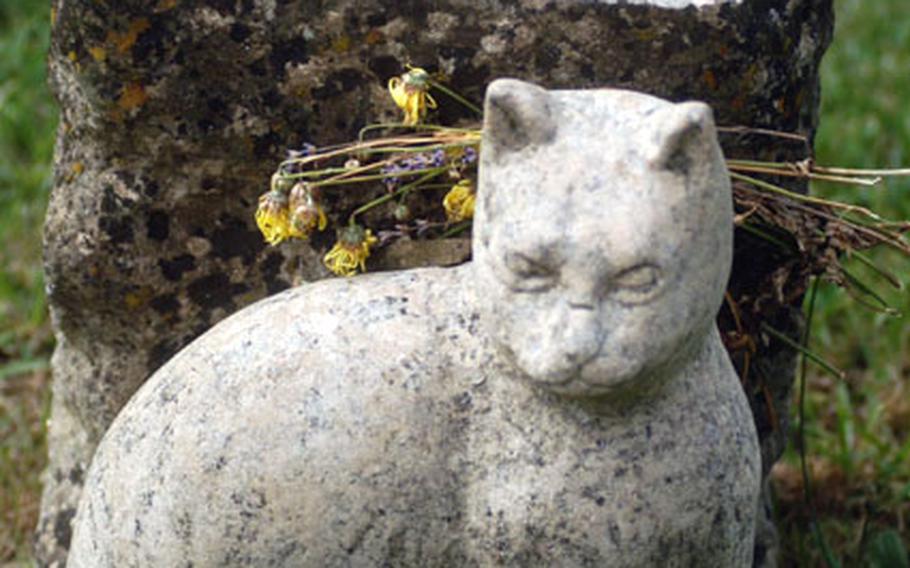 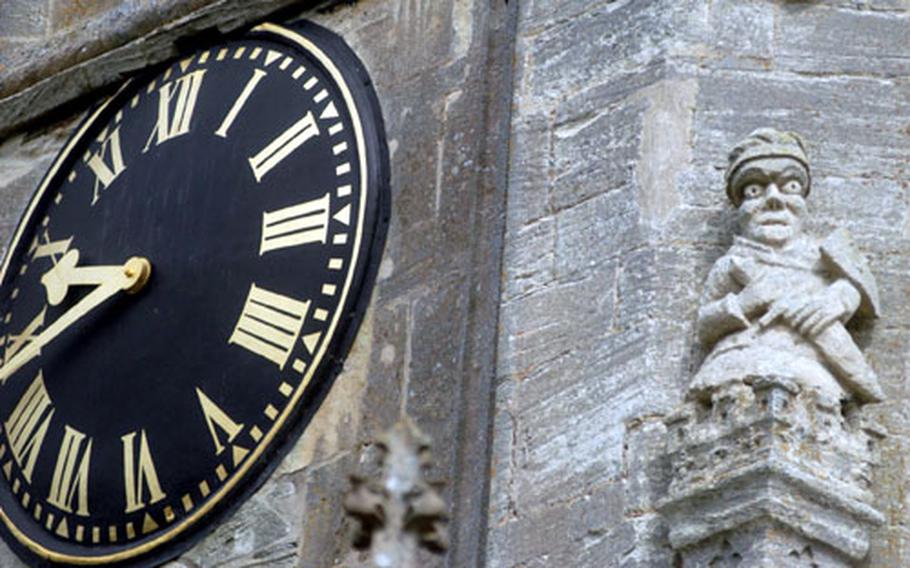 The church clock is protected by a wide-eyed guardian carved in stone. (Ron Jensen / S&S) 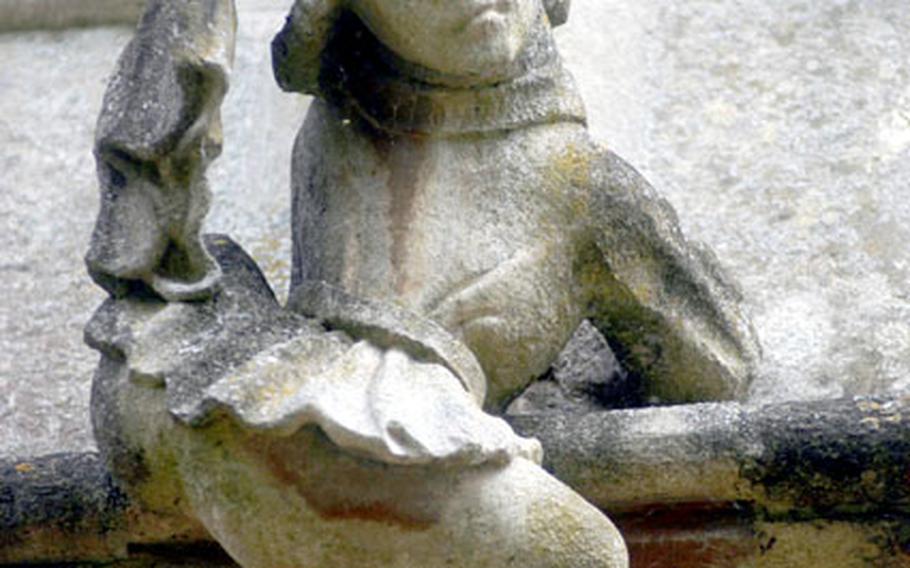 This figure of a boy climbing to the roof of St. Mary’s Church is one of the delightful details to be found at the church. (Ron Jensen / S&S)

The English countryside is dotted with churches that measure their ages in centuries. Their steeples stand tall against the rural landscape like sentinels begging a pilgrim to come forward.

Nearly every small hamlet, village or town has this quiet and dignified resident, often surrounded by graves so ancient that the names and dates have been erased by the elements.

None, however, has the drawing card of St. Mary&rsquo;s Church of Fairford, England, southwest of Oxford, west of London and near Americans stationed at RAF Fairford.

St. Mary&rsquo;s, parts of which date to the 13th century, has world-famous stained-glass windows created about 500 years ago and still nearly complete.

The 28 windows tell stories from the Bible, from Eve&rsquo;s partaking of the fruit in the Garden of Eden to Christ&rsquo;s reappearance from the tomb. Here is King Solomon settling the dispute over the young child, and there is Judas reaching for his pieces of silver.

The glass was made between 1500 and 1517 and has been repaired over the centuries due to storm damage and aging. But the work seen today was, for the most part, created by Barnard Flower, master glazier for King Henry VI, in his workshops at Westminster.

The detail is remarkable. Thomas&rsquo; touching of the wounds of Christ after the resurrection is stunning, as is the window depicting Jesus&rsquo; entry into Jerusalem and eventual death on the cross.

While the windows may be the church&rsquo;s drawing card, they are, by no means, the only item worth viewing. Take a look at the chancel stalls, carved in about 1300, and notice the figures. A man with two dogs, a youth teasing a girl, and a man and woman draining a barrel are only a few of the seemingly lighthearted scenes to be found.

The church is open to visitors year-round, usually from about 10 a.m. to 4 p.m. or dusk. There is no fee, but donations are appreciated. A colorful guidebook, used for this article, is available for a donation.