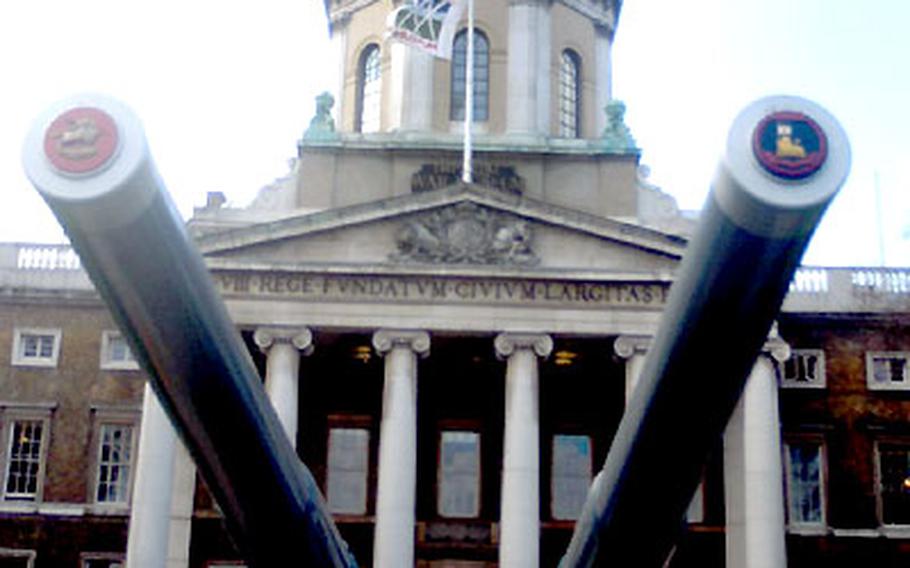 Two large naval guns seem to guard the Imperial War Museum, where an exhibit telling the story of D-Day has opened. The exhibit — open until May, 2005 — tells the story of individuals who were involved with planning and execution of the invasion of Europe in June 1944. (Ron Jensen / S&S)

Two large naval guns seem to guard the Imperial War Museum, where an exhibit telling the story of D-Day has opened. The exhibit — open until May, 2005 — tells the story of individuals who were involved with planning and execution of the invasion of Europe in June 1944. (Ron Jensen / S&S) 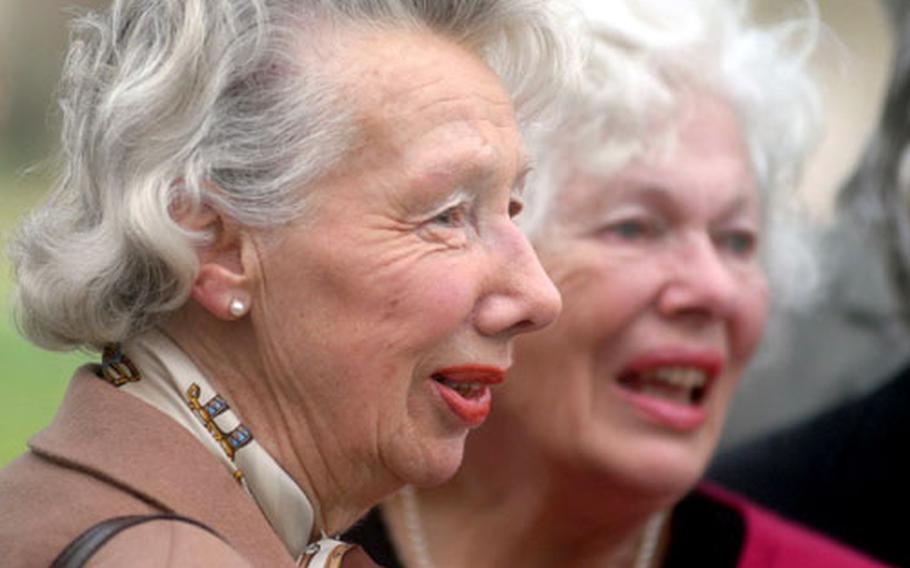 Monica Littleboy, 82, left, and Jean Irvine, 79, were both involved in the events of June 6, 1944, known forever as D-Day. Their stories are part of the exhibit at the Imperial War Museum. (Ron Jensen / S&S) 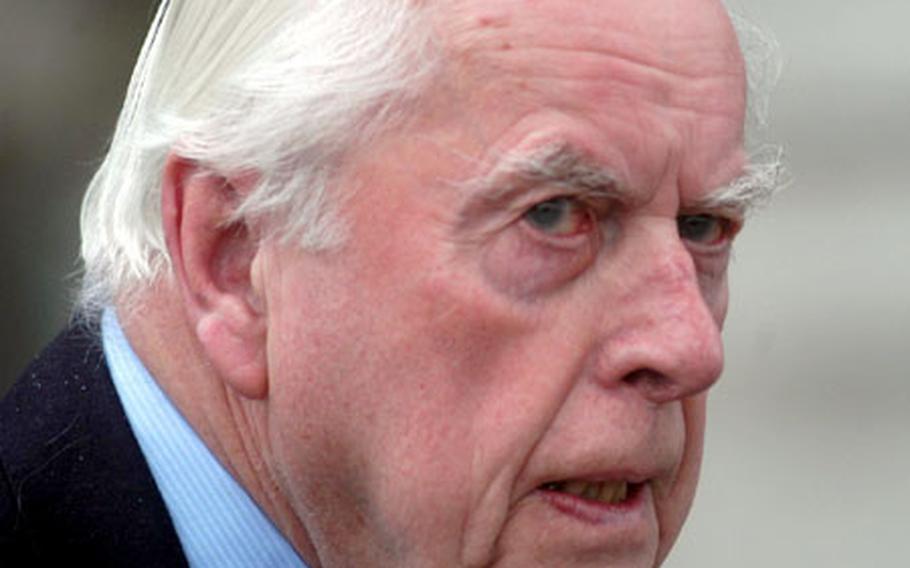 Terence Otway was commander of a British parachute unit that landed in France early on the morning of D-Day with a mission to secure a German coastal battery that threatened the invasion beaches. (Ron Jensen / S&S)

In the British telling of the story of D-Day, one of the heroes is Lt. Col. Terence Otway, commander of the 9th Parachute Battalion of the 6th Airborne Division.

It was his task in the early hours of June 6, 1944, to drop into Normandy and put out of action heavy German guns known as the Merville Battery, which could have wreaked havoc on the beaches where Allied troops were to land.

&#8220;I was told personally by [Gen. Bernard] Montgomery and by [Prime Minister Winston] Churchill that I had to . . . neutralize those guns,&#8221; Otway said recently at the opening of a D-Day exhibit at the Imperial War Museum in London. His story is among the many told in the exhibit, which will remain open until May 2005.

Otway jumped with 750 men for the mission, landing five minutes past midnight. The paratroops were scattered across Normandy and some drowned in the marshes. Otway was forced to attack the well-defended gun position with barely 150 men.

His success is the stuff of legend in British military history. Although the guns turned out to be French 75 mm instead of the 150 mm thought to be there, the problems they could have caused were substantial.

The exhibit that opened in April is designed to personalize the historic invasion. &#8220;It&#8217;s about the preparation and planning of D-Day, plus the events [of the day] themselves,&#8221; said Penny Ritchie Calder, the head of the exhibit.

Among the stories it tells is that of an engineer who helped build the Mulberry harbor that made reinforcement of the initial assault possible.

Another is of Fanny Gore Brown, who was on duty at a planning headquarters of the day of the invasion, plotting the movements of German ships and submarines.

Other tales are told from the perspective of those who were there or had a distant seat, from a double agent to an army chaplain.

Gustav was a pigeon issued by the Royal Air Force to a Reuter&#8217;s correspondent. Gustav delivered the first report of the troop landings from a ship off the coast of Normandy, flying 150 miles back to his roost near Portsmouth in five hours and 16 minutes.

The exhibit includes the Dickin Medal that was awarded to the bird.

Among other items are Montgomery&#8217;s handwritten notes for the invasion. Another is a diary from a British soldier who landed on Gold Beach. His entry for June 5 says, &#8220;D-Day tomorrow, everybody quite excited.&#8221;

American participation is well-represented. The Medal of Honor presented to Brig. Gen. Theodore Roosevelt Jr. is there, along with a letter he wrote to his commander asking for permission to join the landing party.

Helmets, entrenching tools and other medals are part of the American exhibits. So is a sea-sickness bag, a reminder that many soldiers were so sick on the rough water of the English Channel they said they preferred the dangers of the landing beaches.

The German defenders, too, are represented in the extensive collection. Field Marshall Erwin Rommel&#8217;s collar patches are on display, as are several weapons used by the Germans on D-Day in their effort to stop the invasion.

There are some touching artifacts, such as the letter that stops in mid-sentence. It was being written by a soldier&#8217;s sister when she was interrupted by the telephone call informing her he was missing.

The invasion of France is a well-known story, Calder said, but the personal tales give a visitor a closer glimpse of the famous day.

Monica Littleboy, who was also present for the press day that opened the exhibit, will never forget it. Now 82, she was an ambulance driver with the First Air Yeomanry stationed at the Isle of Wight on D-Day.

She helped move the first wounded from the ships to the hospital. It is a sight she still remembers.

It was a busy time. The first casualties arrived that night and they seemed to come in a never-ending stream.

Thinking about the day is painful to this day, but she has a unique perspective.

Jean Irvine was 19 and in on the secret. She was a member of the Women&#8217;s Royal Naval Service and working as a filing clerk in charge of more than 800 top-secret files about the invasion. For more than a year before the invasion, her work put her inside the planning, sometimes working 80 hours a week.

She said the date of the invasion was never written down. It was always referred to as D-Day.

She would have loved, she said, to tell her stepfather how wrong he was with his predictions of when and where the invasion would take place. But she could not.

When American broadcaster Edward R. Murrow broke the news of the invasion on radio the night of June 6, 1944, Irvine said her first reaction was surprise.

Where: The Imperial War Museum is on Lambeth Road in southeastern London. It is reached from Underground stops Lambeth North, Southwark, Elephant & Castle and Waterloo.

Cost: None, admission is free. However, you might spend money at the bookshop and caf&#233; in the museum.