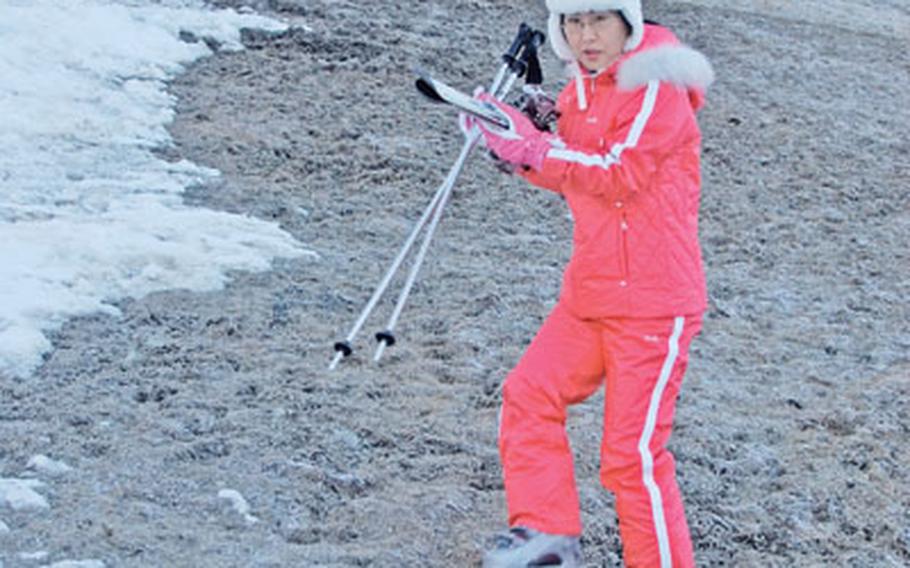 Grafenwöhr skiiers Incha Robson, front, and Chris Koslosky carry their skis as they attempt to reach the snow via a muddy traverse at Saalbach Hinterglemm, Austria. (Seth Robson / S&S)

Now, forget all that.

If this winter is anything like the last, the snow bunnies won&#8217;t be downing apr&#232;s-ski drinks to warm themselves after a day of carving up the slopes around Switzerland&#8217;s Engelberg.

They might, however, need a swig of the hard stuff to dull the pain of bashing a knee on any of the mountain&#8217;s exposed boulders.

That&#8217;s because last year there was hardly any snow to speak of.

Of the 17-or-so ski trips planned last year by the Heidelberg Outdoor Recreation office, all but one or two were canceled because of lack of snow, said Tucker Wakefield, the office&#8217;s director.

It&#8217;s too early to tell if this winter is going to be as crummy as the last, but there are signs for concern.

Already, there&#8217;s about 4 feet on the ground in parts of Switzerland and Austria, and about 3 feet on the upper slopes above Garmisch-Partenkirchen, Germany.

That might sound like good news, but the rule in Europe is if it snows over and over again in the fall, it won&#8217;t snow during the season&#8217;s peak, said Harald Strauss, a climatologist at the 21st Operational Weather Squadron in Sembach, Germany.

Unless November&#8217;s weather is markedly different from October&#8217;s, the winter&#8217;s best ski conditions might be happening right now.

On the upside, early winter snow is usually coupled with late snow, which could stretch the season, Strauss said.

But if there&#8217;s truth behind his snow-in-fall rule, skiers and snowboarders might be better off keeping their fingers crossed for a snowless November.