Duke's Waikiki pays homage to the father of surfing 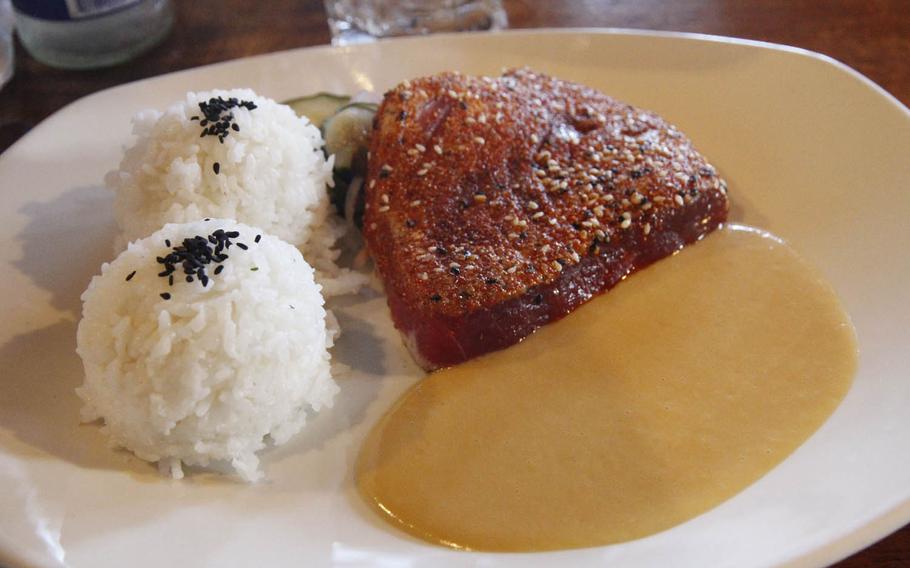 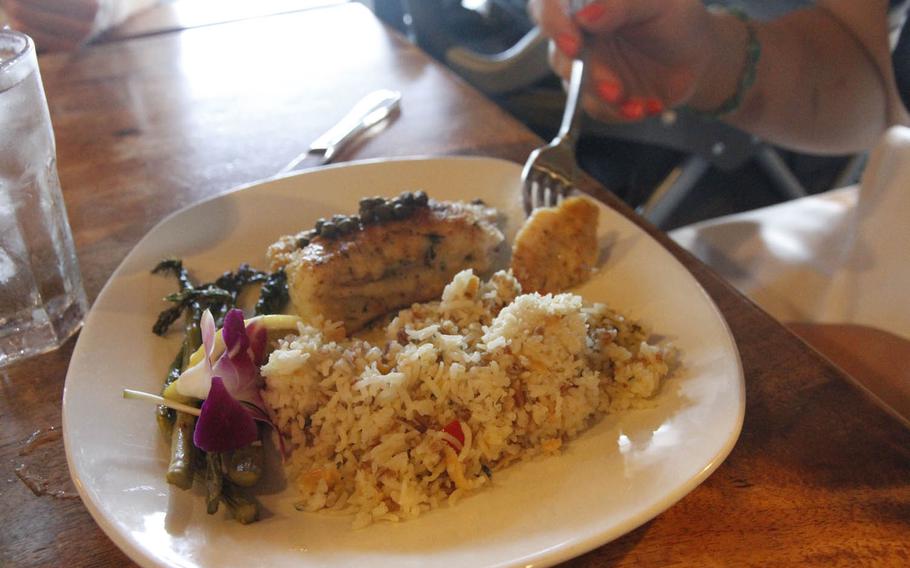 Opah, or moonfish, crusted in macadamia nuts and herbs, with a side of rice and asparagus. (Wyatt Olson) The view from Duke's Waikiki is directly on the waters that the restaurant's namesake surfed upon 100 years ago. (Wyatt Olson) The Hawaiian music comes to you at Duke's Waikiki. A three-piece band strolls among customers during a recent weekday dinner. (Wyatt Olson) 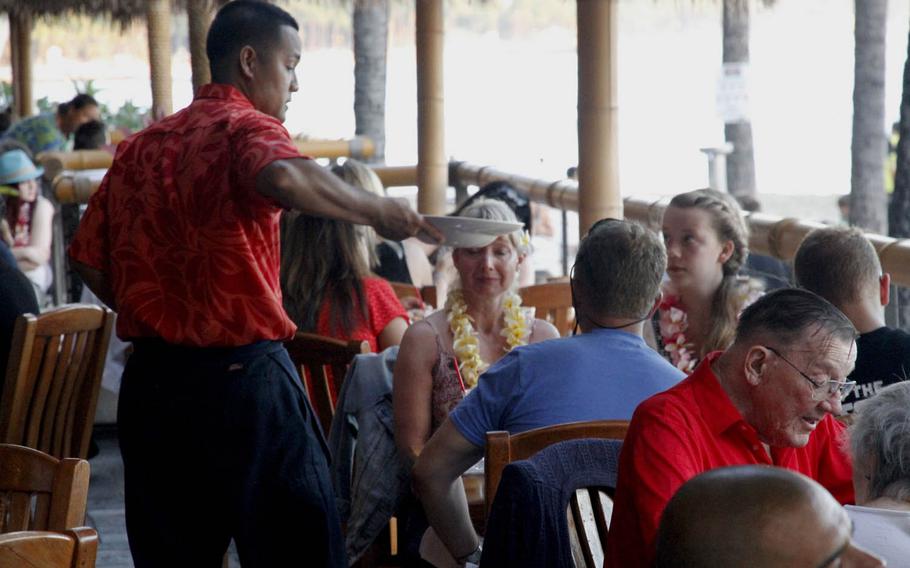 Lei all your troubles down and take a beachside seat at Duke's Waikiki restaurant. (Wyatt Olson) 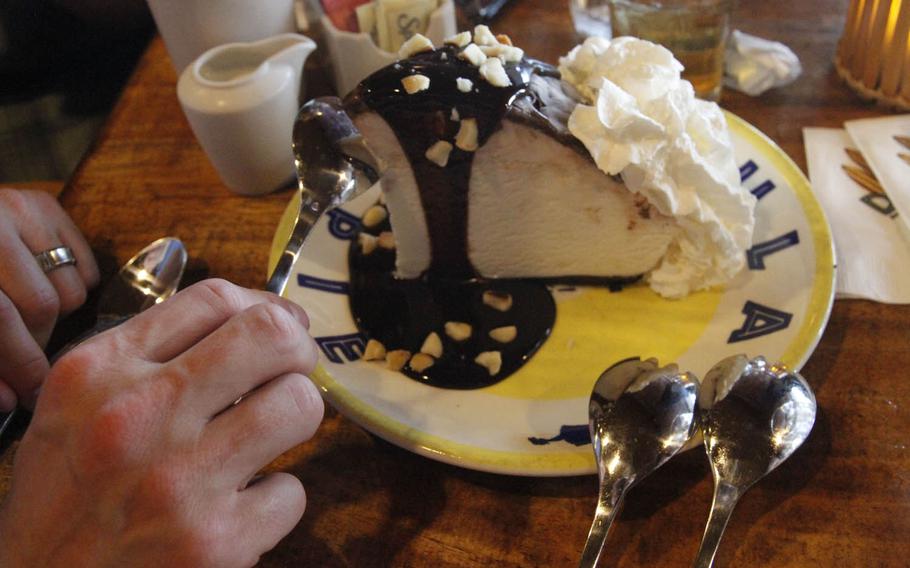 Hula pie, a decadent display of death by dessert at Duke's Waikiki, which dares diners to finish one solo. (Wyatt Olson) A bronze statue of Duke Kahanamoku, the father of modern surfing, looms over visitors at Waikiki Beach. (Wyatt Olson)

Duke’s Waikiki restaurant in Honolulu has a decidedly more local idol, but one whose claim to fame is practically synonymous with Hawaii: surfer legend Duke Kahanamoku.

Kahanamoku may not be a household name like Elvis or Marilyn, but even 50 years after his death and the spreading of his ashes over the waves off Oahu, “Duke” remains a luminary in Honolulu as the father of modern surfing.

Part of the charm of Duke’s Waikiki is the virtual gallery of photographs of Kahanamoku on several walls, but equally appealing is the scarcity of walls in the place at all. The views of the palm-filled beach and ocean blue are unobstructed from this huge beachside restaurant located in the Outrigger Hotel.

As a young boy in the late 1800s, Kahanamoku — whose father was also named Duke in honor of the Duke of Edinburgh, who visited the islands in the 19th century — honed his swimming and surfing skills in the waters off Waikiki. He fashioned his own style of surfboard after the traditional Hawaiian olo boards using the wood of the koa tree. It was a massive plank, weighing over 100 pounds.

But it was in swimming that Kahanamoku achieved his initial fame, first breaking the freestyle 100-yard record by 4.6 seconds in 1911. He went on to earn two Olympic gold medals in 1920 and a silver in 1924, coming in second only to Johnny Weissmuller, who would go on to become Tarzan on the big screen.

It was during and after his swimming competitions that Kahanamoku became the world ambassador of surfing, a sport that was little known outside of Hawaii. In frequent trips to Southern California and Australia, he generated publicity for the sport with his striking good looks and showmanship. In 1925, he immortalized his surfboard and himself when he rescued eight men from a capsized fishing boat in a heavy surf off Newport Beach, Calif., in a series of quick trips from boat to shore on his board.

The food at Duke’s Waikiki may not be quite that heroic, but it does strive to be more memorable than average tourist fare.

On a recent weekday night, our party of five — with one baby on board in a stroller — ate dinner at Duke’s and found all the dishes to be praiseworthy but a bit spendy.

I’d called two days earlier to make a reservation and learned that the prime dining hours were fully booked. But the helpful reservation clerk suggested one of our party show up about 45 minutes beforehand and put our name on the waiting list. Apparently the restaurant sets aside a very small number of tables for reservations, catering more to the ever-roving and spontaneous tourist crowd. Presto, we were in.

Your best bet is the fresh fish entree, with a choice of four preparation styles ($27.95 to $31.95). Duke’s style is baked in a garlic, lemon and sweet basil glaze; seven-spice ahi is intensely Hawaiian, with fish seared medium rare and served with papaya mustard sauce and a side of white rice; macadamia nut and herb crusted style is lightly dusted with Parmesan cheese and bread crumbs, then topped with lemon/caper butter; and last is spicy sesame-ginger, which is glazed with a sweet-and-spicy ko choo jang sauce, a Korean bean paste.

Each of the four styles is matched with the most fitting fresh catch of the day, so the offerings will vary on each visit, particularly season to season.

During our dinner, the macadamia nut was matched with opah, or moonfish, while the spicy sesame style was paired with opakapaka, or pink snapper. The seven-spice was used for the rare-seared tuna.

The fish was splendidly fresh and well matched in flavor and texture with their modes of preparation.

Several of us chose the extensive salad bar, which costs $3.95 with an entree. As the entrees come with little in the way of green vegetables, this is a smart choice if you have a generous appetite. The vast salad bar is a meal in itself, and it’s offered as a stand-alone meal at $17.95.

Duke’s has become best known, however, for its Hula Pie, a dessert that’s fit for an entire table rather than an individual.

The mammoth “slice” of pie stands on a chocolate cookie crust, which is piled high with macadamia nut ice cream, then topped with chocolate fudge, whipped cream and — wait for it — more macadamia nuts.

It’s a dessert that would do Duke Kahanamoku proud because it’s ample enough to surf upon.

olson.wyatt@stripes.com Twitter: @WyattWOlson Know a restaurant or entertainment spot you’d like to see reviewed in After Hours? E-mail Paul Alexander, Pacific After Hours editor, at alexander.paul@stripes.com.