Dresden: The glory, the fall and the rebirth English-speaking tour guides in costume are plentiful in downtown Dresden. The guides are heavily bundled after a recent snowstorm covered much of Germany in a rare blanket of white. (Seth Robson / S&S)

English-speaking tour guides in costume are plentiful in downtown Dresden. The guides are heavily bundled after a recent snowstorm covered much of Germany in a rare blanket of white. (Seth Robson / S&S) The back of the ticket for a Lipsius-Bau art exhibit shows a painting of Dresden’s Augustusbrücke (Augustus Bridge), which crosses the Elbe River. (Seth Robson / S&S) 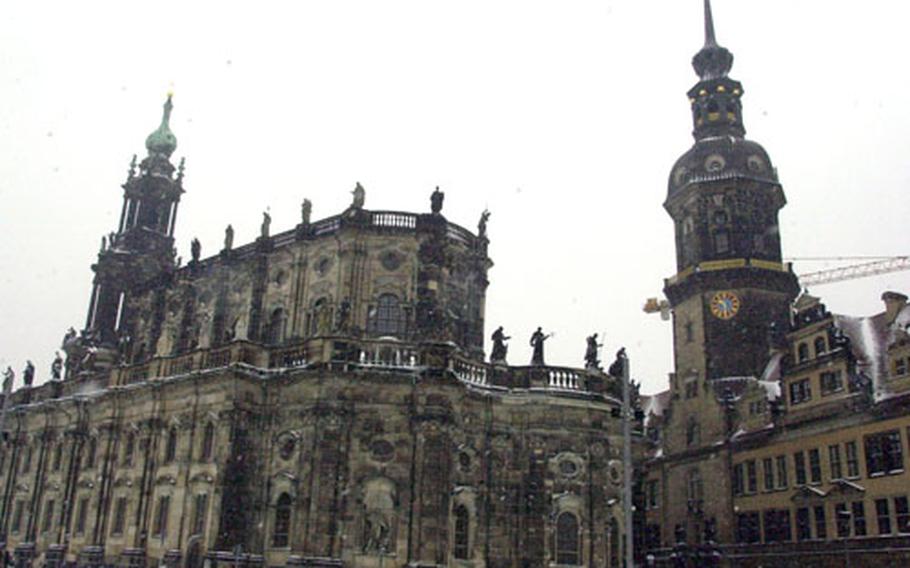 Dresden’s cathedral, the Katholische Hofkirche, is one of the landmarks of the city. (Seth Robson / S&S) 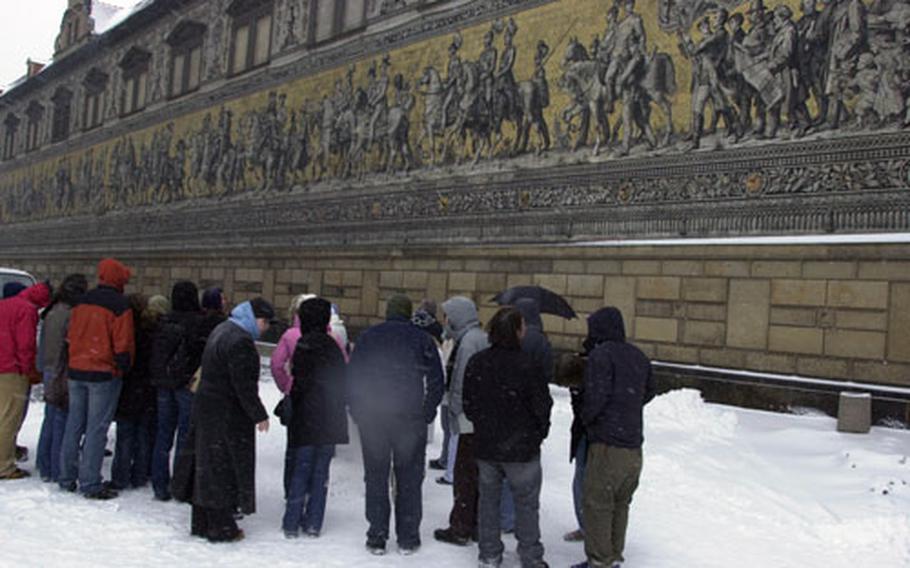 “Procession of the Dukes,” a giant mural along the side of the city palace in downtown Dresden, gives another look at the city’s history. (Seth Robson / S&S)

Sixteen years after the fall of communism and 60 years after this city was destroyed by Allied bombers, much of Dresden, Germany, is starting to look like its old self.

Many of the ancient buildings that the city was famous for before World War II have been rebuilt from rubble.

Before the war, Dresden &mdash; capital of the German state of Saxony &mdash; was renowned as a center of art and culture. Its baroque architecture made it one of the most picturesque cities in Europe.

That changed on Feb. 13, 1945, when the Allies carpet-bombed the city, creating a firestorm that killed at least 25,000 people and destroyed or damaged most of Dresden&rsquo;s historic buildings.

The raid was the subject of the 1969 novel, &ldquo;Slaughterhouse-Five&rdquo; by Kurt Vonnegut Jr. He was a scout with the U.S. 106th Division and was captured and detained in Dresden as a prisoner of war when the bombing happened.

Since then, high-tech industries have made Dresden one of the most prosperous cities to emerge from behind the Iron Curtain.

It is the first event in the Lipsius-Bau in 60 years. The towering 19th-century building was destroyed in the 1945 raid but recently reopened after a lengthy restoration effort.

The exhibit celebrates the reopening of an even more impressive and older building, the Frauenkirche (Church of Our Lady). The gigantic, ornate Protestant church was built from 1726 to 1743 and reconsecrated in October after a decade- long restoration effort to rebuild it from rubble that lay untouched from 1945 until 1994.

Artwork depicting the city dating to the Middle Ages is on display at the Lipsius-Bau. The works include 16th- and 17th- century prints showing the nearby Augustusbr&uuml;cke (Augustus Bridge) crossing the Elbe River and the Cathedral of St. Trinitatis. Today both have been restored and look pretty much as they did hundreds of years ago.

There are oil paintings by the 18th-century Venetian artist Bernardo Bellotto, known as Canaletto, including several pictures of the Frauenkirche. Canaletto&rsquo;s paintings also show damage to the city suffered during 18th-century conflicts in Europe.

Images of the devastated city in 1945 are prominent. In one ink sketch, blasted buildings are rendered in the red, white and blue of the British and U.S. flags, while the rubble appears as broken swastikas. In another wartime drawing, the ghosts of dead Germans appear to claw their way out of the blackened rubble.

The exhibit features photographs of communist-era buildings with their straight lines and uniformity. And there are modern-day views of the city, including a collage of neon signs and nighttime images of buildings.

After you have finished checking out the images, step outside to see how Dresden changed and, at the same time, how it has stayed the same after hundreds of years.

On the QTDIRECTIONS: Dresden is a 2&frac12;-hour drive from Grafenw&ouml;hr or Vilseck. The quickest route is to follow B299 to the A-93 autobahn. Then follow signs to Dresden, which take you along the A72, A4 and A17 autobahns, until you see exit signs for the city.

The Lipsius-Bau gallery is next to the Augustusbr&uuml;cke overlooking the Elbe River on Br&uuml;hlschen Terrasse, also called the Balcony of Europe, and one of the city&rsquo;s main sites.

COSTS: Entrance to the exhibit at the Lipsius-Bau is 6 euros.

FOOD: There are plenty of cafes and restaurants in downtown Dresden offering German-style food. There are also several fast-food restaurants.

INFORMATION: English language information about Dresden is available at www.dresden.de.