Dresden: From the ashes: Renewed city is ready to celebrate 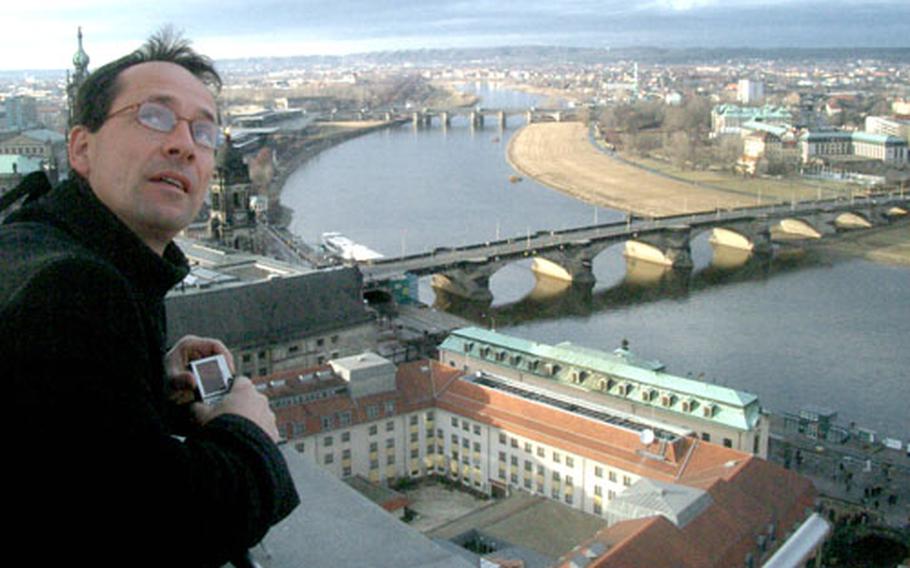 A tourist on the Frauenkirche tower looks back at the church. Entrance to the church is free, but for a few euros you can climb to the top and enjoy a panoramic view of the city. The entrance to the tower is on the outside of the church, around a corner from the main entrance. (Joseph Giordono / S&S)

A tourist on the Frauenkirche tower looks back at the church. Entrance to the church is free, but for a few euros you can climb to the top and enjoy a panoramic view of the city. The entrance to the tower is on the outside of the church, around a corner from the main entrance. (Joseph Giordono / S&S) The Zwinger is a collection of museums in a sprawling baroque palace in the heart of the city. The museums include the Old Masters Gallery, an armory, some clever exhibits on old scientific instruments and porcelain from nearby Meissen and elsewhere. (Joseph Giordono / S&S) 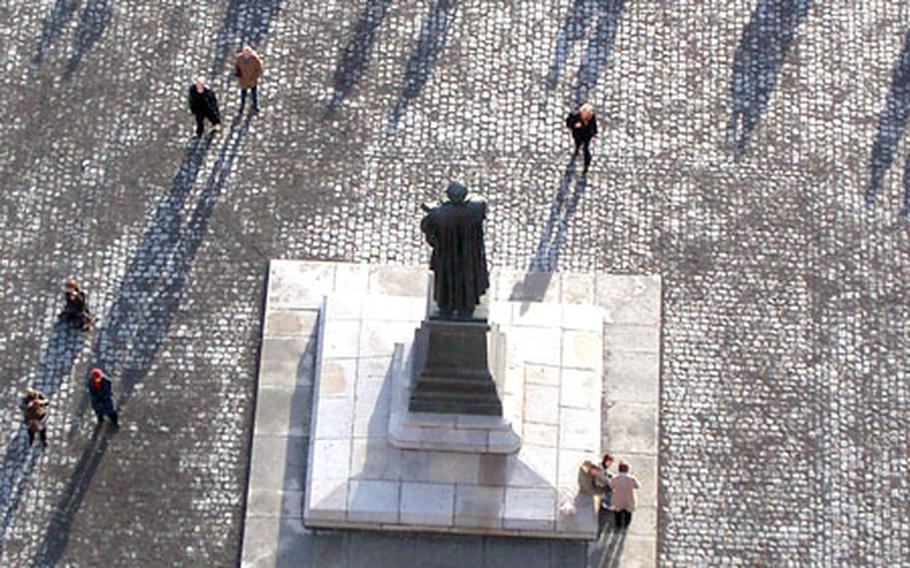 From the top of the Frauenkirche, you can watch people mill aroud the statue of Martin Luther that stands in front of the chapel. (Joseph Giordono / S&S) 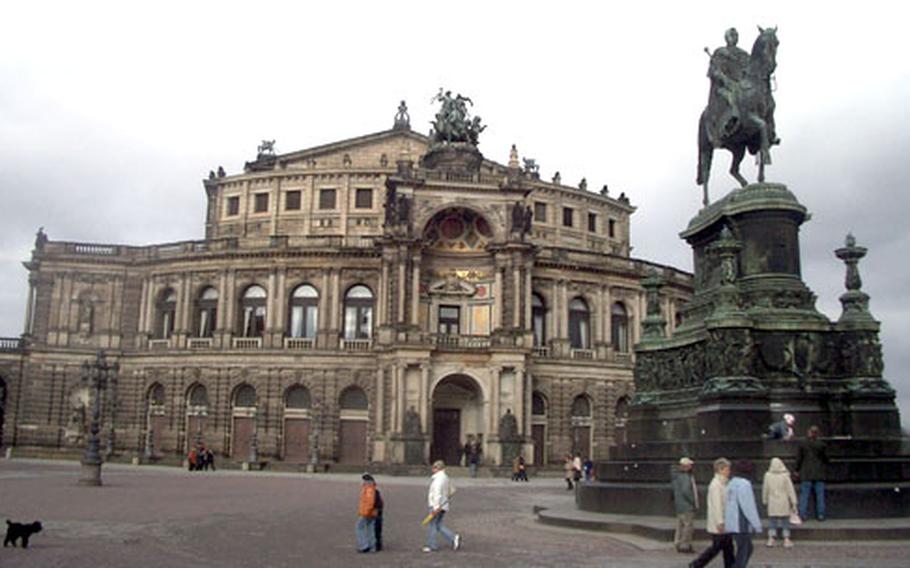 The Semperoper is one of the great European opera houses. If you can get tickets to a performance, it’s a classic way to spend an evening in Dresden. Just make sure it’s not a five-hour Wagner opus. (Joseph Giordono / S&S) A few spots in the city — like this mosaic honoring the workers — still bear marks of the old East German socialist government. (Joseph Giordono / S&S)

Before heading to Dresden earlier this year, I was somehow looking forward to being in the one place in Germany where Americans and Brits feel more guilt about World War II than the Germans do.

In February 1945, the city was raked by Allied bombers, killing more than 35,000 civilians and making the city a symbol of the horrors of war. Friends had told me of exhibits and donation boxes at reconstruction sites, pointedly requesting a few extra bank notes from the Americans and British.

Through most of the Cold War, the East German government left large parts of the city in rubble as an indictment of the capitalist West. But once the Berlin Wall fell, Germans called for action.

Now, after a years-long, multibillion dollar effort &mdash; interrupted by massive flooding in 2003 &mdash; the city has reclaimed much of its former grandeur. Dresden is much more than a destination for war buffs or fans of &ldquo;Slaughterhouse-Five,&rdquo; Kurt Vonnegut&rsquo;s book about the bombing and aftermath. In fact, 2006 marks the 800th anniversary of a city once called the Florence of the North and a cultural capital of Europe.

From the famed Semperoper to the baroque marvel that is the Zwinger museum complex, Dresden oozes Old World charm. Walk across the river into the &ldquo;new&rdquo; side of the city &mdash; new is a relative term when dealing with an 800-year-old town &mdash; and you plunge into thriving nightlife with a decidedly new world bent.

But for a city celebrating such a milestone, you&rsquo;ll still find an oddly unfinished feel. Many of the city&rsquo;s most popular attractions are closed for renovations. The Gr&uuml;nes Gew&ouml;lbe, or Green Vault, boasting of the &ldquo;world&rsquo;s finest collection of jewel-studded precious objects,&rdquo; is closed until September. Ditto for the Albertinum, with its extensive collection of French and German impressionist art.

And for a city so enamored with its history, there is no central museum &mdash; usually called a Stadtsmuseen in Germany &mdash; dedicated to its past.

The true centerpiece of Dresden is the Frauenkirche, or Church of Our Lady, and it does not disappoint. Destroyed in the 1945 bombings, the church reopened last year after a massive restoration effort.

Lines to get inside can stretch to more than an hour or two, and the panoramic views of the city from the top are breathtaking (as is the hike up to the top of the internal staircases). In the late afternoon, when the setting sun hits the bell-shaped dome, the entire plaza basks in a golden glow. (Just ignore the sounds of construction on the neighboring hotel and shopping mall.)

Throughout this year, Dresden is celebrating the Jubilee Year with a string of festivals and special events. Jubilee Festival Week is July 14-23, marking the high point of the open-air festivities. Events include concerts themed &ldquo;Symphonic Salsa &mdash; Opera Meets Cuba&rdquo; in front of the Semperoper. The old city center will become a walking street theater festival, incorporating both hundreds of actors and passers-by.

For a 10-day period, the historic Augustus Bridge will be transformed into an interactive art, music, dance and theater stage. The Dresden Historical Parade is scheduled for Aug. 27, with a huge re-enactment of the mural known as the &ldquo;Procession of the Princes,&rdquo; a series of rulers from the House of Wettin since 1127. The original painting was replaced in 1906 by a copy made with 25,000 ceramic tiles and somehow survived the WWII attack.

As far as food and lodging, there&rsquo;s a wide range of possibilities. But Dresden is best experienced with an open wallet. Spend a few dollars more than you usually would on a hotel &mdash; reserve a room in a place with a spa downstairs. Splurge on the dinners and have a few extra Radeberger beers. Have a good time.

But if you plan to go this summer, book well in advance.