Downe: Feel at home with Darwin: Explore the grounds of scientist’s estate 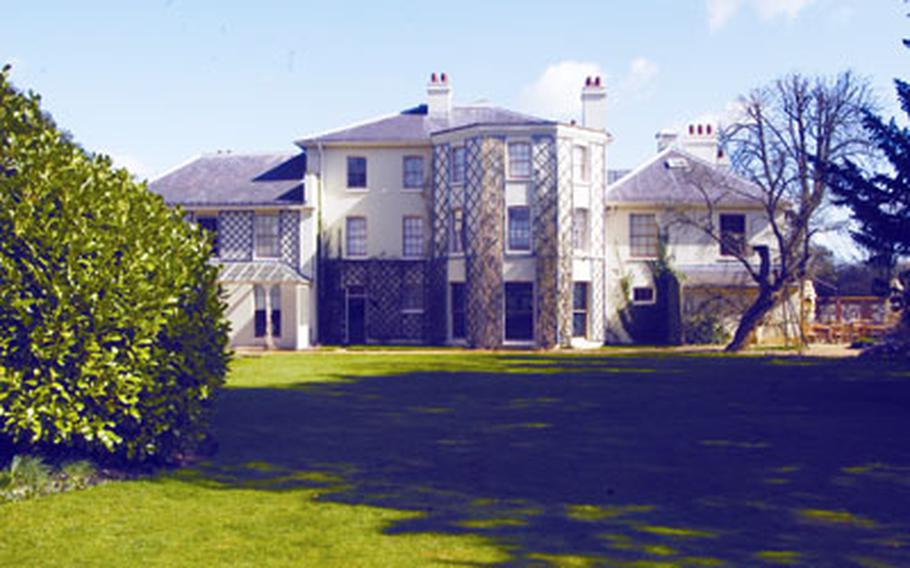 Buy Photo
In Downe, England, the back of Charles Darwin’s Down House and surrounding lawn and garden looks as it did in 1870, thanks to detailed writings by Darwin’s wife, Emma. (Photos by David Hodge/Stars and Stripes)

Buy Photo
In Downe, England, the back of Charles Darwin’s Down House and surrounding lawn and garden looks as it did in 1870, thanks to detailed writings by Darwin’s wife, Emma. (Photos by David Hodge/Stars and Stripes) 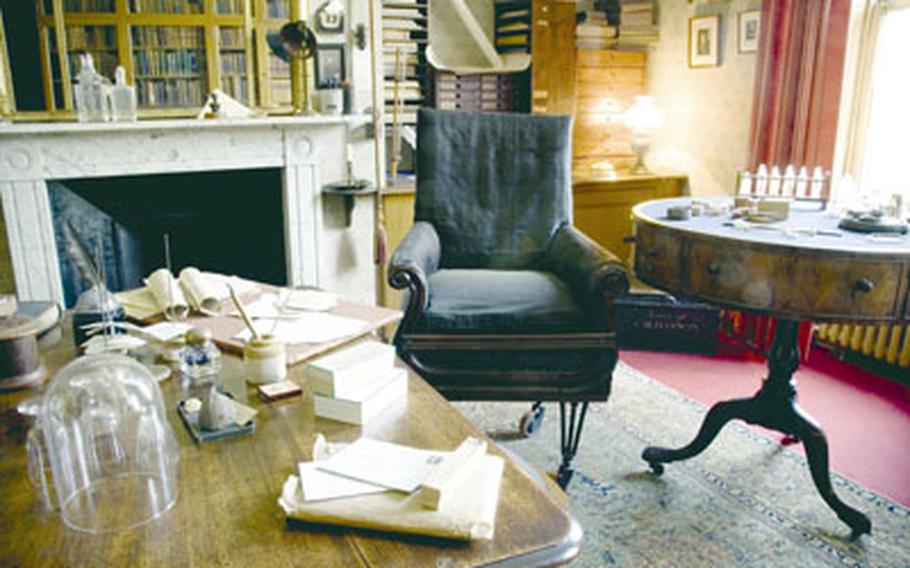 Charles Darwin’s study features many of his personal items and scientific instruments. In the background is a chair where Darwin may have sat when he wrote “On the Origin of Species.” ()

In 1842, scientist Charles Darwin felt the need to escape the pressures of life in London. He settled on a farm house in Downe, just south of the city where he could continue his research and still be close enough for short excursions back to the city.

Named the Down House, the house and surrounding garden served as the place where Darwin completed many of his greatest scientific works, including his most famous one, "On the Origin of Species."

Darwin and his family lived at Down House for 40 years, and today the English Heritage foundation manages the property, which has been accurately restored using old photographs, written works and recollections of family members.

Visitors can purchase a souvenir guidebook or opt for a narrated tour via a handheld device with headphones. As they walk around the house, they can see many of Darwin&rsquo;s personal items and scientific instruments in the study, or view the family&rsquo;s grand piano and original furniture in the drawing room. Other rooms on the first floor include the dining and billiards rooms and the inner hall.

The second floor offers static displays with original works that vary from room to room. On display are Darwin&rsquo;s handwritten notebooks, an original copy of "On the Origins of Species," and the 750-page journal Darwin kept on his five-year voyage around the world aboard the H.M.S. Beagle, which got him thinking about his theory of evolution. In other rooms, animal skulls and beetle collections litter the walls and interactive puzzles and flipbooks provide a visual interpretation of evolution.

Another popular attraction is a full-size replica of the cabin Darwin occupied while aboard the Beagle. Darwin was in his early 20s when he began the voyage and his notes were the basis of his book "Voyage of the Beagle," which was both a travel memoir and a scientific journal.

The second part of the tour takes place outside in the surrounding gardens. Darwin, a naturalist, used the gardens as a working laboratory where he studied the relationships between plants and animals and gathered evidence to support his natural selection theory.

Thanks to handwritten accounts from Darwin&rsquo;s wife and first cousin, Emma, the garden looks very similar to the way it did in 1870.

As you walk around, you can stop at more than a dozen locations and hear interesting facts about Darwin&rsquo;s scientific methods through the audio guide. For instance, when Darwin wanted to study the effect earthworms had on the soil, he created the "wormstone" &mdash; a circular stone, still visible on the tour, that measured the amount of earth displaced by burrowing worms. After placing the stone, he returned 29 years later to find that the stone had indeed sunk, albeit in miniscule amounts.

You can also take a leisurely stroll along a half-mile trail with beautiful views of a nearby valley or see the house&rsquo;s kitchen garden, the source of all the fruits and vegetables used in the estate&rsquo;s kitchen. In its prime, the garden could sustain up to 22 people, yearround.

Finish off the tour with a look inside the greenhouse to see a variety of plants, many of which were grown by Darwin during his time.

From RAFs Lakenheath and Mildenhall take A11 to M11. Head south on M25, over the toll bridge, and exit at Junction 4 onto A224. At the first roundabout take the A21 exit and follow it for about three miles. Take a left on Cudham Lane and an immediate right when the road forks. Stay left for two turns and continue for about two miles on High Elms Road. When you reach the end of the road, make a right and an immediate left and then follow the signs for the Down House.

Hours of operation are typically 11 a.m. to 5 p.m. Wednesday through Sunday. From July 1 to Aug. 31 it is open daily, and the gardens remain open an additional hour. Beginning in November, closing time is 4 p.m.

Admission is 9.30 pounds for adults, 7.90 pounds for those qualifying for concessions and 4.70 pounds for children. Family tickets are also available.

This spring or summer the many trees and flowers will be in full bloom and will provide a much more pleasurable experience in the garden. The gift shop sells copies of Darwin&rsquo;s greatest works, including "The Descent of Man" or "The Expression of Emotions in Man and Animals." The official Web site is www.english-heritage.org.uk/server/show/nav.14922.