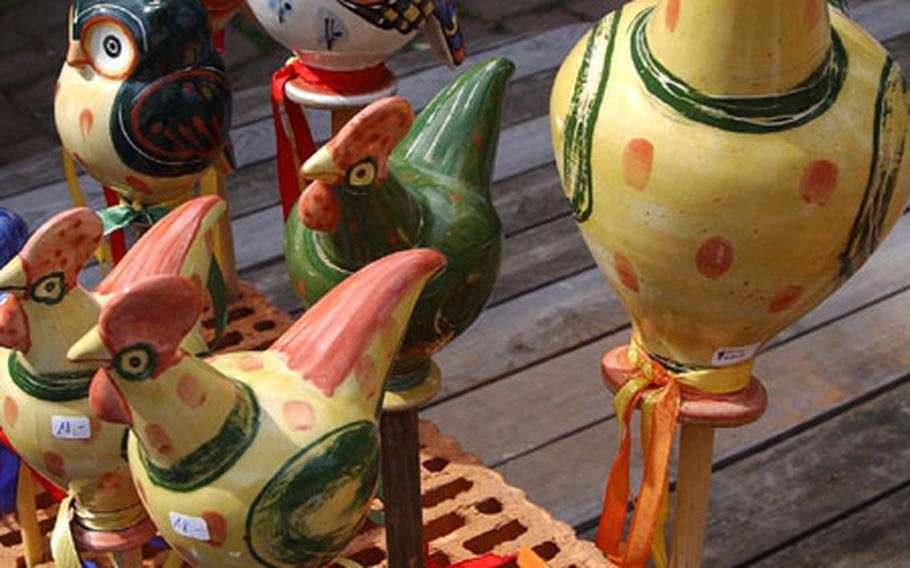 Dilsberg is also known for ceramics. These garden decorations are just a few of the pottery items available at Dilsberger Keramik. (Lisa Horn / S&S) 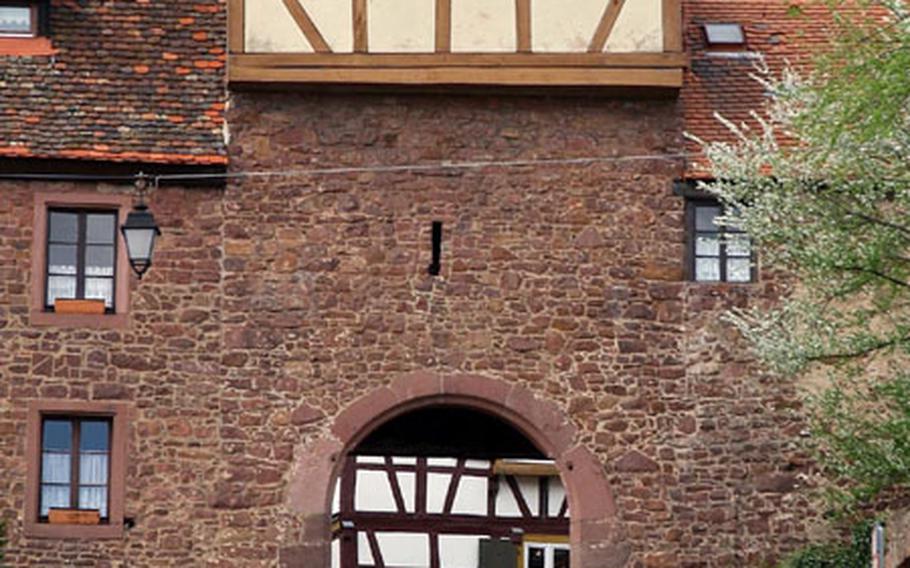 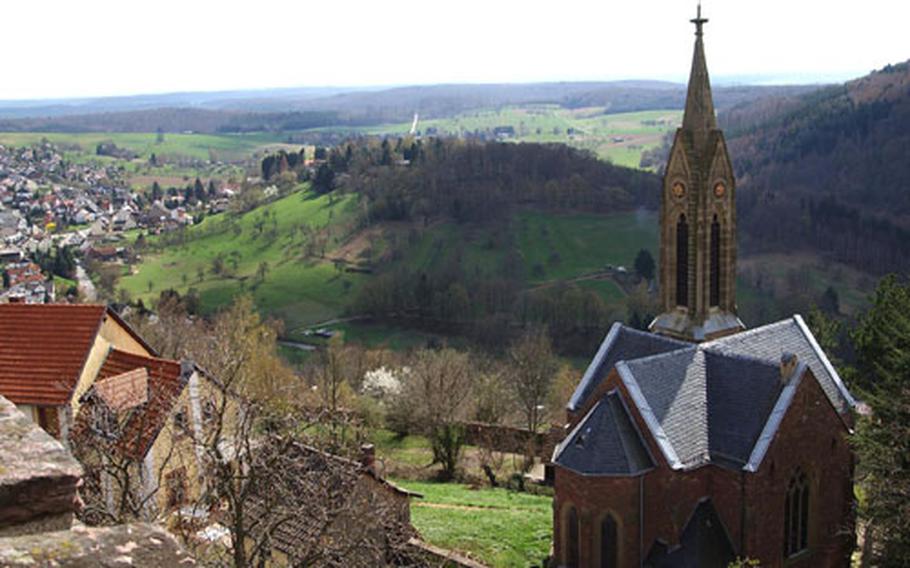 The view from the outer wall of the Dilsberg castle ruins is phenomenal. From this vantage point, visitors can also see the Neckar River far below and dozens of tiny villages. (Lisa Horn / S&S) Visitors to the Dilsberg castle can climb the tower&#39;s spiral staircase for a panoramic view at the top. (Lisa Horn / S&S)

Situated on a steep point overlooking the Neckar River valley, the German village of Dilsberg may be small, but it has plenty to offer.

The town has a history dating back to Roman times, ruins of a once-formidable castle and a popular chocolate shop run by a local celebrity.

The Romans started the settlement between 100 and 400 at a site that proved to be an excellent place for a fortress. Around 1150 the Count of Lauffen built a castle there, and some 200 years later it was expanded to serve as a safe haven for the Heidelberg court during conflicts with rivals. It also served as a jail, a detention center for unruly Heidelberg University students and an administrative center for the area east of Heidelberg.

The castle eventually fell into disrepair and was partially demolished in 1822. Although parts were restored in 1895, all that is left of the once-grand stronghold are ruins that include a tower and the castle&rsquo;s outer wall that visitors can climb for a spectacular panoramic view of the Neckar River valley.

The castle sits in the center of the old town, which is enclosed behind a city wall. It all sits on a hill above the modern town.

For those who dare to enter the old town on four wheels, parking is virtually nonexistent except for residents. A small parking area is available next to the castle ruins in the center of town. Ample parking is also available just outside the town&rsquo;s gate tower leading into the old city.

The gate tower dates to 1694 but is thought to be older and was probably part of the city&rsquo;s defensive walls during the Middle Ages.

Once inside the city, the Obergasse, the main street, leads visitors past Dilsberg Ceramics, a half-timbered three-story building full of pottery, some of which is made on the premises.

The shop also sells Salzglasur, a salt-glazed pottery with an iridescent luster. The unique shine is created by the length of time the salt is in contact with the clay, said Herbert Weinert, shopkeeper at Dilsberg Ceramics.

Farther along the Obergasse is a place many people stop to visit &mdash; Eva Hess&rsquo; Chocolaterie. It is a good idea to sample her creations at the beginning of a visit, so you can burn off the calories while walking around town.

Hess, a professional confectioner, is a celebrity on German television, appearing regularly on the variety show &ldquo;Caf&eacute; Oder Tee,&rdquo; during which she often whips up Sonntagkuchen, or Sunday cake, for the show&rsquo;s moderator and guests.

Visitors to her shop can try Sunday cake or exotic truffles Hess serves on an elegant silver tray. Green tea and Tahitian Vanilla truffles are two of her favorites.

Though the shop&rsquo;s slogan translates to &ldquo;The best for the end,&rdquo; Hess will help chocolate lovers start the day right on Sunday and May 9 and 16 when she hosts a chocolate breakfast. The event runs from 10:30 a.m. to 1 p.m. each day.

A Chocolate Fest at the shop also is planned for September.

Directions: Dilsberg is about 20 minutes&rsquo; drive east of the center of Heidelberg. From Heidelberg, take B37 to the town of Neckargem&uuml;nd and then follow signs to Dilsberg. A small parking area is available next to the castle ruins in the center of the old town. Ample parking also is available just outside the gate tower leading into the town.

Cost: Entrance to the Dilsberg castle ruins is 1.50 euros for adults; 1 euro for students and children under 14.

Food: Visitors can get a light snack at Eva Hess&rsquo; Chocolaterie or meals at the Deutsches Kaiser restaurant across from the castle. There are a handful of other cafes and restaurants in town.

Info: The town has a Web site, www.dilsberg.de, in German.