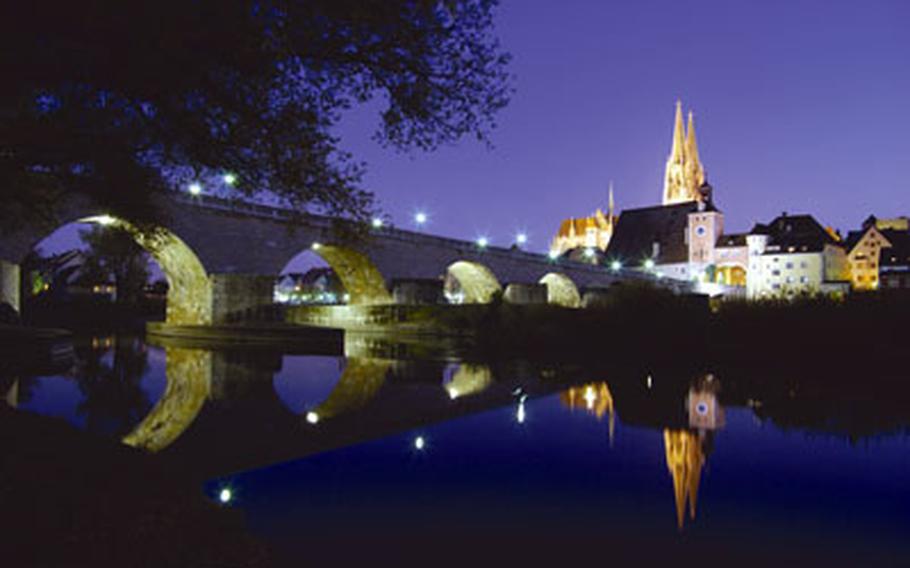 Buy Photo
The illuminated Regensburg cathedral is reflected in what is famously known as the “Blue Danube” at twilight. In the foreground is the historic Steinerne Brücke, or Stone Bridge. (Photos by Andrew Cowin/Stars and Stripes)

Buy Photo
The illuminated Regensburg cathedral is reflected in what is famously known as the “Blue Danube” at twilight. In the foreground is the historic Steinerne Brücke, or Stone Bridge. (Photos by Andrew Cowin/Stars and Stripes) Regensburg has plenty of attractive open-air cafes and traditional taverns offering local specialties. One of the most popular spots in the old city is Haidplatz. () 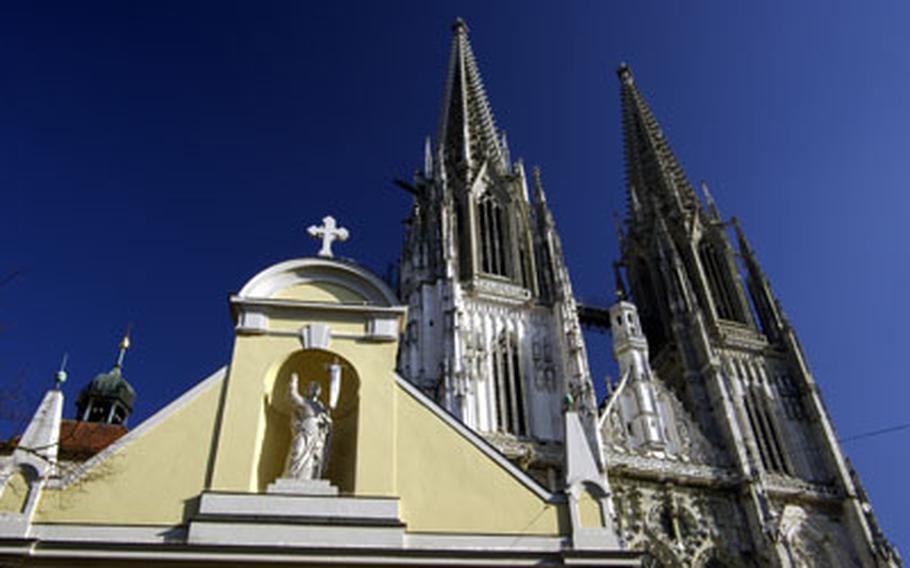 Most of the Regensburg cathedral was built in the 13th century, but the last touches (including the two spires) were added in 1869. () The Hall of Liberation sits on a hillside high over Kelheim at the end of the Danube Gorge. It is one of the manmade sights along the river from Weltenburg Abbey to Regensburg. () The cliffs along the Danube Gorge near Weltenburg Abbey are particularly dramatic in the fall when red and yellow leaves stand out against the white rock. ()

The 1,785-mile course of the Danube river between the Black Forest and the Black Sea flows through some fantastic scenery. But for a mixture of natural and man-made beauty, it is hard to beat the stretch in Bavaria between the Danube Gorge and the city of Regensburg.

For sheer drama, start where the river flows past the Weltenburg Abbey. Here, the Danube narrows to less than 350 feet wide, bringing the 250-foot-high cliffs on either side closer together and making them seem especially imposing as they rise from the river. Many of the dramatic rock formations have fanciful names, including Bishop&rsquo;s Mitre, Beehive (riddled with holes) and Napoleon&rsquo;s Suitcase (you&rsquo;ll need a fair amount of imagination to see this one).

Particularly in the fall, the landscape is as spectacular as anything you&rsquo;ll see in Germany. A round trip between the abbey, the oldest monastery in Bavaria, and the small town of Kelheim by passenger ship, about an hour long, or by a paddle boat is a truly memorable experience.

The origins of the Weltenburg Abbey go back at least to the eighth century. The whole complex was rebuilt after 1717 in the ornate baroque style, and its highlight is the sumptuous Abbey Church of St. George and St. Martin. The church has a wonderful cupola painting depicting the saints in heaven, and a superb 18th-century organ.

The abbey also offers more secular pleasures, thanks to the Weltenburger Klosterbrauerei, which is said to be the oldest monastery brewery in the world. It has been slaking thirsts since 1050, and its dark beer enjoys an international reputation.

At the other end of the gorge, Kelheim is dominated by the splendidly sited Befreiungshalle &mdash; Hall of Liberation &mdash; that tops Michelsberg Hill. Begun in 1842, this circular structure was commissioned by Ludwig I of Bavaria (the grandfather of "Mad King Ludwig&rsquo;) as a memorial to the Bavarian soldiers who lost their lives in the fighting that led to the overthrow of Napoleon in 1815.

The view from here is rewarding, and the chance to see the 145-foot-high coffered ceiling within the 18 columns is worth the climb. The 34 figures of victory symbolize the individual states of Germany at that time.

Continuing downstream on the Danube, known as the Donau in German, it&rsquo;s only a few leisurely miles to Regensburg. In 1517, Emperor Maximilian I remarked that "Regensburg surpasses every German city with its outstanding and vast buildings." Little has changed since then, because Regensburg is unusual among major German cities in that it has never suffered serious destruction. It has 1,300 listed buildings "of historic interest," and the old town is a UNESCO World Heritage Site. Add plenty of attractive cafes and traditional taverns offering local specialties, and the city has all the ingredients for a pleasant visit.

Start at the Steinerne Br&uuml;cke, or Stone Bridge, across the Danube. Resting on 16 arches, this is one of Europe&rsquo;s earliest surviving bridges. It was constructed

offers great views back over the city. The Bridge Tower contains a museum with exhibits relating to the history of navigation on the Danube.

Right next to it is the Historische W&uuml;rstk&uuml;che, renowned for its fried sausages served with sweet mustard and sauerkraut. It is believed that these treats have been sold at this spot since the 12th century, making it the world&rsquo;s oldest operating wurst stand.

Nearby is the Porta Praetoria, a second-century Roman gateway whose remains have been incorporated into a later structure, and behind it is an attractive courtyard that leads to the city&rsquo;s cathedral. Arguably the finest Gothic building in Bavaria, this church was essentially built between 1250 and 1275, but the last touches (including the two spires) were added in 1869. Inside, the most striking features are the stained-glass windows and the monumental high altar. Take the trouble to walk along the cathedral&rsquo;s south side to admire the lovely east end and south transept.

West of the cathedral is the old city and its varied architecture. One notable feature is that a number of nobles&rsquo; mansions have high towers whose apparent aim was simply to proclaim their self-importance. The tallest and finest of these, the Golden Tower, is situated close to the Old City Hall, a lovely Gothic building whose museum includes a gruesome torture chamber. On Rathausplatz, Caf&eacute; Prinzess offers wonderful cakes and confectionery, as well as having an exhibition of handmade dolls, some of which are for sale.

If you have time, you might round off your visit by driving a few miles farther down river to see the curious Valhalla building. In Norse mythology, Valhalla was the feasting hall of the chief of the gods, Odin. During battles, his female attendants, the Valkyries, selected the men who had died bravely and conducted these heroes to this place. The building is another structure of Ludwig I, who historians say was both a "Germanophile," at a time when a united Germany was just a dream, and a Grecophile, who admired Greek culture and history.

The king&rsquo;s architect, Leo von Klenze, clearly had the Parthenon of Athens in mind while constructing this "hall of fame" for the German nation. Reached by climbing 358 steps (or by shuttle bus, if you prefer), this slightly incongruous monument offers grandiose views of the surrounding countryside and the Danube.

Andrew Cowin is a freelance writer and photographer who lives in Heidelberg. Contact him through www.andrew-cowin.com.

Know and Go&bull; Food and drink: When in Regensburg, if you&rsquo;re not in the mood for the legendary sausages from the Historische W&uuml;rstk&uuml;che, look for an increasing rarity, the so-called Donauwaller, a locally caught fish something like a catfish.

During late summer and fall, don&rsquo;t miss a delicious slice of Zwetschgendatschi (sour-plum cake) with masses of whipped cream, or perhaps a portion of Apfelk&uuml;cherl (apple rings fried in batter) with cinnamon.

To drink, in addition to powerful ales from the Regensburg Kneitinger brewery, an interesting oddity is Apostel-Br&auml;u from Hauzenberg, which is not made from barley but from an ancient type of grain known as spelt. Regensburg is not a wine town, but you might stumble on so-called Baierwein from Germany&rsquo;s tiniest wine-growing area (only about 10 acres) between Regensburg and W&ouml;rth.

&bull; Passenger boat trips between Kelheim and Weltenburg run until Nov. 1 and resume March 21. A round-trip ticket costs 8.20 euros for adults, 6.50 euros for those up to age 16. Boat timetables, in English, are at www.personenschifffahrt-stadler.de

&bull; To arrange a tour of Weltenburg Abbey, a visit to the brewery, and lunch at the abbey, see www.klosterschenke-weltenburg.de; there is an English version.

&bull; Find full information about Regensburg in English at www.tourismus.regensburg.de