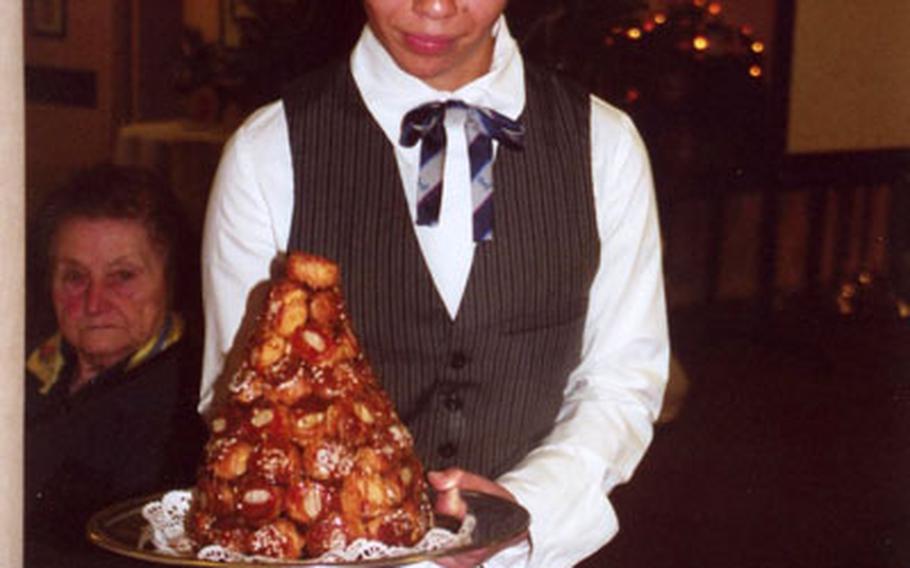 Henriette Sauvage, director of &#201;cole de Paris des M&#233;tiers de la Table du Tourisme et de L&#8217;H&#244;tellerie, a school in Paris for apprentice chefs and food service personnel with a bargain- priced restaurant, was chewing out her pupils over a meat stew they had served that afternoon.

The pot au feu was one of two main courses the day we visited the restaurant school. Fortunately we chose the other, Pintadeau r&#244;ti Grandm&#232;re (roast young guinea fowl). Delicious. We had nothing but praise for the chef and his crew, who, all clad in white, paraded into the dining room after the meal.

We&#8217;d been to the school restaurant on a previous trip and were pleased. This time, with the dollar exchange rate so low, we returned because it is also a super deal.

If you&#8217;re looking for dim lights, a classy atmosphere, an extensive menu and impeccable service, it&#8217;s not for you. But if you want good, reasonable food, an off-beat ambience and entertainment, it&#8217;s worth a visit.

Most of the patrons are senior citizens. Yvonne Lehouchu, 95, and her friend, Genevi&#232;ve Charbonnier, 75, dine out together in Paris, their hometown, two to three times a month.

The two women, who became friends years ago when they worked for the United Nations in New York, say the school restaurant is their favorite.

The school offers four-course meals Monday through Friday at 12:30 p.m. with two choices each for the entr&#233;e, main course and dessert. There is also a cheese course.

My husband and I began our meal with two Kirs (a mixture of white wine and cr&#232;me de cassis), which were served with tiny appetizers. I chose cr&#234;pes aux champignons sauce Mad&#232;re (mushroom crepes with Madeira sauce) for my entr&#233;e while my husband opted for salade Lorette, a lovely mixture of celery, beets and lamb&#8217;s lettuce. For the main course, we both settled on pintadeau served with an attractive arrangement of potatoes, mushrooms and onions.

Then came the cheese, followed by dessert. I went for the flaming bananas. My partner couldn&#8217;t resist the cream puffs presented in a large, elaborate pyramid, one on top of another, covered with a caramel glaze. A young waitress, smartly attired in black, cut off part of the pyramid for each serving.

We followed dessert with coffee, which came with chocolates.

The flaming dessert was a show. Our 20-year-old waiter, Jonathan Abiton, was a bit nervous as he lit the alcohol, but he succeeded and deftly swirled the bananas in the liquid. He beamed as he served the concoction.

He got points for that, but had lost favor when he filled the wine glasses before allowing for a tasting.

The restaurant, a large well-lit room that can seat 60, is somewhat institutional. But watching the fresh, young faces, who are under the scrutiny of a supervisor as they take orders and serve, is amusing. We saw one lad corrected for improperly holding a bottle of wine. Another needed help in carving the fowl.

Those were minor problems, easily corrected as the staff gets more seasoning.

For a total of 40 euros we had an excellent and memorable meal.

Cost: Four-course meals cost between 12 and 18 euros. Monday is a special bargain. Since the school doesn&#8217;t have many customers on Mondays, it keeps prices down then to attract more diners. That&#8217;s the day we went.