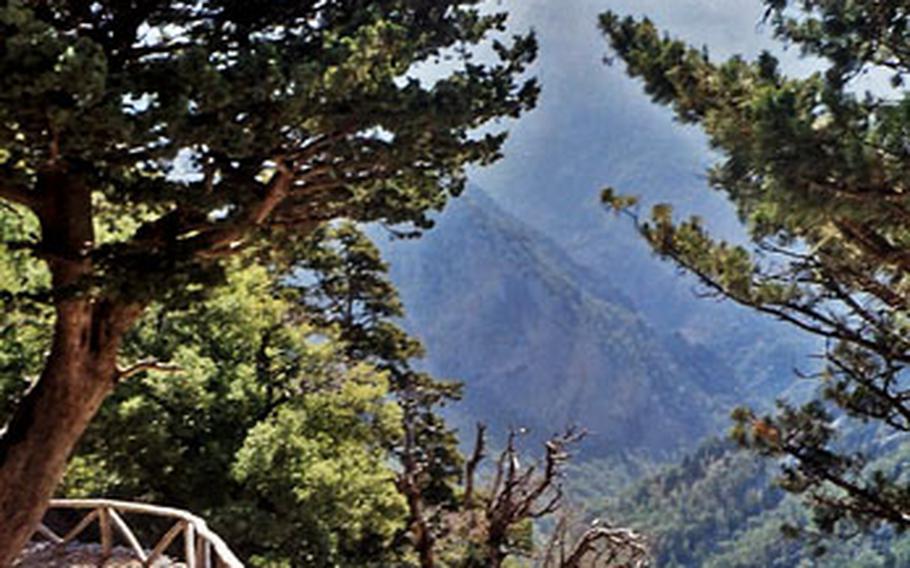 The northern terminus of the Samaria Gorge trail in Crete offers stunning views. Take sturdy shoes —the first leg of the trail zigzags as it drops more than 3,200 feet in the first mile or so. (Kevin Dougherty / S&S)

The northern terminus of the Samaria Gorge trail in Crete offers stunning views. Take sturdy shoes —the first leg of the trail zigzags as it drops more than 3,200 feet in the first mile or so. (Kevin Dougherty / S&S) 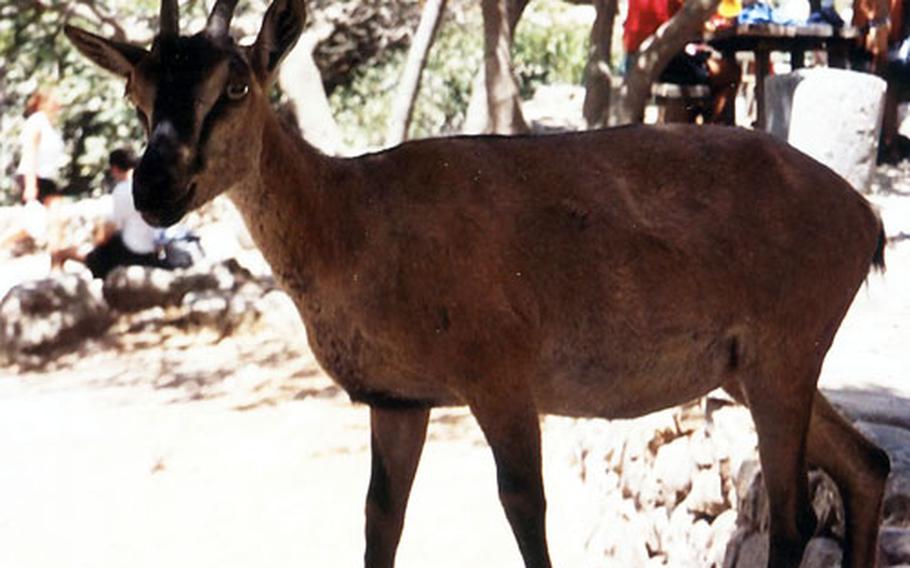 A popular Samaria Gorge sight is a Kri-kri, a wild goat unique to the Greek island. (Kevin Dougherty / S&S) The beginning of the walk through the Samaria Gorge is the steepest. Walkers must get from an altitude of more than 4,100 feet down to the riverbed that runs through the gorge. (Kevin Dougherty / S&S) Unlike most destinations highlighted in this space, the Samaria Gorge on the Greek isle of Crete is not a place folks visit on the spur of the moment.

But a walk through the gorge is a great adventure for those stationed at Naval Support Activity, Souda Bay, located about an hour away, or anyone visiting Crete.

&ldquo;If you come here, you have to do it,&rdquo; said Russ Crane, an outdoor recreation specialist at Souda Bay.

There are multiple reasons. For starters, it&rsquo;s a challenge that is doable, providing you wear proper shoes, stay hydrated and set a reasonable pace. The 10-mile walk through the gorge to the seaside village of Agia Roumeli takes four to seven hours.

Secondly, the view is something to behold. Whether it&rsquo;s Cretan cypress trees, the fantastic flora, wild goats or the &ldquo;Iron Gates,&rdquo; where the gorge narrows to about 13 feet, there is much to see and photograph.

Lastly, islanders and tour operators are fond of saying the Samaria Gorge is the longest in Europe. That&rsquo;s a stretch, since the Gorges du Verdon in southern France beats it by two to three miles.

Despite the inflationary talk, walking the Gorge is a good stroll.

&ldquo;Walking in western Crete is very, very challenging,&rdquo; said Chief Petty Officer Burt Crapo, a Souda Bay meteorologist. &ldquo;There are a lot of rocks that are eager to roll on you and ruin your day.&rdquo;

The key to preventing that is preparation and pace.

Many hotels offer bus trips that drop walkers off at the starting point and pick them up at the end. For those on their own, there is parking with a snack bar and restrooms at the trail head, located south of the town of Omalos.

All but the last two miles of the trail lies within the Lefka Ori National Park. The hike starts at an altitude of more than 4,100 feet and ends at Agia Roumeli in southern Crete on the Libyan Sea.

The first mile is all downhill. The path zigzags &mdash; hikers should take their time because the stones underfoot can be slippery come rain or shine. Visitors pass cypress, oaks and various types of coniferous trees that thin out as the trail nears the riverbed that cuts through the gorge.

On the floor of the gorge, hikers pass signs of abandonment, from the tiny chapel of Agios Nik&oacute;laos to Samaria village, where the Cretan wild goat, called Kri-kri, like to roam. Along the way are several places for walkers to rest and get water. There also are first-aid stations.

The highlight of the trip is the so-called &ldquo;Iron Gates.&rdquo; The gorge&rsquo;s narrowest point is where visitors pause for photos and look around, mostly straight up at the towering walls. From here, the end is a few miles away.

Some tour guides will share mythological tales associated with the gorge, stories involving such Greek gods as Apollo. They also warn people about the proper foot attire. On a recent trek in August, the hottest month, some undertook the walk in leather-soled shoes.

At such a sight, one can almost hear the sure-footed Kri-kri laughing.

On the QTDIRECTIONS: Driving from the Crete capital of Iraklion to the Omalos plateau, just north of where the trail begins, takes a couple of hours. From the town of Omalos, follow a winding, mountain road to Xyloskalo and the park entrance. From Naval Support Activity, Souda Bay, the trail head is about an hour away.

TIMES: The gorge is closed from November to early May due to seasonal rains. In-season tour buses arrive at midmorning to give people time to walk the gorge and still catch one of the ferries. Late starters may have to spend the night in Agia Roumeli, a cozy seaside town.

COSTS: Organized tours run $40-$50. Fees typically include round- trip bus service and a ferry boat ride from Agia Roumeli, where the trail ends, to Hora Sfakion, where tour buses wait. Entry fee to the national park is 5 euros for adults, free to those under 15.

FOOD: Snacks are available at the trail head. On the southern edge of the park is a shaded outdoor cafe and gift shop.