Crete: Cemetery holds remains of Germans killed there during WWII 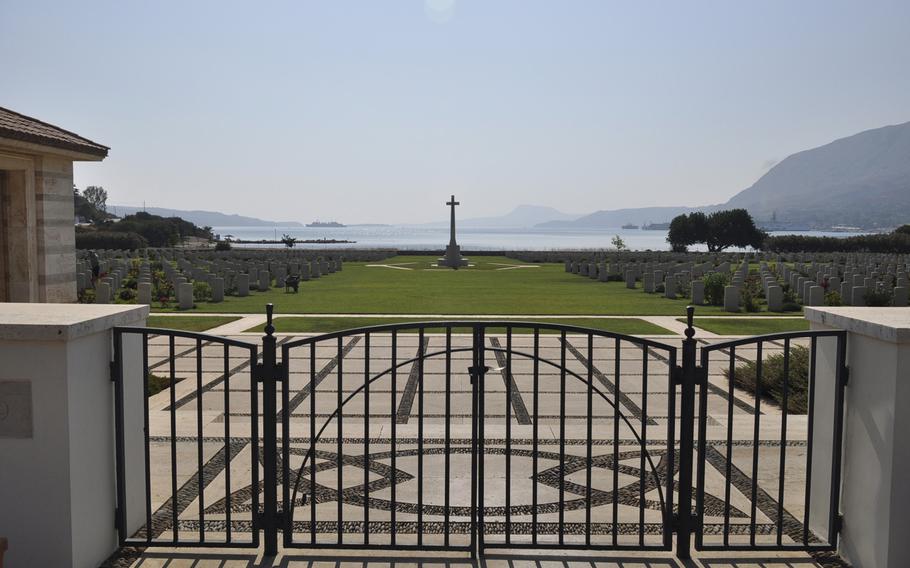 The Souda Bay War Cemetery holds the remains of some 1,500 Commonwealth troops from the U.K., Australia and New Zealand who defended Crete during the German invasion in 1941. (Steven Beardsley/Stars and Strip)

The Souda Bay War Cemetery holds the remains of some 1,500 Commonwealth troops from the U.K., Australia and New Zealand who defended Crete during the German invasion in 1941. (Steven Beardsley/Stars and Strip) 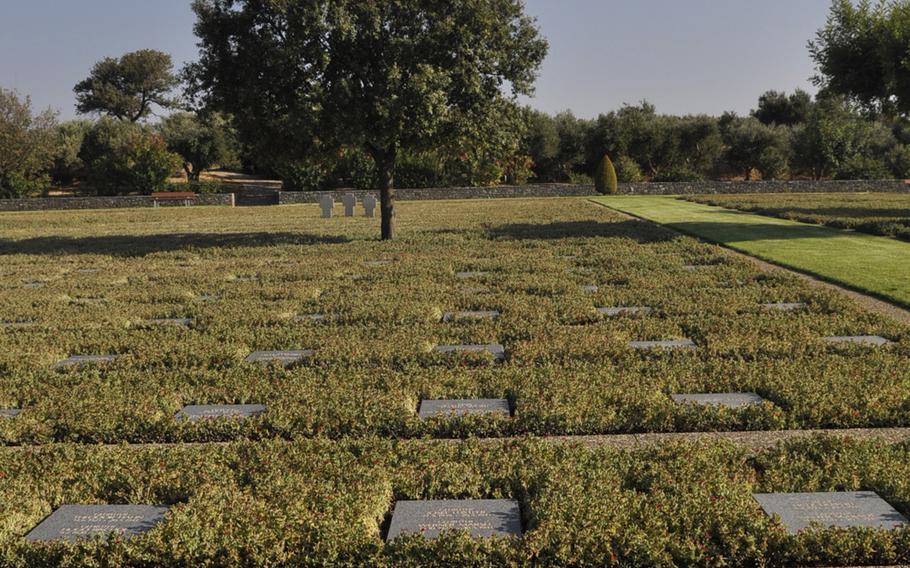 The remains of nearly 4,500 German troops killed in World War II in Crete rest in the German Military Cemetery of Maleme in Crete. Most were killed in the Battle of Crete in May 1941. (Steven Beardsley/Stars and Stripes) 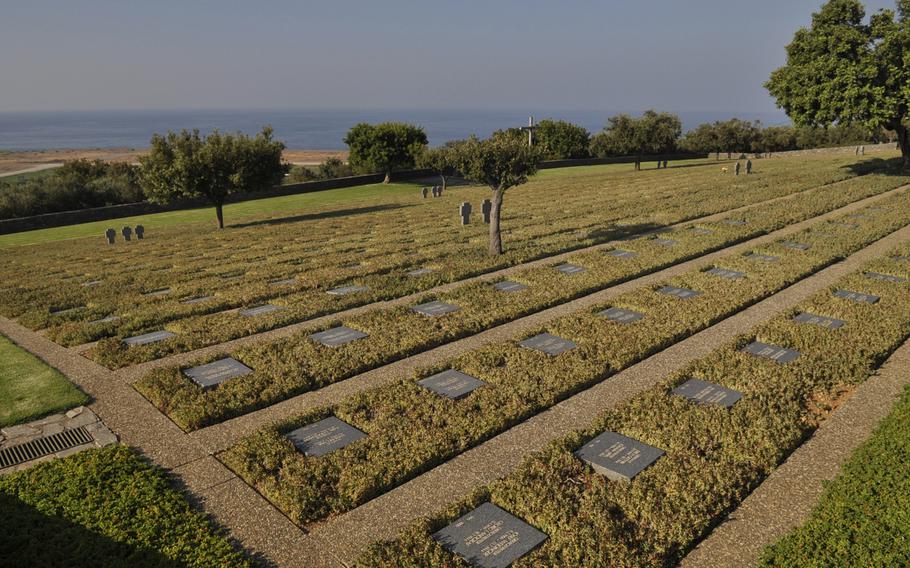 The German Military Cemetery of Maleme, near Souda Bay in Crete, overlooks over the blue waters of Chania bay. (Steven Beardsley/Stars and Strip) 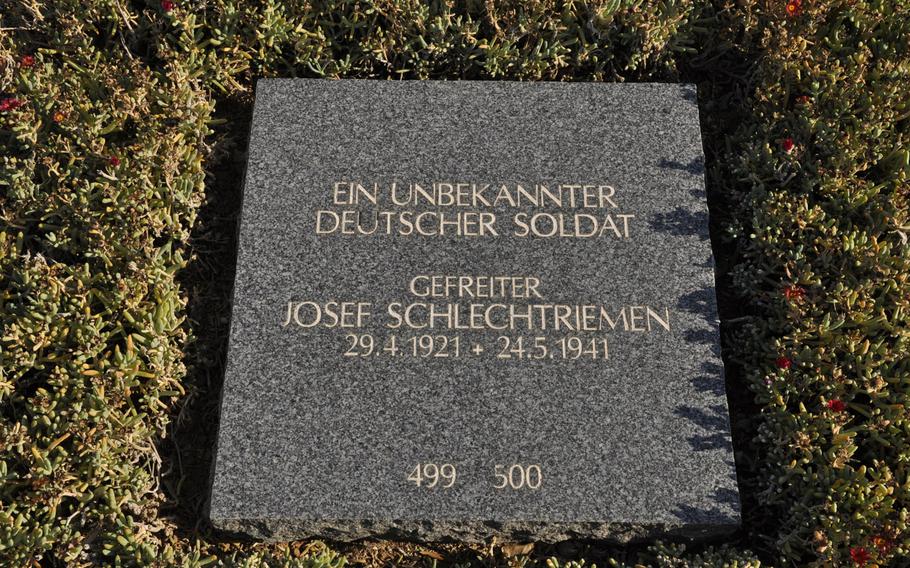 A gravestone at the German Military Cemetery of Maleme, Crete, marks the remains of two German troops: one an "unknown German soldier," the other identified. The challenge for cemetery planners was how to recognize the dead without appearing to condone the Germans' actions, which caused so much suffering during the war. (Steven Beardsley/Stars and Stripes) 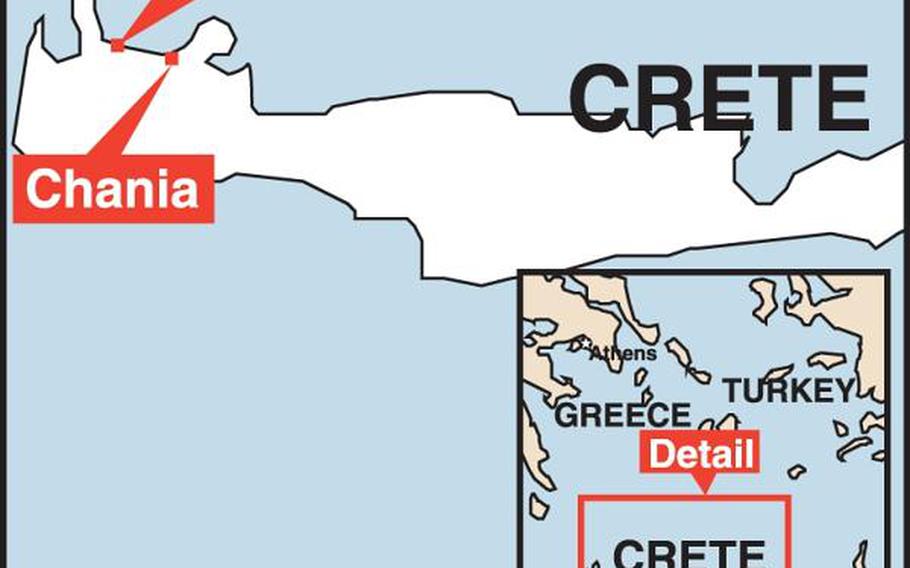 Easily obscured by the ancient history of this rocky Greek isle is a more recent chapter being hashed out by the families of those who lived it.

It can be felt at a small war cemetery in the coastal city of Maleme, some 6 miles from the city of Chania in western Crete and not far from the U.S. naval base at Souda Bay. There, in a signature book near the entrance, are some revelations — one visitor found her great-grandfather among those buried, she wrote. Another family discovered the close friend of their relative. Several visitors apologized that their countrymen were ever on this island.

This is the German War Cemetery at Maleme, a burial ground for nearly 4,500 soldiers of Nazi Germany and one of a few sites across Europe that quietly remember the aggressors of World War II. Unlike the island’s older history, also marked by bloody conquests and fighting, this one feels fresher.

It was only 72 years ago, on May 20, 1941, that German paratroopers filled the sky above Maleme, aiming to take the nearby airfield and pave the way for a larger assault force on the island. Crete was crucial ground for Germany, which needed to deny the British space to launch air attacks and disrupt Axis shipping in the Mediterranean.

Dubbed Operation Mercury by the Germans, it would meet stiff but fading resistance by the countries of the British Commonwealth — an ensemble of roughly 42,000 British, Australian and New Zealander troops — who were supported by local Cretans.

The Allied forces fled by ship convoy after days of fierce fighting, ceding the island to German forces in the hope of saving numbers for a future fight. Some 15,000 were still taken prisoner, and many of the 8,000 Cretans killed in World War II died at the hands of Germans after the battle as punishment for supporting the Allies.

The challenge faced by cemetery planners in the 1970s was how to recognize their dead without appearing to condone their actions. It’s a difficult balance even today (earlier this year, a German public television miniseries was criticized for its miniseries depicting the lives of several young Germans in the war).

The war cemetery in Maleme strives merely to acknowledge the soldiers as individuals, and identify them by name where possible. Their motives are largely left to the visitor, save for a few highlighted narratives.

One is the story of Jürgen Friedrich Rothert, the son of a district official with plans of becoming a farmer. Despite his angst over the Nazification of Germany, he came to enjoy the comradeship of conscripted service in the army. He died during the initial jump on May 20 after landing in previously undetected enemy territory.

The exhibit doesn’t shy away from the darker notes of the German invasion, including the backlash against Cretan supporters of Allied forces. It also notes one of the more notorious graves in the cemetery, that of the commander of German forces in Greece, who was executed following a trial in Athens after the war.

Despite their broader motives, the Germans’ strategy of taking Crete was seen as a sound one. Long vied for by militaries with global aspirations, it remains prime real estate for its access to Europe, the Middle East and Africa, as well as its deep-water harbor in Souda Bay.

Just south of the U.S. base, in Souda, is another reminder of the price countries were willing to pay to hold onto the island. The Souda Bay War Cemetery holds the remains of 1,500 Commonwealth soldiers killed defending the island.

Times Both cemeteries are open year-round.

Food A small cafe sells drinks near the entrance of the cemetery. Restaurants, tavernas and supermarkets are abundant along the Old National Road.